The thing for me is that Bleach never really had a "win state" until Azien came up, at which point the "win state" became beating Azien which was never was really followed though with. This gives the series no clear end goal to feel "finished" when that goal is reached.

Naruto's "win state" is blatantly stated in the first oh, twenty pages of the manga; Naruto wants to be Hokage. The only questions is why he wants that and how he's going to accomplish it as at the beginning of the series nobody thinks he can do it. These questions form the driving force of the manga and bring a satisfying end to it when it turns out that Naruto really does become Hokage and for all the right reasons. The thing is that's what the main character has been wanting since Ch. 1.

With Bleach, I never got the idea that taking over his dad's clinic was something even on Ichigo's mind throughout the entire series (if anything, he attitude is the opposite). It literally feels like it came up out of nowhere.

I don't know, I just feel like Kubo has just done what he's wanted to with the series over the years without regard for the characterizations he's given his characters and nothing makes or breaks a story like good/bad characterization does. So when an author is sloppy with it, it feels like the whole series is sloppy which is kinda how I feel about Bleach as a whole.

Also, while, I actually kinda did enjoy the final battle, it did seem rather short for the final battle of a fifteen year manga. I'm also not sure how Yhwach failed to foresee Uryuu's arrow piercing him. Maybe still silver represents a blind spot in the Almighty? Seems plausible, but who knows? Kubo, I suppose, but he didn't put the answer in the manga, so there you go.

Rushed messy ending aside, I find that I still like this blood war arc as a whole. It had an incredibly strong start, and didn't really start developing issues until around the Mask fight imo. It did have a number of issues pop up from that point, but I don't think it ever got bad, and there was plenty of cool stuff in there as well, including some good fights, cool character designs, and even some occasional, if underutilized character developement . I probably still prefer the arrancar arc overall, and the Soul Society arc remains the best arc from a storytelling standpoint, but I still like this arc. I'd call it a 6.5 out of ten. I'd bump that up to a 7 if the ending were a bit more fleshed out.

I guess the future of Bleach is a bit shaky now. We've got word of a live action movie which pretty much nobody wanted, and no news of the return of the anime, which most fans would have greatly preferred over the live action movie. Some might think the anime won't return at all, which seems reasonable given the rushed ending the manga received. I'm in the camp that think Shonen Jump made Kubo finish earlier than he originally planned, and if thats true it seems unlikely that they'd green light a new anime series.

However, I think there is a chance for the anime to return, and its thanks to the live action movie, funnily enough. I see one of two possible ways for this to happen.

1. The anime is brought back in order to generate hype for the new movie.

2. If the movie does well upon release it would show that Bleach can still bring in money, and thus a new anime might get made.

I'd prefer the first option, but option 2 seems more likely. Hopefully if the anime ever does return we can get a more fleshed out ending there.

Either way, for the time being at least, its time to say goodbye to Bleach. Its been a hell of a ride, and I'm sad to see it done. I'll be back for the live action movie, though my expectations are low, and if the anime ever comes back I'll be all over it, but until then, sayonara Bleach.

Bleach is getting two light novels: 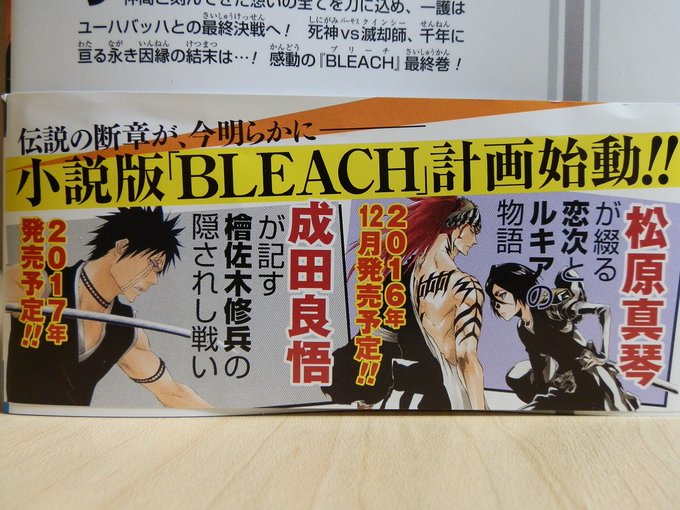 One will be a Hisagi novel by Narita Ryogo. Narita is the guy who wrote the Spirits Are Forever With You and The 13th Blades novel. He is also the author of Durarara and Baccano. The other novel will be a RenRuki novel by Matsubara Makoto. He wrote a Short story in the Unmasked book, Letters From the Other Side, The Death Save the Strawberry and The Honey Dish Rhapsody.

I did go on over to the Beach forum I used to frequent a few hours before I saw this; evidently Bleach is getting 'remixed' i.e., they're re-releasing the series over a period of time with new covers and such.

It got a few people freaked out, thinking that Kubo was somehow leaving SJ and going to fix the botched ending of his series, but given that they've done the same 'remix' thing with Naruto, it's doubtful that will happen.

Cover of the first BLEACH light novel. The book releases on December 27th. 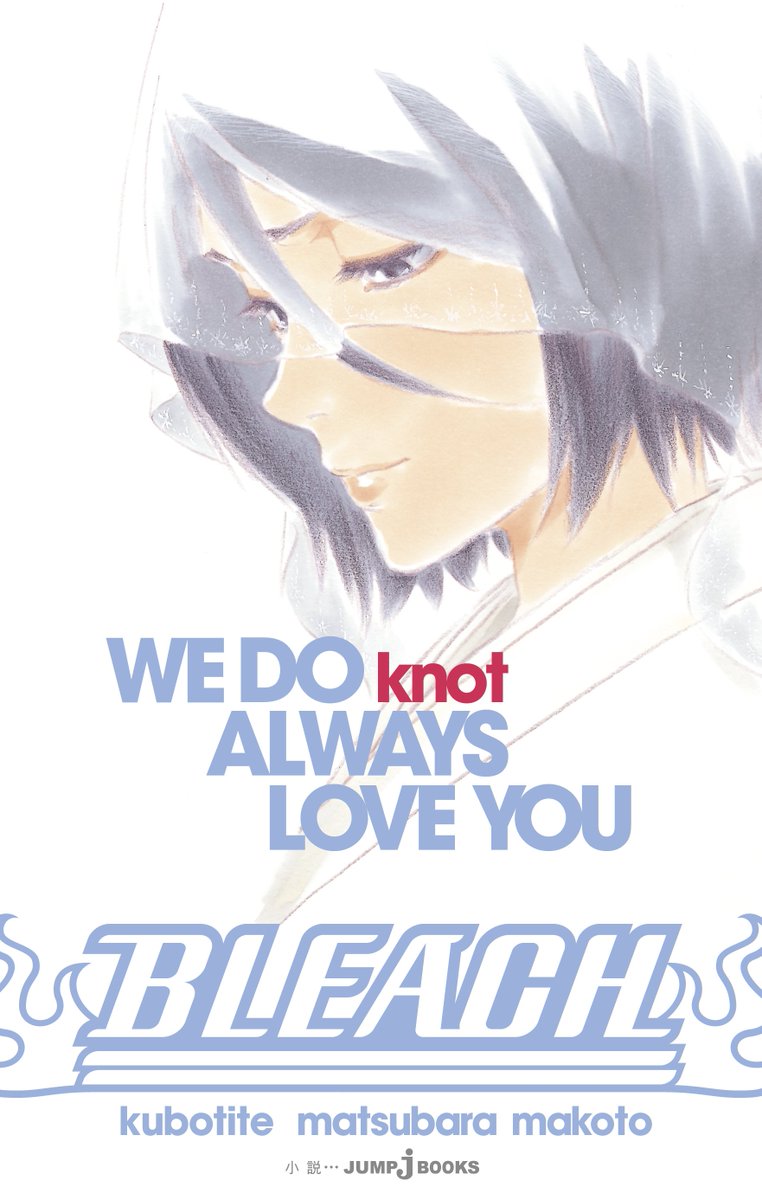 As a preview they released the prologue and chapter 1 online. Raw text here.

Fan translation of the Prologue and Chapter 1.

Synopsis of the above if you don´t want to read it all.

Bumping this thread cause I found this interesting:

The official website for the live action movie revealed its first key visual:

I saw that earlier today. *sigh*

After that botched ending to the manga we get a live-action film that nobody asked for...

Found this simple video and made emotional AF, I miss the anime's creative episode title cards a lot.

Oh man. I just wanna go watch all of these things again.

I forgot it, yesterday marked the first year since BLEACH ended, it still didn't feel that long to me.

I think I'm going to reread the manga/watch the anime again. I was feeling very nostalgic for the series this morning at work, listening to clips on my phone before we opened. I want to go back and remember what made Bleach so good in the first place, and why I fell in love with it.

I just added it to my Netflix queue yesterday because the opening music got me all nostalgic.

#1,439
lithiumkatana17 said:
I think I'm going to reread the manga/watch the anime again
Click to expand...
I keep saying this too, and then Darth lightly rolls his eyes and laughs, because I just barely finished it all. But I can't help it. I'm trying dudes, really trying, to get into Naruto, but I just can't. It doesn't fill the Bleach shaped hole in my heart.

I wouldn't put down Naruto until at least the Wave Arc as that's when one of the most important themes in the entire manga is brought up. The further you can get past that, the better it gets. The only arc that is kinda a slog to get through is the Tournament Arc and even then, there's so much character development/introduction and worldbuilding that the rest of the manga runs on in that arc that it's worth paying attention to. And then Akatsuki gets introduced and the manga never really slows down again

Obsidian Fire said:
I wouldn't put down Naruto until at least the Wave Arc as that's when one of the most important themes in the entire manga is brought up. The further you can get past that, the better it gets. The only arc that is kinda a slog to get through is the Tournament Arc and even then, there's so much character development/introduction and worldbuilding that the rest of the manga runs on in that arc that it's worth paying attention to. And then Akatsuki gets introduced and the manga never really slows down again
Click to expand...
I actually watched the Naturo anime through the Chunin exams, and then used that to catapult myself into binge-reading the manga just before the Search for Sasuke arc (and then kept reading it weekly for a decade), and I think it really helped to get to know the characters and have internal voices for them, etc.

I basically jumped from anime to manga with Bleach and Naruto at close to the same time, and watched both of them until they hit filler arcs. Lots of nostalgia for those times.


Also: Is the Bleach Hell movie any good? I saw that it was on Netflix, and remember that Hell was one of the earliest concepts that I was SUPER intrigued by in Bleach that never really got dug into too deeply in the manga.

Best animation out of the four movies.
Best fights
Probably the best movie villan (that said the bar was never that high)
Hell is a pretty interesting place.

Now this negative is a big YMMV but I personally felt it was very lackluster in the emotional department.

I watched it a couple years ago iirc and, from my memory, I thought it was enjoyable to watch. The best part is how it sheds light on Hell, which is never really delved into in the manga and anime. So if you want more lore then you'll probably enjoy it.

I'd watch the Hell Verse movie just for the damn score. Shiro Sagisu is a damn music god.

I think the DiamondDust Rebellion remains my favorite Bleach film though.

If you ask me I would rank the movies like this:

Memories of Nobody: It might have the less visually impressive animation of them all and the weakest villand too but it singlehandly has the most powerful gutpunching emotional story of all the BLEACH movies as well the best movie only character of them all (Senna). It holds the feat of being the only BLEACH movie that made me cry by the end credits (Fade to Black came close). 8.8/10

Diamond Dust Rebellion: Less favourite of them all, mostly because I'm not a big fan of Toushiro (I like him just enough as a character). I personally liked the twin Hyorinmarou idea. The second weaket villan in the movie series. 6.5/10

Fade to Black: My second favourite bleach movie, mainly because it has Rukia as a central character. This movie has second best villans (Again the bar was never high). The bond between Rukia and Ichigo and what them meeting meant in the grand scheme of things is what makes the movie good. I have very mix feelings with the parasite hollow thing. 8/10

Also, as a result I watched the first 5 episodes of Bleach & the first episode of Naruto and she's absolutely in love with them. My life is a wonderful wave of nostalgia and happiness.

As many of you may or may not be aware of, post manga ending (as the time of this writing) two novels have been released, these being: WE DO knot ALWAYS LOVE YOU and Can't Fear Your Own World


The former is already fully translated and the later is yet to be finished but there're already a bunch of chapters translated.

And for the the lazy, here is (an incomplete) TL;DR of Can't Fear Your Own World (which provides conclusion and answer to many questions left unanswered) :

Do you know if there are any plans for these novels to be officially translated?

At the moment there're no plans for an official translatoin and probably they will remain as Japan only...

Figures. They're not written by Kubo, so no rush or urge to translate them for an American audience. Although I was displeased by the way the series ended, I wouldn't mind reading these.
You must log in or register to reply here.
Share: Facebook Twitter Google+ Reddit Pinterest Tumblr WhatsApp Email Link
Top Bottom