A hobby of mine is going web spelunking, where I browse old sites from when the internet was a lot more decentralized and community-driven. This style of website is important to me - it represents a time when people devoted to their hobbies would create resource-heavy websites that people could congregate around. Each site has its own individual flare and expression.

So basically, I thought I'd make a little library of some of them here. I've gathered links of these sites. Because web archive can't archive everything, there's no consistency with how thoroughly the links on these sites work. Some work better than others. Try 'em out, and if they don't work...just enjoy the homepage, lol.

Each webpage has a link with a snapshot of the archive below it. The snapshots were taken on a modern 16:9 screen ratio, so they might not be totally accurate. I may go back and take them on a 4:3 monitor when I get the chance, as well as adding some descriptions. Or more sites.

Ring of the Ancients - Archived Link (note: I haven't been able to access any of the sites in the web ring. Throwing it here for good measure, though)

Rufus' Final Fantasy7 Ring - Archived Link (note: I haven't been able to access any of the sites in the web ring. Throwing it here for good measure, though) 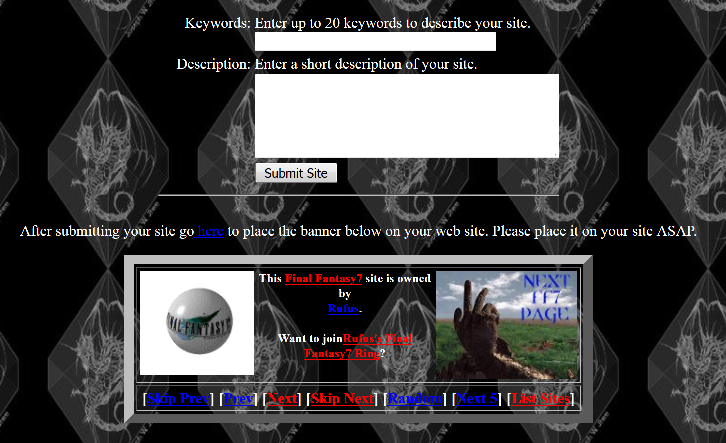 Whoooooooa this is more nostalgic than the remake lolol. FF Insider and Final Fantasy Spirit were definitely some of the websites I frequented back in high school, along with Icy Brian, FF7 Citadel, and Final Fantasy Worlds Apart. (I also visited Eyes on Final Fantasy but the website is still active and looks nothing like it did back then — it has MOBILE support ffs XD)

That is quite the little nostalgia bomb you've got there.

Mr. Ite said:
Icy Brian
Click to expand...
What? All these years, I don't think I ever realized you were there too. Who were you?

I loved FF Insider, that was one of my first FF sites I visited frequently. This is amazing, thank you so much for sharing.

#5
Thank you for this thread! I am also an internet "nostalgist."

A number of these look familiar to me, especially FF Insider and FF7 Citadel. I'm pretty sure I've used those latter two sites. I miss those little guestbook fansites, even though they were slightly dated in 2006 when I started using the internet heavily. I also enjoyed my fair share of LJ, numerous fan forums (subreddits are not a true replacement!

Does anyone else remember that one Final Fantasy music website called Lagoon.. something? Or Blue something?

Rufus' Final Fantasy7 Ring - Archived Link
Click to expand...
Wait, was the owner actually named Rufus? I have only encountered an actual person with this name once in my entire life.

The Twilight Mexican said:
What? All these years, I don't think I ever realized you were there too. Who were you?
Click to expand...
I’m always Mr. Ite although I lurked more there. My forum of choice back in the aughts was Final Fantasy Force 3 (an MSN group) and later the Genesis Awards. Sorry to disappoint!

Ryvius said:
Does anyone else remember that one Final Fantasy music website called Lagoon.. something? Or Blue something?
Click to expand...
Was it BlueLaguna.net?

#8
The Twilight Mexican said:
Was it BlueLaguna.net?
Click to expand...
Yes!

#9
Wow, isn't that a blast from the past! I remember checking out FF7Citadel quite a lot back then, it was one of the few sites with abundant info and resources about the game. And I think I visited Final Fantasy Spirit around the times of Advent Children, years later.
I recall that information was quite scarce, only a handful of fan sites would have detailed background screens, walkthroughs, enemy stats, etc. I don't think there was an official site (I think that Squaresoft's website barely existed). It was funny that there were so many rumors about quests that didn't exist - a lot of them were about reviving Aerith, of course. People were also wondering about alternate endings (I even tested one of these theories by attempting to lose the final duel between Cloud and Sephiroth, which you can't

).
It really did feel like a pioneering period, at the time.

#10
Oh man I miss those old rough and ready days. Everything is too slick nowadays for my tastes.

It's glorious that some of those sites are still accessible, but sad that the fanfic links are broken. Some lost masterpieces there.

#11
For some reason it really amuses me how many of these old FF sites have random advent children screen shots as part of their banners.

#12
Talk about a blast from the past! I remember many of these sites - FF Spirit, FF Insider, The FF - as well as others like FF Online and Total FF. Never knew you were at FF:WA, Ite! What was your username there? I went by Axwind back then. Kinda sad that so many of those old sites are just empty now. We still have our memories, though.

Oh and does anyone remember a Geocities FF7 site called Shinra No. 26 run by someone who called himself the Captain (aka Cid) and who put together all kinds of CG images of the whole FF7 cast using bits and pieces of existing footage from the FMV's and renders of FF7 and other games?

It MUST be a thing

#13
OOF. Right in the nostalgia. I typed my old site's URL into the wayback machine, and found a MIDI player browser extension... I haven't heard those wonderfully terrible synth notes in SOOOOO LONG. I've never used it before, thanks for introducing me!

I used to visit two japanese pages back in the day. The author of one seems to have stopped posting, while the other rarely ever does. Plus, i can't understand what they write unless I use a translator, and we all know how well they go. but their fanart is so pretty!!