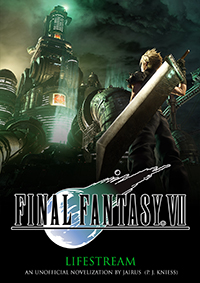 ​
This is, as the thread title says, a novelization of Final Fantasy VII. But it takes a different approach from most, as you'll see when you start reading. And as for whether it fits into the Compilation canon or not, well that's really up to you. I'm writing it in such a way that it could be seen as either being part of it or not, whichever the reader prefers. There are some references, but I make them vague enough and indirect enough that they could just as easily work without the Compilation as with it. This way, those who like the Compilation can see this story as part of it if they want, and those who don't can see it as its own thing. Oh, and you'll find nods to the remake scattered here and there throughout the story as well. I'll also do my best to get chapters up on a fairly regular basis.

I hope you enjoy it, and any feedback/CC/etc. is always welcome. Thanks! 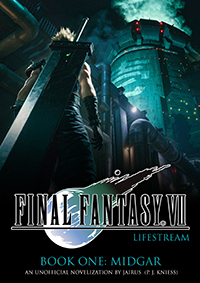 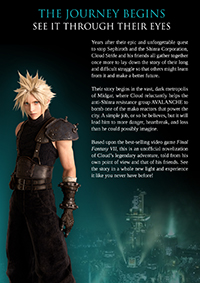 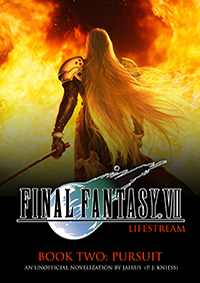 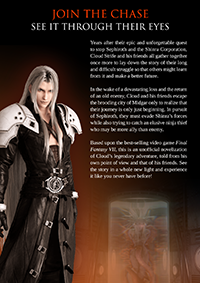 Legal silliness: I don't own FFVII or any of its characters, places, etc. That all belongs to SE. I'm not affiliated with them, and this is an unofficial fan work created solely on my own. And no chocobos were harmed in the writing of this fic.
Last edited: Feb 1, 2020

#2
Got the story up on fanfiction.net now, so check it out there if you like, the links are in the first post.

Looking great so far! Keep up the good work!

#4
Mr. Ite said:
Looking great so far! Keep up the good work!
Click to expand...
Thanks, I intend to! Glad you like it!

#5
Got the story up on AO3 now as well, and Chapters 3 and 4 are now available too! Enjoy!

#8
Got Chapter 8 up now! Full credit to Vyzz for the bit with Aerith and the sign, as it was originally his idea, but I liked it so much I decided to include it. I hope you guys enjoy the chapter!

#9
Chapter 9 is up! The secrets of Jessie's mysterious past are finally revealed, so go check it out!

#12
In addition to posting Chapter 11, I've also gone and redone all the PDF's to make them more readable and in a more novel-style format (A5 page size, different font, etc.), so I've made minor revisions in each chapter to account for the change in formatting. They should be much easier to use now, and more printer-friendly, too. I hope guys like them as well as the new chapter! Feel free to post your thoughts! Thanks!

#13
Chapter 12 is up now! The second half of Cloud's adventures in Corneo's mansion, plus more! Also, I forgot to mention it last time, but if any fan artists are reading this story, would you be interested in making a rendition of Wall Market Jessie? Cloud wondered in the last chapter what she'd look like in an outfit like what Tifa and Aerith had, and it might be interesting to see what people come up with. I even know what her threat to Corneo would have been, had she been there:

Of course, if she had been there, then Cloud might not have had to go undercover as a girl and that section wouldn't have been nearly as much fun. But, Cloud being Cloud, he might still have done it since he seems to be very protective of the girls around him. Oh, well. And by the way, see if you can spot the FFXIII reference in this chapter!

#14
Just posted Chapter 13, so be sure to check it out! I'm not superstitious or anything, but I find it funny the events in here just happened to end up in Chapter 13 of all the numbers it could have been. It was not at all intentional, but it's kind of amusing that it turned out that way. Talk about bad luck for VII's crew. Unlucky number for an unlucky part of the story, lol.

#15
Chapter 14 is up! The second half of the Sector 7 plate collapse and the fight with Reno as well as a few surprises, so don't miss it!

#16
Finally posted Chapter 15! Sorry for the longer wait, been busy with work lately (end of the month is busier for me than the first half, just the nature of my job). I hope you'll agree it was worth it, though, once you read the chapter. The aftermath of the plate collapse, with a new scene toward the end before the trio embarks on their rescue mission (which will begin properly in Chapter 16). Enjoy!

#17
Chapter 16 is up now! The quest to save Aerith begins, and so does the path toward the end of Book One, which is only a few chapters away now. I hope you guys like it!

#18
Just posted Chapter 17! The infiltration of Shinra HQ continues, with battles, puzzles, unexpected help, and more! Check it out!

Just wanted to say I'm (slowly) reading through your work via Ao3 and left you a comment on there previously (we chatted).

Didn't know you were on here, but it's good to see you! I remember you from AO3, yeah. I hope you like what you've read since we last chatted!

Jairus said:
Thanks, Sailor, and I will!

Didn't know you were on here, but it's good to see you! I remember you from AO3, yeah. I hope you like what you've read since we last chatted!

Click to expand...
I finally made an account after E3, and I post at random due to my Remake hype. It's definitely cool to have a forum to go to and get hyped about the excitement

(There's a Discord I gush over Remake with some friends, but it's just not the same as me being an old fangirl that prefers forums.)

I definitely have enjoyed things so far! Hope to continue the rest soon and leave you some feedback (gotta love backlogs, hah).

#22
Glad to hear it! Yeah, I like having a forum home again, too. Used to be FF:WA way back in the day many, many years ago before it became a ghost town. Went by a different name back then. Anyway, I should have another chapter up soon, TGS FF7R hype helps me stay on top of it, hehe.

#23
Chapter 18 is up! Venturing into Shinra's Science Division, discovering Jenova, battling SOLDIER, rescuing Aerith, finding a new friend, and a lot more! I hope you all like it!

#24
Got Chapter 19 up now! I actually wrote this chapter before the TGS trailer for the FFVII Remake came out, and when it did and I saw a certain shot, I was surprised and excited to say the least. It looked like it had come right out of a certain part of this chapter - you'll know it when you read it. I know the scene in the trailer where the shot came from has different things going on than in my chapter and it's not really the same, it's just the look of it that so stunned me, like it was a piece of my story that had just come to life. I know it wasn't, it was just a nice, fun coincidence is all. But it still amazed me nonetheless. I was like "WHAAAA!!???" Anyway, here's the shot I'm talking about: