Final Fantasy XV (was Versus XIII) 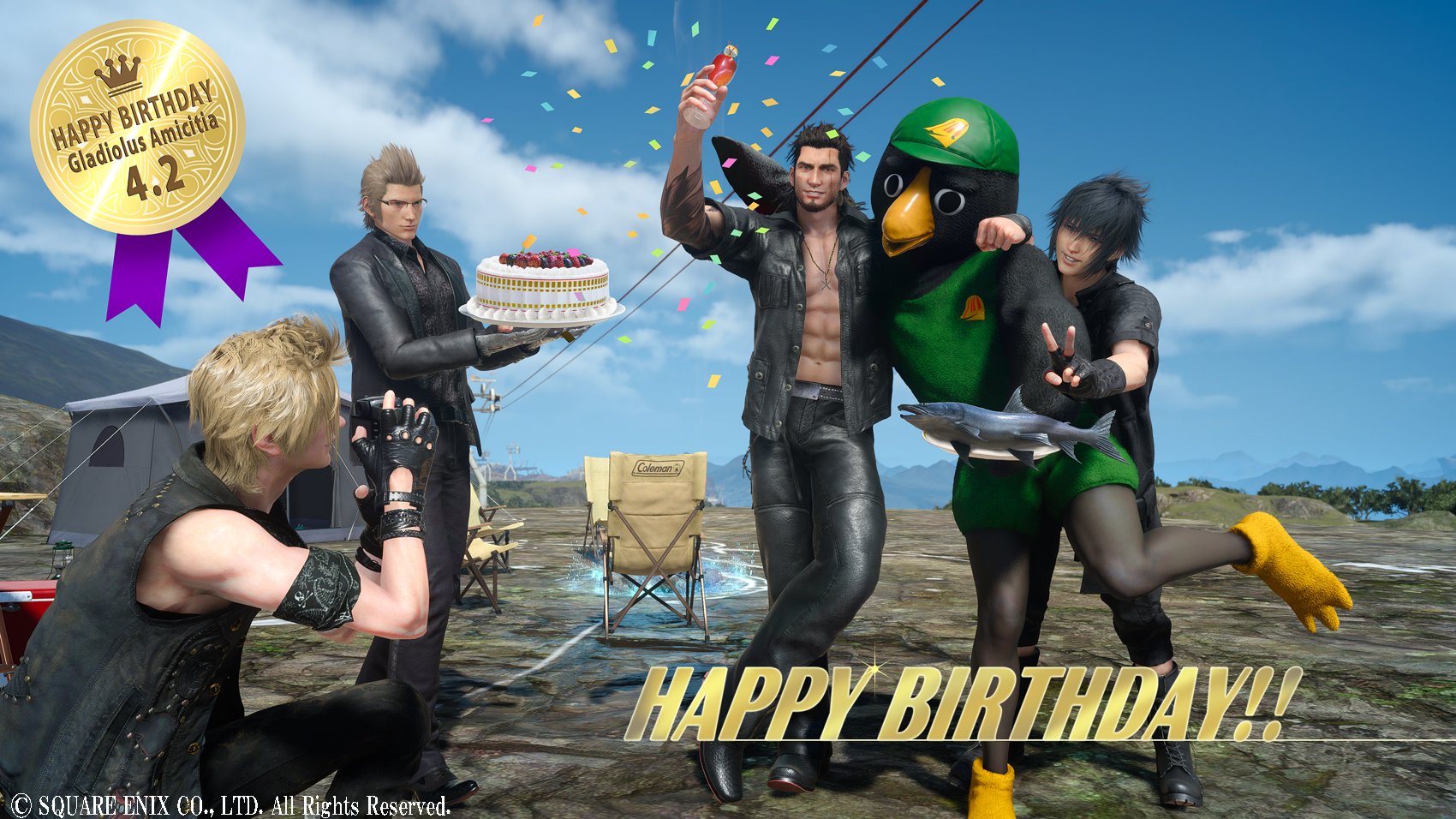 I'm on chapter three right now and I'm getting so lost in the game. I now get it when people were saying it wouldn't be so easy as playing through the main story because THERE ARE SO MANY FUN SIDEQUESTS TO DO.

As a sidenote, I'm so impressed with how you can listen to the music from the entire FF series in the Regalia and on the go <3

Damn, I'm surprised that Ignis beat out Prompto on that list of favorites. I guarantee that if he
hadn't lost his sight towards the end of the story Prompto probably would have beat him.
And Gladio comes in almost dead last. That's a shame. Too bad his DLC won't be doing much to change that.

^Eh I was always more fond of Prompto and Iggy

Flare said:
^Eh I was always more fond of Prompto and Iggy

Would anyone with a save from right before the final battle be able to do me a favor or two?


When Noctis is selecting the photo to take with him to the afterlife, the crew will make various comments as he looks through them. I'm trying to track down a couple that I know I've seen in videos before, but I can't find them now for the life of me and am hoping someone will be able to either take a video or grab some screenshots.

If you select a photo of Ardyn (actually select it like you're going to pick it, not just view it), Gladio will say something like "Heck of a choice. Guess a king forgives and forgets." I don't think this can be done with the generic photo of Ardyn in front of the Disc of Cauthess (the one that everyone gets), though. Generic photos seem to elicit generic responses (e.g. Prompto won't get excited about a picture of Aranea if it comes from a cutscene).

I'm also trying to find the comments for a landscape photo. Noct will say something about liking it even though there's no one in it, and then someone (Ignis, I think) will comment that it must have some significance for him if he likes it without anyone in it.

Any help would be appreciated. Thanks a much!

Jason Tandro said:
Miscellaneous Shots
Gladio: So this is it? No regrets?
OR
Prompto: I'm sure it's hard to settle on just one.
OR
Prompto: That the one you want?
Ignis: This is it. Listen to your heart, Noct.

Shot of a cutscene or stock moment
Prompto: Really takes you back huh? Makes you think of all that came before and after.
Ignis: The pictures of those days are still fresh in my mind.

Shot of a battle
Gladio: That was a real knock-down, drag-out rumble.
Ignis: We conquered insurmountable odds on many an occasion.

Shot of just Gladio (or Noct and Gladio)
Gladio: Uhh, it's just me in this photo. I mean don't get me wrong, I'm flattered and all.

Shot of just Prompto (or Noct and Prompto)
Prompto: Ah... uh, you sure you want a picture of just me buddy? It's sweet and all, but a little bit creepy.

Shot of just Ignis (or Noct and Ignis)
Noct: I'll take... this one with Iggy in it.
Ignis: Was I not present in the majority of photographs?

Shot of just Noctis
Prompto: This one? Go figure. The guy who hated having his picture taken wants a shot of just himself.
Ignis: You can really see the change.

Shot of only 2 or 3 of the boys
Noct: (chuckle) This one's a classic. It really takes me back.
Ignis: Easy to get lost in all the memories we've shared.
OR
Gladio: The more I look at it, the better it looks.

Shot of Cor
Gladio: Oh man. Cor really showed us the ropes when we were first starting out.
Ignis: Indeed. It was always reassuring knowing that the Marshall was in our corner.

Shot of Aranea alone - or focused on Aranea (possibly Cindy too but doesn't work with stock Cindy photos)
Prompto: Ohhohoho, I totally know where you're coming from dude.

Shot of side characters
Gladio: That really stuck with you huh? Hmm. Fair enough.
OR
Prompto: Huh... not the one I would have picked, but it's your call.

Some shots of Ardyn
Gladio: Heck of a choice. Hmph. I guess a king forgives and forgets.
Click to expand...
JT compiled a bunch of them up there ^ including what you mentioned.

If I remember (unlikely) in a couple of days I can get you screens/vids if you haven't found some already.

I should have mentioned -- but didn't want to call our buddy out -- that some of those transcriptions aren't entirely accurate (e.g. "So this is it? No regrets?" should be "So you're good with this? No regrets?"; "Huh... not the one I would have picked, but it's your call." should be "Huh. Well...not the one I would've picked, but it's your call."), so I want to use what's on screen for reference.

At some point in my life, I became a stickler for getting everything completely accurate. Even punctuation.

I swear we need to buy you this game

Tres, if you give me an address & I'll just fucking send it to you from Amazon. SRSLY.
You need this game more than I can even.


On a side note, I haven't gotten 'round to Tres' request yet, but I was just leveling up a little bit in some downtime yesterday, and I got some sweet clips to share of just misc whatever that I thought were neat.


I'm not sure if this is true of all summons, but it seems so. At any rate, it's easy to tell that Leviathan can hit enemies in a HUGE radius, which also encompasses things outside of your current field of battle, and sometimes that's hilarious.


When you kill Daemons after the sun has risen, they have a different death animation to reflect their biological sensitivity to the light (I remember seeing this when I started the game, but have forgotten it after becoming stronger and not having overly prolonged battles unless I'm just messing about). You can see their normal death animation in the other vids below.


Some misc Aranea dialogue, combat, & such.


So, I had a Triple Red Giant encounter that Aranea joined, & I was just leveling up her Highwind tech & checking its progression. After a regular strike with it raised it up a level, she got the final blow with Summon Aura enhancing the already stunning lighting & Ignis' healing effects around her for an absolutely gorgeously cinematic that I can't stop rewatching. Plus, everybody but Noctis says something at the end.

Ya'll are a hoot.

As are those videos, X. Neat indeed. That last one was truly gorgeous. And the Leviathan vid was hilarious.

Regarding summons, by the way, I'm pretty sure they all do have that widespread area of effect. I remember seeing someone even say that they summoned Ramuh while going through the puzzle at Costlemark, and with the way the camera moved, they could see his attack damaging Jabberwock in the basement.

Pretty relevant. It appears that in Japan, Noctis is currently the #1 most requested FF character that fans want to see appear in KH3, under him is Lightning, etc. Going by the fan survey that was mentioned. 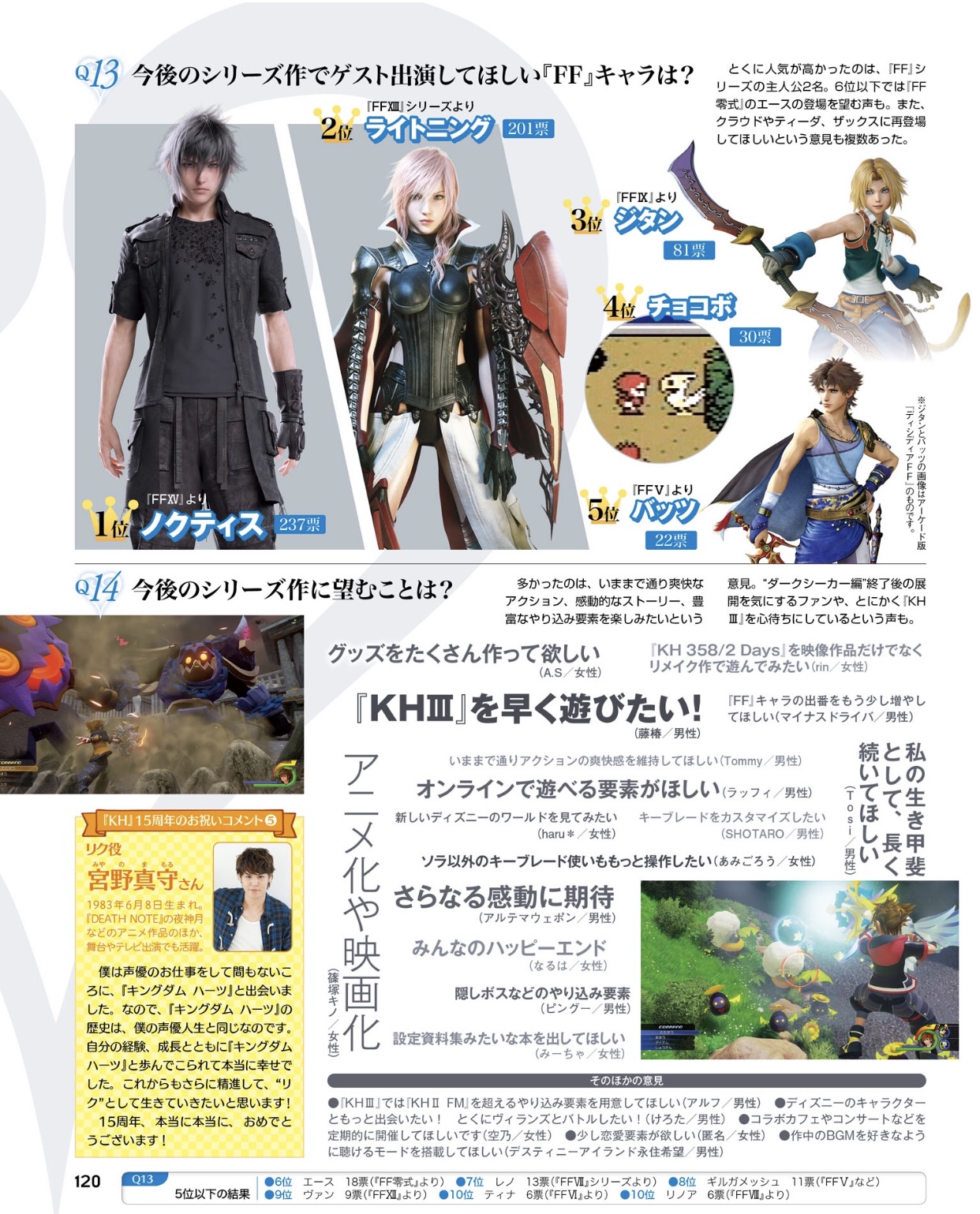 I'm finally up to chapter 13.
I knew that not driving the Regalia manually all that often would come to bite me in the ass because I spent a good half hour redoing the beginning of Chapter 13 several times over because I kept crashing into shit and couldn't properly reverse my way out in time.

But also, I was a lot more sad about the Regalia getting totaled up than I am about what happened to Luna. Now I get what car enthusiasts are all about... (...I also think that the offhand comment of Pyrna dying in chapter 12 also made me really sad.)

Amusing things/glitches about Chapter 13: When Ardyn locks Noctis (and everyone) out of his weapons, and they're all like "OH MY GOD NO WE GOTTA RUN", and starts running, I see Gladio just standing there...with his BFS out. USE YOUR FUCKING SWORD, GLADIO, OR WE ALL GONNA DIE. I mean, fuck, I didn't even know that Ardyn also locked Ignis and Gladio out of their weapons until I played 13.2 and Ardyn gives their shit back to them.

I wish I had thought to take a screencap of said glitch...

But all in all -- Chapter 13 has that Silent Hill feel to it and I looove it. There has been several times where I actually got scared because of the MT soldiers grabbing me at random, and the roars of the daemons spawning actually spooks me more because I'm alone. I'm like waiting for the sudden plot twist that Prompto's actually dead because Noctis killed him but doesn't remember ala SH2, though I know it doesn't happen. XD

Also, I like how at the route split, it says that Gladio and Ignis's path was supposed to be easy, but that's fucking bullshit. Gladio's level 24, ingame I'm level 97. HOW IS THE LEVEL DIP SUPPOSED TO MAKE THINGS EASIER WHEN I DON'T HAVE MY ITEMS AND HP

Just my thoughts, but I still want Lightning and Noctis together in Dissidia, so we can finally get the "Versus" that was intended.

Blade said:
Just my thoughts, but I still want Lightning and Noctis together in Dissidia, so we can finally get the "Versus" that was intended.
Click to expand...
I don't believe they were ever intended to appear in the same title to begin with.

#4,171
And Noctis in my game used Lightning's sword for awhile in the early goings

Making some progress with my search for
the missing comments from my transcription collection. I finally found the comment for a proper Ardyn pic at 30:23 in this video. It was Gladio saying "Heck of a choice. Hmph, guess a king forgives and forgets."

So, I'm glad I put in the effort to confirm it. JT's transcription was once again very close but ever so slightly off ("Heck of a choice. Hmph. I guess a king forgives and forgets.").
And that just leaves a "nobody in it" picture to be found! Almost done!

^ You know, you oughta try to see if there is a special response for shots from the Chocobo Moogle Carnival, or perhaps even Carbuncle.

That's an excellent suggestion. I've not actually come across either of those in all my searching, though. For that matter, I don't think Carbuncle pictures earn a comment during camping either, do they?

The Twilight Mexican said:
That's an excellent suggestion. I've not actually come across either of those in all my searching, though. For that matter, I don't think Carbuncle pictures earn a comment during camping either, do they?
Click to expand...
They don't, but Prompto DOES make a comment on a picture of Cactuar when camping. I THINK that there's a hunt over by the Longwythe Rest Area where you fight one of the bigger ones, and Prompto commented on it when he saw it (something about it being cute/adorable/etc.)

Also, been sick and not playing any games or doing much of anything this week, so I'm glad I'm not holding you up on said research, Tres.