#26
HUZZAH! I cleared the game in 4 days and thusly unlocked the good ending! In the graveyard, Dracula's hand rises from his grave and a deep voice yells "WE'LL MEET AGAIN!" #27
Simon's Quest is one of my favorite Castlevania games. I'm not entirely sure why; might have to do the RPG elements or the ability to get outside the castle or the day-night cycles. And the townsfolks are hilarious. xD

#28
The Annotated Symphony of the Night

A video series that goes through the game's secrets, development history and etymologies. Already from the beginning I can tell this is excellent and I'm learning new stuff about SotN. I never knew that you could manipulate the loading screen text to make it move differently!

Also, I had never before seen the lower 1/4th of this Curse of Darkness artwork. Way bigger image than I expected!

#31
Reporting in the vein of what I'm doing elsewhere, there appears to be at least four lost cell phone ports of Castlevania.

Version 2 was ported and released to American and European cell phones in 2004. The story about these ports is a bit more complicated than they initially seem. At the Video Games Museum, these are the screenshots linked to the Castlevania cell phone game. 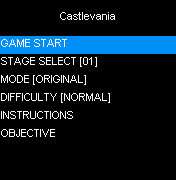 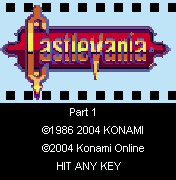 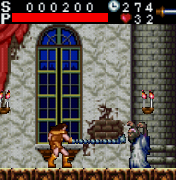 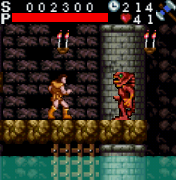 Then we have these two screenshots from a review over at Gamespot. 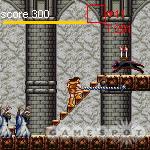 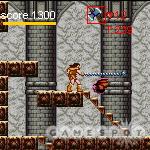 The differences in the interface are quite dramatic. The possible reasons are multiple. Mobile games would often be released in specific resolutions to fit the cell phone at hand. For example, Doom RPG came in three different resolutions: 176x208, a 208x208 and 240x320. It could be that as Castlevania was adapted to different resolutions, the interface at the top also changed. It might also be a difference between American and European versions of this mobile port. ...Or the two gameplay screenshots from VGM might in fact be from the Japanese version.

Over in the archives of the Verizon game store, we find references to this Castlevania game.

Konami's Castlevania is the original Vampire game. Battle your way through level after level of undead ghouls and all manner of monsters and bosses.
Click to expand...
In a later capture, we find...Castlevania 2?!

Konami's Castlevania is the original Vampire game. Battle your way through level after level of undead ghouls and all manner of monsters and bosses.
Click to expand...
As the Gamespot review reveals, the game only offered the first two stages of the castle and then ended with a "To be continued" screen. Notice also that the menu screenshot from VGM reads "Part 1". Ergo, I suspect that "Castlevania 2" was the downloadable continuation which would have let you play at least stage 3.


On the same page as the "Castlevania 2" reference we find another, curious game in the list...

Rated 9/10 on Wireless Gaming Review, play the sexy daughter of Dracula in the hellishly entertaining title from Universal Studios.
Click to expand...
......Oooookay.

Last year's Dracula makes a convenient comparison, as it was an unapologetic Castlevania clone, albeit one that played from the opposite end of the stake. Although Dracula featured larger sprites and generally better artistry, it didn't run quite as smoothly as Castlevania does on the same handsets.
Click to expand...
Would you look at that, they have a review and screenshots for this Castlevania clone.

When it comes to investigating cell phone games from before the era of smartphones, you will inevitably find yourself tumbling down an incomplete but interesting rabbit hole.
Last edited: Oct 24, 2017

#33
Keveh Kins said:
I had the version 2 game on an old phone

Click to expand...
Any idea where that old phone went? Also, do you remember if the interface at the top was on a black bar or if it was like the screenshots from Gamespot?

#34
The version I had looked like the Gamestop screenshot, as far as I remember. I remember the life bar being yellow.

The old phone could well still be somewhere in our old house, or may have been disposed of, lost in time, like tears in rain

#35
If you can find the phone with the game still on it that would be awesome. I can't find a rom for the game anywhere, so if you found a copy that would be a great victory for the preservation of game history. =)

I wonder if we'll ever get another game.

#37
I think if the show does well enough it might at least spur Konami to even re-release a few titles digitally or something to that effect, just to capitalize on it.

Or more likely there'll be a Pachislot adaption of the show

I dunno. They were reluctant to release more than four episodes in a culture where 13 is the bog standard.

A nice hd symphony would be welcome, though. Or a port of lords of shadow. I loved that game ;.;

Same. I'm still gutted that Lords of Shadow II seems to've had its ending fucked over by the studio who wanted to leave the door open for a sequel, instead of letting them follow through on the dark tragedy. Mostly rumors, but it definitely felt like that.

#40
Over at the Castlevania facebook fan page I got in touch with a person named Yusif Kasumov. They had three files: Part 1 for a high-end build of the Version 2 mobile port, plus Parts 1 & 2 for a low-end build of the same port! Thanks to Kasumov for sharing the files.

The original download links for the low-end build apparently no longer work, but you can still download Part 1 of the high-end build over at sanysaky.

Kasumov has been searching for Part 2 and Part 3 of the high-end build and even tried to raise some awareness by using graphics from this mobile port for an NES hack of the original Castlevania. So far, the continuation of the port remains lost.

The high-end version is surprisingly well done. It is the poor man's Castlevania and it ends after you've defeated Medusa in the second stage, but it looks the way it should, plays like it should and you will recognize the areas and even their secrets.

The biggest, most pleasant surprise though was "Alternate Mode". In this mode your whip is gone and you are only allowed to use sub-weapons! You can freely switch between any sub-weapons but they still consume ammo. Having to rethink the way you play the game via this mode felt like a revelation. Has any other Castlevania game ever done this? If not, then it is wasted potential.

This version sports the health meter, clock, hearts etc on a black bar at the top. This version is in many ways identical to its Japanese counterpart, judging from the aesthetics. 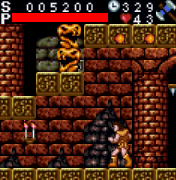 It is in the low-end build that we see the alternate interface.

While I had plenty of fun with the high-end build, this version built for smaller and more low-spec phones...is not fun. There is no "Alternate Mode", no selecting between Easy and Normal, some of the game's secrets are missing, the stage layout and design deviates into a boring monotony and so on. The background doesn't even scroll! The background with the pillars and walls or what-have-you does not move across the whole stage!

Granted, some of my dissatisfaction stems from the clunkiness of java emulators. I can't get the sound to work for this version, the screen segments aren't positioned properly and will sometimes cut off menu text for example and I can't assign the sub-weapon to any of my keyboard commands
(this last point is a frequent problem with many java games though, including the high-end build of this Castlevania port)
. It might also be that the sense of poor response in the controls, and the way that Simon will sometimes get stuck in a cycle of whipping indefinitely, is due to incompatibilities with the emulator.


Far as I can tell, the screenshots from Gamespot seem to represent a mid-end version of the port.

With that we know of at least three iterations of Version 2 released for the English market.
Last edited: Oct 26, 2017

#41
Having played the low-end build on a phone, I can assure you the poor responsiveness of the controls is not an emulation problem

It was very, very slow. Simon felt like a less maneuverable bit of lava lamp wax floating through the air

This is wonderful entertainment. <3

"kya", of romhacking.net, recently found it! More specifically, he found the Chinese port. For years kya had been trying to find the original Japanese version but when he decided to type in the Chinese name for "Akumaj&#333; Dracula" he finally struck gold. What kya found was Castlevania version 3 (or "generation 3") in Chinese and in three resolutions: 128x128, 176x208 and 240x320.

The .jar files are playable via the mobile phone game emulator "SjBoy ChingLish 2.0". Kemulator is not compatible with these .jar files.

The emulator itself is shady. It's difficult to find trustworthy download links. Although the emulator itself doesn't raise any alarms from my anti-virus software, less than a minute after you've started the emulator a window will pop up with gibberish text. No matter if you click OK or exit the window, you'll be sent to an expired link...on Internet Explorer, even! This might just have been a forceful way to advertise the original source of this emulator hack (since it is the "unofficial" 2.0 version)...or it might be having some nefarious, as-of-yet unseen effects on your computer. Download this emulator at your own risk. 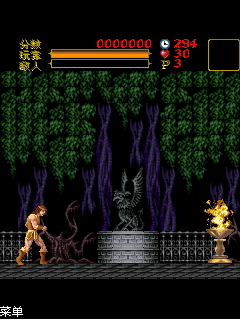 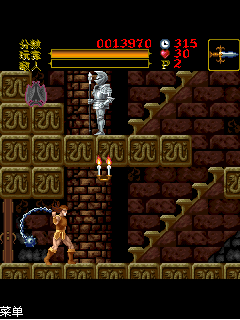 The controls in this mobile rendition are highly responsive and quick. In fact everything moves pretty fast and this greatly contributes to the port's difficulty. For an old cell phone game the graphics are great and I'm amazed that they've been able to compress the full Castlevania 1 game to such tiny files. Yes, the files contain the full game from the first stage to the final battle against Dracula. With the good graphics, tight-ish controls and the complete game available, this port comes close to feeling like an SNES or GBA title.

I haven't tried it myself (because I haven't bothered to navigate all the Chinese menus yet) but kya reports that there is a setting to disable the knock-back effect on Simon Belmont. I find this setting to be a welcome addition to such a difficult mobile port.


Over at romhacking.net, kya created an NES hack of Castlevania using graphics from this ver-3/gen-3 mobile port. You can play kya's patch if you download the latest Mesen emulator (0.9.5 and up) from http://www.mesen.ca.


Huge thanks to kya for making this great find!

With game piracy being more prevalent in countries like China and Russia, there are probably countless treasures yet to be discovered by the rest of the world due to the language barrier. I should take the time and try to navigate some Chinese websites.

It speaks to my Castlevania deprivation that I'm actually excited for the slim prospect of a possibly shitty cash in mobile game coming to western markets.

You know Konami, this would have been nice on ps4. Anyway, If it ever arrives on android I will play it without shame.

#47
Castlevania Puzzle: Encore of the Night released for iPhones in 2010.

#48
The remastered sprites were kinda nifty, Alucard had fucking boulders for shoulders though

From first impressions, Alucard is reminiscing together with this Lucy girl and then you get to play as Alucard and Trevor in the past. Music from throughout the Castlevania series is recycled for this mobile game.
You must log in or register to reply here.
Share: Facebook Twitter Google+ Reddit Pinterest Tumblr WhatsApp Email Link
Top Bottom