#1
So after the *MAJOR* leaks regarding The Last of Us 2 earlier this week, and the fact that most of us have finished Part 1 of the Remake, I want to ask you:

And if YES, which award do you think it deserves? 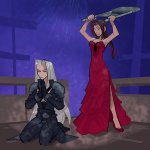 Cyberpunk is a western mature multiplatform game. Those games typically cast a wider net so I would think by that virture alone it has the edge over VIIR and TLOU2 which are Sony exclusive. VIIR is also a crossover title, but still at its heart a JRPG. VIIR will win GOTY from all the worthile RPG publications.

#3
As a fan I’d say it’s worthy but it just doesn’t have that wide reach the other contenders have (CP77, TLOU2, Ghost of Tsushima) so chances are GOTY would go to those other aforementioned titles but hey, who knows.

#4
While I agree that FF7R could have a disadvantage compared to those titles, let's remember that GOTY 2017 was Zelda Breath of The Wild, a Switch Exclusive, and GOTY 2018 was God Of War, a PS4 exclusive. We tend to think that Final Fantasy is very niche, but it still sells a LOT, and everybody talks about it when one comes out.

Here's the thing: I thought TLOU2 and CP77 were the big rivals of FF7R but if you followed those TLOU2 leaks this week, people are PRETTY upset, way more than us FF fans with the Remake's ending. The backlash could potentially costs them GOTY.

And now I also wonder: What if Cyberpunk 2077 is not good? It's a very risky game to make and right now it seems that CDP Red is not very confident with the quality of their game, delaying it, changing from 3rd person to 1st person exclusively. I would not be surprised if that game with its ambitious open world cyberpunk city turns out to be a mess!

FF7R is not perfect by any means, but it's an incredible experience with it's story telling, character animations, music, combat system and most importantly world building. They could totally win AT least something with it if not GOTY

#6
I'm sure it won't win most places, but I was pretty sure it would be mine before it even came out

#7
It'll get nominated for sure. It's a big game that has generated a ton of discussion and was reviewed very well.

I don't think it will win GotY. It's up against some pretty steep competition in Last of Us 2 and Cyberpunk alone; LoU is a sequel to a critical darling, and Cyberpunk has all the advantages that @Edley mentioned above. Those other two are unknowns at the moment, but I think Western awards shows are more likely to lean towards Western games. I also think the texture issues are unfortunately gonna kill its chances of winning anything related to visuals (though, again, it will absolutely be at least nominated).

It doesn't have a ton of competition with other JRPGs (what else even is there? Sakura Wars?), so I could see it sweeping in related categories, or on sites a bit more focused on those.

I dont think its going to be GOTY. It's not even a question of quality really. FFVIIR is definitely a good game, even if people dont like the ending. But, there are more games with a much bigger reach. And I dont think all of them are gonna suck. I dont even think TLoU2 gonna suck either.

It definitely has a chance, hopefully it will win. It's got strong competition however it's certainly in the running. Between its strong sales, user reviews and critic scores, it's in a prime place to win it.

I overall like FF7R, but I still think Cyberpunk and TLOU (despite all the rage) are the big contenders. I think it will get a nomination though. It probably has the strongest chance in RPG and music-related categories.

Don't count your chickens before they hatch.


It will not win that award.

#13
It'll probably get nominations and maybe pick up some awards, but as an RPG it's in the same category as Cyberpunk 2077 which seems a far more obvious choice. The Last of Us Part II is also practically the video game equivalent of Oscar bait, and its obvious ~political agenda~ seems like exactly the kind of thing critics will eat up, so it'll probably get the writing/narrative awards.

#14
It's hard to say this early in the year. I haven't played a better game yet, but that's not to say there won't be one.

#15
Even though the first LOTR movie was arguably the best it didnt win best picture. People dont like rewarding something thats 'incomplete' so to speak. Add onto that FF7R is a remake, and people will be biased to more original games. Unless 2077 and TLOU2 bomb (unlikely) it wont win game of the year.

The original Final Fantasy VII didnt even win that many game of the year awards. Story heavy RPGs are still not mainstream like shooters and action games. Probably never will be.
D

Nomination worthy? Absolutely without question. Game has an 88 average and outside of some issues here and there it does an excellent job capturing FF7's magic. Winning GOTY? Nope. TLOU2 will be far far far more polished an experience and Cyberpunk will be pushing videogames forward.

#18
I would make an argument that it would be deserving of a best soundtrack award, definitely at least a nomination.

Whatever else about the Remake, the soundtrack is phenomenal. Sure there's some duds, but that's to expected given the number of music pieces in the game.

Probably not. But it will definitely be mine and I plan on picking up TLOU II first day. I mean, its impossible for me to not be biased with FFVII. I literally used to wonder as a kid what it would be like to see Midgar in real life, and 23 years later we came as close as we are ever going to come... although I am bummed we couldn't walk around a little more freely and see Loveless. Oh well.

But yeah, in terms off GOTY, the Final Fantasy brand has lost the shine it had in the days of the OG FFVII. Critics love their shiny new things. A decade ago it was Bethesda games. It will probably be Cyberpunk or TLOU. But neither of those games will affect anyone the way the Remake did for die hard fans of the original.

The game doesn't really bring any innovation to the table, and exploration is unimpressive.

Personally, I don't see it as GOTY material if you look at the overall product, but looking at the characterization, battle system, presentation and soundtrack individually you might say it gets close.
Last edited: May 12, 2020

#21
Wol said:
The game doesn't really bring any innovation to the table
Click to expand...
I agree with the rest of your post, but I think it could be argued that the battle system is fairly innovative - it's easily the most successful attempt at combining turn-based and real-time gameplay, and it's not just merely functional, but has a solid amount of depth to it without being totally overwhelming.

Kratos said:
I agree with the rest of your post, but I think it could be argued that the battle system is fairly innovative - it's easily the most successful attempt at combining turn-based and real-time gameplay, and it's not just merely functional, but has a solid amount of depth to it without being totally overwhelming.
Click to expand...
Its certainly the best Final Fantasy battle system I've ever experienced.

Kratos said:
I agree with the rest of your post, but I think it could be argued that the battle system is fairly innovative - it's easily the most successful attempt at combining turn-based and real-time gameplay, and it's not just merely functional, but has a solid amount of depth to it without being totally overwhelming.
Click to expand...
Hmm the battle system simply refines elements that we already experienced in previous FFs. Its a culminations of already seen ideas, peaking in quality... but I wouldn't say its new or surprising enough to be innovative.

#24
GOTY won't compare the battle system to past games in the series. It will simply ask how it performs on its own two feet versus other games in general from this year. It's definitely got a shot when seen in that context.

But I also just think it is rather innovative as an FF game, because until now SE had not been able to bridge the action/turn gap all that well.

I think it is GOTY material. Has immense heart, and the gameplay is astoundingly fun and flashy (which is a hard thing to balance), and the story is very ambitious and is making fans and non-fans eager to see what is in store.
You must log in or register to reply here.
Share: Facebook Twitter Google+ Reddit Pinterest Tumblr WhatsApp Email Link
Top Bottom