#3
OMG THIS is worth travelling the 60 mile round trip to see at the cinema! How epic is this film gonna be?!

Pretty damn epic, it would seem.

Well, that trailer looked a lot more epic than I expected. I'm now officially hyped for this.

Didn't do much for me to be honest.

Yeah, seems like the same formula for the original, modernized a bit. But hey, entertainment, why not

'It depends on what kind of dinosaur they cooked up in there,,,,,'

"Well it's a T-rex with the brain of Hitler"

"will someone tell me what the hell is going on here?!"

"You can't handle the truth about the NAZISAURUS!"

er...yeah. Can't say I'm excited about this at all.

And also, some of those dinosaur effects looked about the same as the ones in the original - not terribad, but you'd think they could do better now.

Now you mention it, yeah - the original Jurassic Park was groundbreaking in terms of its CGI effects at the time, but nowadays it's kinda off-the-shelf work.

They really nailed using practical and cgi in a perfect mesh, the transitions they used to set it up were perfect.
If they went full on CGI it would look really bad today. These reasons are also why LotR looks better then the Hobbit today. Also yeah, there's visually not that much improvement or difference even between the Hobbit and LotR - to the point where I'm actually convinced the Hobbit has but half the budget LotR had.

Like check out the Uruk Hai in LotR and then compare one of them to Azog in Hobbit.

Like you look at him and you KNOW he's not there. You know some green screen is going on and it kills the immersion.

And then you have this bad ass right here. 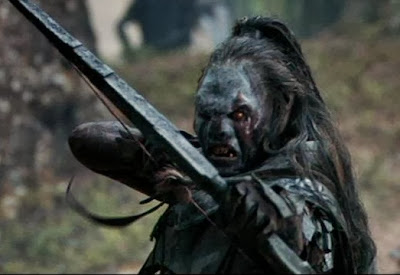 Same thing for JP 1. There are times where its really unclear whether something was CGI or animatronic which really gets the immersion going.

I don't know why they couldn't have made Azog in the same way. I mean ok Azog has more speech but they could have just tweaked his face a bit if the full prosthetics didn't match with him talking.

Pretty sure they did use prosthetics at first but didn't like the design or something so they painted CG over it.

Octo said:
I don't know why they couldn't have made Azog in the same way. I mean ok Azog has more speech but they could have just tweaked his face a bit if the full prosthetics didn't match with him talking.
Click to expand...
I wish they would have done something else lol. He just looks like he's been bathing in lotion every day of his life it doesn't look right on him lol.

Tetsujin said:
Pretty sure they did use prosthetics at first but didn't like the design or something so they painted CG over it.
Click to expand...
This is precisely it. The practical version of Azog didn't translate as well on screen, so they remade him in CGI.

Also, nostalgia-vision is a pretty big factor in remembering Jurassic Park. The few CGI scenes that still work really well are because they use monodirectional lighting in dark environments to cover the limitations of the CGI capabilities at the time. Most of the "but it looks so fake" stuff comes from seeing characters with lots of scattered lighting effects in open environments.

Insofar as The Hobbit is concerned, most of their CGI looks near to flawless in a cinema (at least the ones that I've attended), but overall I think that most people aren't aware of CGI vs. Practical effects a large amount of the time, because there is SO MUCH that's done with hybridized work still. Prometheus used a ton of practical and special effects that were blended together, and it's hard to tell when which is what.

I think that too often the anti-CGI VFX sentiment falls into the, "I can't recognize this as a practical effect that I'm familiar with, so it's clearly fake" which isn't the same as the CGI not looking photorealistic.

There is a good reason why the characters from the other movies are not returning because they would be smart not to go near any park where there are prehistoric genetically engineered monsters. It would be fun if they got the original actors to play some fake interviews about Jurassic World with all their characters saying its a bad idea even though the park has been running smoothly so far. Ian Malcolm and Alan Grant would be the most vocal because they had twice the experience of being on an island with dinosaurs.

If these guys visited and fixed Isla Nublar, did those homies fix up Isla Sorna too? Surely Sorna was not forgotten because they have some OP raptors there and flying pterodactyls all over.


Edit: I love the seaworld look when featuring the Mosasaurus. Kinda like watching a killer whale eat fish xD.

Gabriel said:
I wish they would have done something else lol. He just looks like he's been bathing in lotion every day of his life it doesn't look right on him lol.
Click to expand...
Now theres a mental image I can do with out

Is this Jurassic World think a sequel or a reboot? Cos if its the former then yeah its kind of fucking stupid, but then stupid things happen in real life all the time.

Tetsujin said:
It's a sequel. :p
Click to expand...
So basically, a "We didn't actually learn of our mistakes LOL MOAR MONEY PLOX" kinda plot?

But what did they do with the Overpowered raptors from isla sorna?

where is the spinosaurus?

Apparently the original idea was to do dinosaur-human hybrids. Neat

#25
To be fair, we still haven't seen the top half of this hybrid dinosaur