#1,251
Matthewtheman said:
Not sure, since I'm not sure what unit of measurement I'd use. I'd say the average leg circumference of someone of her height (5'4"). Her legs are definitely longer than a normal person's legs, at least in proportion to the rest of her body.
Click to expand...
I....still don't understand...what do you mean by the average leg circumference of someone 5'4"? Because if you're literally talking "average", I'm SURE that that would be a LOT more "plump" than what Tifa's legs are in that picture. Which aren't plump.

#1,252
Tifa's legs aren't plump, I'd even say that's thinner than average. Tifa has a rare body type where she has large boobs but low body fat and lean muscles. Rare indeed.

#1,254
I was also talking about 012 Tifa only. And when I made the "a bit plump" description, I was comparing to the Nomura Tifa artwork. I'd say Tifa's slightly below average in body size. She's that kind of thin where you're thin, but not too thin. Her BMI is probably on the lower end of the "normal" section of the BMI. (For those of you who aren't familiar with the BMI, there are four sections: underweight, normal, overweight, and obese. You generally want to be somewhere in the normal or overweight sections of the BMI)
If I were to guess her weight, I'd say she's probably somewhere from 100 to 120 pounds, given her height and body type.

Ahh but BMI isn't all that reliable, especially on someone who may have more muscle mass (such as a martial artist) Plus...I reckon about 15% of Tifa's weight is boobs

As for her thighs being plump, in the dissidia artwork she looks even thinner than in FFVII, and then in pics like this http://www.creativeuncut.com/gallery-16/d012-tifa-amano.html I'd say she looks in proportion, her thighs don't look flimsy but I'd agree that the shortness/tightness of her skirt might make them look a little thicker than normal? I'd never describe them as plump or even slightly plump though, but then, my idea of plump is very different......

Tbqh I'm kinda flabbergasted that this is even being discussed.

By what standards is that, in any way shape or form, plump? Seriously? If anything her legs are unnaturally skinny, especially for someone who's supposed to be a world-class martial artist. Those are not toned, those are sticks. Her and Lightning both seem to suffer from anorexic-leg character design.

Also, what Yop said. It's a video game character design. It is not a real life portrait with perfect proportions. Unless you think her eyes are actually that big too. 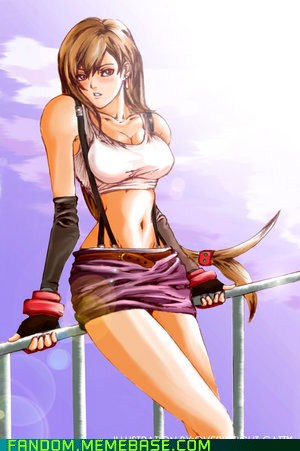 There's some Tifa fanart, because teh clubz our manely abowt fanartz frum wut i cann tel.

That was a joke

#1,261
Max Payne said:
That was a joke
Click to expand...
I'm sure it was, but it doesn't mean it's not partially true. I gave a more correct estimate.

Okay, new to this whole club thing. Pardon me for being a massive n00b but how does one go about joining? Do I just comment here or do I have to PM someone?

In any case, I love Tifa. I've always loved her, and she's someone I intend on cosplaying as someday even though I know I'll never have the boobs to pull it off. Oh well.

#1,263
Just poast a fanart as a sacrifice to appease the cult and you're all set Posted because I never saw anybody draw Tifa with red streaks in her hair and it's just a lovely idea. Click to expand...
Tifa's cowgirl outfit does not have gloves. But I like how they actually got the Star Wars line correct. A significant number of people seem to think it's "Luke, I am your father." instead of"No, I am your father."

#1,271
ASmilingMalice said:
Okay, new to this whole club thing. Pardon me for being a massive n00b but how does one go about joining? Do I just comment here or do I have to PM someone?

In any case, I love Tifa. I've always loved her, and she's someone I intend on cosplaying as someday even though I know I'll never have the boobs to pull it off. Oh well.
Click to expand...
Stuff your bra and you'll be fine.

Just make sure you're not wearing the Crisis Core variant of her cowgirl outfit or her Wall Market outfit, since those out fits have cleavage, and stuffing your bra generally doesn't work if you're gonna show cleavage.

I'm sure you guys have already watched this but in case you haven't, can I just say how much I loved this fight? I'm especially a fan of how well the two actresses fight and move just like the characters in the games. And that Chun Li is PERFECT. I always choose the Tifa Wins! ending though.

Oh I've seen that, pretty awesome and sexy. I chose Tifa in the end.

AKA
FHS, that cloti bitch

Have some chibi Tifa