Kimberly's replacement by Kat was difficult, but I eventually actually liked Kat better. 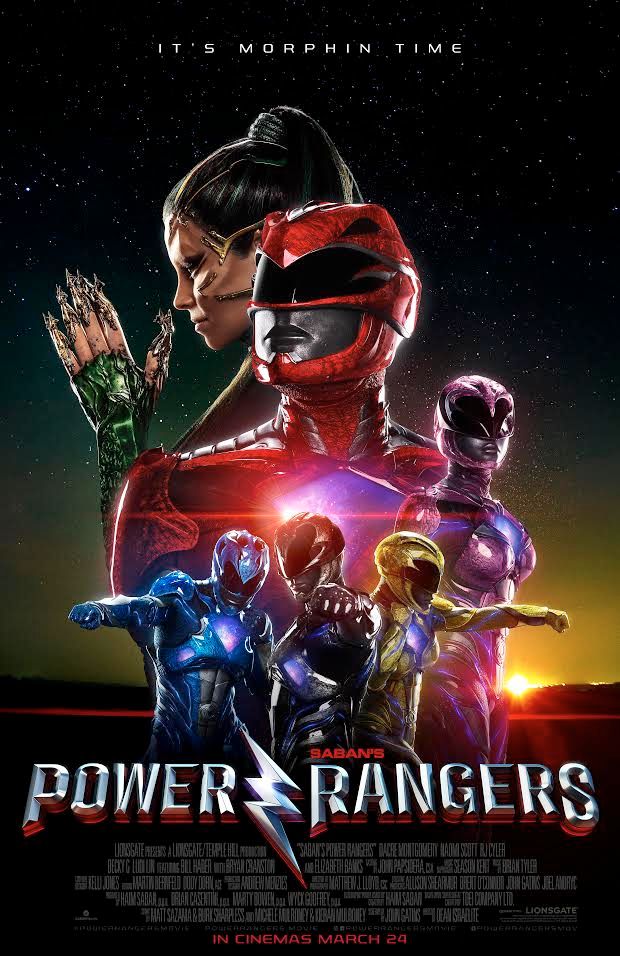 Slight spoilers at that link. Click at your own risk.

If you're unfamiliar with the case (which goes back to early 2015), Medina killed his roommate during an altercation. Medina insisted it was in self-defense, but, as he was facing a charge of first-degree murder, took the plea bargain here that will get him no more than six years rather than the potential life sentence he may have received.

#31
It was fine, I guess. Don't have any desire to ever see it again though. Rita was good, though there's some weird, dark moments with her.
I honestly think the best part is before they actually get their suits. (Aside from the opening joke of jerking off a cow) The Ranger fights are kindof meh, and the zord fights are ok, but they suffer from the same problems as the fights in transformers for me. Can't really see too much, just a bunch of metal flying around.
One move they do, I'm not even sure what they did?
When Kimberly picks up Billy in their words, and Billy's freaking out cause he doesn't know what button to push, she drops him, and when he lands he hits the button and a shockwave happens. Did that happen cause he landed? Cause he hit the button? Did the button work in combination with landing? They set them up as just big robots with guns, so, who knows.
The megazord fight was pretty uninteresting. Trade a few punches (like 3-4), do a cool move, then they finish it in a lame way.

Also, these rangers are violent son of a bitches!
These 5 regular teens are like, "yeah, let's go kill this woman! Get your steel pipes and chains and lets murder her!" Like, they are WAY too ok with beating this woman to death.
Also, zordon said before that you shouldn't escalate a fight unless forced to. Kinda think calling in a zord to deal with puddies is needlessly escalating a fight.
Edit: apparently Krispy Kreme is a real brand.

Oh! And can someone tell me if they changed the black rangers zord for this movie? Cause if I didn't know it was a mastodon, I'd have no clue that's what it was. Even knowing it's mastodon, it was hard to see that in the zord. Looked more like a beetle or something to me.

I liked it, would like to see the next one (more then say, the sequel to Kong).

Saw this yesterday and loved the shit out of it. There were some questionable moments here and there (the opening joke with the cow was an odd choice), but a lot of hilarious and genuinely heartfelt moments too. That last bit in particular is where this movie shines like a newly waxed zord: it really sells you on the bond these kids form.

It actually reminded me a lot of FFXV in that respect -- and not just because excellent use of "Stand By Me" was made.

(Though I do wish it had been the Florence + the Machine version.) There were parts of the plot that were skimmed across quickly, and there was a moment or two where you were left wondering a couple of things (e.g.
why didn't Trini's family hear her room getting demolished when she fought Rita? Why do all the citizens know there are five differently colored Rangers?->Did the Rangers maybe get out of their zords after the battle?
), but if those things had to suffer for the parts that were done really well to achieve what was done otherwise, so be it.

I loved, loved, loved the characterization and interactions in this movie. I really did. I think it's going to stand as a classic for young people for years to come. Sort of like "The Breakfast Club" for a new generation (and a different, slightly younger age group).

Can't wait to see it again, and if there is a sequel, I hope it will be as good as this.

A sequel is in development.

I was actually really worried it would pull a Warcraft and not get a sequel. Really happy to see they are starting to work on it.

I did not think this was happening anymore, happy to be wrong!

#39
Punch up the actual Ranger bits, and I'm happy about this.

Lulcielid said:
A sequel is in development.
Click to expand...
Bad news.

It's a reboot with recasting.

Goddamnit, I would've liked to have seen more of this cast.

It's a reboot with recasting.
Click to expand...
Ahhhh mannn, that sucks. I thought the cast and the story where they left it had loads of potential.
C

It's a reboot with recasting.
Click to expand...
Oh come on, they had the seeds of something pretty good! It wasn't perfect, but only because it was suffering the same sort of problems every origin-style movie has.

I hate this. Hasbro sucks.

lol even the amazing spider-man got one sequel

Makes me sad, but maybe they couldn't afford the original cast anymore? Pink and Red ranger are pretty big actors now, the Black Ranger might end up in the MCU , Yellow Ranger is also doing really well for her self.

That cast got really expensive this year lol.

It's a reboot with recasting.
Click to expand...
This really fucking sucks.
C

#47
Geostigma said:
Makes me sad, but maybe they couldn't afford the original cast anymore? Pink and Red ranger are pretty big actors now, the Black Ranger might end up in the MCU , Yellow Ranger is also doing really well for her self.

That cast got really expensive this year lol.
Click to expand...
It's Hasbro, one of the largest toy companies in the western world. They can afford it, they just value being able to sell products more than investing in quality film making.

They're going to ask that the next studio do something probably with the budget of a Nickalodeon film, and stick to more on-brand design and plotlines so that it's more toyetic.