#1
I couldn't find a thread on this game. I know it's not out yet but I'm super excited for it. Is anyone else as excited as I am. I'm actually more looking forward to this game than even ff7. Crazy I know. I can't wait to explore an almost endless procedural universe.

No release date so far which irks me but I can understand the creator wants perfection upon releasing this game.

I'm skeptical about the game; I mean I can see the potential and shit, but I'm just afraid it'll get very repetitive, very fast. I'm getting a Spore vibe from it; great in theory, kinda meh in practice. They really really really need to do it right in the actual 'game' part of the game; generating planets and such is one thing, fitting it into a game is a whole different... game. Bad pun, sorry

#3
Yeah I hope it doesn't end up like spore. I think the creator is pretty worried about that as well. He has bots flying around his universe now taking random pictures. And then from this he tweaks his equations. I wouldn't mind seeing all those pictures...

I'm not really into those kind of games, but this has my attention and I agree with Yop about repetitiveness. I'll definitely get it, although perhaps not on release date (it's rare I do with any game these days).

So is the game actually ever coming out?

#8
I'd say maybe around the end of 2015-early 2016. The release date was supposed to come out a few months ago, but had to be delayed because there was a copyright issue going on.
From everything I've seen Sean Murray say, he wouldnt announce the release date until he's sure it's going to come out then, and I can't see him putting too much time between when he announces it and when it's released because that leaves too much time for something to go wrong.

I could be wrong of course, that's just the impression I get off of the various interviews I've seen from him.

#9
I have to agree with the others in this thread: while I think the concept is incredible, I can't get excited about the game until I really understand what drives the gameplay. If it's just exploring for exploring's sake, I'll probably give it a miss. Also, I'm a little disappointed that, aside from naming things, changes made to planets are only temporary. I understand the problem of syncing the state of 18 quintillion planets, but still, it makes the player's actions feel less meaningful. If I make something really cool - or even fuck a whole planet up - it would be exciting to think that someone else might find it someday and think, "wow", or "what the hell happened here?"

I'm somewhat hyped for it because it looks pretty and promising, but I also agree with Flint. It's also something that's not necessarily copying anything on the market, too. Hopefully, a release date will be announced soon with some more details.

#11
I wouldn't say I'm "excited" for this game, but I'll probably get it as long as it debuts at a reasonable price and has more than exploration. Although tbh I find the exploration aspect pretty cool on its own.

Lex said:
Although tbh I find the exploration aspect pretty cool on its own.
Click to expand...
Yeah, but only for a short while; I think an apt comparison would be to play Spore, but only the 5th stage where you can fly around randomly generated worlds / species and not actually do anything. 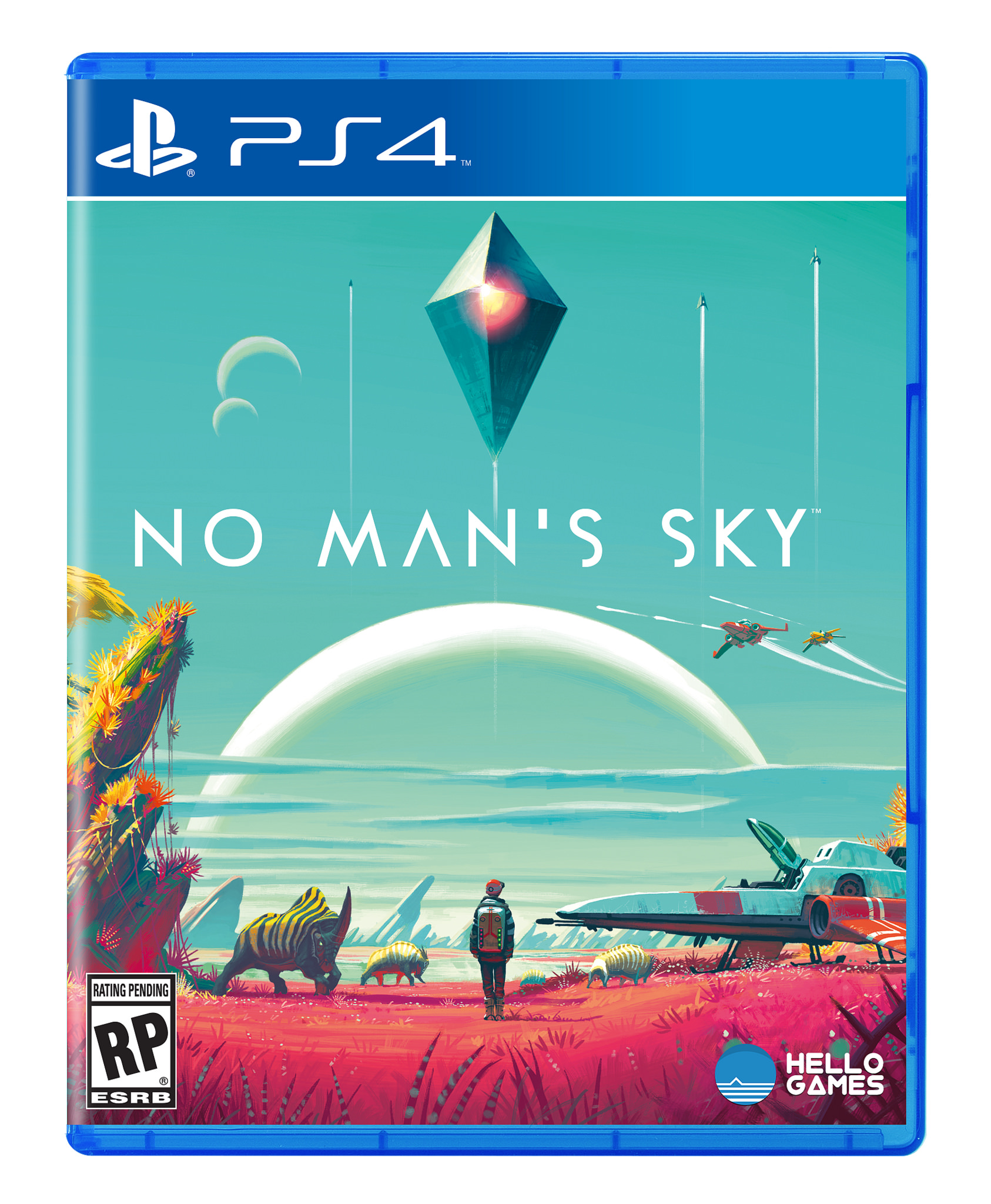 EDIT: I still think that dev guy is hot. Especially when he starts talking about his love of maths <3
Last edited: Mar 3, 2016

I'm really curious about this game and going to keep my eye on it. Just have to say though, that box cover art is gorgeous. <3

Flare said:
Just have to say though, that box cover art is gorgeous. <3
Click to expand...
Glad I'm not the only one that feels the need to point that out. Also getting my eye on this game, not sure.
I going to wait for revews before buying.

#17
Here's a cell phone wallpaper version they tweeted out about a year ago. It was just promotional art back then though. I've been using it as my wallpaper since. It's maybe been delayed until August:
http://www.escapistmagazine.com/news/view/167545-No-Mans-Sky-Release-Date-Reportedly-Delayed

Got this preordered, it's meant to be here by Wednesday. There could be a slim chance it might be before as GAME have already shipped it.

Some people have got it early already, but the servers are going to be wiped, so it'll be a clean and fair slate.

#21
Okay I haven't been posting but I have been keeping my eye on this game. I think this is definitely something I would like to get.


The Three Paths – there are now new, unique “paths” you can follow throughout the game. You must start the game on a fresh save, with the patch, as early choices have significant impact on what you see later in the game, and the overall experience.
The Universe – we changed the rules of the universe generation algorithm. Planets have moved. Environments have changed biomes. Galaxies have altered shape. All to create greater variety earlier. Galaxies are now up to 10x larger.
Diversity – Creatures are now more diverse in terms of ecology and densities on planets.
Planets – we’ve added dead moons, low atmosphere and extreme hazardous planets. Extreme hazards include blizzards and dust storms.
Atmosphere – space, night time and day skies are now 4x more varied due to new atmospheric system, which refracts light more accurately to allow for more intense sunsets.
Planet rotation – play testing has made it obvious people are struggling to adjust to this during play so it’s effects have been reduced further…
Terrain generation – caves up to 128m tall are now possible. Geometric anomalies have been added. Underwater erosion now leads to more interesting sea beds.
Ship diversity – a wider variety of ships appear per star system, and are available to purchase. Cargo and installed technology now vary more, and ships have more unique attributes.
Inventory – ship inventories now store 5 times more resources per slot. Suit inventories now store 2.5 times more per slot. This encourages exploration and gives freedom from the beginning. We’re probably going to increase this even further in the next update, for people in the latter game phases, and will allow greater trading potential.
Trading – trading is deeper. Star systems and planets each have their own wants and needs, based off a galactic economy. Observing these is the key to successful trading. We still working on adjusting this based on how everyone plays, but all trading values have been rebalanced across the galaxy, giving a greater depth. A bunch of trade exploits were uncovered and have been removed
Feeding – creatures now have their own diet, based on planet and climate. Feeding them correctly will yield different results per species, such as mining for you, protecting the player, becoming pets, alerting you to rare loot or pooping valuable resources.
Survival – recharging hazard protection requires rare resources, making shielding shards useful again. Storms can be deadly. Hazard protection and suit upgrades have been added. Liquids are often more dangerous
Graphical effects – Lighting and texture resolution have been improved. Shadow quality has doubled. Temporal AA didn’t make it in time, but it’s so close
Balancing – several hundred upgrades have had stat changes (mainly exo-suit and ship, but also weapon), new upgrades have been added.
Combat – Auto Aim and weapon aim has been completely rewritten to feel more gentle in general, but stickier when you need it. Sentinels now alert each other, if they haven’t been dealt with quickly. Quad and Walker AI is now much more challenging, even I struggle with them without a powered up weapon.
Space Combat – advanced techniques have been introduced, like brake drifting and critical hits. Bounty missions and larger battles now occur. Pirate frequency has been increased, as well as difficulty depending on your cargo.
Exploits – infinite warp cell exploit and rare goods trading exploit among other removed. People using these cheats were ruining the game for themselves, but people are weird and can’t stop themselves ¯\_(シ)_/¯
Stability – foundations for buildings on super large planets. Resolved several low repro crashes, in particular when player warped further than 256 light years in one session (was only possible due to warp cell exploit above).
Space Stations – interiors are now more varied, bars, trade rooms and hydroponic labs have been added
Networking – Ability to scan star systems other players have discovered on the Galactic Map, increasing the chance of collision. Star systems discovered by other players appear during Galactic Map flight
Ship scanning – scanning for points of interest from your ship is now possible. Buildings generate earlier and show up in ship scans
Flying over terrain – pop-in and shadow artefacts have been reduced. Generation speed has been increased two fold (planets with large bodies of water will be targeted in next update)
Writing – The Atlas path has been rewritten by James Swallow (writer on Deus Ex) and me. I think it speaks to the over-arching theme of player freedom more clearly now. Early mission text has been rewritten to allow for multiple endings.
Last edited: Aug 8, 2016

This game is going to eat away at pretty much all of my remaining spare time.

And I also love what is still on the horizon:

Next up we&#8217;re adding the ability to build bases and own giant space freighters.
Click to expand...

Not gonna lie, those patch notes renewed my excitement in the game. Bars in space stations? Yes please.