#1
The aesthetics of this game look amazing:

Watched the Easy Allies impromptu playthrough of the demo after the Nintendo Direct livestream, it looked really good. Story seemed interesting too, wasn't lighthearted like I thought it might be.

Too bad it's Switch exclusive.

#4
I played the demo of this myself today and thoroughly enjoyed it (I also got a Switch today). Really looking forward to this game releasing. It's everything I want out of a retro-style-but-modern FF. It was pretty FF-tropey, but in a good way.

This game is releasing on 13th July and I'm actually really looking forward to it. They've already made a bunch of improvements from the demo, and they've revealed all 8 characters at this point:

#7
I just finished the latest demo and wanted to talk a little about how this seems to work:

- You can start with any of the 8 characters, they have a short (maybe like an hour long) prologue explaining their motivation from setting off
- There are areas between the towns that are fairly low level, higher level stuff to the centre of the map and to the outside edges
- When you complete a character's prologue you can immediately set out and team up with anyone of your choosing (you can recruit all of them obviously)
- When you get to another town, you can speak to the other main character immediately and the game asks you if you want to hear their backstory - this starts you from the beginning of their prologue solo until maybe about 30% of the way through their prologue at which point you team up with the character you just brought to them
- You get 3 hours of this "demo" at which point it asks you if you want to save, said save can then just be continued with the full game. But you can also start a new game for a different "beginning" which I think I'm gonna do now just to see what some of the other characters are like.

So for example I started with Cyrus, the scholar. Did his story, then went northwest and found Ophilia, did a BIT of her backstory, then had Cyrus and Ophilia for the rest of Ophilia's prologue (and I'm glad I did, that boss was tricky). I feel like the difficulty of bosses must scale based on whether or not you have a solo character or a full party, because I can't imagine pulling that one off with Ophilia solo.

Character actions are neat - Cyrus has "scrutinize" which is basically like an overview of an NPC's backstory and using it can do many things based on said NPC, like reveal a hidden item (seems to be the most common result) or make the inn or shops cheaper, add weapons to shops etc. This has a success rate and if you fail a number of times your "reputation" within the town suffers, meaning you can't perform these character actions. You can restore your reputation by speaking to a dude in the tavern but it's expensive and I couldn't afford it after ruining mine, so avoid that lol.

I have one concern and that's simply that the characters so far have not interacted with each other. When they met up there was simply a menu that said "would you like to team up?" y/n and there was maybe one or two lines of "oh hello" or something, but I suppose that's a massive logistical challenge given that you can start with any character and recruit any of them in any order lol.

#8
Love the look (literally as in "the visuals") of the game, indeed.

#9
I've not been really looked at this game (because I don't own a Switch) but after finally watching the trailer I finally understand what's been bugging me about it. I knew something was familiar, so it really doesn't surprise me that the Bravely Default dude's are behind this. I thought the first one was brilliant (though repetitive), with a fantastic gameplay mechanic and had a beautiful art style. This looks to be replicating that but seems a heck of a lot more successful mainstream already before its even launched.

Ugh. I wasn't going to get a Switch until the first core Pokemon game came out, but...

#10
OK Octopath we're cooking with gas now (it's music only)

Even if this game bombs the OST is already amazing. 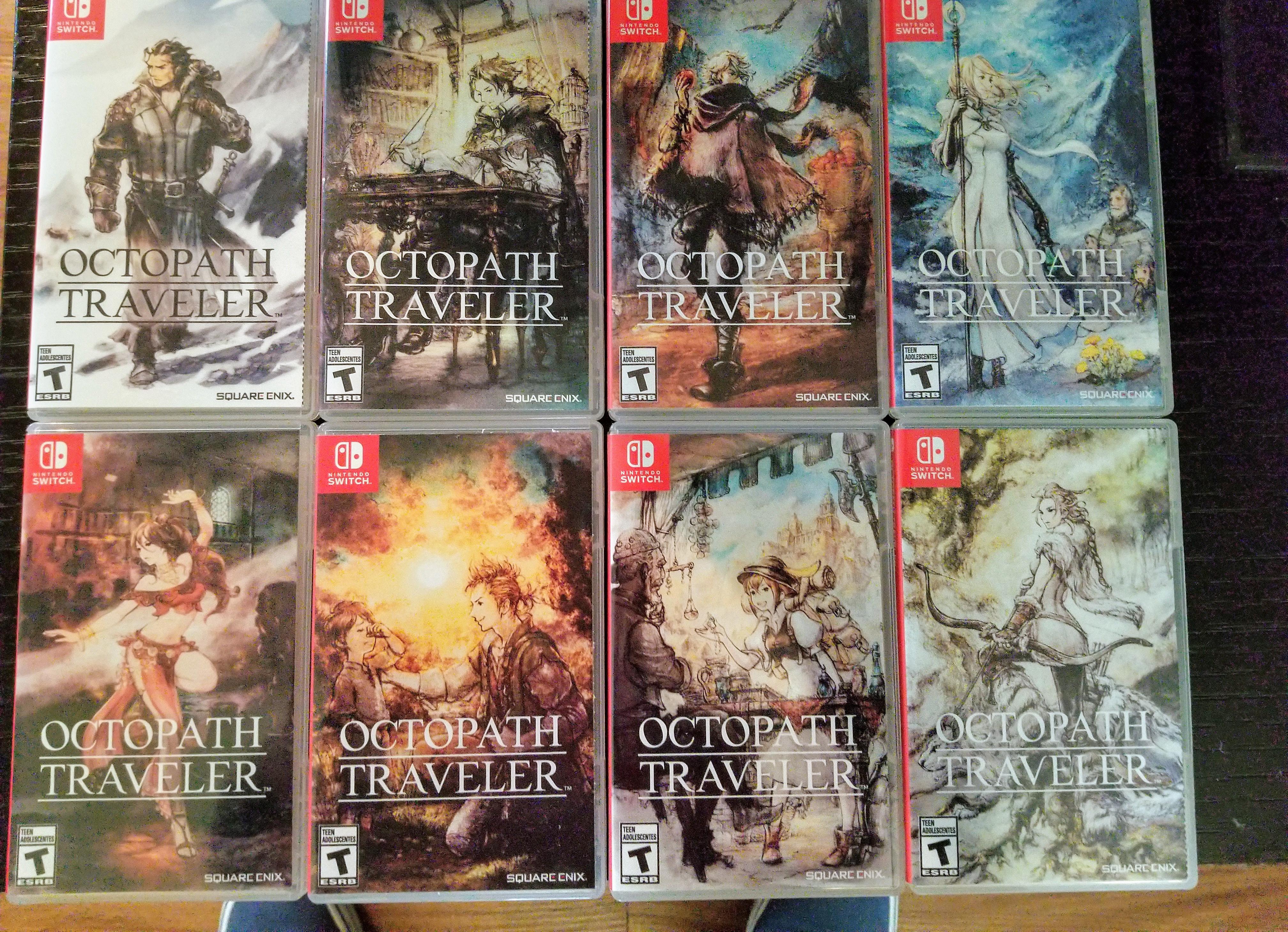 Started out as Tressa cause she's my merchant bae. Pretty interesting so far

#13
I just continued my second demo playthrough to get as far as I could the other day, so I think I started with Therion. I've nearly recruited them all now! Just need to finish Alfyn then I'm going for Cyrus and Olberic.

I've been behind cause of my 2 jobs. I went Tressa to Cyrus and now onto the Cleric. Did you get the Wayfarer's Edition? The coin is pure metal and the map is actually cloth.

#15
No I didn't but you've made me slightly jealous :3. I did want to get it but I thought it was a bit too expensive - I guess it was worth it if the stuff is real. Normally when I get editions like that I feel like I've been cheated so I opted out this time.

I'm going to continue my playthrough today, life keeps getting in the way of me playing this game :/

I usually always grab collectors if I think the game is worth it. Square isnt too bad as long as there isnt a figure. God bless are Square Enix figures bad.

#17
Square Enix apologise for Octopath Traveler shortage in Japan after a restock sells out in less than 3 hours: link.

#18
You'd think that they would have learnt their lesson from Bravely Default and how much people want well-built, old skool RPGs. Graphics be damned. * But hey.

* That's not to say that Octopath doesn't look beautiful, but you know what I mean.

#19
I have 'Octopath Traveler' written down in the notes on my phone but I never got around to looking into it.

Click to expand...
I didn't see this until now. Yoshida, man. I recognised his style right away. Fucking Yoshida. <3333

Fangu said:
I have 'Octopath Traveler' written down in the notes on my phone but I never got around to looking into it.

#21
Okay, a LITTLE bit influenced then

Yoshida didn't even do the character designs?

The art of the main characters looks like Akihiko Yoshida&#8217;s work, but it&#8217;s actually from Naoki Ikushima, who previously provided monster artwork for the Bravely games. It&#8217;s nice that Square Enix has someone else who can fill his role whenever he&#8217;s unavailable
Click to expand...
http://www.theicecave.org/damage_control/2017/01/bravely-default-project-octopath-traveler-second/

Well, there you go

#22
Ikushima is the new Yoshida confirmed <3

The artwork is glorious. Every now and again I just stare at my game case like "hnnnng".

#23
Finally going to be able to play this when it releases on Steam on Friday. Can't wait!

#24
I had a really good time with it but then put it down and haven't picked it back up again. I bought it on release, think I was on Chapter 2 for most folk? Definitely will go back to it at some point.

#25
Really enjoying the game so far. There is a lot to love here, from the beautiful art style, the incredible music, and the battle system which reminds me a lot of Bravely Default. I picked Olberic (the Knight) as my starter, and have now encountered Tressa (the Merchant) and completed her opening chapter. The town/field skills is a nifty addition too.
You must log in or register to reply here.
Share: Facebook Twitter Google+ Reddit Pinterest Tumblr WhatsApp Email Link
Top Bottom