Since the release of FFXIII we have been noticing several parallelisms between the last FF installment and its predecessors, namely, FFVII. It is true that some Final Fantasy entries pay homage to earlier numbers, like in FFIX, with clear references to Cloud Strife and Squall Leonhart, among others, but this time it looks like creators brought that a step further this time. We have found out some of those similarities, but the list is open for all of you to add more of them.


TresDias said:
FFVII/FFXIII Parallels List
1) The basis for Lightning's design was that she be a "female version of Cloud." Not only does this hold true in general demeanor and naming scheme, but she's also a former soldier of the Sanctum, whereas Cloud was a former soldier -- and, as far as he knew, an ex-SOLDIER -- of Shin-Ra
2) Sazh Katzroy could be seen as analogous to Barret, as both lost their wives three years before the game, both are single parents, and both are "the black guy"
3) The Sanctum could be seen as analogous to Shin-Ra
4) Team Nora could be seen as analogous to AVALANCHE
5) Both games begin with two of the game's resistance fighters (the Cloud character and the Black Guy) launching an attack on the establishment from a train
6) Both games end with a large, meteor-like object falling toward the planet, threatening imminent catastrophe, only for it to be averted by something rising out of the planet to prevent it. In both cases, female party members who fell in service to the cause are responsible for saving everyone
7) Snow talks about being a hero, as Zack did
8) Snow fights like Tifa, using only his gloved fists
9) There's a date scene involving fireworks
10) There's a highway chase scene
11) There's a scene where one character suggests a journey to see a lost second character again, while a third confirms that they can go do this.
Click to expand...

Glaurung said:
12)Proud Clad
13)Costa del Sol kind of music at one scenario.
14)Sadistic blonde bitch who works for the evil Empire/Corporation.
Click to expand...
Loxetta said:
15)Cloud Serah hides his Geostigma her l'Cie mark on his her left arm with a sleeve bandage out of shame from everyone and his her martial-artist koibito, Tifa Snow.
Click to expand...

#2
So this was the FFVII remake then?

Vendel said:
So this was the FFVII remake then?
Click to expand...
Yes.

Vendel said:
So this was the FFVII remake then?
Click to expand...
That seems to be the case, for what we know until now


16) Characters who wake up after sleeping during a long period of time; thirty years for Vincent Valentine and 500 years for Fang and Vanille.
17) Both Rygdea and Reno share, not only a similar hairstyle, but also a laid-back attitude, even resting their weapons on one shoulder in a relaxed pose, not proper of their respective jobs (soldier and Turk).
18) Long haired, almost bare-chested evil characters. Think Sephiroth and Jihl.
19) An antagonist sprouts wings, but in Cid Raine’s case said wings were at both sides of his back, with a total number of eight, unlike FFVII’s antagonists, whose wings were only at one side with a maximum of two wings in Angeal Hewley’s case.

#5
Wait a minute. So, you're saying that Square-Enix recycled some of FF13's plot elements from previous games?

STOP THE PRESSES, THE PEOPLE MUST BE TOLD!!!!

I think it's interesting.

#8
TresDias said:
I think it's interesting.

DrakeClawfang said:
It is, but is SE recycling plot elements anything new? I could list the FF6-FF7 parallels if you like.
Click to expand...
Actually, I see what you just said interesting too.

#10
Glaurung said:
Actually, I see what you just said interesting too.
Click to expand...
Bah, I'll list them anyway. :p. From the top....

I saw interesting doing this because FFXIII is the newest entry, and because all the hype around it, but it could be really nice to do it with all the rest.

But I have to admit that I can't remember how point 11 applied to VII, could you refresh my memory, please?

#12
Glaurung said:
But I have to admit that I can't remember how point 11 applied to VII, could you refresh my memory, please?
Click to expand...
The Warring Triad - Jenova

Well, technically all the Jenova bits are one entity split apart, but yeah.

#13
I'm stupid, shouldn't have read. I try to avoid spoilers, and here I am

I shall not visit any spoiler-ified thread until AFTER I have played the game!

TresDias said:
I think it's interesting.

Click to expand...
I think it's typical, and boring.

Dacon said:
I think it's typical, and boring.
Click to expand...
Let's see what Vanille thinks. 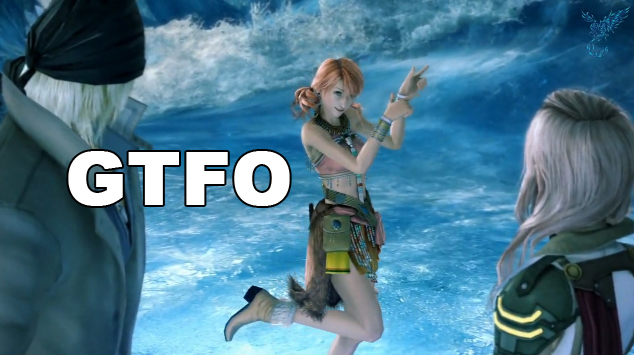 Dacon said:
I think it's typical, and boring.
Click to expand...
Why do you win at every thread?

You need to put a weight on that cock of yours Tres, its starting to even poke through every forum post of yours now.

must every FFXIII thread go in this direction? must every FFXIII thread go in this direction?
Click to expand...
If it does, that should tell you about the game, now shouldn't it?

Oh, you. It's not plagiarism...if you're copying yourself.

Wow I remember that being posted years ago on acf.

#23
Paradox said:
It's not plagiarism...if you're copying yourself.