The Twilight Mexican said:
This sounds disastrously pre-mature and ill-conceived:
Sony intends to release a film starring Venom by October of next year
Click to expand...
It's also probably gonna be R-Rated as Sony tries to figure that out.

This has its own thread now.

We can entitle it, "That franchise Sony Pictures is determined to fail at building, even though it should be the easiest thing they've ever done."

If it does, it will also be a day that will live in infamy.

It's almost too painful to watch...

Looks like the Venom film is set for 10/5/2018 & Carnage is apparently gonna be the villain.

Didn't you make a thread for the Venom movie?

Tetsujin said:
Didn't you make a thread for the Venom movie?

https://thelifestream.net/forums/showthread.php?t=19550
Click to expand...
I searched for it, and for some crazy reason, it didn't display in the results and I thought I was going insane. Thanks

Also because there were news earlier that Amy Pascal seemed to clarify this takes place in the MCU, it still doesn't

This whole endeavour still seems weird and ill-advised to me.

"Let's build a Spider-Man universe without Spider-Man! Or maybe he's in there. But not the one from the MCU. Or maybe it's Tom Holland but still a parallel universe version of the MCU Spidey. We'll see!"

Tetsujin said:
Also because there were news earlier that Amy Pascal seemed to clarify this takes place in the MCU, it still doesn't
Click to expand...
Or it kinda does except none of the Sonyverse stuff will cross over regardless?

I don't know with these guys anymore

#13
It means they're going to make it as close as possible to the mcu with nods, Easter eggs, etc, without Disney getting in their face about it, to try and leech off their success, from people who don't pay attention to studios. At least they seem to be drawing inspiration from the right design.

Looks like they're doing the story based on Lethal Protector and Planet of the Symbiotes. It'll be interesting to see how they avoid using Spider-Man, but relocating Venom, centering his conflict around the other Symbiotes, and focusing on the specifics of the relationship that Venom and Eddie have there seems to be a really good approach. I can definitely see why this would be descending into R-Rated territory. 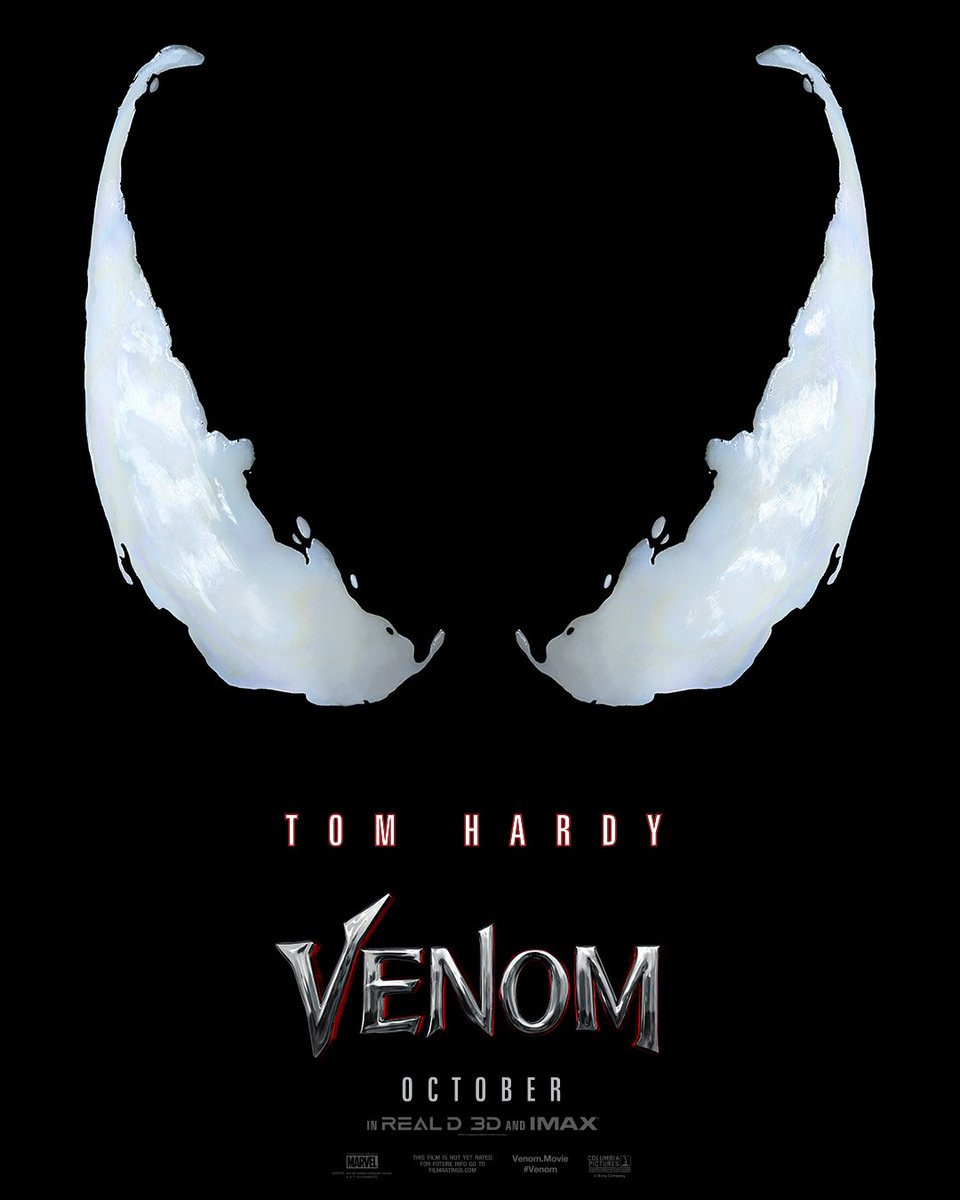 Something for this (likely a teaser) drops TOMORROW.

Tetsujin said:
It's gonna be a cold day in development hell before this ever gets made
Click to expand...
Now:

Eh, that was kind of nothing. Didn't do much for me.

#20
Would have been nice to see Venom. On the other hand the trailer might have been purposeful by only briefly showing the black "goo". I'm getting the impression that the symbiote has been removed from Eddie Brock and that he's experiencing withdrawal symptoms. If the plot is about how Eddie's life is looking without the symbiote, then I am concerned. We want to see Venom more than we want to see Eddie Brock. Hopefully my suspicions about the plot are incorrect.

Given the comics that the story is based on, the little bits we saw and heard in the trailer have me quite excited. I recently went back and read through Lethal Protector and Planet of the Symbiotes to try and get a feel for what this would be about.

A basic loose overview is Eddie Brock leaving everything behind and trying to start a new life as Venom in California without a place to really belong, and trying to be a hero even if he's more violent about how he goes about it. We get the big bad evil corporation experimenting with Symbiotes and using him as an unwilling test subject to create others that he has to stop. There's also a part after that where he wonders if the Symbiote is changing who he is and they split up, causing it to scream out in pain &#8212; triggering an invasion. During the invasion it ends up in him realizing that they are who they are together, and rejoining with the Symbiote to kick ass, stop the invasion, (and possibly also Carnage).

Given that we haven't been shown what they look like as Venom, I'm expecting that's because they want to get the VFX nailed down before showing it off, and something like this also involves LOTS of other Symbiotes, so I think that it hit all the right notes as a teaser for the material it's based off of.

The real call will still be when we get a proper trailer, but it's definitely the right tone and the right setup so far.

Even with that in mind, I just don't feel like this is going to work. It needs more set-up than what they've given the concept (you can't introduce the symbiote and then more symbiotes in the same movie without diluting the significance of the original), and if this particular teaser is supposed to give an overall feel for the movie as a whole, I expect a flop.

It may even be a good flop to us fans of the comics, but a flop 'twill be.

The Twilight Mexican said:
Even with that in mind, I just don't feel like this is going to work. It needs more set-up than what they've given the concept (you can't introduce the symbiote and then more symbiotes in the same movie without diluting the significance of the original), and if this particular teaser is supposed to give an overall feel for the movie as a whole, I expect a flop.

It may even be a good flop to us fans of the comics, but a flop 'twill be.
Click to expand...
I'd gladly disagree.

I feel like the story in Planet of the Symbiotes really hits at the core of what makes the Venom Symbiote different than the other ones (as it goes into mountains of detail about how it's different than its bretheren in how it wants to BOND with a host, rather than use them up like a husk). Take that along with the starting framework given by Lethal Protector of Eddie leaving NYC and not really feeling like he has a place and trying to be a hero in his own way in SF, and I think that there's PLENTY of opportunity for differentiating the Symbiote, without needing to linger on the direct Spider-Man-based origin story. On top of that, you've got the setup of the evil corporation subjecting him to experiments and creating other Symbiotes spawned from Venom to dive into a story centered all around the Venom Symbiote and its emotions (the psychic scream is what triggers the others to come find it), especially because Planet of the Symbiotes ties that all together with him firmly establishing THEIR identity as Venom.

I honestly felt more hesitant about it before reading those arcs and trying to think about how you could make a film work given a questionable level of allowable connection to Spider-Man.* Given the things that you hear in Tom Hardy's voice over in the teaser, it seems like it's hitting on all those big points that I think can define Venom outside of just his relationship with Spidey, which is also the trajectory that those comics take to establish Venom to stand on his own. It helps to paint Venom as a cosmic entity that's more than just a muscle-bound black Spider-Man, which I think is probably the most important thing.

*since there're various levels of Spider-Man not/maybe/yes being in the film (not connected to the MCU or adjuncts to the film like Agents of SHIELD or Maybe we'll see them cross over). I'm assuming no until hearing otherwise, but it'd be rad if there was a loose reference to the costume in Infinity War, or we get some other connection to Spidey & the suit just in Venom.

Either way, I think that this film can work really well given just those two storylines, without needing to be an origin film, but still establishing Venom's origin.


tl;dr – the black suit origin feels like it establishes Venom & Spider-Man's relationship, but these two stories feel like they they establish the larger Venom-as-his-own-anti-hero origins that lets the character stand on its own – which is the biggest and most important thing it needs to be able to do.

As always, I appreciate your eternal optimism.

But like I said, whether it's a good film isn't going to be enough to make it work. Venom hasn't even managed to get out from under the shadow of being a Spidey derivative in the comics (no matter how much Marvel wants to pretend he has), so he sure hasn't done so with general audiences whose only knowledge (if any) of Venom will be from the disappointing "Spider-Man 3" movie and/or the 90s Spidey cartoon on FOX.

#25
I think Venom can stand on his own two feet and make a blockbuster movie with the story lines that are available, but not with that trailer. If you see signs the story could be potentially awesome based on that trailer, well, fantastic. For people like myself, outside the comic bubble, it's like an average person looking at a piece of abstract art, unable to read the signs it is communicating. It looks average at best.

I'm not chucking this on the garbage yet though, I just want to see more. Fire the marketing department and bring in whoever is handling Deadpool