So, the first Marvel Star Wars comic came out, and it's FUCKING. AWESOME. Like, it's everything Star Wars that you could possibly hope it would be. It takes place between Episodes IV & V, and oh my science. I love it.

You owe it to yourself to check them out.

Darth Vader #2 was pretty good. I'm curious how it'll play out with the current elements between now and the events of Empire Strikes back. I'm wondering about rewatching the films again after some of the arcs have developed and see how they feel.

Also, I'm just lumping in the Solo titles into this thread for now. If needed, I can split them off.

I think that will work fine. I've been doing that with the announced "Secret Wars" tie-ins, but later on I'll probably make individual threads and use the original thread for discussing the main mini-serieis.

Leia was decent. Still good, but not nearly as good as the other two, though I can't quite put my finger on why right off the bat. 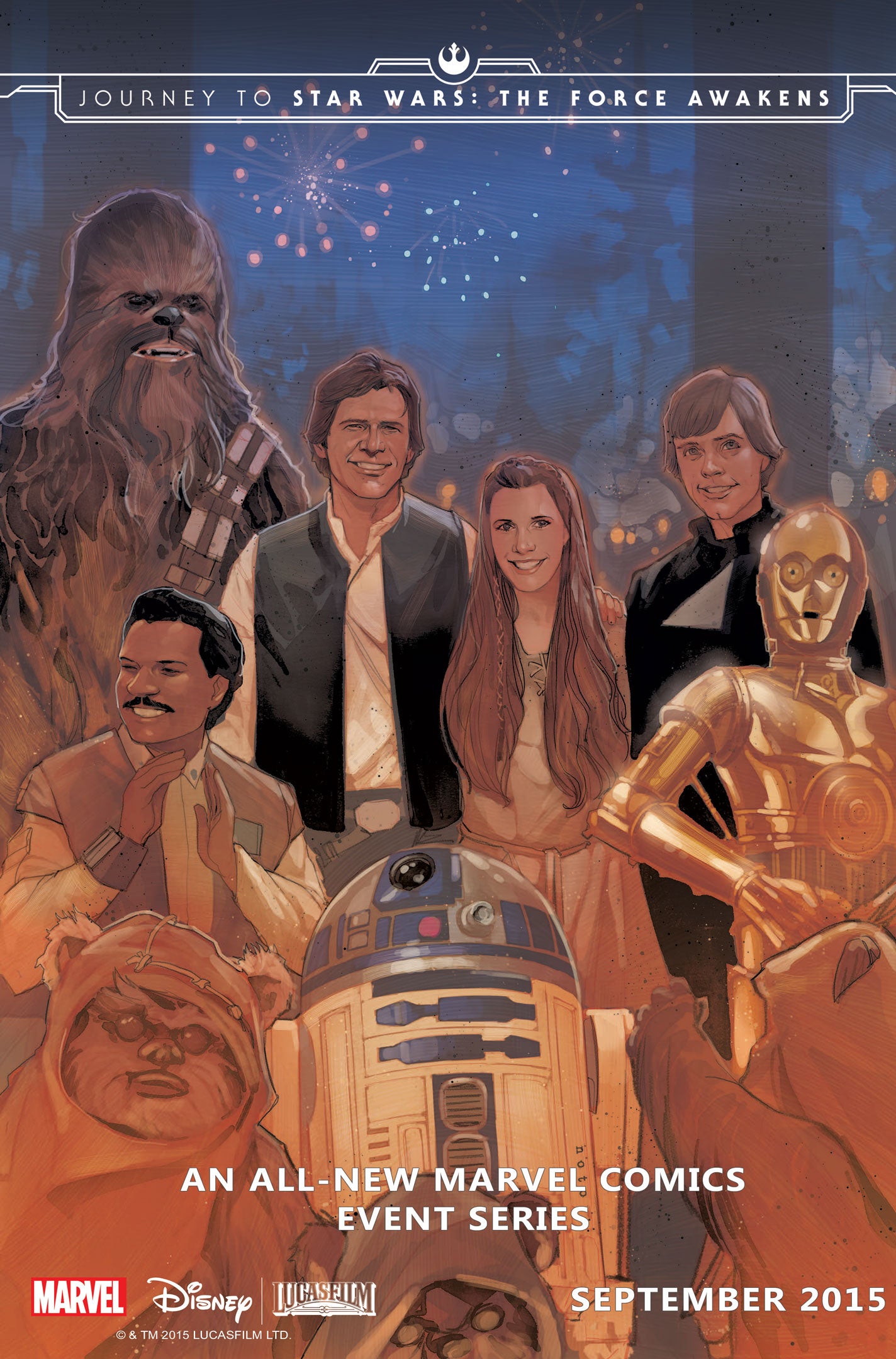 Just read Star Wars #1 and 2. Good stuff so far, like the art as well. Only thing that bothers me is that I read through comics so quickly and then I'm just left wanting more. =<


I don't know how I feel about Luke confronting Vader before Empire.

That said, Vader was a boss.

Tetsujin said:
Just read Star Wars #1 and 2. Good stuff so far, like the art as well. Only thing that bothers me is that I read through comics so quickly and then I'm just left wanting more. =<


I don't know how I feel about Luke confronting Vader before Empire.

That said, Vader was a boss.
Click to expand...
I feel the same way, but I think giving Vader some detective work to do to figure put who the fuck Luke is, given the content of Episode III and him not knowing that he had a son before the revelation during Episode V, I think that they can make it work. I plan on rewatching the films to see how it changes the tone in a positive or negative way.

I have a doubt, what will the Darth Vader series be about?

It's about Vader's role in the Empire post-Episode IV.

Vader #4 was rad, and I CANNOT WAIT for 5. Vader's back to being absolutely terrifying.

On the other hand, Star Wars and Vader both happen at the same time this week and HOLY SHIT. They have probably the best Star Wars moment ever, and while both issues show it, Vader's is vastly more exceptional in its presentation (and I posted it to my tumblr).

Just gonna throw this out here: These comics are still awesome -- and Shattered Empire started today, and it is gonna be goooooooooooooood.

Lando ended its 5 issue run, and it was the best short run and one of the best character stories yet. Bar none.

Shattered Empire continues to be fucking amazing and this issue is everything I wanted Princess Leia to be, but it wasn't.

Anakin & Obi-Wan mini incoming, hope it's a prelude to that era being explored more.

While reading reviews for the comic, I saw a mention of a
Padme flashback
and I screamed very loudly (internally, since I don't actually scream out loud).


Since I mentioned my excitement over seeing Padme in the comics, I have to clarify...I wasn't too fond of Padme's character in the prequels and I was mostly invested in the whole Anakin's fall to the dark side aspect of their relationship. I mean, a large part of his drifting was caused by his fear of loss (of Padme), but he was also being used by all of the people he thought he was supposed to be trusting in, namely Palpatine and the Jedi council. Not only that, his wife was hiding senate secrets from him that she couldn't share on account of, idk, senate non-disclosure or something, which I'm sure he felt betrayed by as well.

While I like all of this political pressure being the culmination of his aggression, I am very excited to see all of the juicy details that were whirling around his head, not only after episode IV but also during his travels and training with Obi-Wan in the new Anakin/Obi-Wan comic. Anakin just seems so much more strong minded than that. I can see how being put on the spot and used as a pawn by two different trusted companions would/could be the cause of mental breakdown, but I am much excited to learn whether or not Anakin had reservations about the Jedi Council's motives during his earlier years as a Padawan.

I also want to know what sort of internal conflict he faced when he learned that Palpatine lied to him about Padme's fate/the fate of his child/children. I ALSO ALSO ALSO want to know if Palpatine actually had a hand in Padme's death, since he claimed to know the secrets of Darth Plagueis (influencing midichlorians to control life/death) or if Palpatine was lying about knowing that much. I would be stoked/sad to find out that Palpatine somehow took Padme's life to save Anakin's after he was wounded on Mustafar.

I'm not sure how much you'll get of the rest of what you're looking for, but I can definitively say that the first sentence of your third spoiler paragraph is gonna be Darth Vader Issue #6, that also crosses over with the same issue of the Star Wars comic. It's pretty brilliantly done, and I happen to've posted that bit on tumblr when it came out to gush about it and got to hear from Kieron Gillen (the writer) as a result. The post has something like 50,000 notes on it now, because it really is just that good.

I can't wait to see what you think.

^ I just looked at your Tumblr post. Glad I did because I was trying to find the complete scene online and I was only finding bits and pieces of it.

I don't mind spoiling everything for myself; I'm mostly interested in seeing the comics for the artwork. I get a kick out of just knowing the story.

Wait, Gillen contacted you, or did he post on your Tumblr? What did he say???

I'm actually going to go ahead and try to get as many of these new Marvel comics as possible since they all look good. I just...I think I cba with Leia. She's always been semi boring to me, I guess because
she had the potential to be a Jedi but decided to be all smoochy with Solo instead
. Blegh.

Hopefully this/these series' will fill in some gaps and help us to speculate what's going to take place in episodes VIII & IX via foreshadowing? I spent a while trying to wrap my head around who Rey's parents are but at this point I just cba because I found her to be a totally repulsive main character and at the end of the day, I realized...I don't care who her parents are.

I might be arsed to care if the comics give me reason to be.

Journey to the Force Awakens has one about Poe's parents and there'll be one about Poe soon, but for the most part they're sticking to IV-V for the main comics, III-IV for Kanan/Rebels, but Obi-Wan & Anakin is I-II.

Also, he reblogged/commented on it at one point, and I said a thing about it. TBH that post has drowned out everything on my tumblr ever since I posted it. xd

I'm such a dweeb. I asked Mr. Howl to get this for me, you know...illegitimately while I wait to get my hands on the original copies. So, I read all the way through Vader and Skywalker Strikes / Showdown on Smuggler Moon...and I never saw the Padme scene! I kept flipping around through all the pages, looked up the exact page number on Google, looked through it all twice...

I can't recall if it was from Skywalker Strikes or Smuggler's Moon (I think it was the latter) because I read this while trying to keep my eyes pried open last night, but I LOVED the scene where
Leia kicks Han in the butt
.

Oooooh, I think you're just reading all the old Dark Horse comics that're a part of Legends now. The only canon Star Wars comic from Dark Horse is Darth Maul Son of Dathomir.

Additionally, the non-Marvel Star Wars comics have their own thread here: http://thelifestream.net/forums/showthread.php?t=16493

Which is like $2 and some change per issue. I'm sort of so cheap that I want to pick all of these off ebay individually but I cba, really.