This project aims to preserve the legacy of all aspects of this esoteric entry in the Compilation of FFVII and to make it available for an English reading audience. More features will be added as more information is organized and translated.


&#8211; IMAGE GALLERY
Download over 2300 screenshots and browse the concept art for this game.


&#8211; VIDEO ARCHIVE
An in-depth look at all available cutscenes and gameplay recordings. Chances are that you'll find some enjoyment out of having the scenes and gameplay explained here, rather than sitting through the videos without a guide.


&#8211; AUDIO LIBRARY
Listen to the tracks exclusive to the Multiplayer, as well as a samples of the different voices that were used for your Online Player Character.


&#8211; NPCs OF DEEPGROUND
Who were the quest givers of Deepground? What were their roles and personalities? The insight presented here with the help of maps and screenshots can't be found anywhere else.


- ONLINE MISSIONS
Over 100 challenges in the form of missions existed by the end of the online service. Some of these were ported over to- or inspired the offline Extra Missions of the post-JORG releases. Here you can also download screenshots organized by mission!


&#8211; SERVICE TIMELINE & VERSION HISTORY
The reader can choose to limit themselves to the short "Timeline Summary", or read the full dissection of how the Multiplayer changed during its eight-month run in 2006. Apologies in advance for the Google Translations, but I didn't want to indefinitely postpone this feature.


&#8211; MEDALS
Clearing challenges and fulfilling certain battle conditions rewarded the online player with medals. The medals didn't really do anything other than being trophies, but they represent yet another aspect of the Dirge of Cerberus experience that only a few thousand people ever got!​

Many thanks to Joel, mecorx, Twilight Mexican and hito for their translations! For a full source reference and list of contributors, see the bottom of the main page.

If you want to contribute to the project with translations, transcriptions, documents, screenshots or what-have-you, let me know via whatever thread or messaging service suits you.

I downloaded an entire folder of FF albums years ago, and I just noticed that one of them is from the DoC Multiplayer mode. 27 tracks in total.

#3
If anybody is confident enough in Japanese to transcribe lots of symbols but perhaps don't feel up to the task of translating it all, please contact me. I have a lot of text that needs transcribing in preparation for the "Items & Equipment" feature, where it's necessary that I compare multiple sources to gain a complete picture. Of course full translations are appreciated, but even just transcriptions are an essential contribution.

lithiumkatana17 said:
I downloaded an entire folder of FF albums years ago, and I just noticed that one of them is from the DoC Multiplayer mode. 27 tracks in total.
Click to expand...
And depending on how you count, only 5-7 of those tracks are new to anyone who has played Dirge of Cerberus all the way through. Many of the tracks on that album are taken straight from Single Player scenes and aren't played anywhere else. Even if you haven't been exposed to the Extra Missions, fewer than half of the themes will be new to you.

In other words the album is more of a "Here are the tracks we didn't fit into the OST album" deal rather than a "Here is the Multiplayer experience" package.

When figuring out which themes were Multiplayer-exclusive, even I had to refresh my own memory. The theme "Time Limit" eluded me for a while, before I found that it is played in the Extra Mission "Shinra Manor Prime". In the online mode you'd hear the theme when time was running out or when a team battle was reaching a climax.

I quite enjoy fiel2c's recordings.

The "True Beast" theme strikes me in particular. Not only are the drums more pronounced in the released soundtrack, but there are pieces where the drumming is either not present in-game, very subdued or having a different overall sound.

In the Audio Library I added a mention of the alternate version of "Fragment of Memory" that is played when you install the Multiplayer.

Some uncertainty surrounds this version of the track, which has different types of reverberations echoing in the background. It is not clear if this is an entirely different track on the disc or if the background noises originate from files separate to the BGM. I haven't unlocked the "Installation Screen Theme" in the post-JORG releases and I don't currently have the knowledge to check it out myself in the original release.

#4
The archive has now received a HUGE update! Feast your eyes upon the... 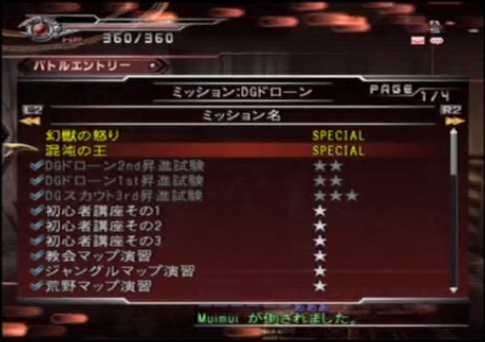 Features of the article:

- Download screenshots organized per mission.
- Read about all over 100 missions of the 2006 era.
- Learn which of the 46 offline Extra Missions were ported over from- and inspired by the online missions.
- Get a glimpse of the multiplayer's sub-plots as you read the mission descriptions.
- View the embedded videos where recordings are available for a given MS.​

A big shout-out to my friend Joel who performed the giant task of translating the text related to the online missions. I can't thank him enough!

My gratitude also extends to Fangu who improved the table formatting and to Tres & hito for their translation aid.

You will find no other single place on the internet, not even among Japanese websites, that provides this amount of information and media about the online missions of the defunct Dirge of Cerberus Multiplayer.

Expanding the article to include data on the beta/2005 era missions probably belongs to the more distant future, as that would require an equal amount of archiving- and detective work as was done for the 2006 era. I do hope however that such an expansion will not remain solely the stuff of dreams.


Via the main page of the archive you can find a donation link. If you donate 5 USD or more you can have your name listed among the project donators! Your contributions help pay the translators without whom none of this detailed information would be available.
C