I'm up for running unsyncd coils with you JT. Need to cross them off my own list.

Joe said:
I'm up for running unsyncd coils with you JT. Need to cross them off my own list.
Click to expand...
DUDE. We shall make it happen!

When are you usually on?

Also I'm in the US right now.

Also I'm in the US right now.

Click to expand...
Ah well, welcome to the country, also I'm sorry for everything you will witness while you are here.

Double post but I am elated. This morning was spent clearing Syrcus Tower and then World of Darkness in success. They were much easier to get into. Beautiful raids, and I even got to be the Stomach Party with Cerberus which is silly but something I really hoped happened.

Anytime there is a special or side area from a Raid I want to be in it. Like A4 and the Quarantine. I always hoped that happened to me and it did and I was happy.

Is it just me, or is the tower a better or moar fun raid than that wossname in Heavensward? Those seem to take forever.

#1,483
Nice to enjoy World of Darkness, we all had it so beaten into us that we despised it. I NEVER got that stupid robe, either.

I always loved Syrcus though.

Void Ark I always found really fun and the aesthetic is nice. Wiping City of Salt is kind of boring visually until you get to Ozma but Ozma can rot in hell.

Yeah I realize I have the benefit of attending these raids now that they are much easier since everybody is well over-leveled for them. I don't pretend it to be some great feat but I did always want to see them completed just for OCD's sake.

Speaking of which, I also did Urth's Fount today (though I quit out of the quest for it awhile ago and forgot so I achieved nothing but bragging rights) and my Leatherworker can now craft Level 56-60 gear (Level 53). Celebrated by making some Amphitere Leather! (I promise not to turn the next two pages of this into every little achievement but it was just something else that happened. It's been a big day for me XD)

I like the Crystal Tower raids better then the HW raids. More varied design, more impressive looking bosses, more interesting looking gear drops, etc. The visual design of everything about them is spot on and I'm always impressed when I run them.

Void Ark is easily the most boring raid as the dungeon design and boss design never varies throughout (Goth) and I find the equips don't feel different enough for me to warrant collecting them (Goth... again). I pretty much just run it whenever I need Machi Pennies and that's it. This is definetly the dungeon that feels the longest to finish.

Weeping City is slightly better as there's a nice visual build-up to the Ozma fight and the gear design varies between classes a tad more. The Machi Matter reward helps a lot too.

Finally got the Hyperconductive Astro's weapon. So pretty.

Half-way to the iLvl 240 Anima SUM weapon. I also now have a pretty steady supply of items to trade for Crystal Sand so I should have the weapon finished by the time patch 3.45 comes out.

Caved and got the Far East optional items. 'Cause this game has a lack of "Yes, I'm hot; no, I don't have to prove it by being half-naked" outfits. It also looked familiar and I realized that it's most likely based off of Lenna's Monk outfit from FFV.

Got 500 player commendations and am stomping around Eorzea in Gilded Magitech Armor.

Starting farming HW Primals. Got the Bismark bird right away, but Ravana's is taking longer. On the other hand, it's pretty fun figuring out when to time Dreadwyrm trance on Ravana so that Deathflare can crit for 15k damage without Foe Requiem...

I am soooo hoping that is Dancer, and not an especially twirly Monk.

If so, I am maining Dancer, fo sho.

Okay. Okay. So hear me out. Supposing that is Dancer... what if all those Dance emotes you've been carefully collecting actually serve a tactical purpose???

Probably not as that would be unbalanced af but still.

It's a new expansion.

Yeah, pretty sure they don't do prerendered cutscenes for just patches. Also looks neat, I like prerendered shit, especially if it's DBZ shit. If that's a new class though, I'm not sure if it'll be distinct enough from the monk class as mentioned before.

It was confirmed that the Warrior of Light's 'main class' was Monk for Stormblood, just as it was Dragoon for Heavensward. I'd love Dancer as a healer though, I base my healing glamours around dancers attire.

#1,492
I'm slightly underwhelmed by the setting, but I'm super excited for it nonetheless. A new XIV expansion is magical <3

Joe said:
It was confirmed that the Warrior of Light's 'main class' was Monk for Stormblood, just as it was Dragoon for Heavensward. I'd love Dancer as a healer though, I base my healing glamours around dancers attire.

Conclusion: The Warrior of Light is too dumb to use magic and near-sighted.

It does makes the most sense regarding the lore behind the jobs. The Dragoon and Monk classes are clearly from specific places (Ishgard and Ala Migo). The same thing goes for Ninja, but the only way doing that one would make sense was if the expansion was in Doma. Paladin is also clearly from Ul'Dah, but there's no natural way to work an expansion into that either.

Bard meanwhile isn't from anywhere (or rather, it's from anywhere people like a good ballad). The most natural place for it to be from is from Black Shroud as that's where the Archers are.

The magic jobs have it even worse. White Mage is all about the Padjal race and has the same deal as Bards do (Black Shroud centered, but can be anywhere). Black Mage is centered around the Eorzean beast tribes and is Thanalan centered. And while both Archanist jobs are based on jobs from other nations, both those nations fell several Astral Eras ago (Nym and Allag). Scholar probably has it better then Summoner does as we really don't know all that much about Nym except that it was in La Nosca while the Allagans come up anytime anything to do with ancient primal come up, and everyone knows that they were a nation that deserved to fall.

This is only speculation though. 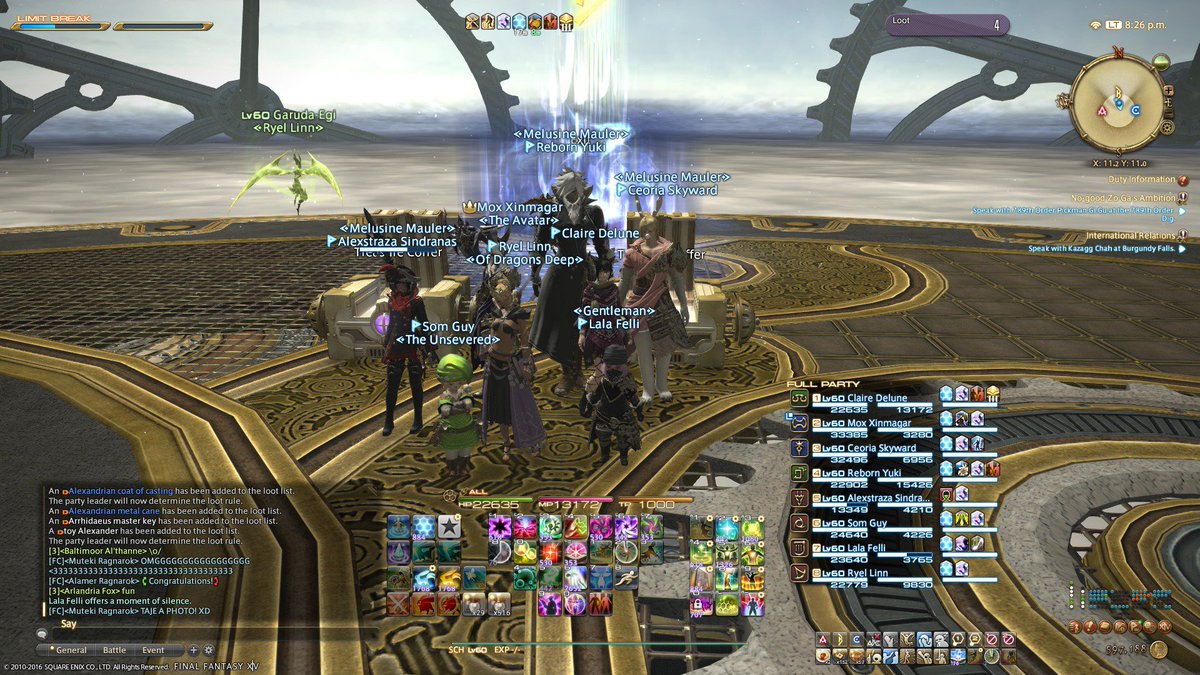 It's definitely a monk, not a dancer.

I also considered that it could be Yda, but I'm not sure yet.

Palace of the Dead is getting another 150 floors and new Aetherpool weapons. Anima weapons are getting an upgrade.

Speaking of Palace of the Dead... the most common drops I get from the bronze Accused Hoard chests are IV materia, and the Lvl.1 glamour gear (like the Thavnairian gear). I didn't expect that to be in there, not that I'm complaining...

I need to join group tackling Palace of the Dead. I want to get to these awesome fights and weapons.

Did Turn 2 today, I'm slowly chugging through the backlog of Realm Reborn content I never got to do (just Raid content mind, I have absolutely zero interest in PvP). Also got to run Syrcus Tower today with ^ this fool.

It was fun. I got a minion.

Had a good Wondrous Tails haul today today, 5 Mhachi Matter, 1 Mhachi Demimatter (turned in for sweet V Materia which I am selling for precious gil), and 300 Lore Tomestones which netted my Lore Armor.

I'd post a pic, but as getting the ilvl 260 Anima weapon only takes around two weeks (or less) if you do it right; I think I'll wait.

The good news is that I won't have to spend 1k Scripture tombstones on the Sharlian weapon for my summoner and and can instead finish getting my ilvl 260 armor. It also means I can get the new PotD weapon for my Astro instead.

Speaking of PotD, give me a shout if I'm ever on at the same time you're on Jason. Floors 1-30 can totally be done by two people and Floors 31-50 can be done if you're careful/have a healer. And I've got a WHM to level...