Those hotbars... yes please, finally I can set up my hotbars to actually have the layout of my hotkeys (3x4).

And Anima weapons aren't getting delayed until the 3.55 patch. Nice. Wonder how bad the grind will be this time...

Chocobos are back for better and it looks like forming parties for specific duties will be a lot easier.

Stormblood pre-order announcement will be live on the 20th, they'll start taking preorders on the 24th, release is (probably) June 20th. Linky: http://na.finalfantasyxiv.com/stormblood/

idk if this was already known / poasted though

Should I update the thread title?

We'll update it on release. Still got another 2ish content patches to go of Heavensward.

I want to know what the pre-order/collectors edition content will be like. If they do early access for the pre-order again I'm sure that'll be enough for me anyhow. I would say if you're having trouble getting a good weapon buy the 250 crafted weapon off of the market board. Ater that you can clear A12N repeatedly for tokens and buy the 270 tome one. The weekly restriction will be removed tomorrow. We will also have cross server PF from tomorrow so I will be able to help anyone out as long as i'm not raiding.

My group did something pretty funny last night, we killed Faust (A9S) in 47 seconds, which works out to be the 7th fastest kill in the world 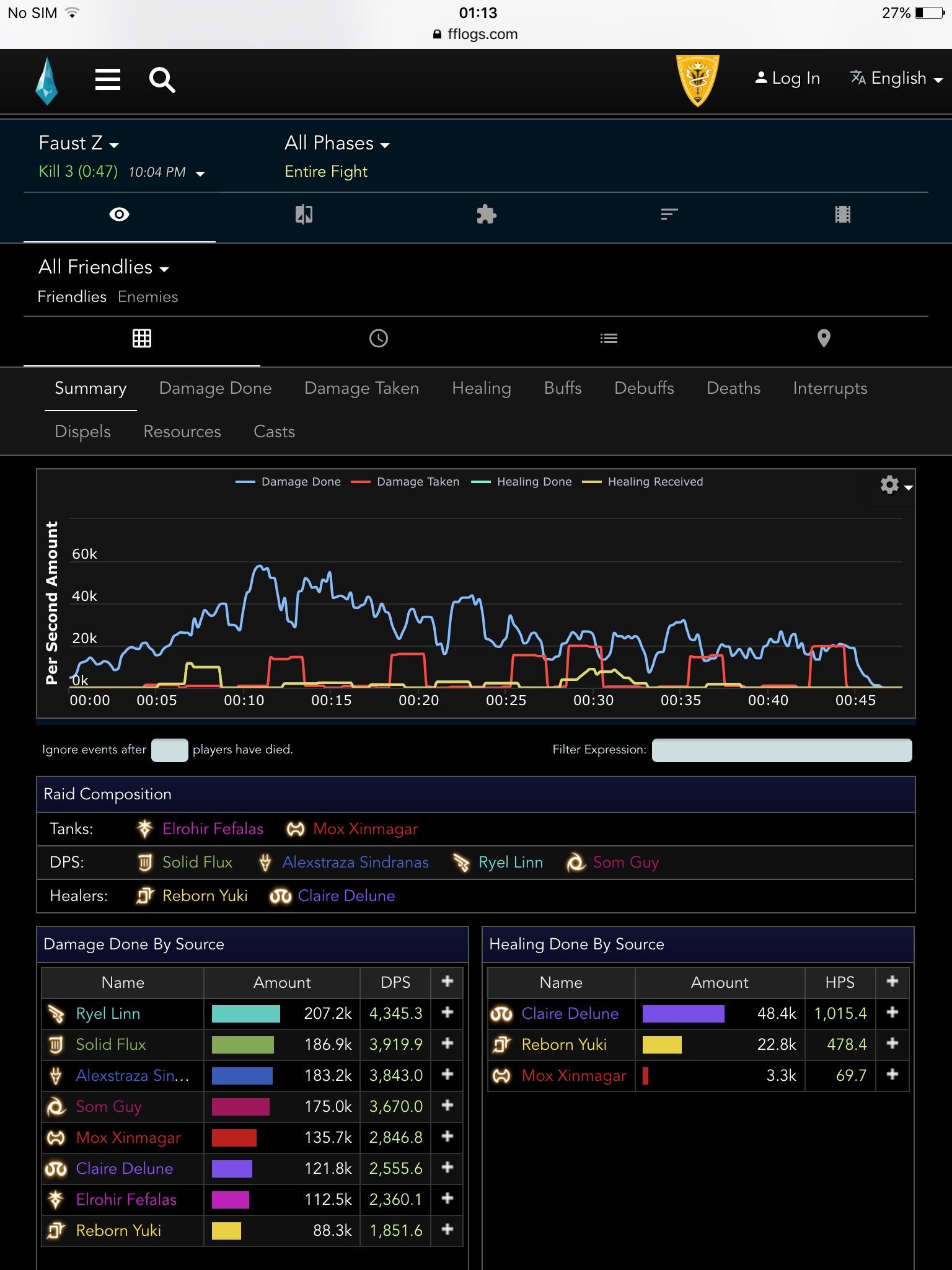 My damage also ranked 6th highest for all healers on the fight in the world, but 3/5 of the people above me had solo enhanced balance and slow kill times (in other words cheated their parse) so I count my self as 3rd place

Click to expand...
Somebody must have dropped a "B" Mark on that fruit. Cyka bylat!

Cross-server PF should definitely help with getting a group together. Is the duty finder cross-server already too?

Speculation based on the released item lists...

One of the new glamour sets is called Leonhart and we're due for another Veteran Reward tier. I'm thinking it's going to be Squall's gear.

The new Raid armor is ilvl 260 so that'll help in saving up for Shire Weapons/Accessories and cut down on farming Alexander Normal.

The new Primal Weapons are ilvl 265 so don't bother if you already have Shire Weapons.

The new Anima weapons aren't specified yet, but if they follow the pattern the Zodiac weapons did, then they should end up at ilvl 275. There's probably only one more major weapon upgrade as there's only one replica weapon being released.

It'll be interesting to see how the new Triple Triad tournament system works. On the one hand, the last couple of systems were highly abusable so there was no point in getting first. On the other hand, if you had good strategy, then the NPCs gave a reliable number of points. Making it so that the PC opponents are random is probably a good change though. For one thing, everyone will have the same handicap when it comes to 5* card limitations...

It's cool that the sightseeing log is finally getting used for something.

Vivi and Anima minions! The Airships are getting miniatures!

O_O So many new Orchestron rolls... Really hope that they do what they did with Alexander and give a lot of them as quest rewards. It also looks like all the primals drop their OSTs now.

One of the new glamour sets is called Leonhart and we're due for another Veteran Reward tier. I'm thinking it's going to be Squall's gear.
Click to expand...
It was shown in the patch preview, Squall's outfit. I'd recommend watching that (I posted it two pages ago) if you haven't already. It looks ridiculous on a Lalafel.

So XIV is doing a callback campaign now.

The tl;dr is that if you haven't played in over three months, a friend can invite you back. You get tokens that you can exchange for some high level gear, a weeks free game time and free teleport tickets. The person inviting you also gets some bonuses.
You can invite up to five people back, though I've invited four rl friends for the time being.

If anybody heres wants an invite I can send them one, so long as I'm on your friends list. I think this applies mostly to the likes of Avec, Force, Ami and maybe some others I'm missing. I'm sure somebody else from TLS can send invites out too, if people are interested.

You can but that's very slightly a different campaign. More or less the same rewards on both sides, but I think the recruited person levels up quicker.
Pm me your email if you likey.

Curse them and their free days.

Joe said:
You can but that's very slightly a different campaign. More or less the same rewards on both sides, but I think the recruited person levels up quicker.
Pm me your email if you likey.

Curse them and their free days.
Click to expand...
Specifically they get some trinket which boosts their EXP level, but only after playing for X number of days. Pro Tip to new players: Stick to the story until you hit level 15 then stop by Hall of the Novice. Do all the tutorials there. Awesome gear that will last you until around Level 22 and a ring that boosts all stats and experience.

I feel like you've been struggling with this for months.

Other pro tip: stay with the MQ until you have to choose Grand Companies which is when you get your first mount. It really speeds up getting around the main zones.

^. Also use teleport, don't worry about the cost. Why walk when you can teleport?

(WoW doesn't have that, which makes it a grindier game)

#1,594
Logged in for the first time in months today after struggling mightily to get the damned updates to download last night. Did a couple of fates. Rusty af.

#1,595
Holy crap there are so many kinds of high level gear now. How the hell are we even supposed to get any of it? What is it with this game and it's 20 million different currencies?

I thought the advantage of taking the off time would be that the previously high-level stuff would be considerably cheaper/require less grind to get. But, if I'm reading this right, they all got moved to requiring some currency you get from the Clan Hunts? Ugh.

ForceStealer said:
Holy crap there are so many kinds of high level gear now. How the hell are we even supposed to get any of it? What is it with this game and it's 20 million different currencies?

I thought the advantage of taking the off time would be that the previously high-level stuff would be considerably cheaper/require less grind to get. But, if I'm reading this right, they all got moved to requiring some currency you get from the Clan Hunts? Ugh.
Click to expand...
Clan Hunts are the least cost effective way of getting high level gear. Your baby is tomestones which are liberally awarded from high level raids and roulettes. And even the main story raids offer these goodies now. Basically catch up on the MQ and then spam roulettes to turn stuff in at Idyllshire. A grind, yes, but better than those damned hunts imho.

#1,599
Yes I believe I finally worked out the tomestones of lore are the best bet and they aren't being stingy with them. But hot damn that was not easy to find anywhere.

And why has the esoteric gear been removed and locked away behind those hunts? First of all, the Heavensward Artifact Job Gear should have been given with the level 60 job quests. Then they make it even harder to get?

You can get ilvl 245 gear (better then Lore gear) from the latest Expert Roulette.

Dungeon grinding is your friend in getting gear and tomestones. All the raids are out now too, so do those. If you need to get up to ilvl 200, then Void Ark is a cakewalk now (and that gives you lore). Your best bet is to unlock all the dungeons and run the highest ones you can to get your ilvl up/get tomestones.

I really don't get why old tomestone gear is locked behind hunts. Except that that's what happened to the gear in ARR before HW came out too, so I guess there's precedent for it? That said, if you want to do want that gear, do all the stacks of Huntbills every week/day and you'll get a steady supply of Seals that doesn't require you to be on at weird hours (the amount of hunts I find because I'm on when the rest of Europe is off is hilarious).

But yeah, get good at doing dungeons and you'll get a lot of gear that way. If you're in a hurry, Healing/Tanking will get you in the roulettes faster.

For weapons, go do Palace of the Dead. It doesn't have an ilvl requirement to get in and it'll reliably get you an ilvl 235 weapon in a day or two if you spam it. It also gives you tombstones if you do it with a Lvl 60 class...
You must log in or register to reply here.
Share: Facebook Twitter Google+ Reddit Pinterest Tumblr WhatsApp Email Link
Top Bottom