#1
As the title says, discuss the novel here. I guess you can assume there will be spoilers from said novel posted here.

Summary of Tifa's part that I've seen posted on resetera


Tifa and Cloud use to play as neighbors before Thea, tifa’s mom passed away. Thea use to say how handsome Cloud is and see that made Tifa happy. Tifa was seen as a prize to be won in her hometown except by Cloud. My head canon is this is the reason Cloud got into fights with the boys. Cloud helped Tifa search for Tifa’s cat Tifa and Cloud both admire eachother from a distance when their friendship drifted. Cloud gathered his courage and awkwardly asked Tifa to meet him at the water tower and then ran away. Tifa told Cloud she can meet him at midnight. Tifa dressed up and was expecting Cloud to confess to her. After talking with Cloud at the water tower and understanding how normal Cloud is she went from crush to love. (She loved Cloud for being Cloud. This debunks that dumb theory that Tifa only noticed Cloud because he joined SOLDIER) When Cloud left Tifa cried. When she received news Shinra troops were coming to Niblehiem she went to check with Claudia if Cloud was coming Claudia discovered Cloud only told Tifa he wanted to be in SOLDIER after Tifa asked her if Cloud made it in and 😏. Yeah mama Cloud totally picked up on the two teenagers falling for eachother. Claudia and Tifa cooked together. Tifa has a scar after the Niblehiem incident. She was taken to Midgar to get seen by scummy doctors. They patched her up but stole her money so she would pay double. Worst yet they objectified her and took a picture of her chest. To save money Tifa use to work at a bun stall as a vendor She met Barret and Marlene at Seventh Heaven and bought it to give Barret and Marlene a place to stay because they were in poor living conditions. Marle met Tifa when Marle needed surgery and the doctors from sector 8 showed her Tifa’s chest photo during Tifa’s surgery. It made Marle mad and protective over Tifa. Direct translation about the promise scene. “It was just an idea, but from the moment it was made, it became an irreplaceable promise. And that night, when Tifa realized that the Cloud she admired was just an ordinary boy, she fell in love with him. The kind of ‘love’ that makes two people want to spend time together.” ]

#4
I have to say I love the "they objectified her and took photos of her chest" bit. A not so subtle dig at those fans who see Tifa as nothing but her chest. The thing about "they saw her as a prize to be won" makes the same point.

I also really like the important distinction being drawn between a crush and love.

Cloud and Tifa's love always reminds me of the Yeats poem, "When You Are Old". (very short poem, don't worry)

So Tifa does own 7th Heaven? Of course nothing in the Remake suggested she didn't, I guess I'm just surprised she doesn't live on the premises if she owns them.

I'd love to know the details of the Marle story. I mean, it's not out of order for surgeons to show potential patients photos of their work, so there must have been something gross in their manner of doing it that made her angry. Did she then deliberately seek out Tifa to inform her that the doctors were scumbags and protect her from further exploitation? She can't have known Tifa before this incident, since it says they met because of it.

Is there a single doctor anywhere in the world of FFVII who honours the Hippocratic oath? They all seem to be unprincipled money-grubbing quacks.

Audrey is currently building a pretty detailed summary thread over on Twitter.

#6
I find these bits particularly interesting:

Audrey said:
- When Tifa was younger, only she and 4 other boys were around the same age in the village
- She often played with 3 of them, and their parents called them the "Group 4"
Click to expand...
Audrey said:
- Her mother passed away due to illness
- The women in the village helped raise her
Click to expand...
So if there were only 5 children around the same age, can we hc that the village didn't have a school and children were home-schooled or taken to private classes? I still find it hard to imagine the real size and population of Nibelheim, tbh.

#7
It would be like a village in the real world. Formerly much larger, but people leaving at a faster rate than can be replaced due to people leaving for the big city. I imagine whoever was left was either using a preexisting school or they did apprenticeship.

#8
Maybe like a Scottish island with a small population, where all the kids, of whatever age, are taught by one teacher, then eventually have to leave to get an education or find work.

I wonder where all the people who work at the reactor live.
Or maybe the reactors don't need any live employees?

I really love what I've seen so far of the characterisation of Tifa in this novella.

Edit: PS If Cloud wasn't playing with the other kids, I wonder what his childhood self did all day.

#9
The reactor is probably not active post-Jenova Project. Nibelheim doesn't look like it even uses modern electricity.

#10
Something that was said about the flashback in Reactor 1 by the devs and then reading the translations makes me wonder if Tifa is being somewhat unreliable as a narrator as to the exact events. Like not all of it, just....some of it.

If so, thats well done meta for later...

How long is the novel?

#13
I'm intrigued that Tifa appears to be telling Aerith the whole story of the water tower promise.

Do Aerith and Tifa kiss. I just need to know this

#15
Since Barret was mentioned I think the other party members are listening at points as well.

#16
Which leads me even more to believe at least some of the details she's telling are wrong. Though which ones and in which ways, I guess only the game will reveal.

Does this book cover how Tifa actually met Barret and joined Avalanche? That's always been a bit of the story that never got explained before.

Aerith we know less of... but we do know that once she met Zack she fell hard and fast for him and they had a relationship of over a year and a half before Zack went to Nibelheim. And then she wrote him 70+ letters over a five year period in the hopes that she'd find him again.

It's essentially a story about two straight woman talking about the men they are interested in (before Aerith is interrupted and prevented from talking about Zack).

@ Odysseus - I believe it says that Tifa met Barret and Marlene in Sector 7, and bought the bar from her savings working in the bun shop so father and daughter would have a safe place to live.

#20
Ah beat me to it about Tifa, Barret and Marlene.

I find it interesting how the novel actually specifies that Tifa likes Cloud but not the type of like to spend time alone yet, so she's at the very start of her crushing the night of the Water Tower.

Edit: NVM she went from that to deciding she was in love/falling in love that night apparently

Something other tidbit I read on Twitter was about some White Materia lore, that the materia is passed down from generations to generations until Aerith inherits it from Ilfana, looking forward to Audrey getting to that bit.
Last edited: Jul 17, 2021

There's this stupid magazine ad I keep trying to find that square put out to recruit programmers for their PC ports where it's like "geeks like you will never get a girl like this" with a picture of Tifa so I can call out Square for objectifying her themselves, but I can't find it for the life of me. 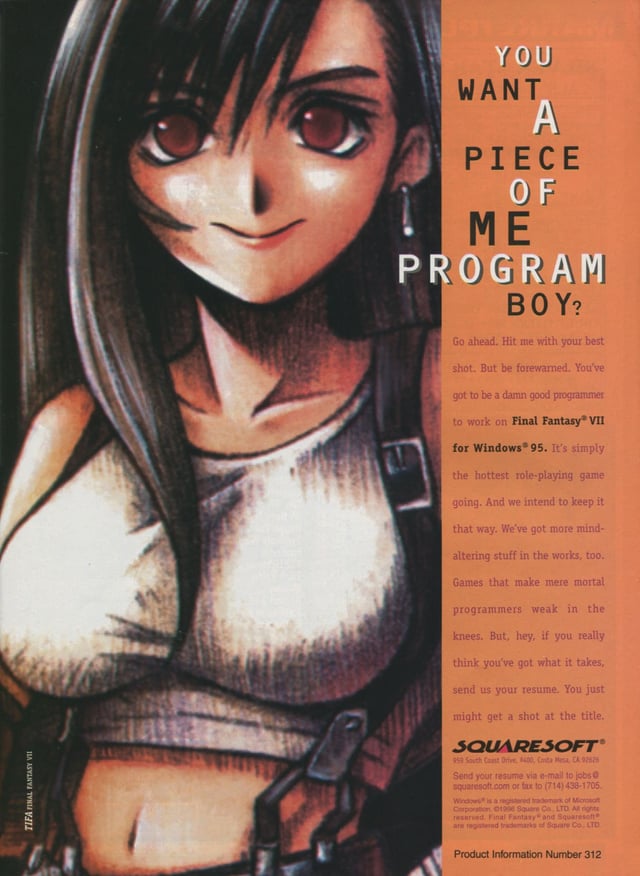 Yep that's it. Thanks.

LicoriceAllsorts said:
"they objectified her and took photos of her chest" bit. A not so subtle dig at those fans who see Tifa as nothing but her chest
Click to expand...
Also Square:

Ok I did the bit

#25
Twitter is talking about Tifa having metal in her body from the surgery. Wonder how accurate this is to the actual contents of the novel and whether or not the metal actually does provide Tifa with extra defense.