I'm actually REALLY looking forward to how he'll shake things up in terms of team comps. The other interesting thing is that utilizing his kit really well vs. being absolutely useless with him is a pretty significant gap. I'm glad that he's a 3 star hero, because people will really want to get good with him, and he's a great dive option for players who really like to engage and break away. They did a really good job of demonstrating how he's similar and VERY different from D.Va & Winston. Stoked for him to be in the game.


Also, if tiny little Hammond isn't doing the Hamster Dance on top of his mech during his dance emote, I will be rather disappoint.

I dunno that's all I got


So, if you watch the start of Kolorblind's his stream, you can see what the original colorblind filter he was using before looks like. At around 2:05:00 – he gets to check out the new colorblind options in the game on the latest PTR patch. It friggin' makes my day ta see options like this that make SUCH A MASSIVE difference for players with various disabilities. – https://www.twitch.tv/videos/312970765

https://twitter.com/i/web/status/1047547020628520961
One: This Halloween Legendary skin is fucking amazing. I absolutely love it to bits, and cannot WAIT to get it. This and Cultist Zenyatta will be best bros.

Two: The Overwatch community manager who runs their Twitter account is absolutely the best about the replies today:

Our newest hero is Elizabeth Caledonia Ashe and her number one companion B.O.B.
https://playoverwatch.com/en-us/heroes/ashe/

.... isn't that already a league character?

I mean... exactly as much as she's already a character in FF XII?

– Which is to say all three of these games have a female character named Ashe with no other connection to one another.

#585
Disappointed she's a sniper, cause I really like her design.

I'd argue that you should be pleased then, because she's VERY MUCH not a sniper.

She's best suited for a mid-range that's closer than Soldier: 76, but a little bit further back then McCree.

She's designed to benefit from high accuracy, but isn't at all built for long range. She can use iron sights to deal more damage at a distance, but it slows her rate of fire and movement speed. That's mostly just to give her elements that players with a high skill ceiling can make heavy use of, though. It's more a tool to utilize AGAINST snipers, rather than allowing you to act AS one.

Firing from the hip has a high rate of fire with decent damage, and while her Coach Gun is a solid mobility tool, it's also a way to keep opponents at her preferred mid-range. Her TNT is on a timer and while it'll go off when the fuse runs out, you can shoot it to detonate it, thus letting people who're really good toss it just over a shield and skillshot it out of the air. In tandem with the Coach gun, you can also use it at close range and back off quickly and damage clusters or force back an opponent who's a bit too close.

B.O.B. is a mid-range Ultimate, where he dives in and pops a group up into the air — meant to let Ashe shoot them out of the air if there's a cluster she's being overwhelmed by at her optimal range. Then, from that point until the Ultimate ends, while B.O.B. shoots at targets like a turret until he leaves, B.O.B. also acts as a stationary character — you can armor/heal/boost him, just like you can freeze/sleep/discord him, and he can capture/contest points & push/stall payloads.

I have a feeling she'll see a lot of synergy with Wrecking Ball, Orisa, Torbjörn, Doomfist, & Lúcio because of all the displacement and area denial they're capable of in tandem, and how well they can cover that general range, and harass the enemy out of spaces that're too close or too far. 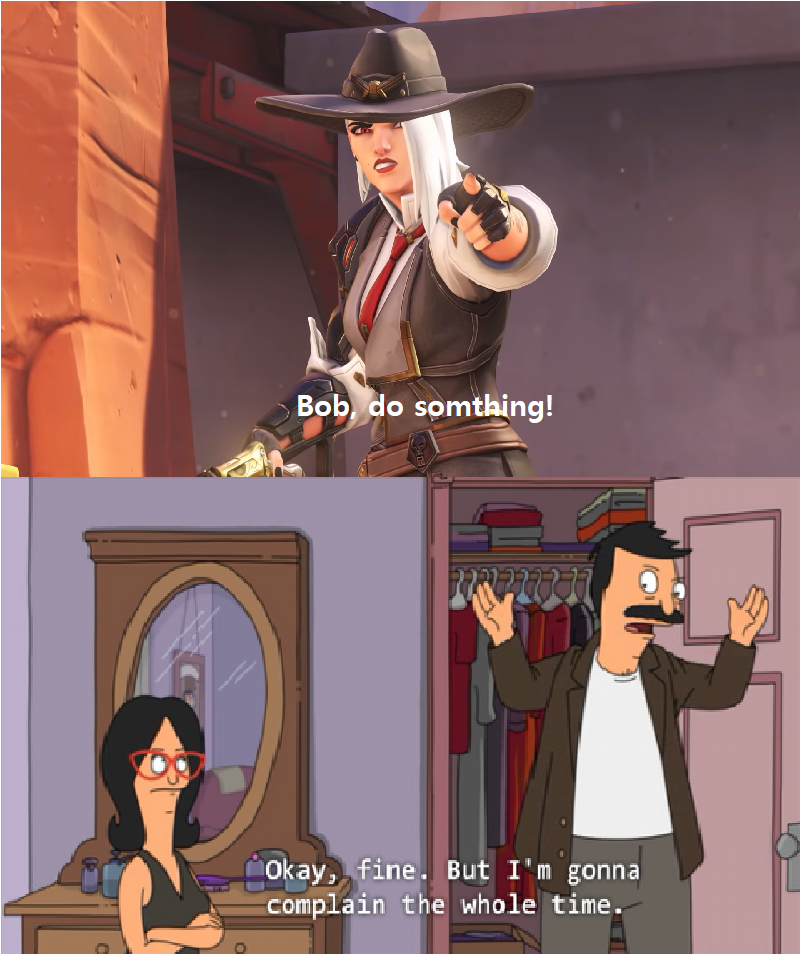 #588
I checked her out on the PTR, and she's definitely a character I wanna check out more once she launches, when I can really get a chance to play her in a regular game.

I'm hoping that they change it, so that it gives B.O.B. golden arm cannons when you get her golden gun.

I like the fact that Bob can also solo secure a point also.

The new story comes with the exciting revelation that


we have another confirmed LGBT hero: Soldier 76/Jack Morrison

Joe said:
The new story comes with the exciting revelation that


we have another confirmed LGBT hero: Soldier 76/Jack Morrison
Click to expand...
Well, it's always the ones you least expect.

I think it's great to be seeing more diverse LGBTQ+ representation across all media, myself personally. I don't think LGBTQ+ people should fit a stereotype or 'be what you expect'.

In addition to that news just just shortly after that reveal was dropped,

She turned to the next one and almost dropped the photos in surprise. She’d never seen the photo, but she recognized it immediately. Jack looked so much younger. He had just stepped off a military transport for leave. It was the other person in the picture that surprised her—a dark-haired man, dressed in a casual, black button up shirt. Jack’s arm was around his shoulder. Vincent.

“Vincent… I haven’t thought about him in years,” Ana said. “Still keeping a candle lit for him?”

“You’ve never looked in on him? You must have been curious. All the surveillance power in the world. I bet Gabe would have put a Blackwatch agent on him if you asked,” Ana said

Jack laughed. “He got married. They’re very happy. I’m happy for him.”

Ana was unconvinced. In the early days, Jack talked about him often, floating a dream that the war would end quickly, and maybe he’d have a chance to return to a normal life. But a normal life was never the reward for people like us.

“Vincent deserved a happier life than the one I could give him.” Jack sighed. “We both knew that I could never put anything above my duty. Everything I fought for was to protect people like him… That’s the sacrifice I made.”

“Relationships don’t work out so well for us, do they?” Ana said, unconsciously running her thumb over where her wedding ring used to be.

“At least you and Gabe managed to have families.”

The pair lapsed back into silence.
Click to expand...
Gabriel Reyes AKA Reaper has/had a family at some point...

X-SOLDIER said:
Gabriel Reyes AKA Reaper has/had a family at some point...

Click to expand...
This has been alluded to at least once before. If I remember it was during the Christmas comic a few years ago that shows all characters spending time with their loved ones or thinking about them. Widow was shown at her husband's grave and Reaper
was watching over a Latino family
I love the lore of all this far too much.

This is everything to me

I unabashedly love these particular event skins and the way that they've been theming them around the mythologies.
I think that they're some of the best skins yet, and it just gives me all the happy Dynasty Warriors memories.
They're just SO INCREDIBLY PRETTY.

The Korean Overwatch showed off Brig's Epic skin early instead of Zen's:

Also, I'm gonna make a guess at the last one for this event:

I'm gonna bet that it's Soldier: 76 as Liu Bei. In Romance of the Three Kingdoms, Liu Bei, Zhang Fei, & Guan Yu were the three really close companions, and it matches how Soldier, Torb, & Rein's characters are interconnected in Overwatch. By the same token, Lü Bu also gathers up with a number of defectors and moves against Liu Bei much like Blackwatch vs. Overwatch.

While Genji fits really well with Zhuge Liang as his advisor, all of the other connections are way too good for Soldier, and with Hanzo as Huang Zhong, it'd be a bit weird for his little brother to be Liu Bei in that dynamic. I'd be interested to see if we ever get the other two Tiger Generals, Ma Chao & Zhao Yun at some point in the future, since it seems unlikely that they'll be part of this, too.

I feel like 76's connection to Rein and Torb is nowhere near on the same level as Rein and Torb are as a duo. Those two are presented together a lot in game and side material with a pretty familial connection. I couldn't see 76 meshing in with them with the same bond. Torb and Rein just fit as sworn brothers so the Zhang Fei/Guan Yu representation is well used here.
To add to that, Lu Bu was a far cry from Liu Bei's biggest obstacle and 'Antagonist' if you want to put it that way. Cao Cao definitely takes that honour so I'm not invested in that angle.

I would much rather see Genji as Liu Bei simply for the Zhuge Liang connection. Plus if you really want to dive into it (which I don't think the purpose of these skins is but) Huang Zhong was originally an enemy Liu Bei had to contend with before they buried the hatchet.