Somehow missed the announcement about microtransactions amid a busy work week.


This is utter bullshit. It's getting less and less surprising that this bullshit is happening but it hurts that little bit more when it's a game you're excited about.

Force is dead right with what he said. We don't know if the grind or progression will be tweaked to encourage spending on red orbs. That's the price of having this in game from the beginning, we will never know how it impacts the finished product.
And yeah. Why wouldn't they do this? It's the same story with any company charging for anything in their game. It's there because they want you to pay for it. 'Player choice' and 'giving players a headstart' is utter shite.

We'll see if they backtrack before release but eh. Easier to do what Shadow of War did and make a year's worth of money off their model until sales drop, then cut out the microtransactions so they look better in the eyes of consumers.
Last edited: Sep 29, 2018

I believe the director said it would be the same as in DMC4 , which if true would mean it doesn't affect the progression system at all (it had MTX but the game threw massive amounts of orbs at you that were in line with previous games).

However the only way to know if that statement is true is to probably buy/rent the game given reviewers track records (Aside from stuff like Jimquisition or TB, RIP) for totally downplaying or completely glossing over the impact of MTX in games.

Heres hoping the statement is true and it's not "that bad" but ooof its still a worrying trend at the end of the day.

Lucis Caelum said:
Japanese voice cast, a first for the series, since the first game it was always english dub only.

Click to expand...
for the games, the special edition version of dmc4 was technically the first but this is the first where it's there from outset. this seems to be becoming more common with games that traditionally only had english voices even in japan (resident evil has started having japanese voice tracks included or added later, bayonetta started out english-only but started having japanese voices too from the second game and retroactively added them for the first, that ps vita silent hill had japanese voices but silent hill is basically dead now).

Interesting, Lady's face model is the same as Crowe's from Kingsglaive.

Yesterday at New York Comic Con they showed some new weapons and footage. Currently off-screen footage at the moment.

Returning weapon from DMC3, the three nunchucks Cerberus. This time with new special moves and with 2 new elements, fire and electricity (in DMC3 it was exclusively an ice-type weapon)

Faust Hat, a special weapon that uses Red Orbs to attack (with certain moves being more expensive than others) but that gives a lot more red orbs in return if you land attacks on enemies (while the enemy also wears Faust Hat?).

There's a weapon that uses Red Orbs to attack. This gives you a chance at getting more Red Orbs. You can buy Red Orbs with real money.

Sounds a lot liiiike gambling to me.

The difference is that you are 100% guaranteed to get red orbs with it.

But is the hit rate higher than the return rate?
Fundamentally you could have the enemy drop red orbs which fully charged the weapon but to defeat said enemy you need a full amount plus a bit.

#84
Whats the trade off, if you aren't able to lose red orbs with it? Why even have the red orb mechanic in it at all?

Dante can cary up to 4 weapons simultaneously.

Bone Daddy said:
The entire timeline causes my head to hurt.
Originally I thought pureblood demons like Sparta didn't age same with pureblood angels.
We then have the spawn of said angel and demon who do age but have no general progression of timeline.
FOR THE LOVE OF GOD JUST TELL US IF YOJR IMMORTAL OR NOT!!
Click to expand...
From Hideki Kamiya (director of the first game):

Hello everyone, today we have an important update on Dante’s theme song “Subhuman.” Read on below:

Earlier this year, we debuted Dante’s new battle theme from Devil May Cry 5, “Subhuman”, performed by Cody Matthew Johnson feat. Suicide Silence. Shortly after the song’s reveal, we were made aware of unfortunate news and allegations about the track’s main vocalist Eddie Hermida. While the song was written and recorded in-game well before such allegations, we’d still like to ensure, to the best of our abilities, that your experience with the game ultimately goes unmarred. As such, our development team, producers, recording and mixing teams have worked hard to find and implement a new vocal track by Michael Barr.

It is worth noting that the hard work of the Suicide Silence band members, as well as song writers Cody Matthew Johnson & Mark Heylmun, remained intact, as they were not involved with the incidents. As you hear the new track in new promotional materials and in-game, please expect the instrumental parts to sound the same as before. In-game credits have also been updated to properly reflect the new recording.

We hope you continue to look forward to Devil May Cry 5 when it launches on March 8, 2019 on Xbox One, PlayStation 4 and PC.
Click to expand...

Dante’s new take on the classic Cerberus devil arm gets more screen time along with new takedowns from Nero’s Buster Arm Devil Breaker, but the real star of the show today is our third, and final playable character, V. 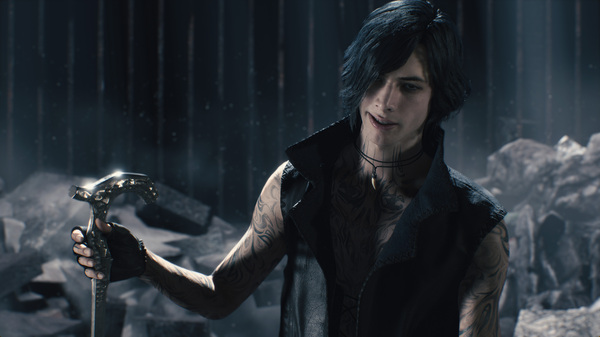 V brings to the table an entirely new play style to the Devil May Cry series, using the most unlikely of weapons: a cane. At first this seems to pale in comparison to Dante’s and Nero’s arsenals, but that’s where V’s three unique demons come in: the thunderbird Griffon, the swift panther Shadow, and the towering Nightmare. And the best part is each demon is controlled independently, which lends itself to sick and over-the-top combos. I can’t wait to see the craziest of combos when you get hands-on time with V. 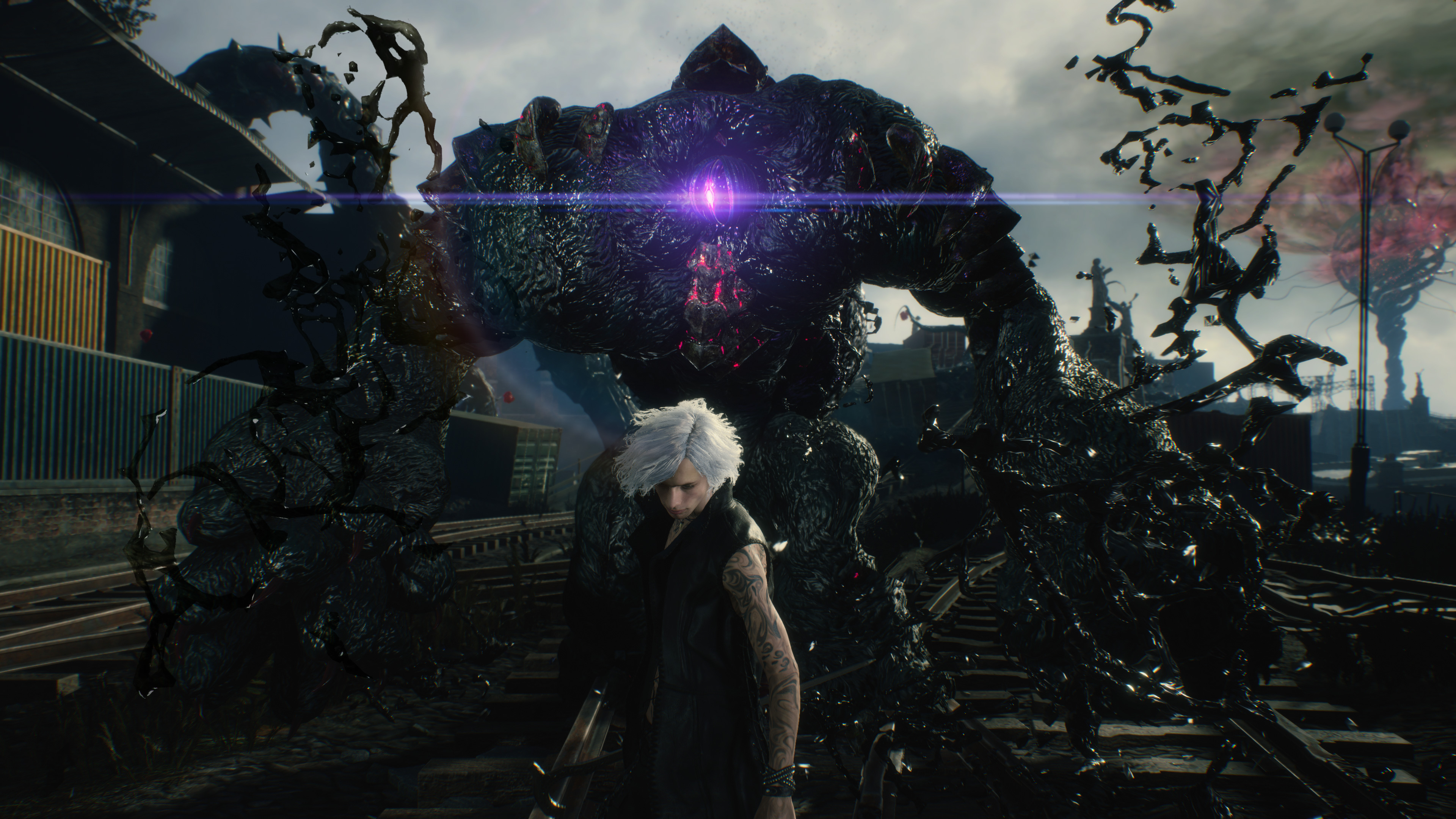 Speaking of seeing others in action, you may have noticed a couple of scenes in the trailer where Nero, Dante and V fight demons alongside each other. That is our brand-new cameo system, made specifically to complement Devil May Cry 5’s single player gameplay. Here’s how it works: 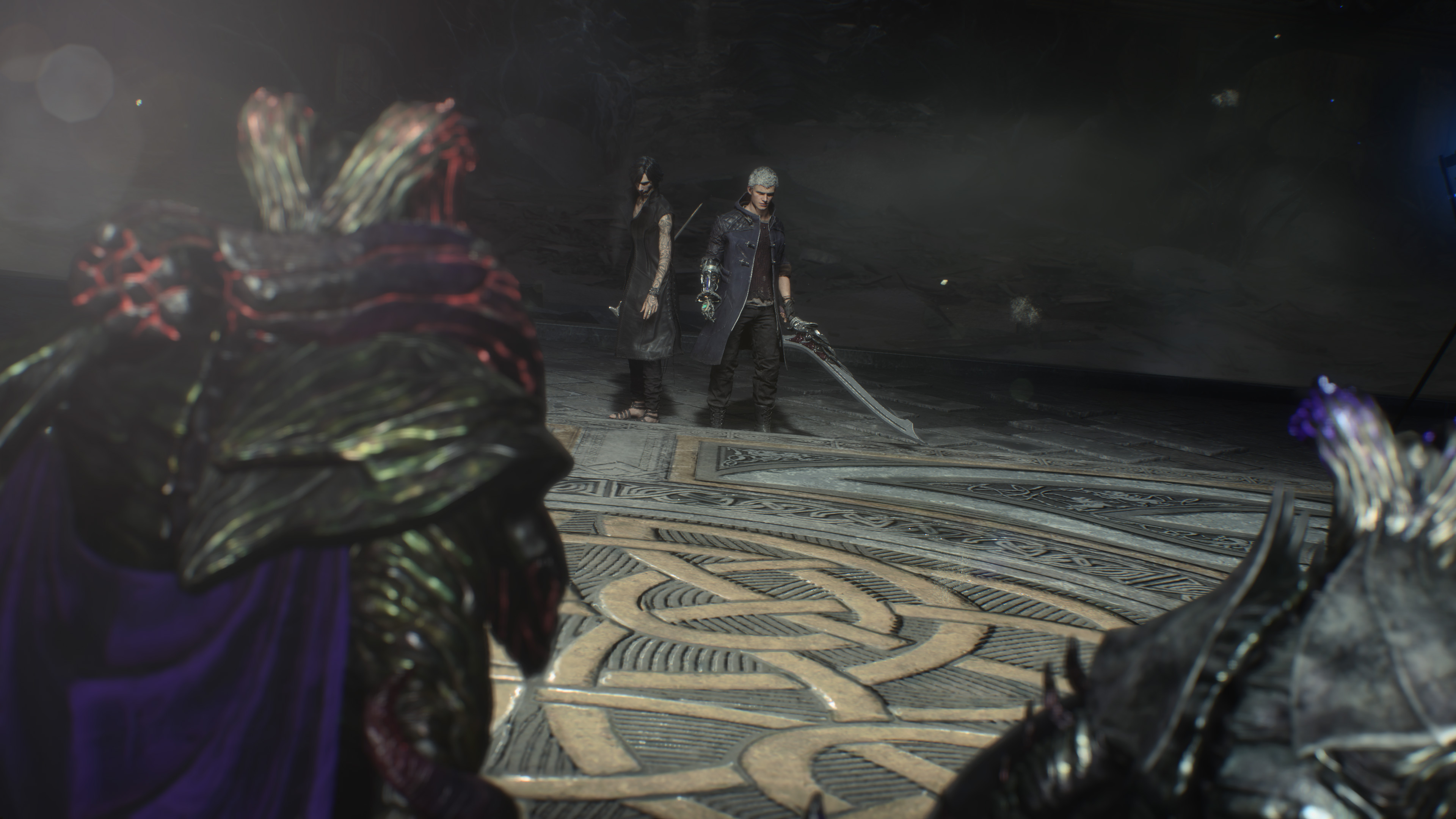 The game is primarily a single player experience, but director Itsuno-san and the team really wanted to tell an epic story with three distinct perspectives and play-styles, where the main protagonists run into each other and collaborate from time to time. So to make that a reality, they’ve implemented a system where, while connected to the Internet, players will make guest cameo appearances in each other’s games in real time, or through ghost data gameplay recordings. Depending on the mission, you’ll see another player in the background, but in other cases, you’ll actually be slicing and dicing demons side-by-side with another players!

Again, our focus is in providing a single player experience like no other, so this cameo system also ensures the experience is always smooth as possible with no downtime. 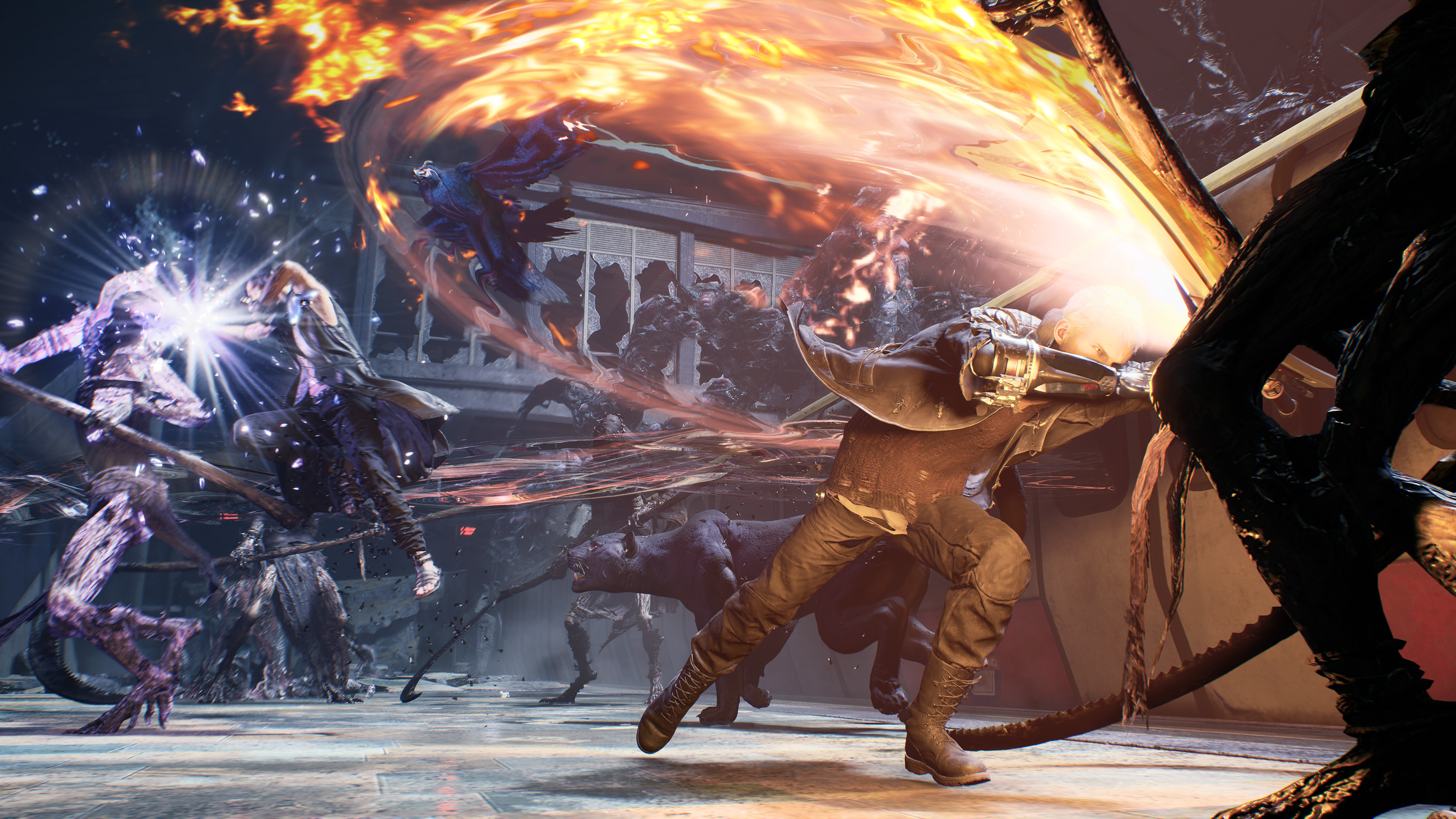 As you conclude each mission with a cameo appearance, you’re given the option to rate the other players “Stylish” if they put on a good show. Just make sure you’re on top of your game too, as a “Stylish” rating can come with useful rewards.

Just be mindful that some missions will be strictly single player, especially as characters split up to explore different areas, so if the story doesn’t have any characters crossing paths, the gameplay experience will reflect that. And if you only play “offline,” you’ll actually be seeing ghost data gameplay recordings of the development team instead of other players’.

Now for the last two bits of stinger news at the end of that trailer… Spoiler ahead if you haven’t seen the video yet! 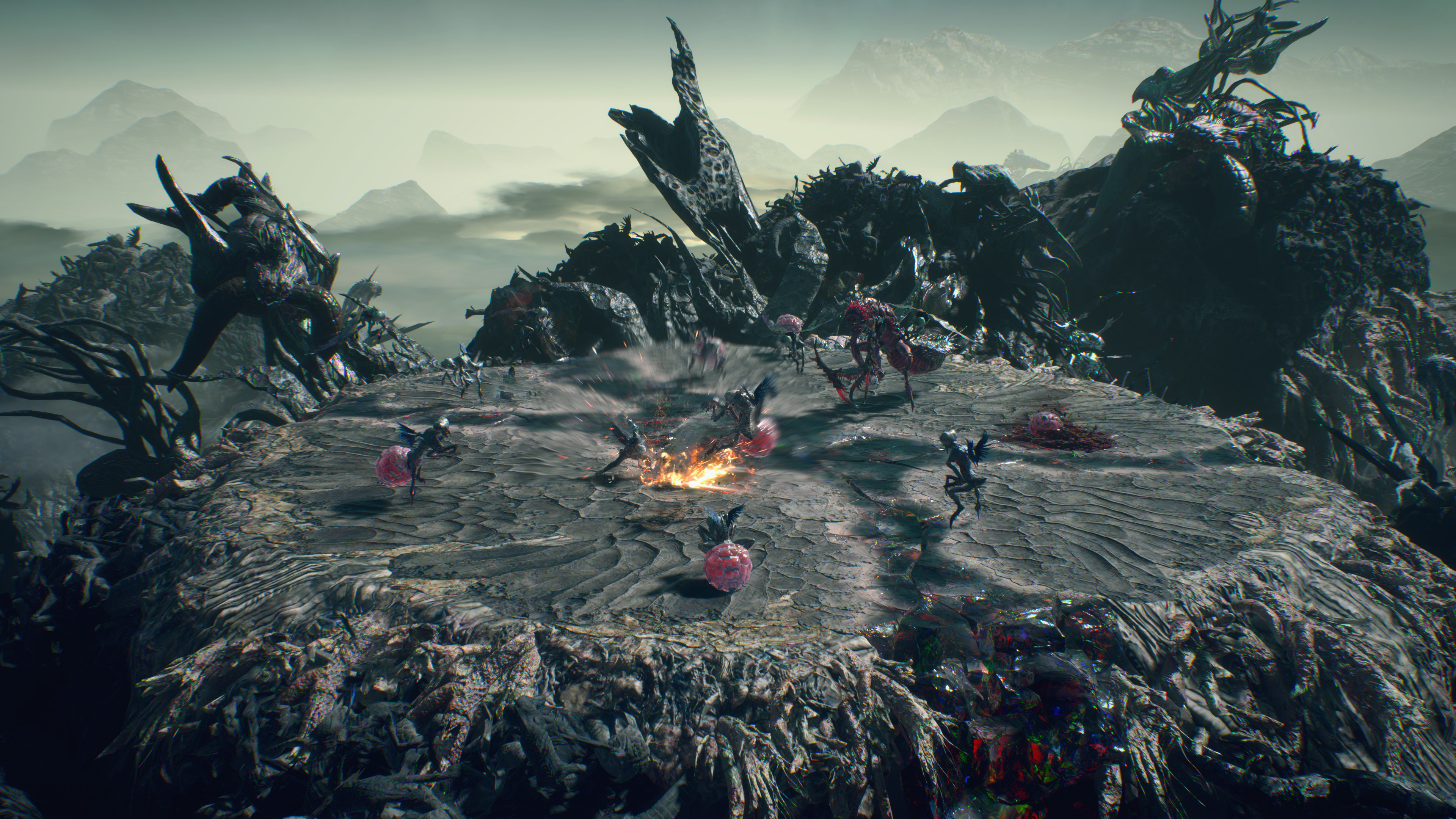 That’s right: Bloody Palace is making a return! The development team is still ironing out the details and balance adjustments, so we’re expecting to deploy this as a free update in April 2019, shortly after the game’s release. Stay tuned for more details around launch (March 8, 2019). 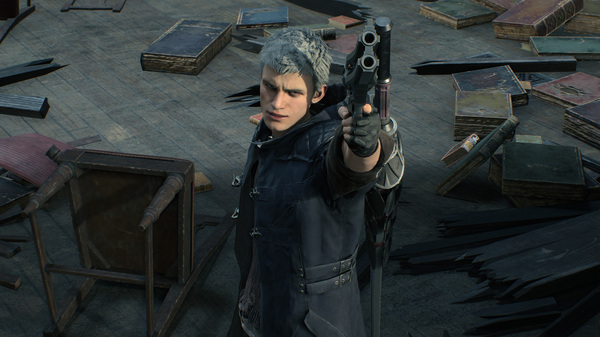 And finally, we have just announced our first Devil May Cry 5 demo, available as of December 7, exclusively on Xbox One! This will be similar to our events demo, where you play as young demon hunter Nero with his trusty Red Queen sword and Blue Rose hand cannon as well as Overture and Gerbera Devil Breakers. You’ll be able to play through nearly an entire mission, with the epic fight against Goliath waiting for you at the end. This demo will be available for download from December 7, 2018 until January 6, 2019.
Click to expand...

Lyrics said:
Savior, bloodstained, hellfire, shadow. Having a dark side.

If you have to ask,it's too late somewhere in between,you're carried to grace.
An iron fantasy,touching it.
Dark side of me not you.

Savior, bloodstained, hellfire, shadow. Having a dark side.

Devil in my blood, living on the edge. Split myself in two, turns myself around.
Summoning the power, drag myself through pain.
Blood smells of me and you.

Savior, bloodstained, hellfire, shadow. Having a dark side.

There are more previews been uploaded by various outlets, all of them showing some content from the first 10 missions of the game (including cutscenes, levels, boss fights)

Preview of the new iteration of Subhuman theme song.


Now this is listenable.

Now this a bit to technical but is something the game should adress at some point post launch.