Dirge of Cerberus fans, did you know you can watch all the 'Lost Episode' cutscenes with English subtitles in one full movie here - http://www.youtube.com/watch?v=x3d113lDd0I ?

For those who don't know, Dirge of Cerberus: Lost Episode was a mobile Japanese-only-release which told Vincent's tale as he journeyed from WRO HQ to Nibelheim during the main game.

A massive thank you to Eder Paraiso C. Flor of my FB novelisation fan page for bringing this to my attention.

I am nerd-gasming so much right now. I never thought we'd all be able to see this. But FFVIIExcavation has delivered yet again... It was uploaded a little less than two weeks ago, on Dec 31 2013.

#3
Oops, looks like S and G got there before me. Please delete my/this thread. =)

#4
This is amazing beyond words. I never thought we'd get to see this.

#5
I'll merge them. This is excellent btw, looking forward to watching it.

Lex, think this is worthy of front page?

#7
In my opinion, this is most definitely frontpage worthy. I think it should be its own article, not something meshed with the Weekly Roundups. The Lost Episode playthrough is a HUGE find, worthy of its own spotlight.

EDIT: Added a link to the playthrough in our Dirge of Cerberus content page.

#8
Yes, it should have its own article. And it should wait until after Monday because the roundup is up then and this kind of deserves the spotlight

I may not have the time to write it though.

I'm sure all of us would love to write the article, so it will definitely get done.

Who's doing the Roundup anyway?

#10
I've begun writing the newspost (and already uploaded a feature image for it) but there are a few things I'm not sure about. 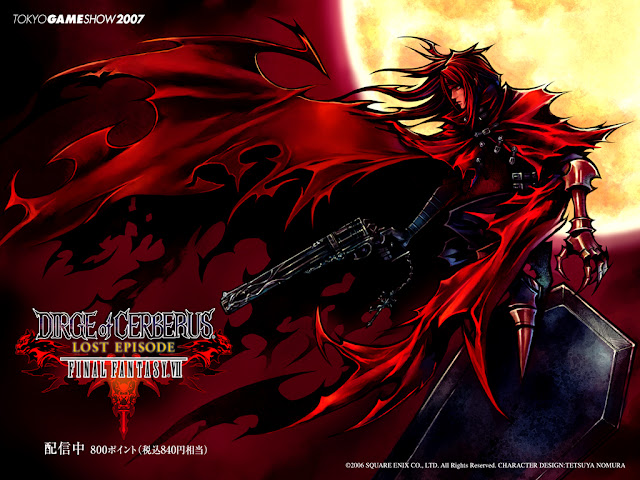 - What's the technical reason that Lost Episode became, well, lost? When did the episode cease being up for purchase and what type of cell phones did it work for?

Some of these questions may not be necessary to answer, but I want the newspost to be accurate.


Squall Leonhart said:
Who's doing the Roundup anyway?
Click to expand...
Nobody, I guess. But what's the harm in skipping the WR for one week?
Last edited: Jan 13, 2014

No harm that I can see.

I'd go ahead and do the newspost for this as soon as possible rather than wait for a roundup we may not do.

1) Yes, there was an official English version: http://www.youtube.com/watch?v=K_Nnjfgv_48

2) Looks like the pre-install version was released on November 11, 2006 with the DoCoMo P903i and P903iX HIGH-SPEED phones, while the full version was available (as an upgrade request) on November 6. It was available to download on July 25, 2007. These dates are all Japan only, though. Finding the North American information is difficult because they took the official website down and it now redirects. I do know it was available through Amp'd Mobile (which used Verizon's network) in North America, though

3) It became "lost" because the service simply went away, as with Dirge's Multiplayer Mode. I'm not sure exactly when it happened in Japan, but probably around the time smart phones took over. It doesn't help North America that Amp'd Mobile went down the tubes in July of 2007, and that's probably when it was lost over here. I don't know if Verizon continued to carry the game for a while after Amp'd failed
Last edited: Jan 13, 2014

#12
If no one is doing the roundup today then I'm happy for it to be skipped, it doesn't look like there are any drafts up on WP anyway.

Go ahead and post this whenever its finished Shad.

#13
Pretty much finished, aside from the question mark if there should be more citation sources and if the following phrasing is correct on my part:
"In North America, the service that sold the game, Amp&#8217;d Mobile, went down as early as July 2007."

Am I correct in understanding that it was the online shop that went down and not that some online service was required to play the game at all, even if it had been installed on your phone?

That's how I understand it. A lot of new app games these days do require a data connection to play, but I think Lost Episode came out just before all that sort of thing since that's a smart phone data plan matter.

#15
Newspost published. Other frontpage authors can go ahead and edit the post to correct grammar (or write a more pleasing title, whatever you feel like), include more links etc.


Now...MY REACTIONS TO THE EPISODE. I had already read the game script, the summary and seen the images on FFVIIExcavation. But actually seeing the game was a very different experience.

If Dirge of Cerberus, the PS2 game, is gloriously mediocre as a whole, this mobile phone chapter is gloriously bad. It has that sort of "Superman 64"-bad feel to it. The annoying sound of Vincent's shoes gives you a headache in a way that's actually fascinating. They were able to squeeze in voice files with good quality, but they couldn't get Vincent's shoes right to be easy on the ear? Could be that the method of recording (it appears to be a very well-done filming of the phone) destroys the sound, but I'd still wager that Vincent's shoes here make a headache-inducing sound.

The tutorial is so needlessly lengthy. Having Reeve as the tutorial-man is a hilarious contrast to himself from the PS2 game, where he rarely broke the fourth wall in this way.

Very uninspired gameplay, with barriers appearing at random spots with no rhyme or reason, even moreso than in the PS2 title. Interesting difference from the full game is that there are now these "Beast Spots" that transform Vincent, instead of a "Limit Breaker" item.

The Deepground soldiers... By the gods. For such a short game they sure managed to make the soldiers a helluva lot more talkative than in the full game. Soldiers are just standing there, holding conversations with the innocent citizens they are about to kill. It's like Deepground forgot that they were coldblooded killers! There were a few odd, similar moments in the PS2 game, but the mobile chapter takes it to a whole other level.

Rosso's "exit" animation makes me gawk. She just jumps straight up in the air. Not jumping forward, not backward, just...flies off. It's such a lazy animation that I can't help but laugh.

Then we have the researcher...who looks almost exactly...like Lucrecia Crescent. When I first read the game script on FFVIIExcavation, I thought they went for something a bit more subtle with this researcher. BUT NOPE! To a 95% degree, she IS Lucrecia. There is absolutely nothing subtle here when using her as a ploy to remind Vincent of Lucrecia.

Speaking of our favorite crazy lady... The PS2 game already did a well enough (unintentional) job at showing how insane she is. Her guilt over the death of Vincent's father kept her from embracing Vincent, yet she still invited him to a picnic and acted slightly flirty. The mobile phone episode however, yet again, takes things to a whole new level. She asks Vincent to dance with her, thanking him for saving her from her own obsession with scientific research and acts VERY flirty this time around. This scene made Lucrecia approximately...five times crazier than she is in the main game.

Dirge of Cerberus: Lost Episode. A game so bad that it actually gets a bit fun, despite the high headache-inducing factor.

Great article. Great review too. Should have included that in the article. =P

I actually facepalmed when I saw the researcher. And again during Lucrecia's shenanigans.

As much as it clearly sucks, you have to give Lost Episode one thing: It perfectly captured the most groan-inducing elements of the main title.

#17
Didn't include the review because it was quickly and shoddily written, but I've compensated now by pointing readers to the forum thread and the review within. =)

You can discuss the emergence of this FFVII Compilation treasure on our forum! <---Follow this link and scroll all the way down to find Shademp's review of Lost Episode!
Click to expand...
I forgot to mention one very important verdict though... Lost Episode achieves NOTHING in the narrative. It doesn't add anything to the main plot, aside from repeating a few points and themes already seen well enough in the PS2 game.

Beginning of Lost Episode:
"I need to get to Shinra Manor!"

End of Lost Episode:
"I still need to get to Shinra Manor!"

Haha. I just love it.

Hey now, it makes Lucrecia's behavior even more misleading for Vinny and further cements that she really didn't know what the fuck she wanted. =P

that one Lucrecia fangirl

Mo why the fuck did you not bring this to my attention immediately. *cries* I just found out about it NOW, through DEVIANT ART. DEVIANT ART, MO.