#27
Oh, I guess I can post this too. It's my initial attempt at taking all my books out of my storage cabinet:

It's just big ol' pile there, but it's my collection at a glance. I'll be adding my game and soundtrack collection (both equally voluminous) in there and do it up right in the next few hours.

I've had all day for the scope of this to sink in and it still hasn't.

Calling it now: next TLS Awards, you're getting nominated for something like "Most Impressive FF Collection" or something.

Prince Lex said:
Where do you live. Tell me, and I promise I won't come and rob everything you own

Click to expand...
i promise nothing of the sort even in jest

i'm taking every last item and there is no stopping it

Haha, Alex said "fucking." Let that be a mark of just how impressive you have been.

#32
That's just the tip of the iceberg! The prettiest tip, I'll admit, since Ultimanias are beautiful books, but it's only like, 10% of the whole thing. Next up, my "general FF (but mostly Amano)" art books! 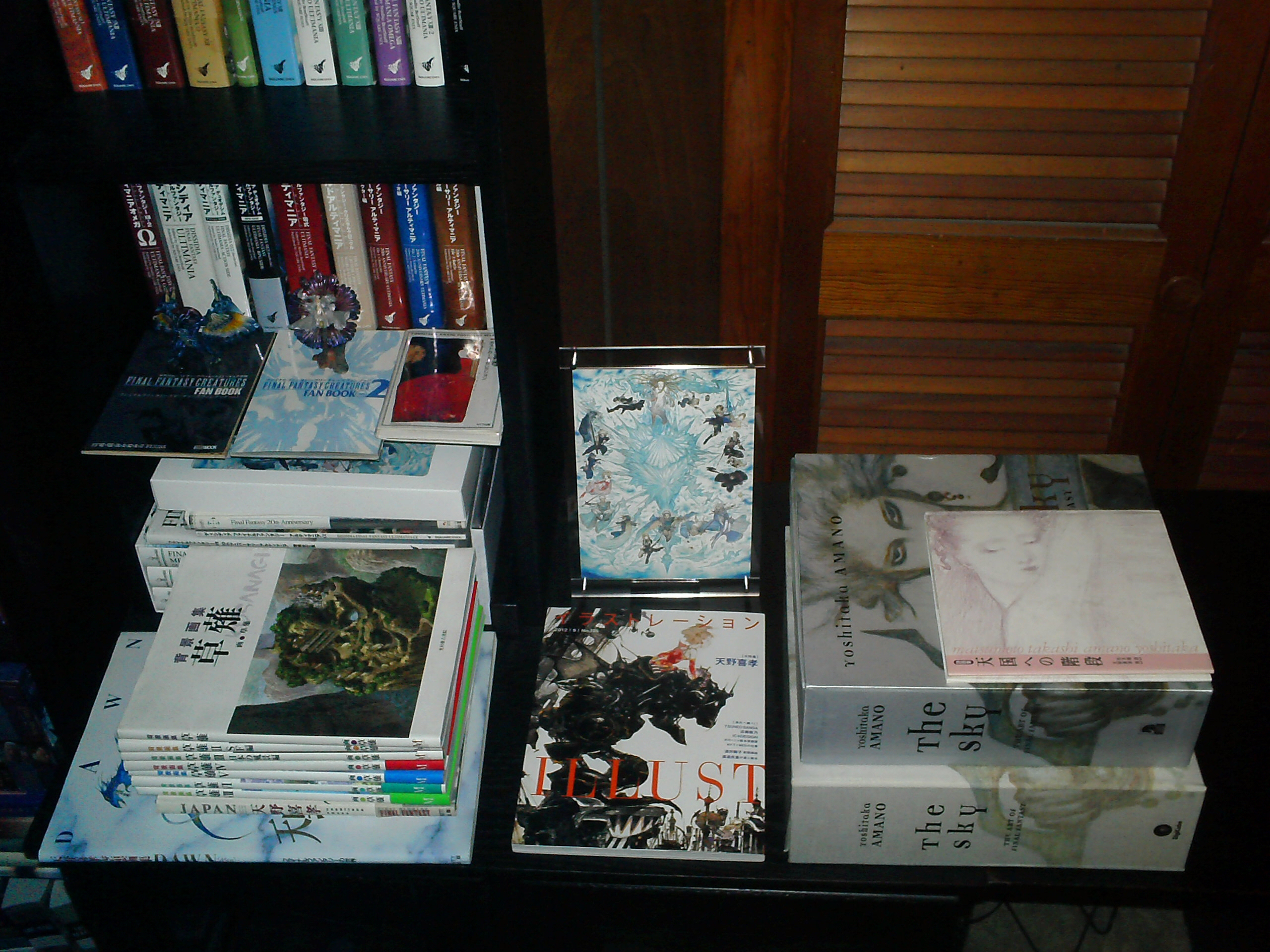 Here we have, from left-bottom to right-top:

And that's that! I have other artbooks but they are FF-specific, so I'll get to them when I get to the game itself. As you can tell, I absolutely LOVE Amano, and made it a point early in my collection to get everything he's ever done for the series. And I have! I've also scanned it all (and uploaded it to the FFwiki), and you can see THAT here:

I haven't actually updated it yet with my newest, newest Amano FF stuff, like the newly released FFXI Adoulin jobs art and the couple new scans I was able to get from the 25th Anni stuff, but it's damn comprehensive otherwise.

#34
Now onto the actual games! First, the original Final Fantasy and Final Fantasy II! Lots of stuff here, so two images of the spread - one the left side the other the right side. 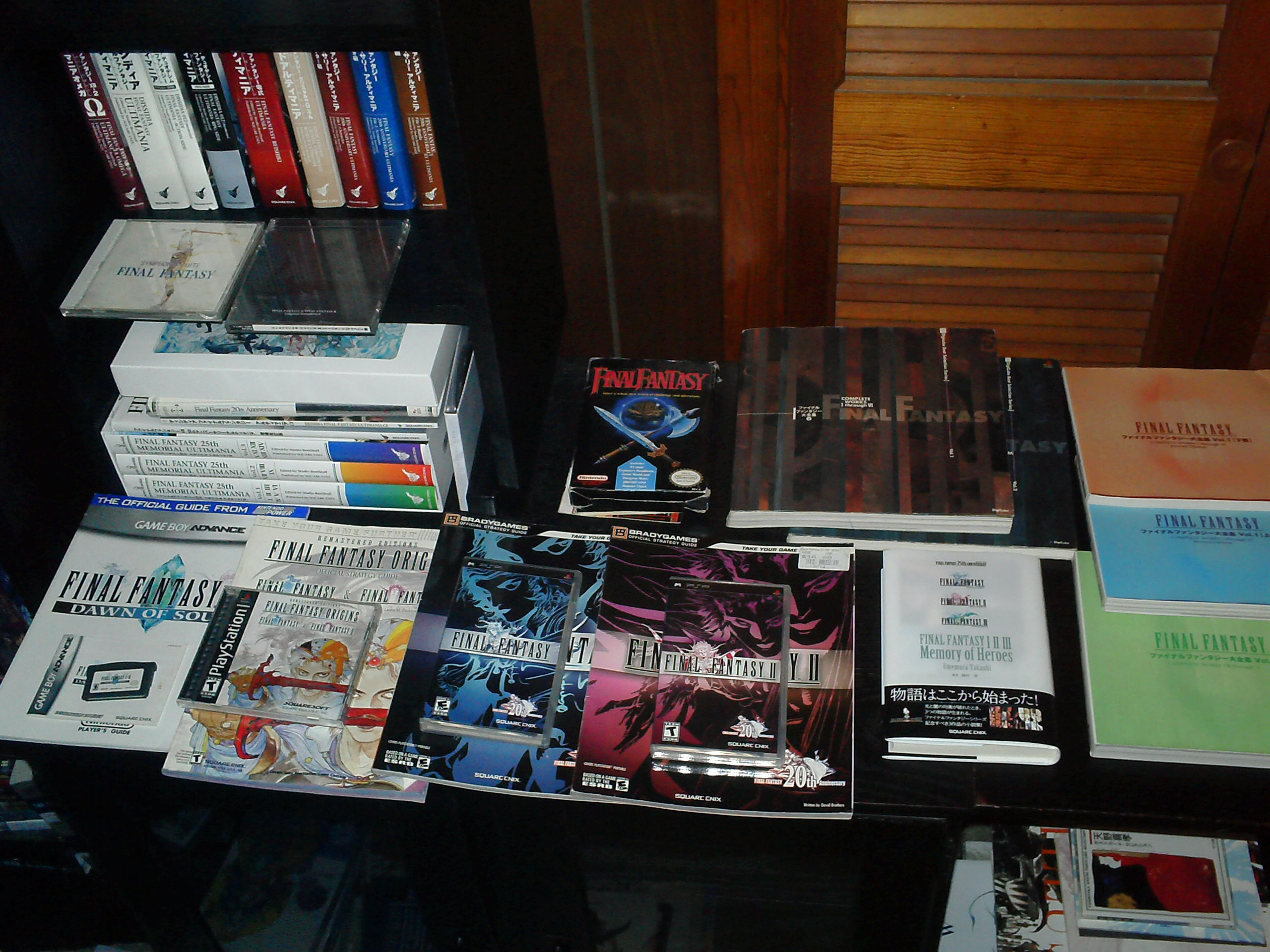 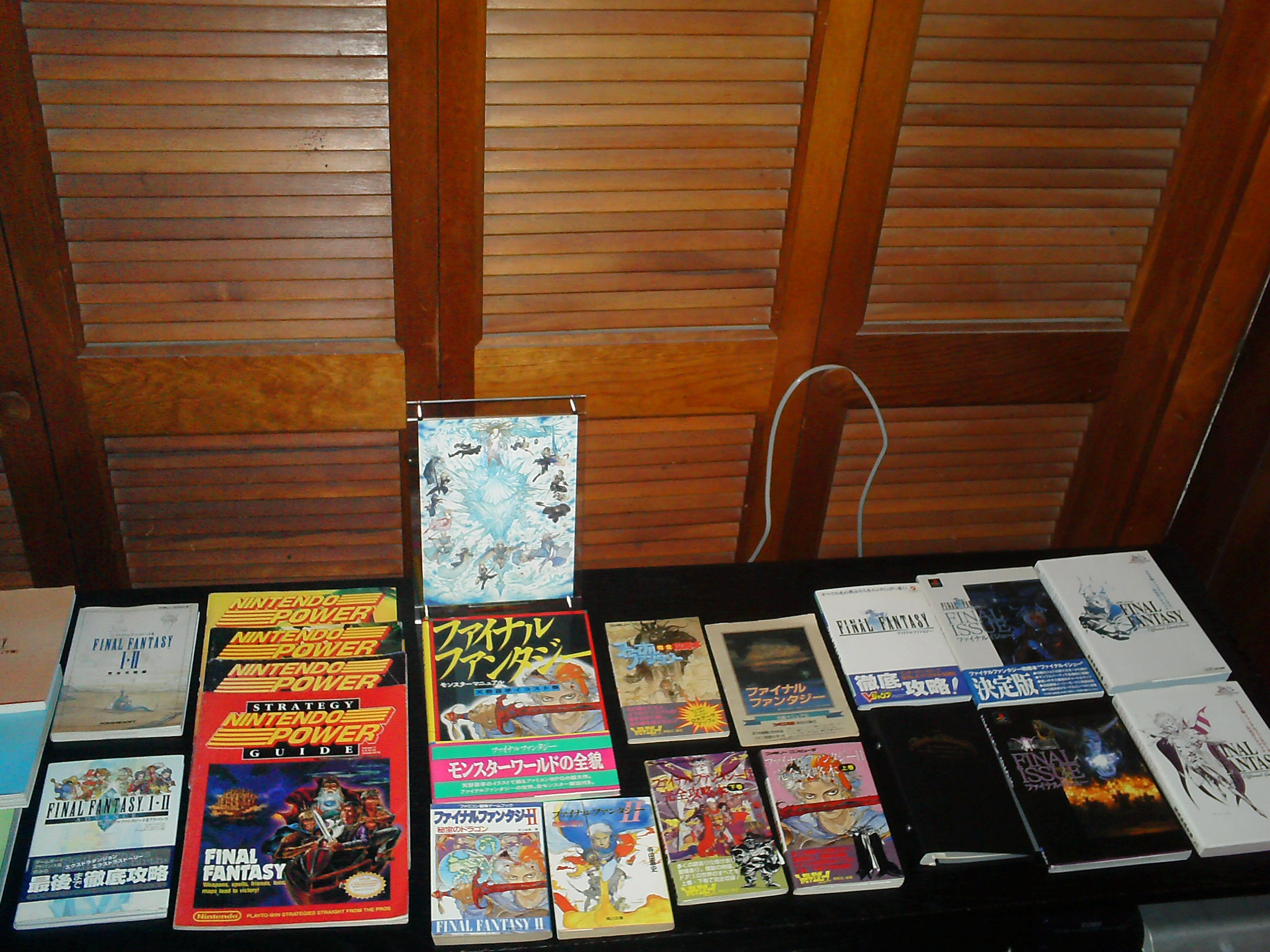 Lotsa goodies, starting from the far left of the left image:

Below that, and working my way across:

On the right, working my way to the right end:

I also have the Virtual Console version of FFI NES, and digital copies of the soundtracks for the NES versions of FFI and FFII, as well as mp3's for the five battle songs added to the PSP edition of FFI (for the FFIII-VI bonus bosses). And a fanslated emulation of FFII NES, of course.

Holy shit, your collection for just I and II might be bigger than my collection for the entire series. There's some stuff in here I've never even heard of.

i think we get it now

edit; aaaaaaah what the ffii novel

(Also in the event that you...."get in a really bad accident" or "mysteriously disappear off the face of earth leaving behind your earthly possessions" or feel the "magical compulsion to give away all of your FF stuff", do you think you could leave all of your FF stuff to me? :cute: )
Last edited: Jan 17, 2013

#38
Onward and upward! Next is FFIII and FFIV. Again, two images for the spread. Left is all FFIII, right is all FFIV. 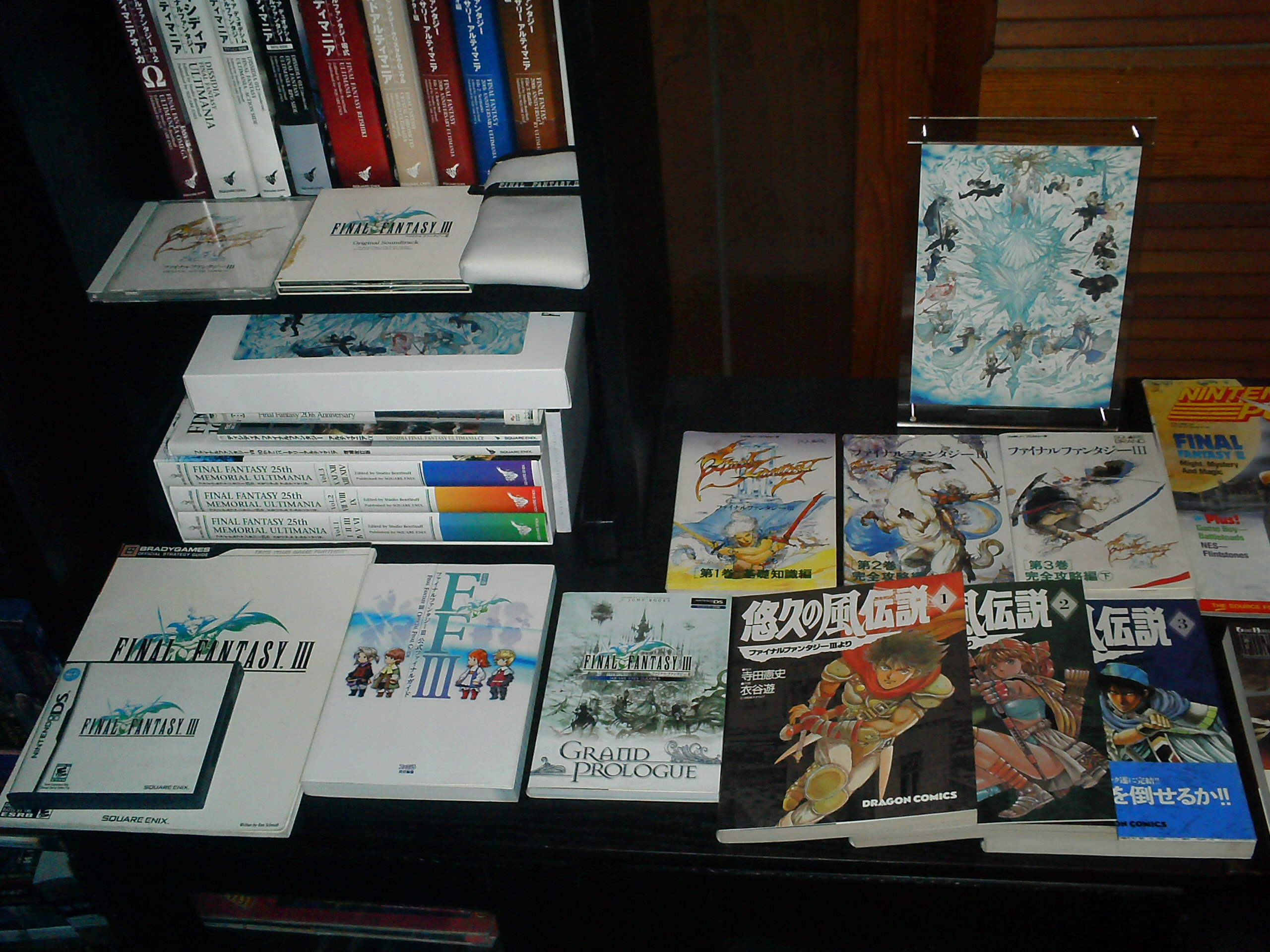 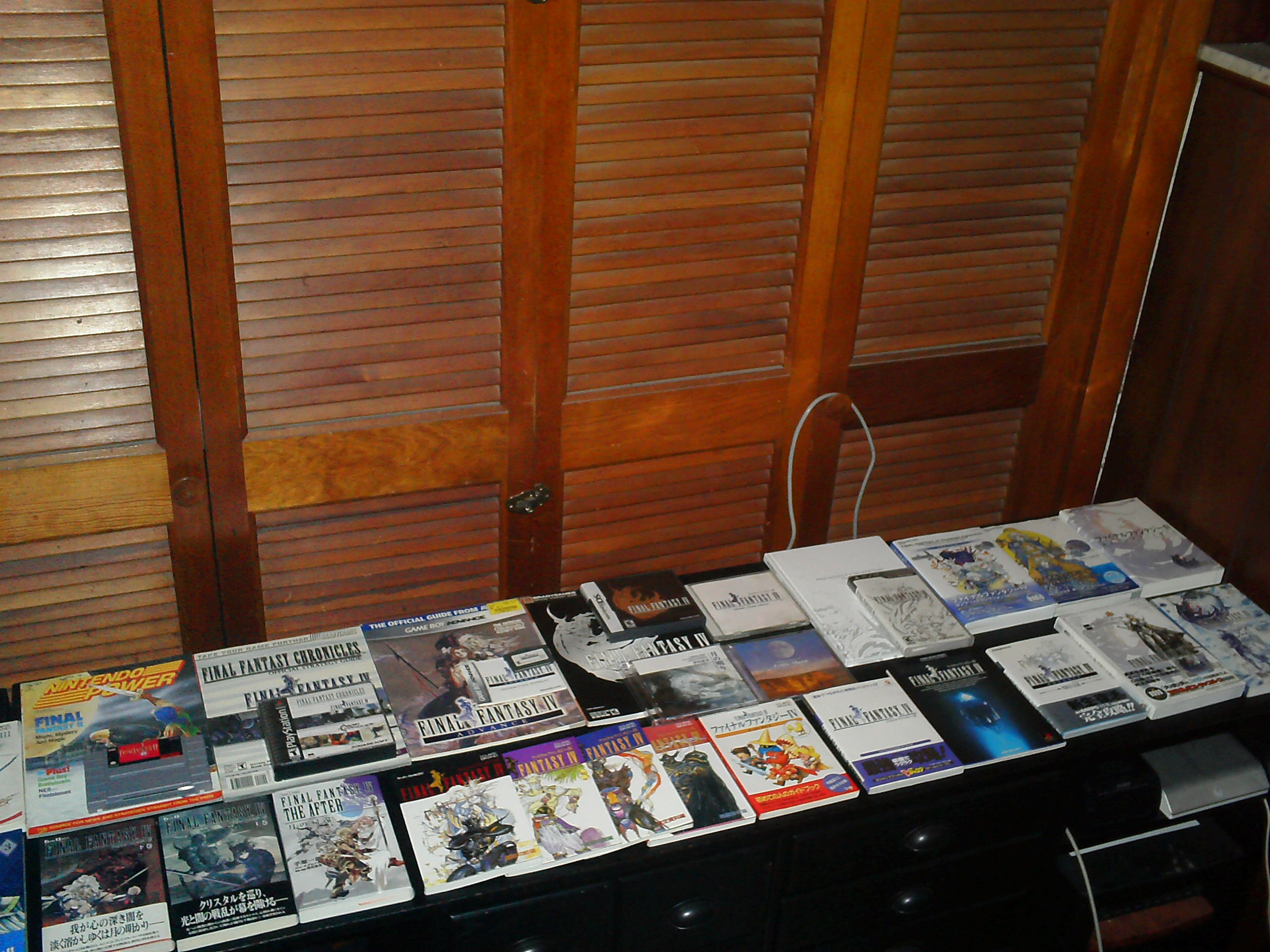 Okay, here we go! From far left of left image:

In the left image, from the left:

In the right image, from the left, top row:

Also, I have the Virtual Console version of FFII (IV) SNES, and a fanslated emulation of FFIII NES. Music-wise, I have digital copies of:

FFIII: Legend of the Eternal Wind (sort of a audiomusical retelling of the game with orchestrated FFIII music in the background)
FFIV Mininum album (just a few unreleased tracks from the SNES version)
Final Fantasy IV Piano Collections
FFIV and The After Years Sounds Plus (Mysterious Girl Battle FTW!)

And that's about it for that. FFV and VI next!

EDIT: And believe it or not, I would never have won the Super Fan contest. The guy that did win is leaps and bounds beyond me, collection wise. My collection is primarily one of utility. I collect data, info, music, art, games. I don't have hardly any memorabilia like toys and keychains and coffee mugs and T-shirts (oh shit! I do have a couple t-shirts for FF1. I'll put them in the next image), etc. The guy that won had mountains of mint condition, unopened swag of every kind; usually multiple copies of the same thing, every copy from every region for every game, etc, etc. I don't have or want all that crap I can't even use. Although I am quite convinced I'm the bigger fan, since my stuff has been opened and enjoyed, and every game you see there has a 100% mastered file sitting on it. Plus, I'm writing an ongoing 400,000 word FFVI fanfiction! I bet he doesn't have one of those! Anyways....back to work!
Last edited: Jan 17, 2013

Strangelove said:
i think we get it now

I'm over here.
Click to expand...
i'm not seeing your ungodly collection of everything i ever wanted

#42
Aaaand, FFV and FFVI! I think this will be it for the night. I've got class all-day tomorrow, and it's already 1am. 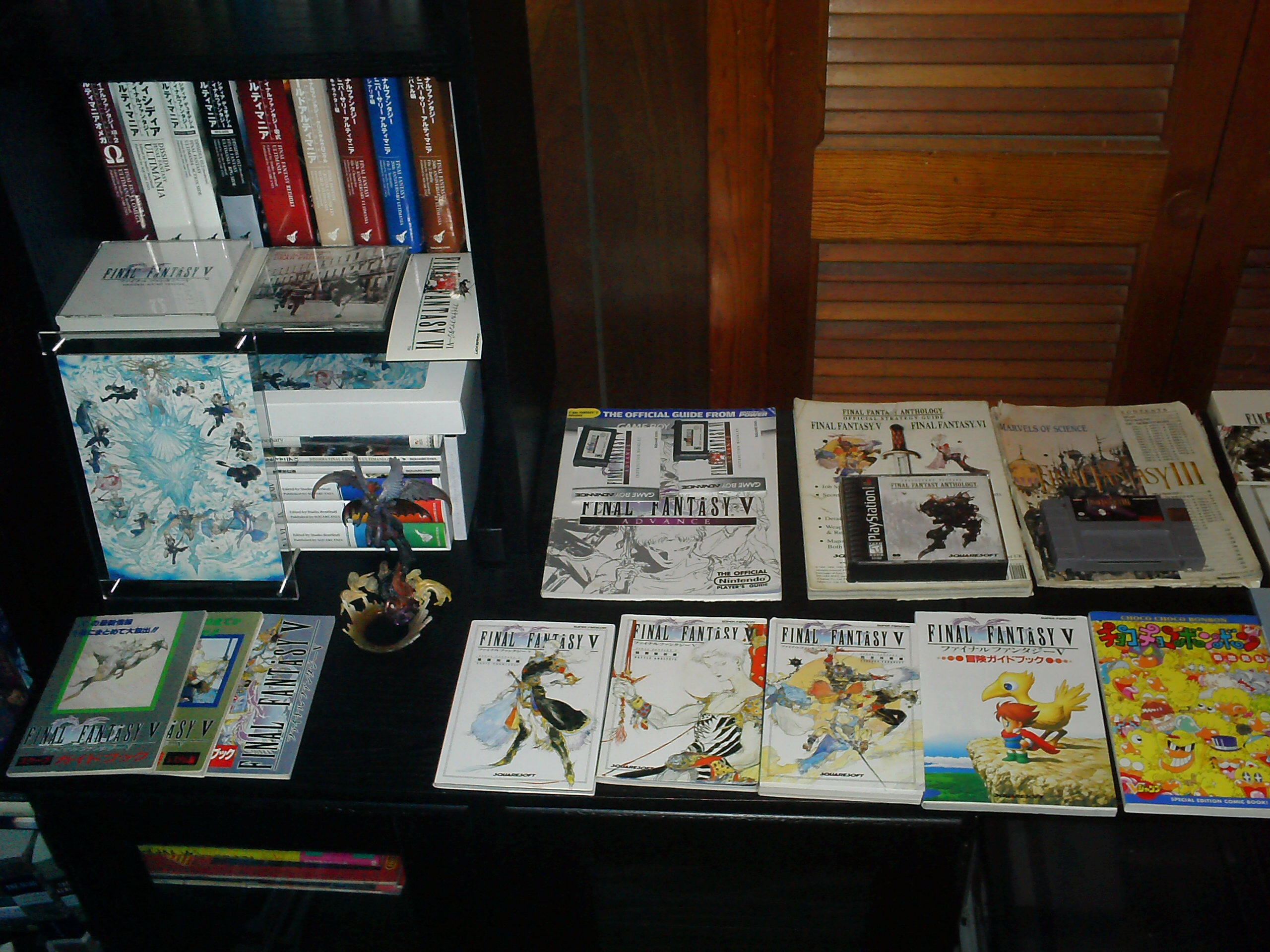 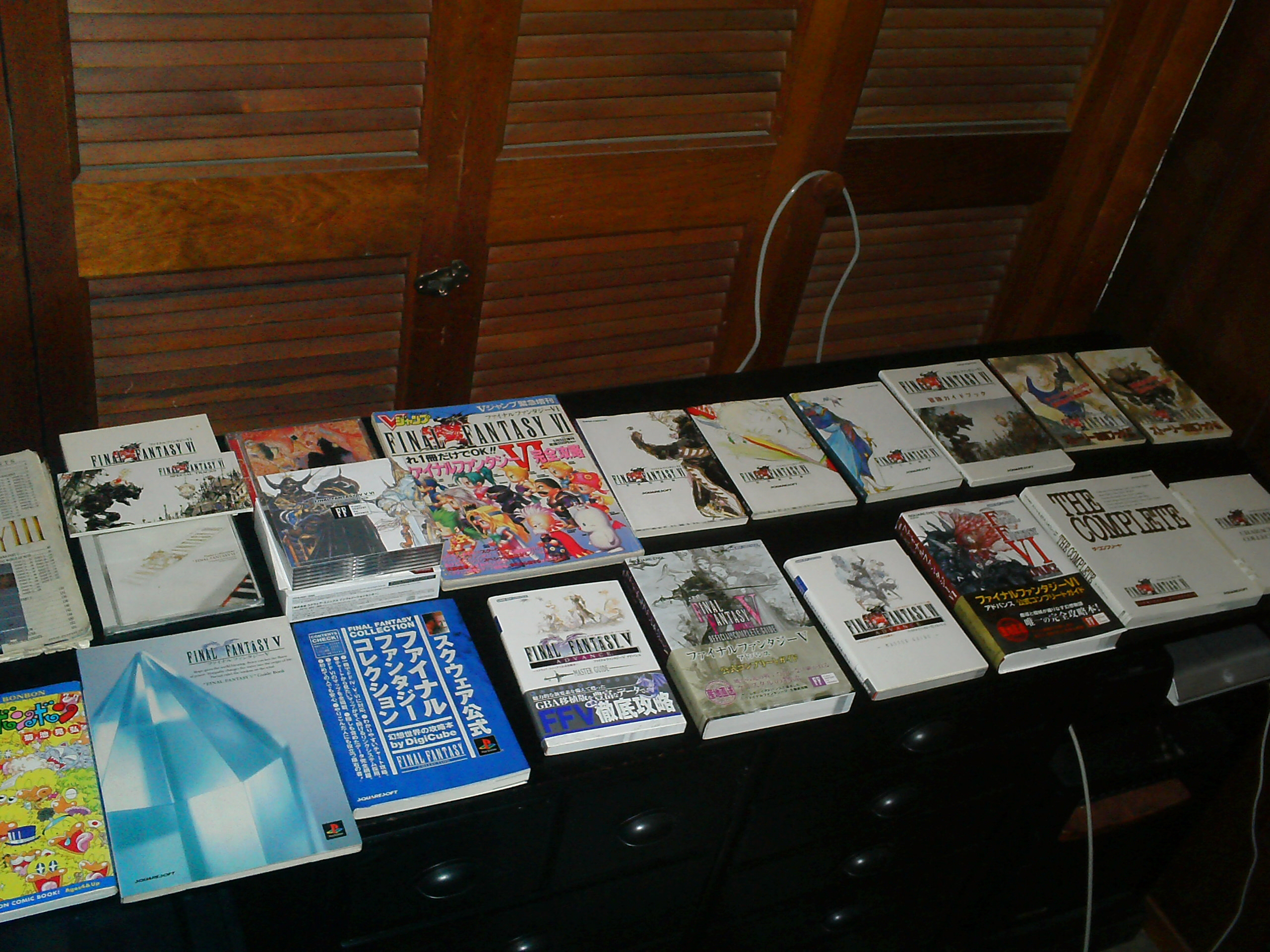 Okay, once again from the left side of the left image:

And of course, I have the Virtual Console version of FFIII (VI) for the SNES, and the fanslated emulation of FFV for the SNES.

And I have digital copies of FFV Mambo de Chocobo and FFV Piano Collections.

And that'll be all for tonight. Now you may be thinking "What about Mystic Quest? FFV Legend of the Crystals? The various arranged general Nintendo-era albums I didn't show? All that stuff I'll group togther with my miscellaneous FF pile at the end. Next, FFVII and FFVIII! Tomorrow.

Really can't wait to see what you might have for VII and VIII.

For a second, I thought I had scans of something you don't have, but upon a second look, I see that you do have it (that book you've labeled "FFVI official materials guide 2," with Terra on the cover).

#44
Heh, yeah, I know they have longer Japanese names, like FFIV's Settei Shiryou...but I'm lazy and just named them by a generic "what it is" name. Anyways, bed time!

this there actually a book you don't know

#46
I have now decided being me is ultimately unrewarding. I think I shall be espritduo now so I can have all the beautiful things in my possession.

#47
Alright, back to the grind! The whole FFVII Compilation ended up being enough by itself, so FFVIII will be with FFIX. 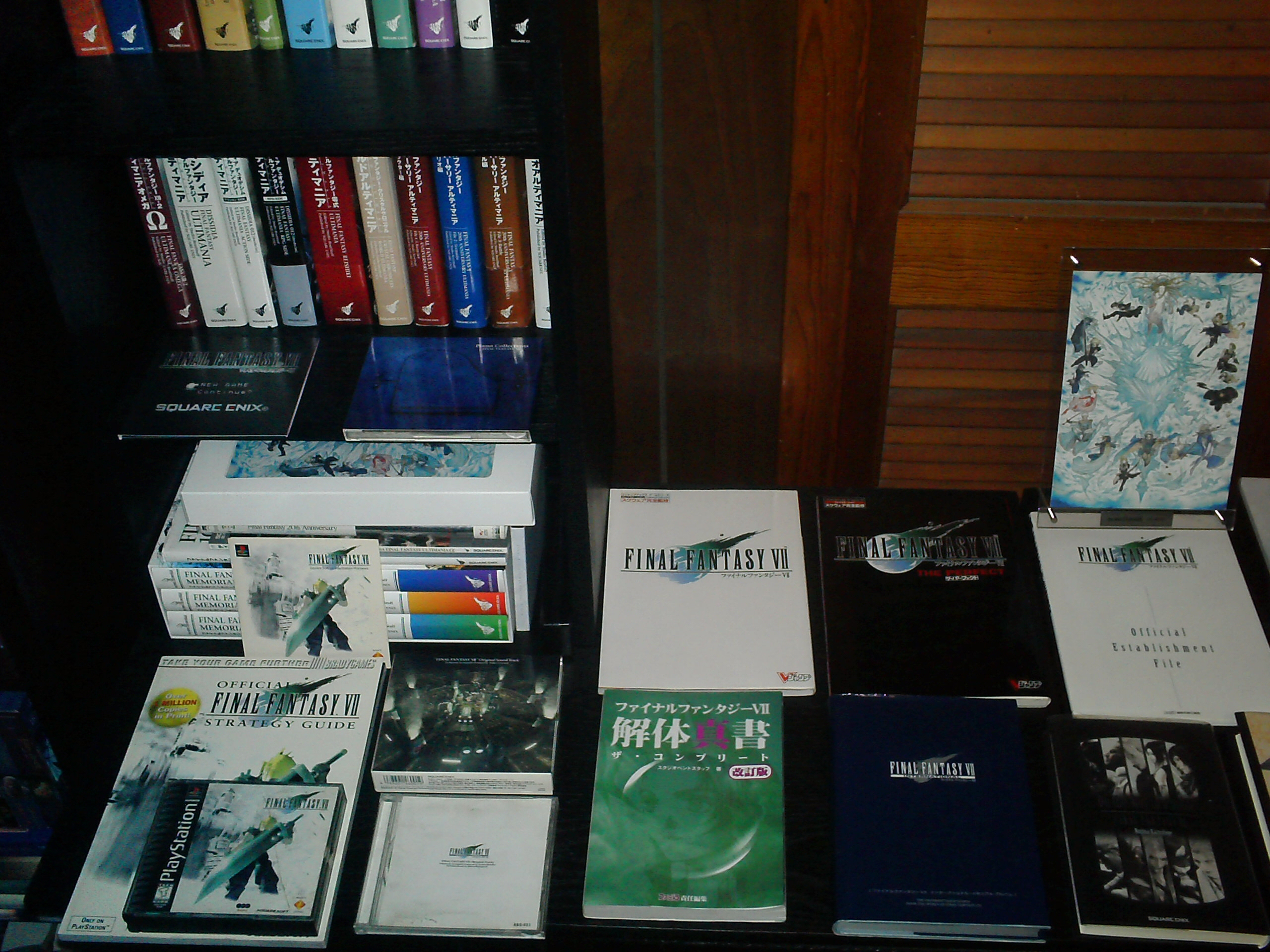 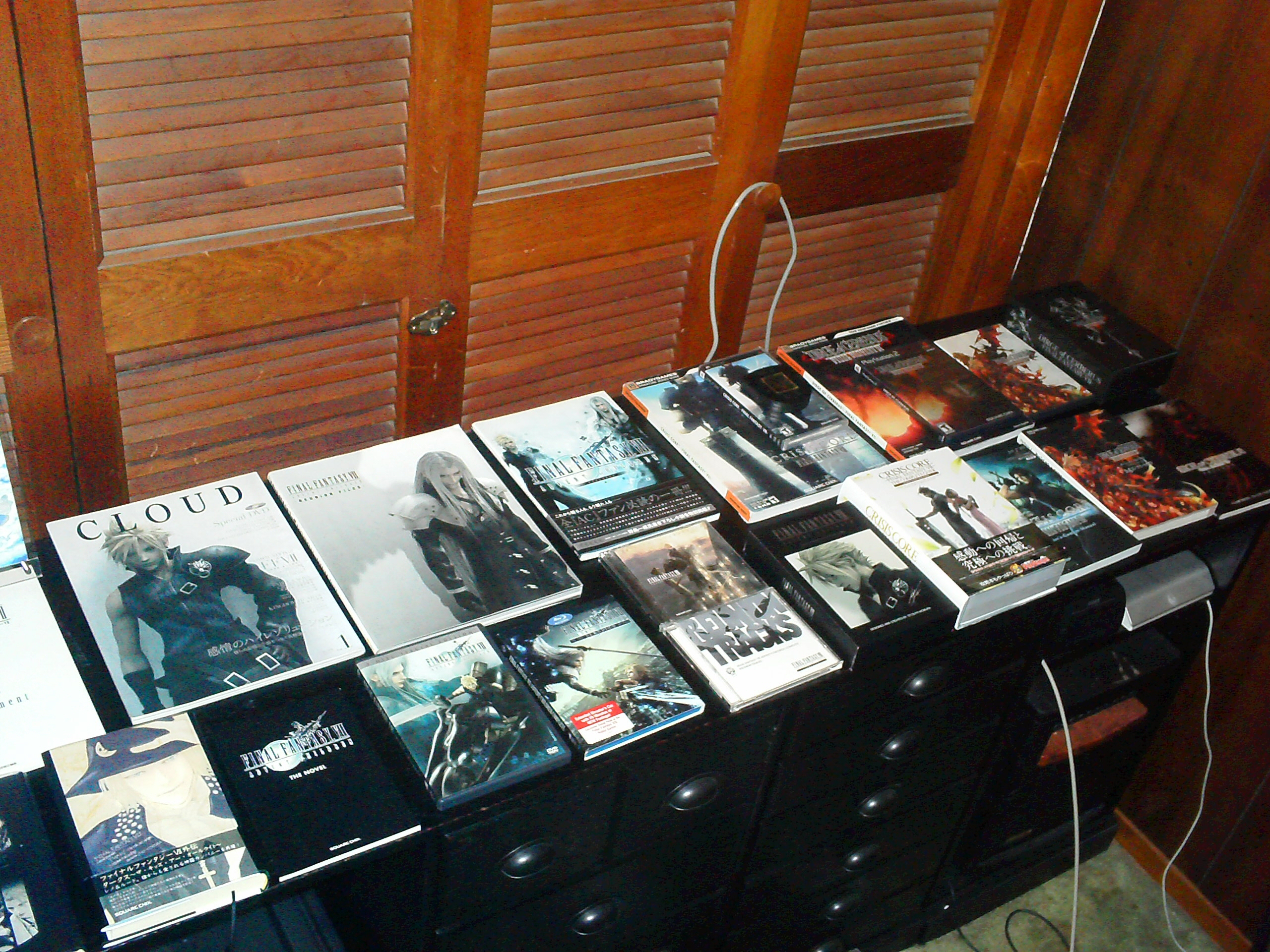 Okay, left image, from the left:

Also, I have FFVII on the PSN, and digital copies of the FFVII Unreleased Tracks and International Extra Disc, Before Crisis and Last Order soundtracks, and I do have the Crisis Core OST...but I have no idea where it is! >_< I have the songs ripped to my computer, though.

And that's everything for FFVII! I have one more magazine coming in the mail shortly - a V-Jump special world preview issue, like the FFVI one. There are apparently one of these for each FF from VI-X, XII, and XIII, and getting all of these is where my collecting path is currently treading. I have the FFVI one, as well as the FFIX, X, and XII ones. The VII and VIII ones are on the way to my house as I type this, and the XIII one is the last on the list. There is incredbile artwork in these, which can't be found in any other book, even the Ultimanias and 25th Anniversary Ultimanias. Crazy stuff. I'll add them to a future shot if they come in the next day or so.

Stuff I simply do not have, but really wish I did: Before Crisis, Dirge of Cerberus -Lost Episodes-, FFVII Snowboard mobile game, and a real life Buster Sword.

FFVIII and FFIX up next, but don't get your hopes up. The pickings are pretty slim for both of these. There just isn't much out there for these. The intimidation of the first Ultimania might be to blame for FFVIII (it really was a whole new level of strategy guide), and Playonline I bet is the culprit for the dearth of FFIX guide books.

I must say I feel a little better about my collection seeing that I have most of the same stuff for VII.

The CC Complete Guide was published by Media Works. How much did you pay for it, by the way? It's gotten hella expensive. Wish I had gotten it a long time ago.

Very curious about this unique artwork for VII and VIII in the magazines you have coming.

Alright, from the left:

I do not have FFVIII PC or a Pocketstation, believe it or not! I thought I had the FFVIII demo, but I can't seem to find it. Those demos I never much paid attention to way back wehn, and it's by luck alone I still have the FFVII demo. Nor do I have either the old or new PC version of FFVII. Shameful, I know, but I'm not much of a PC gamer. The Pocketstation is a horrible oversight though. I had assumed for many years that you couldn't use a Japanese Pocketstation with the NTSC FFVIII or PSX, so I never bothered getting one...but I recently heard that you can actually use it with those?! So that's newly added to my list of things to track down.

And that's it for FFVIII and IX. Like I said, not much here, sadly. The FFVIII World Preview V-Jump issue is coming, and I know for a fact it does actually have tons of good, one-of-a-kind concept art in it, so I'm pretty excited.

Anyways, X and X-2 next! FFXI is a world unto itself, and is definitely going to need its own deskspace. Maybe I'll throw FFXIV with it, since there sure ain't much for that red-headed stepchild.
Last edited: Jan 18, 2013