Strangelove said:
looneymoon said:
Wait, wasn't there a scene in 13 where someone starts crying over some shit in a past life they don't recall exactly?
Click to expand...
i thought that was in kingdom hearts
Click to expand...
omfg... I was thinking of KH2 sorry

which XIII character was that??
C

Alyssa was in XIII-2, and she was a walking paradox of sorts, which is why her memory was fuzzy.


Noel had the same issue.
C

#1,855
I'm aware of that, but she's the closest we have in the 13 world to someone breaking down over hazy memories of a past/alternate life.

That Noel one was glossed over within the story.

on part 9 (?) now and not sure what to feel about lightning. the whole plot of her being an ex soldier immediately sparked "cloud" in my mind but that and her almost cold aura is all i can compare her to him (disc one cloud guys, calm down). she's mostly annoying but what i have seen in her is that she has a soft spot for children and almost immediately attempted to protect vanille by telling her not to wander off. and letting hope come with her (she's even given him her exclusive nickname) and training him shows that as well.

what i think about the characters so far (i already said my say about lightning):

sahz
he reminds me a bit of usopp. not because of their exterior but their personalities. i'm beginning to like him but am waiting for his badass moment soon.

hope
i have no loved ones passed on (especially from such a horrific way) but i still can find myself to understand completely on his feelings of wanting to fight and blaming snow. in fact he may be my favorite character. i think i would get along with him IRL.

vanille
she's not annoying actually. she seems to have more to her than what appears to be. she doesn't know a lot about the history that surrounds her which doesn't make her a ditz (to me) but makes me think of where she's come from to not fully understand her surroundings. i usually hate the overly girly type characters but it fits her okay and she's not that girly.

snow
this involves a bit of lightning. i understand her anger of her blaming him for serah because i can put myself in her shoes since i have siblings and two sisters of my own (one who nearly matches the name of her little sister). because of that i'm trying to go out my way to understand snow's shoes because i like going outside of my thinking comfort zone. there isn't a lot to understand about him since he left the crew early on, and i don't want to connect him to serah. even though he loves her he is still his own person, i just don't see it yet.

serah
she's even lesser known since she "dies" in the beginning of the story. i have a wary feeling i will come to find her annoying. this is because i hated her for hiding her being a l'cie from her own sister and running of with the solution (or problem, whatever) with her lover. snow can love her all he wants, he's not her sister and no-one knows you better than family (when done right). her first thought shouldn't even have involved snow but lightning.

speaking of l'cie i'm around 30% on understanding what they are, same with purge. how does one even get branded in the first place? by infection? by getting kidnapped? are certain people chosen to be of the purge (poor people) or is it just random people? i'll have to see more to find out.
Last edited: Jun 22, 2018

All the questions you have at the moment will be answered, including why Serah felt closer to Snow than Lightning.

The only questions that I have that STILL aren't answered:

---The heck happened to Fenrir?
---The heck did Yggdrasil even COME from? (I assume a certain being made it).

okay, i am really liking the characters so far. everyone is extremely flawed, but not just for the sake of them being relatable!!!111 but because they are all doing what they think/believe is right in trying times.

snow
now there's more to his character. he wants to move forward but internally he's wracked with guilt and doesn't know how to forgive himself.

light
she tried to protect her sibling and in turn pushed her away. boy, as i know how that feels. she's also had a much better taking to hope and opening up more (to him at least). she's realized her previous plan was useless and is coming up with a new, revised edition.

vanille
she's basically the same except for her secret of sahz' son. same with sazh and his announcement of his son. their stories have yet to get more attention so far.

so she's the woman people keep shipping with vanille??? that's freaking disgusting....fang looks like a grown woman and vanille is like 16 at best.
seems a nice enough character. has her own guilt problems but got them out with light (i think.)

hope
officially my favorite character. not even halfway through the game he learns maturity, forgiveness and friendship. he's honest and working hard for his own strength and independence. he's grown a lot and i'm very excited to see what he has in the future.

also, should my next post be in the spoilers thread, since i will be talking more of the story? just trying to make sure.

I thought that FFXIII had some very strong characterization for the main cast. I wish it had spent more time with some of the villains, with Rosch and Jihl especially wanting more screentime, but I have no real problems with the core story of XIII. Everyone gives the datalogue so much crap for its presentation, but it's all optional stuff that adds lore, but doesn't really matter in the end.

^I'm looking forward to your impressions of XIII-2 T@ctic .

Personally, I love XIII-2. Unequivocally. Great music, great characters, great villain, good story, and they fixed all of the glaring problems with XIII's gameplay. One of my favorites in the series.

13 is said to be notoriously bad but it's not much of anything to complain about to me so far. from how it's going, i don't think a second story would be necessary, but of course i don't have all the pieces to the puzzle yet, Blade.

although, i can't help but think back on my opinions on this game is the same situation with me and crisis core. it is (or was) rather popular for FF7 fans to groan and cry over any compilation additions, and imo crisis core faced that the worst. within three years of its release fans still rejected it and labeled it as bad writing, but i could never understand because it was (and is) simply perfect for me. but nowadays it's not only seen as one of the best compilation additions but a perfect standalone PSP game in general. i think that may be the case with 13.

...or maybe it's really just a bad game and i haven't seen all of it yet to judge

so she's the woman people keep shipping with vanille??? that's freaking disgusting....fang looks like a grown woman and vanille is like 16 at best.
Click to expand...
Fang is 21. Vanille is 19.

T@ctic said:
also, should my next post be in the spoilers thread, since i will be talking more of the story? just trying to make sure.
Click to expand...
It's up to you.

The Ultimanias say both are 21. Is there something that identifies Fang as 23?

My mistake, can't seem to find anywhere I picked up the notion now.

The Twilight Mexican said:
Vanille is 19.
Click to expand...
Seriously!?

The Twilight Mexican said:
Fang is 21. Vanille is 19.
Click to expand...
wow i would have never guessed that, for both. fang looks 25 at least, not in her very early 20s. oh well, i stand corrected.

It's up to you.
Click to expand...
well, i want to be safe and not come across any spoilers in the other thread, so i'll put my responses here, if no-one minds.

The XIII trillogy will become backward compatible with XBOX ONE on November 13.
https://www.gameinformer.com/xo18/2...-to-xbox-one-backward-compatibility-next-week

Snapped this for XIII's 10 anniversary 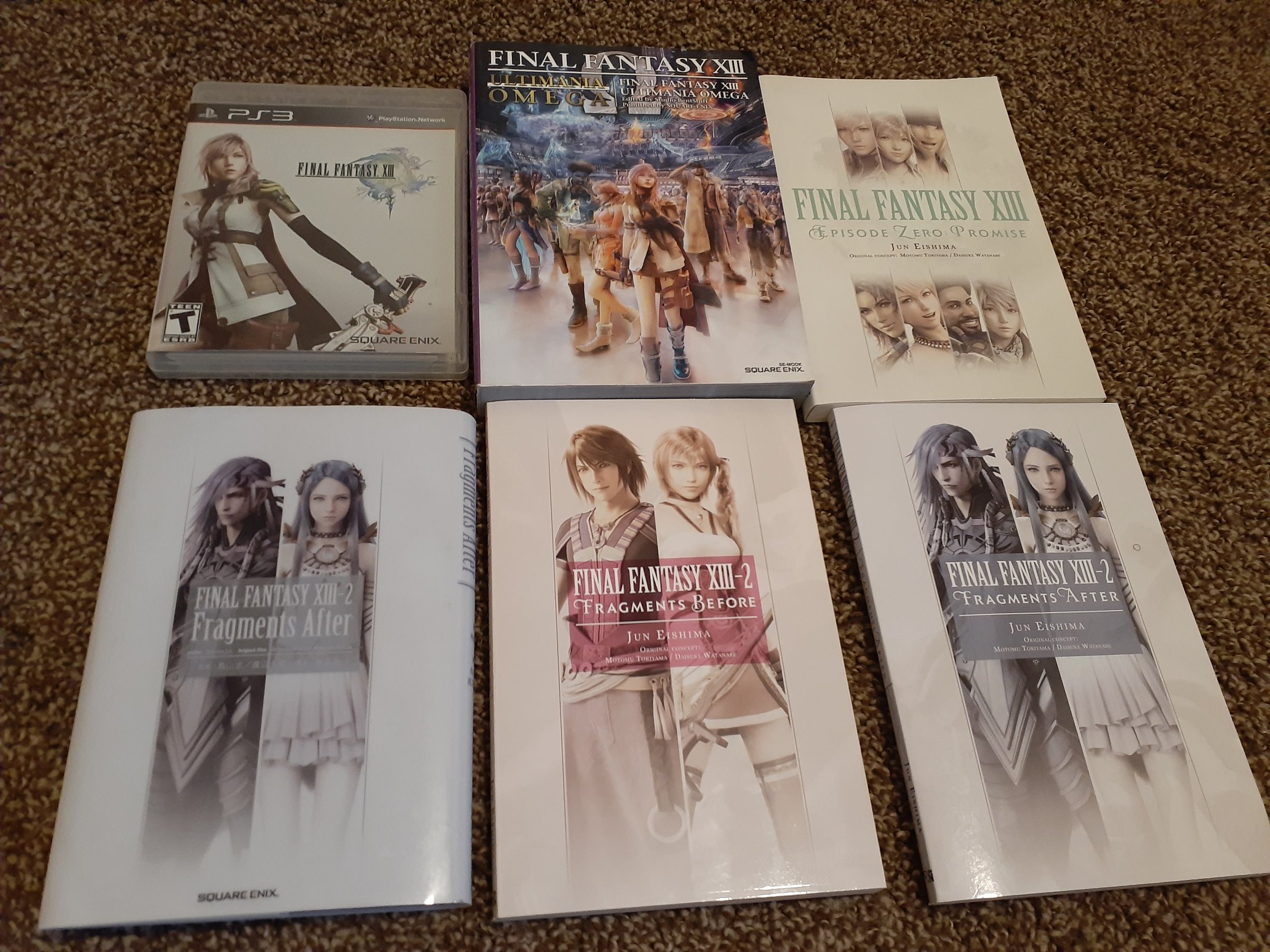 mother of god
Click to expand...
Yep, we got old.