Not sure what to think of it.

Quite excited to see how this goes, and how it looks like it's gradually developing the idea that the legend that became the story of Sleeping Beauty came about as a result of slow changes in the retelling of a larger story about her over time. Overall, I just can't get enough of the way that this movie & Angeline Jolie portray fairy folk as interested in humans, but also somewhat aloof and superior in the tone that they take. Along with Jonathan Strange & Mr. Norell it's one of my favourite portrayals of those beings in this type of fantasy.

Quite interested in seeing how this looks once we get more than just a teaser.

Very, VERY pleased with the direction that this one's going in, especially given the first film.

Huh. Not bad. Could make for a nice popcorn evening. At least there's no baggage for me with this one.

I very much like how it plays off of the way that the faerie folk feel a sense of ownership and attachment to the beings around them. There are a lot of really fundamental ways of how the faerie folk and humans have struggles when it comes to compatibility even in general interactions, but more specifically in deals with humans. It's that particular dichotomy that I think that the first film really nailed, and I'm glad that that's what they're building upon in this film. 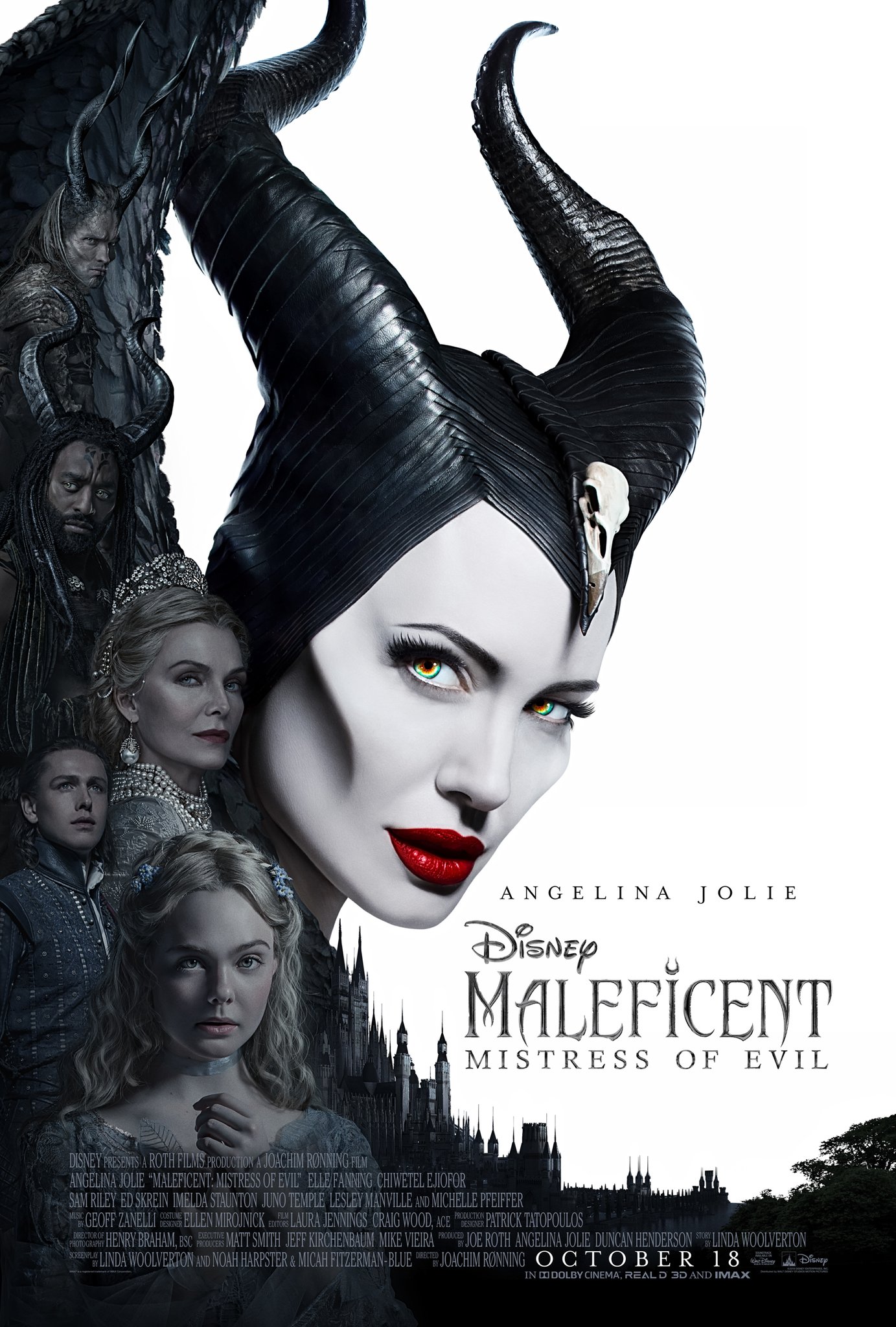 I'm really interested to find out if they're introducing the Seelie and Unseelie Courts of Faerie as a way of expanding the mythology of the Moors, and allowing Maleficent to be in a different moral grey area – since very often the Fey in fairy tales seem exceptionally sinister but they really just have values that feel almost alien in comparison to those of humans (one of my favourite things that this film really nails). Tolkien says something about them in one of his books that I really like:

“Supernatural is a dangerous and difficult word in any of its senses, looser or stricter. But to fairies it can hardly be applied, unless super is taken merely as a superlative prefix. For it is man who is, in contrast to fairies, supernatural; whereas they are natural, far more natural than he.”

I haven't notice this until I saw this poster, for some reason they gave her a bird skull as a forehead ornament?

You can see it when she's meeting with the other royalty, it's a part of the rest of her ensemble:

I wish more of the newer Disney LA could be like this:


Excited to watch it asap.

Just came back from watching Mistress of Evil, and yup, Maleficent is still the most interesting and weird of Disney's live-action remakes and I'm glad the sequel keeps up with that spirit.

The sequel is solid but the story doesn't quite have the same "wow, where did that come from?!" shocker & flavor from the first movie, that's not to say it lacks interesting new ideas because it brings quite a bunch of them (particularly on the second act where some more cynical eyes would call blantant cinematic universe set up of material), they just don't have same level of gravitas and focus of the first movie. And I think this is probably the most contentious thing about Mistress of Evil, is it good that the movie has many new ideas going for but not quite deeply developed or would it have been better having less stuff but more developed? Where I stand, stumble by over-ambtion generally preferable to success by the books.

There's a large focus on the supporting cast this time around and I think many will likely be satisfied with that, and even when Maleficent is absent for long stretches of time she manages make her screentime impactful and all is thanks to Jolie's delightful performance, she's a bae goth queen.

This one won't convert into believers people that weren't sold with the previous film but most fans of the first will have a good time.

If they make more of this and have the same spirit I will go and watch them with lot of enthusiasm.

though I wish they did more with it...

As someone who LOVED the first film, I greatly enjoyed this one as well. It isn't as tight or emotional as the first one, but it pulls in the context of the original animation in the way that I had figured it would, and I was nothing but pleased. We also get hints at a differentiation between Seelie and Unseelie Fey, even if it isn't explored in great depths it was nice to have those sorts of mythologies nodded at. Also, hooray for Diaval getting an excellent D&D moment:


He gets turned into a friggin' Owlbear which was amazing, and Phoenix Maleficent > Dragon Maleficent for sure. I like that these films have always been about manipulations and betrayals by those who're close to you, and I think that they're just friggin' excellent. I wish that the secondary characters like the Hedgehog Fey got a little bit more introduction where we get to see their personalities. There were some sacrifices during the big battle that felt like they should have had more focus, but overall I just loved it, and I love Maleficent as the force of Fey nature's rebirth.

Thinking about it, would MoE be the first Disney movie featuring (albeit in a very PG depiction) genocide

I think that The Lion King deals with slightly similar concepts, and other films' bigotry is typically focused around a single so-called monstrous individual that the people turn against like in Beauty & the Beast, rather than going against a larger collection of outside "others" – so I think that technically it might be, though I'm not familiar with a wide range of Disney films, so they may have covered something else similar.