Global Cooldown Skills all share the same 2.5 sec CD and cannot be used while that Global Cooldown is counting down to zero. These are usually the skills that form the main part of a three button combo (for most classes) and you pretty much want to be using these all the time. Meele and Ranged Physical have GCDs that have no cast time; that is, they can move around and use the skills whenever. Magic classes have a cast time on these skills where they need to stand still for some time before the skill actually goes off. Usually skill cast time and the Global Cooldown have the same length, so this just means mages have to think a bit more about where they stand in fights and also where they can use the next set of skills optimally.

Off-Global Cooldown Skills have a whole bunch of different cooldowns that range from five seconds to five minutes, however, they do not share cooldowns with each other or the Global Cooldown. This means that while the Global Cooldown is counting down to zero, you can use oGCDs in that narrow 2.5 sec window of time. Skills like Dragoon's Jumps are designed like this as are most of the various short-term buffs different classes have. This adds another complexity to classes as not only do classes want the GCD skills to always be used, but they also want to fit in as many oGCD skills into a fight too. And because of the longer cooldowns on oGCD skills, they can't fit in as many uses. oGCD skills also don't interact with the GCD combo system in any way.

Generally, it's best to start out with trying to alternate one GCD skill with an oGCD skill so long as you have oGCD skills you should use. Most classes start out in ARR and HW with much fewer oGCDs than they'll get in StB and ShB, so it's good to get dowm the timing of how those work now. Most people think the ARR classes are super boring because there's not a lot to do with them... IE: they have very, very little oGCDs and a lot of people think the oGCDs are what make classes feel faster paced and more interesting. And set the different classes apart from each other.
Last edited: Sunday at 6:14 PM

I just reached Idyllshire. I guess this is HW's version of Mor Dhona then. Look at all that fancy new gear that I don't have the tomestones for...

Tetsujin said:
I just reached Idyllshire. I guess this is HW's version of Mor Dhona then. Look at all that fancy new gear that I don't have the tomestones for...

That was a thing? I knew it was for Mor Dhona. Makes me sad I missed that stuff. It's weird when they talk about how this is a small settlement in the wilderness that needs support and rebuilding but when you get there now it's already shiny and fortified and bustling.

#231
Yeah, here's a big video you can skip around in if you wanna see (the first minute and a half captures the change pretty well):

#233
I say "iddle-shy-er" because I'm a filthy American, but I imagine the British way would be most like the first one you wrote

#234
Aye-dyll-shire is how I say it (the first part is just "Idyllic", the second is the shire from LOTR)

Lex said:
Aye-dyll-shire is how I say it (the first part is just "Idyllic", the second is the shire from LOTR)

Or iddily-diddily-shire if I'm feeling comical (Joe came up with that one years ago while we were playing and I hear it in my head whenever I have to go there)
Click to expand...

So uh. I'm on the lvl 60 MSQ "Heavensward". Seems like it's 3.0 final showdown time? Anyone wanna do this with me tomorrow night mayhap?

#237
I'm in. Have off tomorrow too, so time difference is no object

So first up, I did the Rising anniversary event quest a while back. It wasn't anything special but it did reveal the true identity of that wandering minstrel... 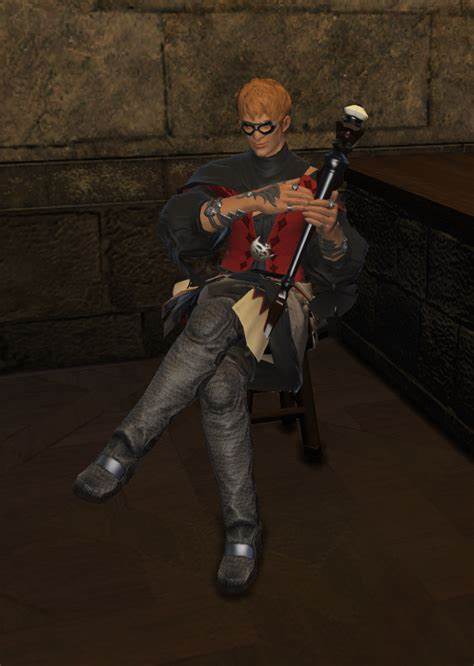 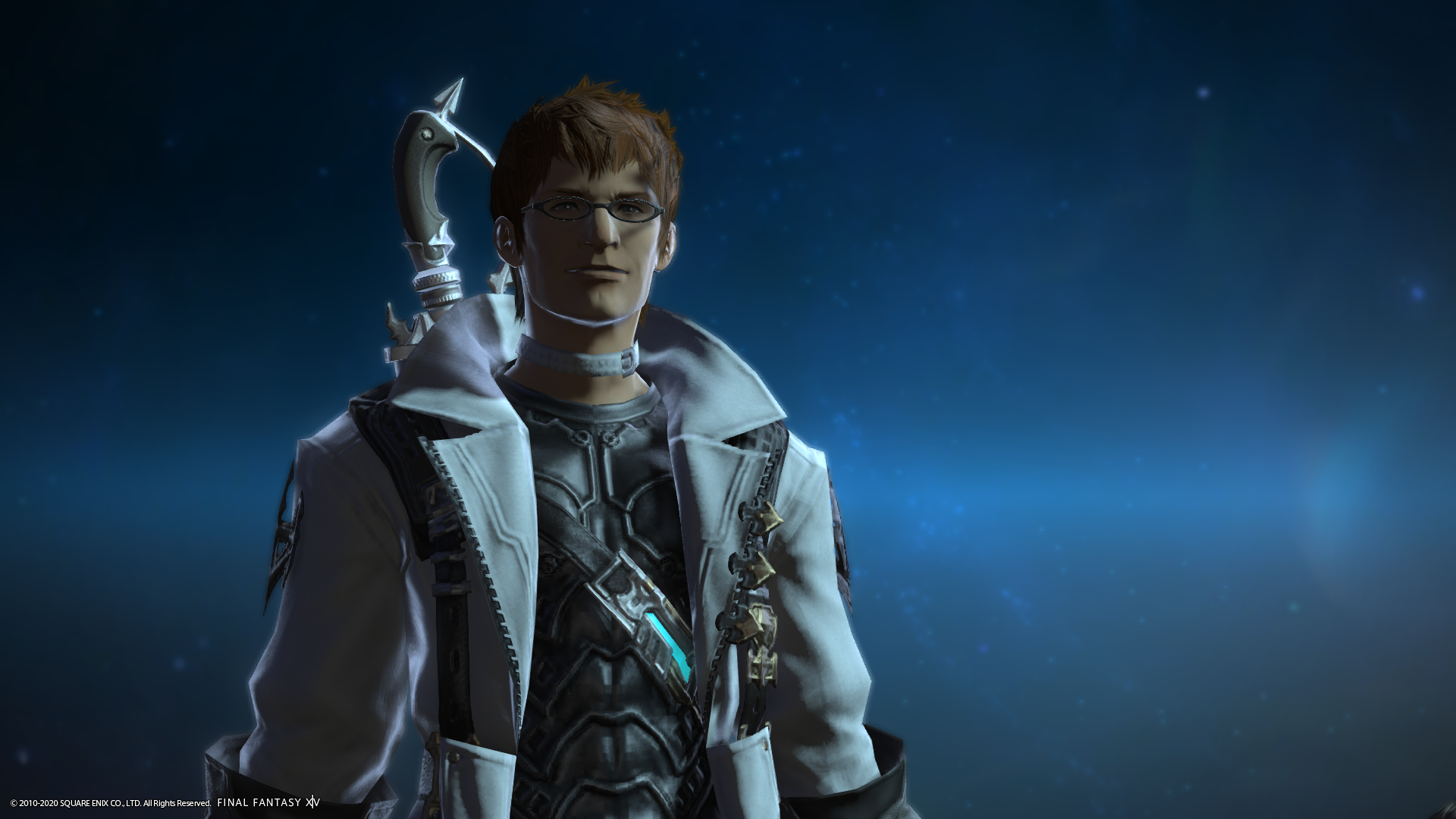 I knew it. I knew he reminded me of a certain legendary Japanese video game producer and director.

I gotta say, it's an honor to finally meet you, the one and only... 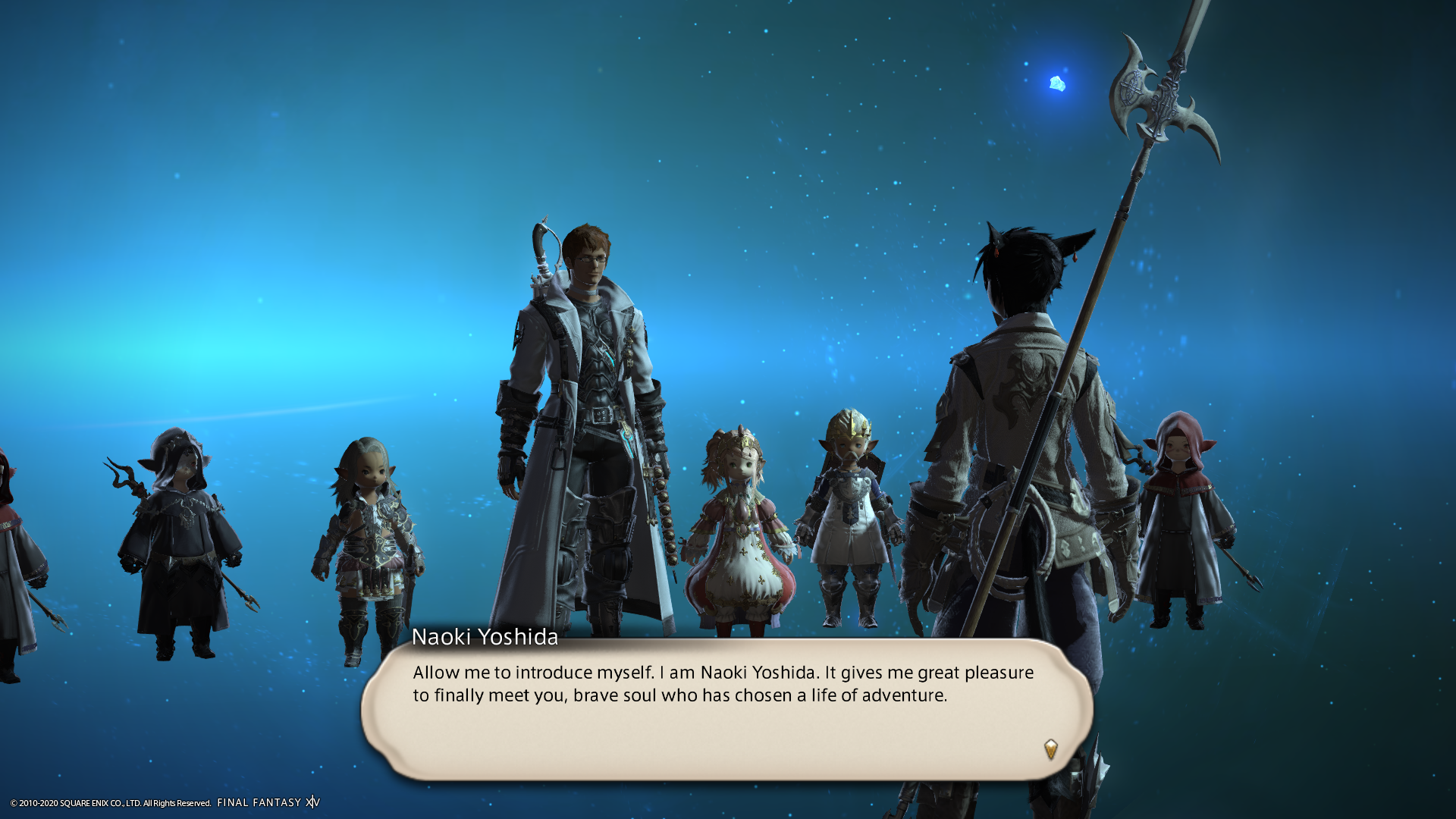 ...so uh, do you know Kojima though? Can you introduce me to him? 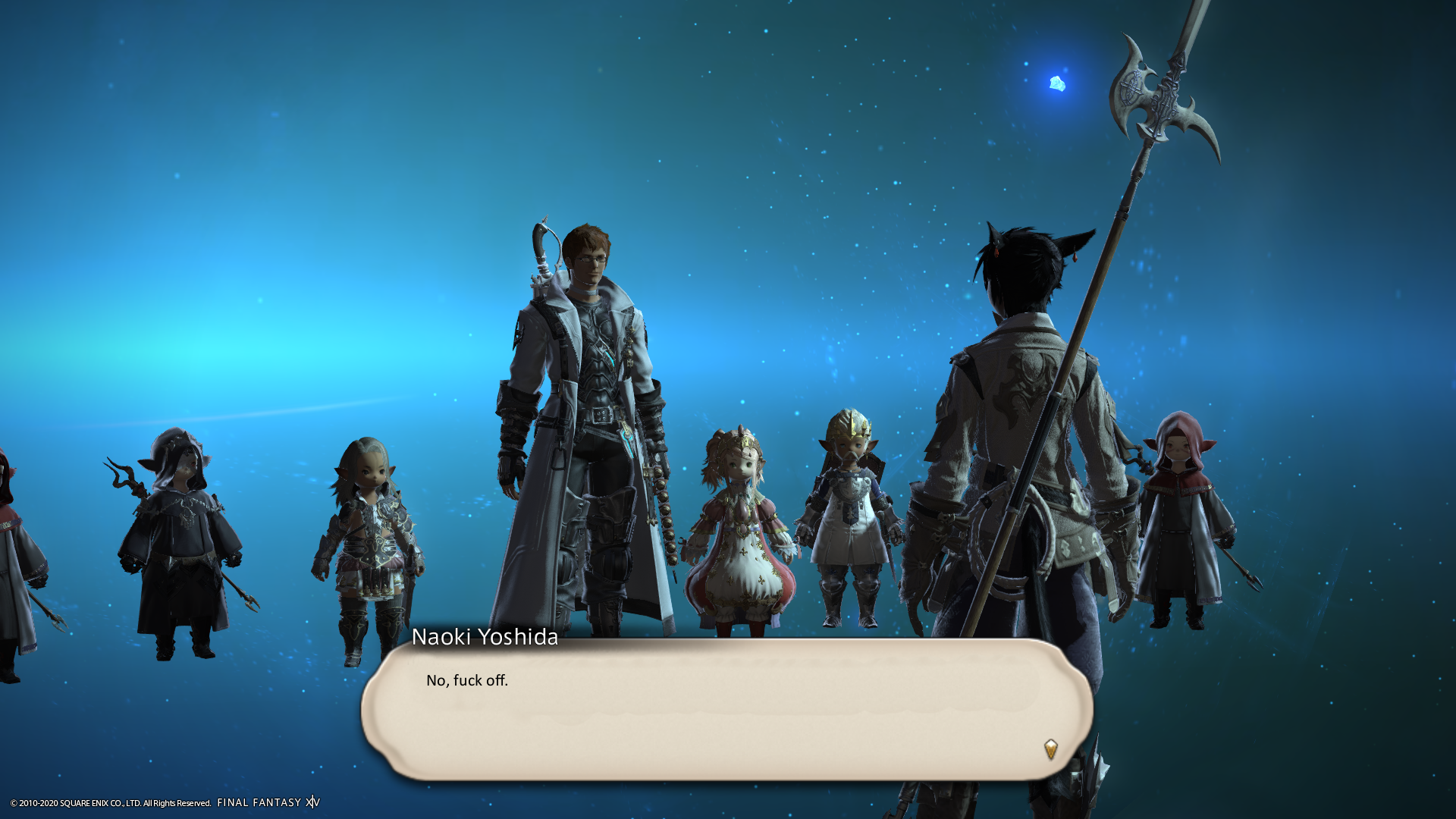 For a while there I went with a new look. 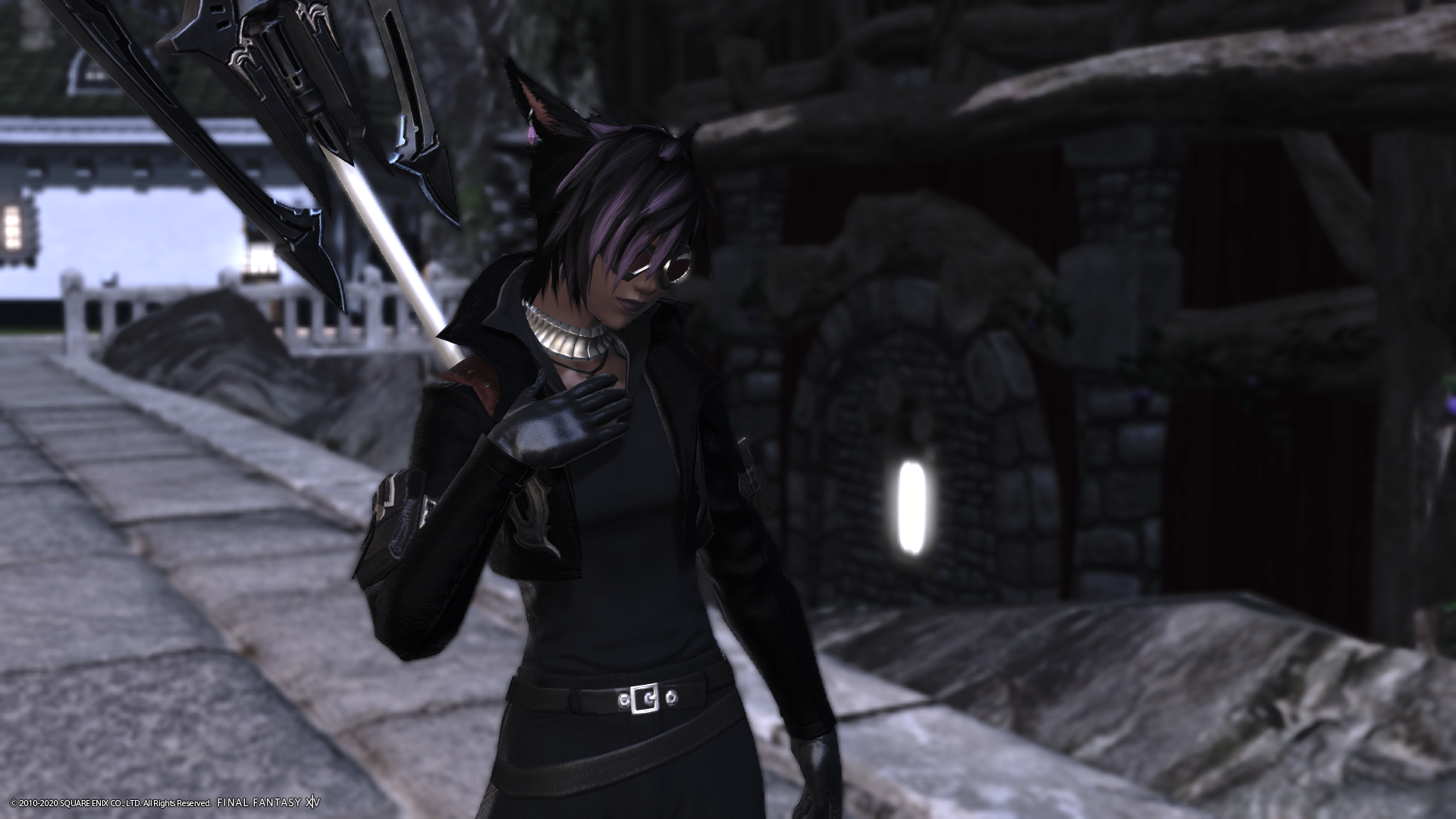 Oh, I'm sorry. I thought this was a Nomura FF. My mistake, I'll go brood and look stylish somewhere else then. 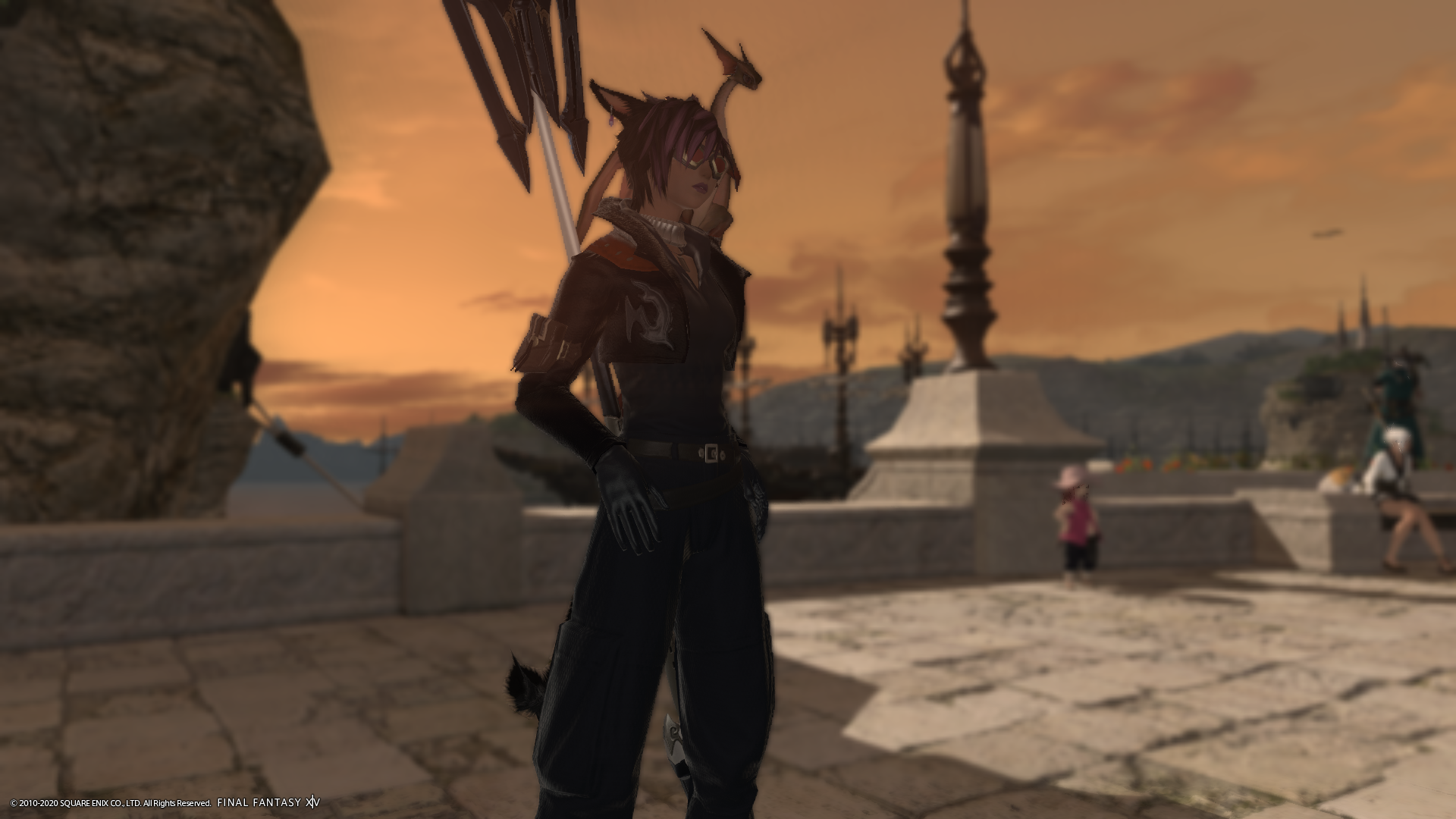 Just a bunch of dragoons because they look cool: 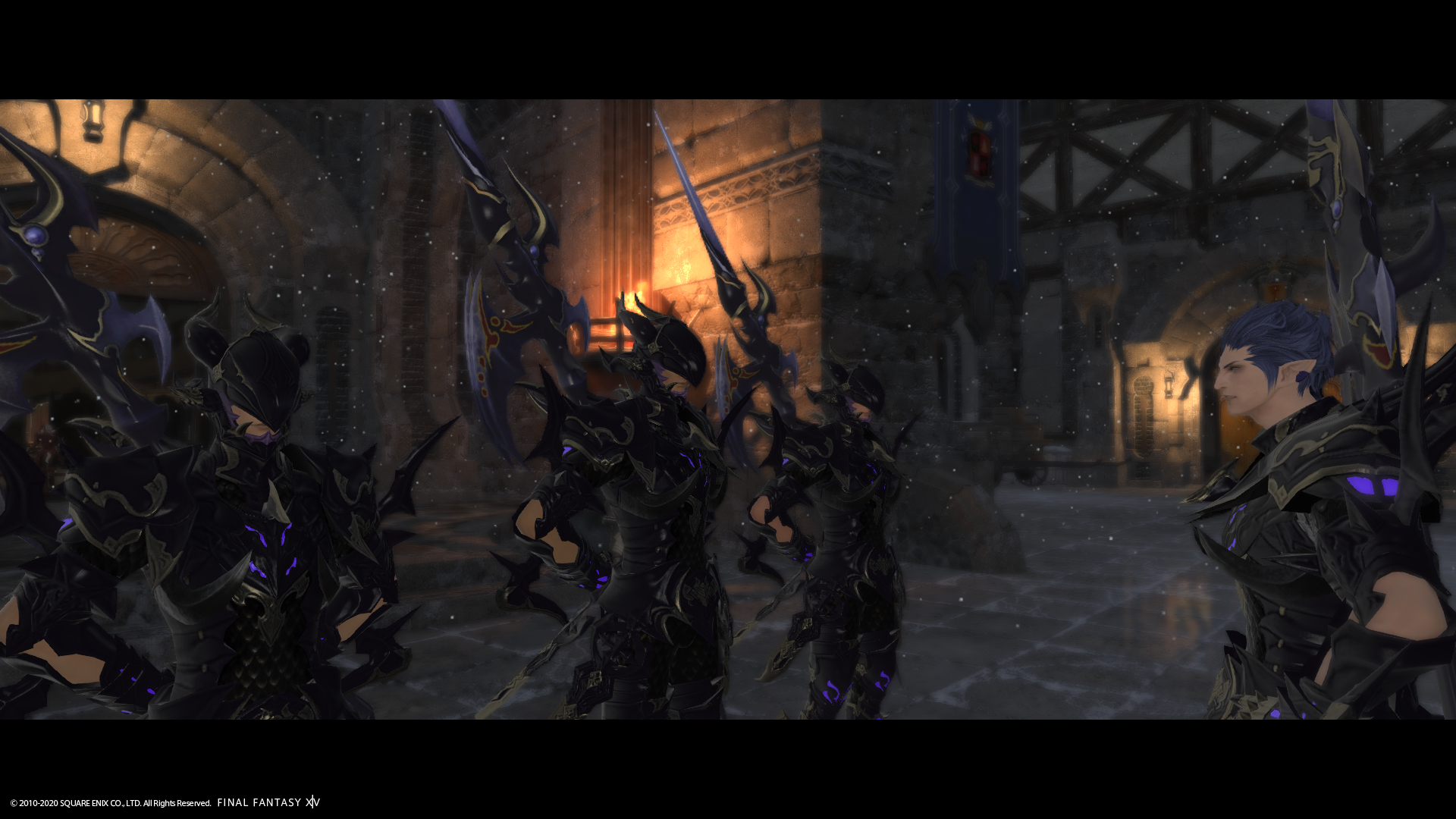 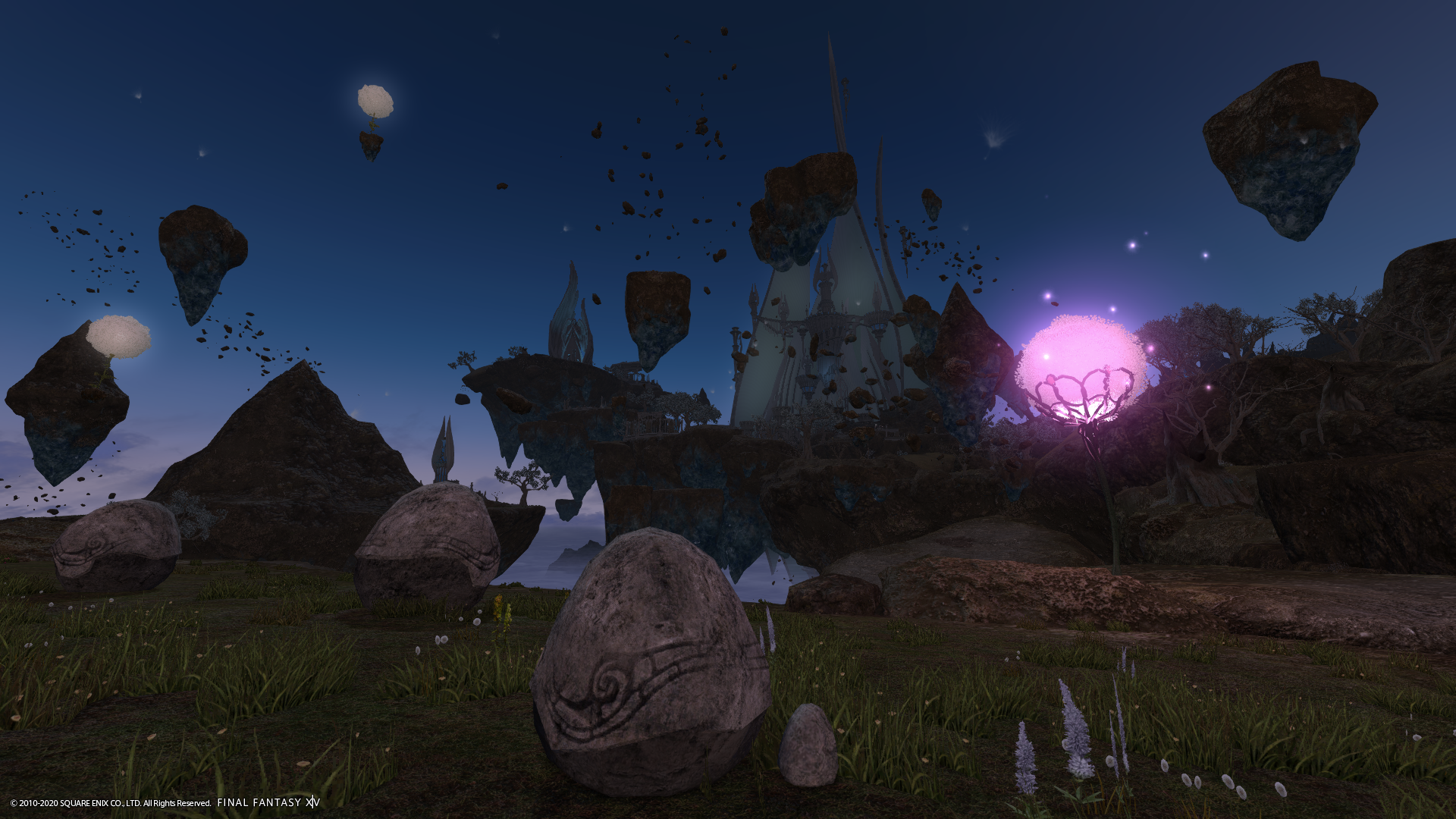 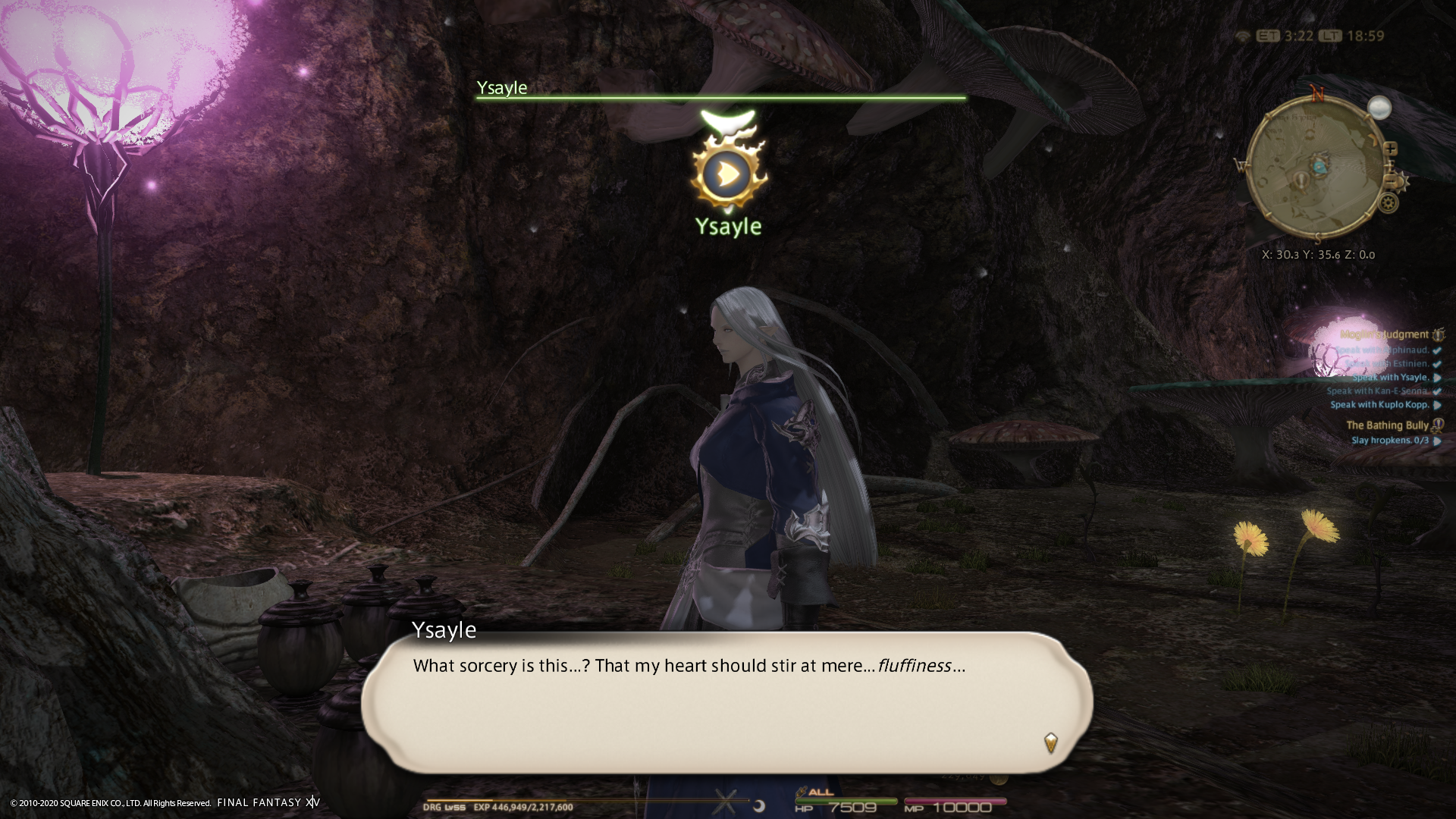 One of those rare times when it's sunny in Coerthas: 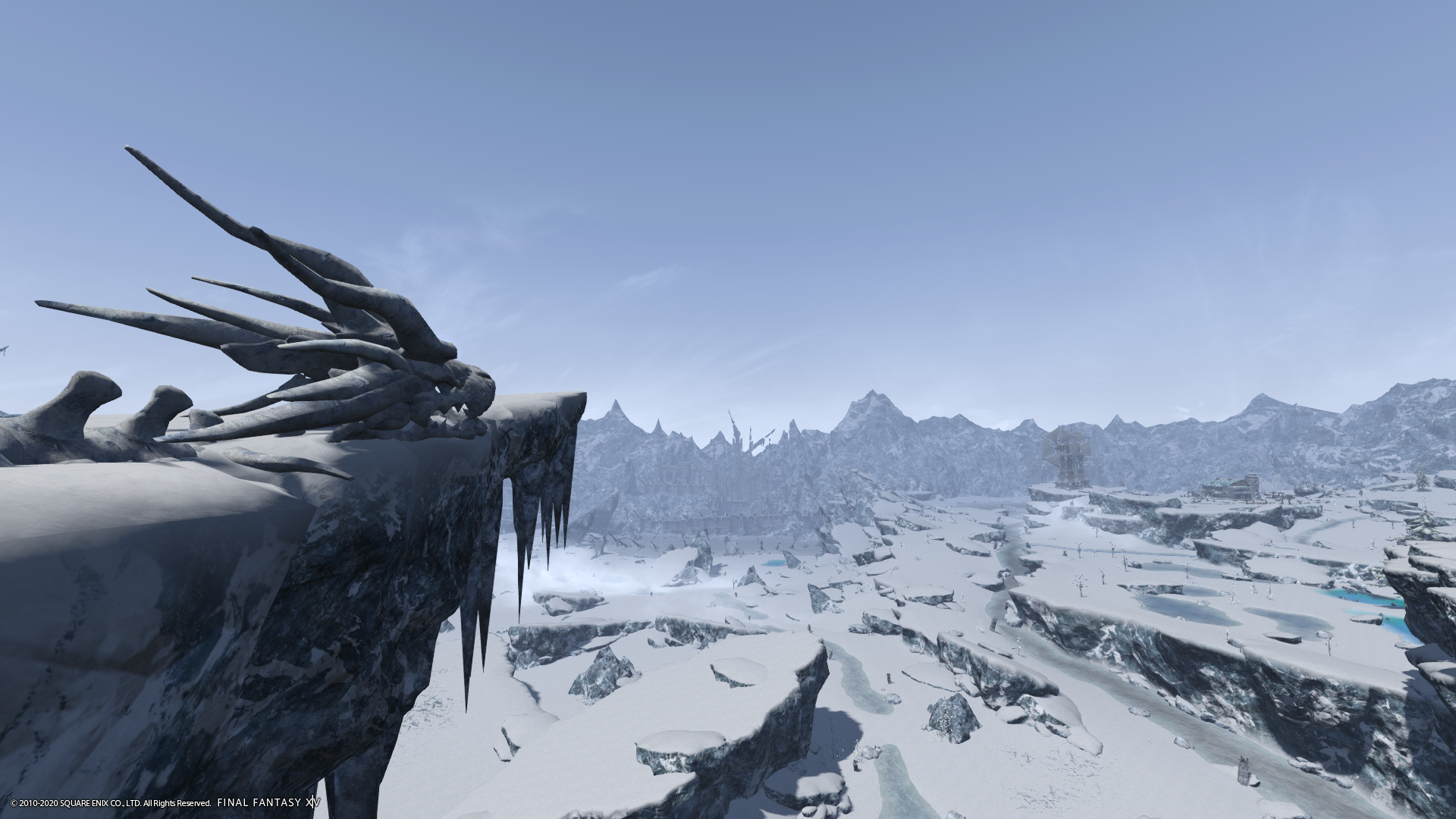 On the subject of...interesting user names: 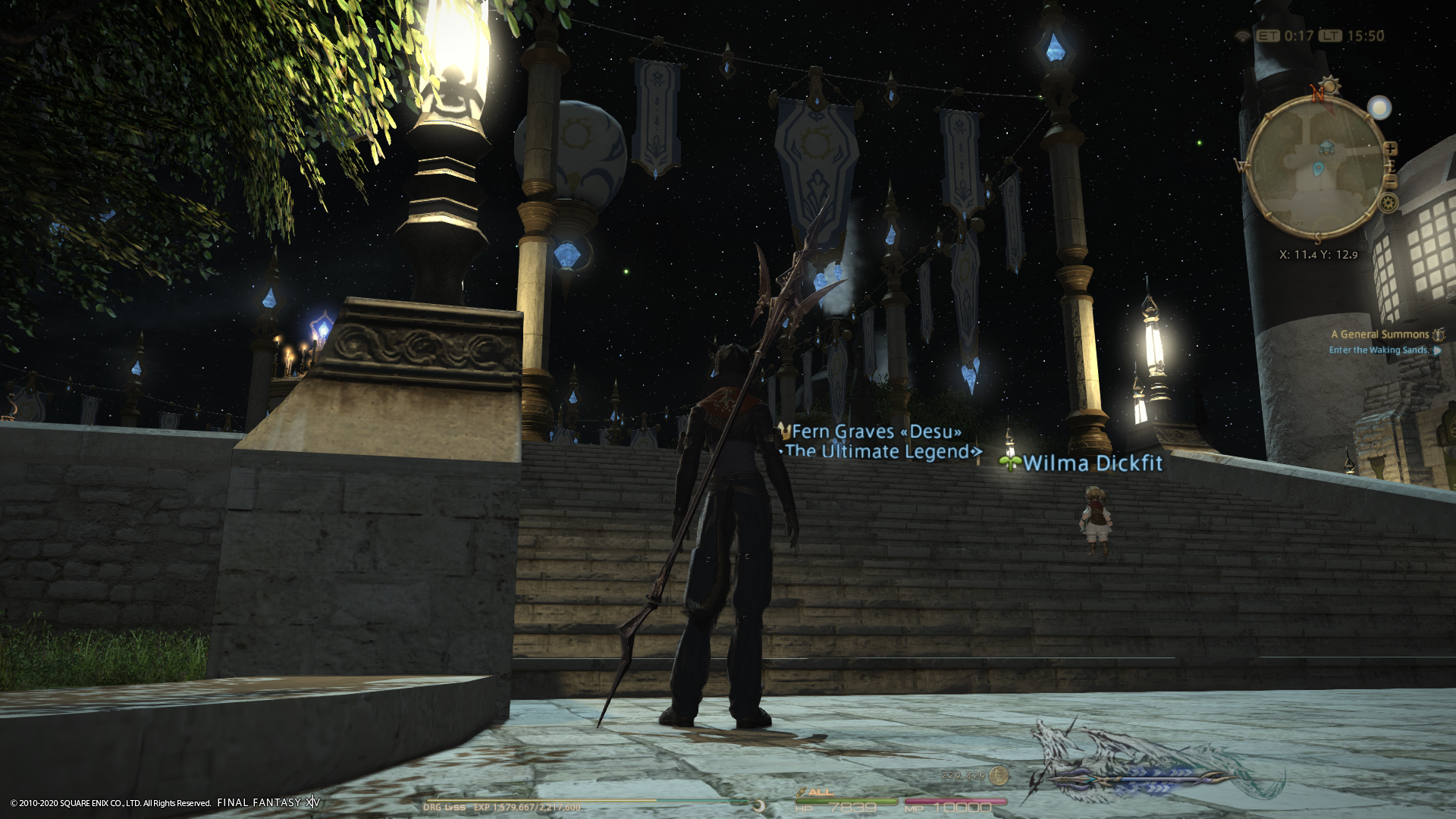 I lol'd at this line: 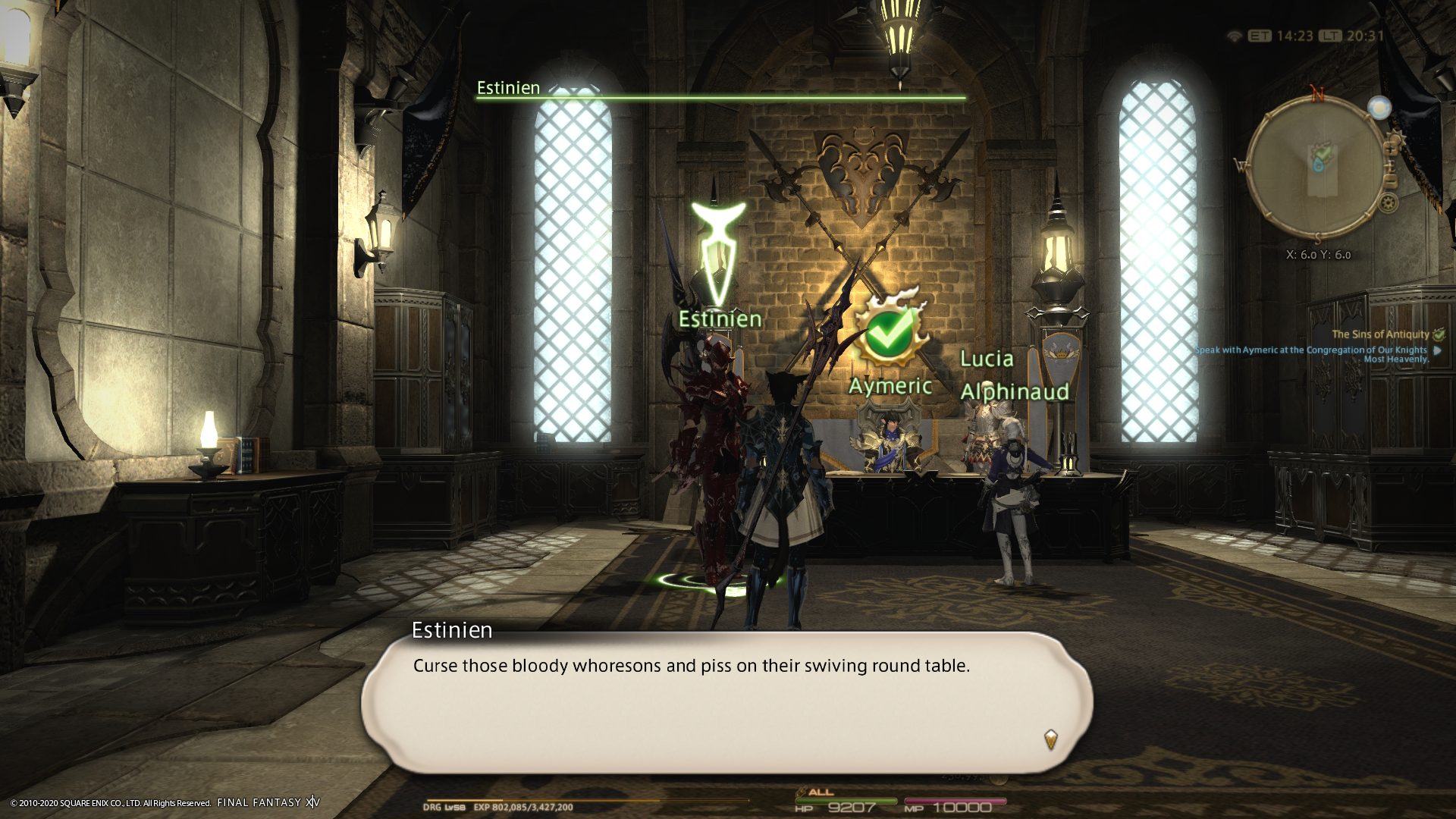 I had to look up what "swiving" means. It's an archaic word for...fucking. Final Fantasy just dropped a stealth f-bomb.

So, Hilda is the hottest character in the game, don't @ me 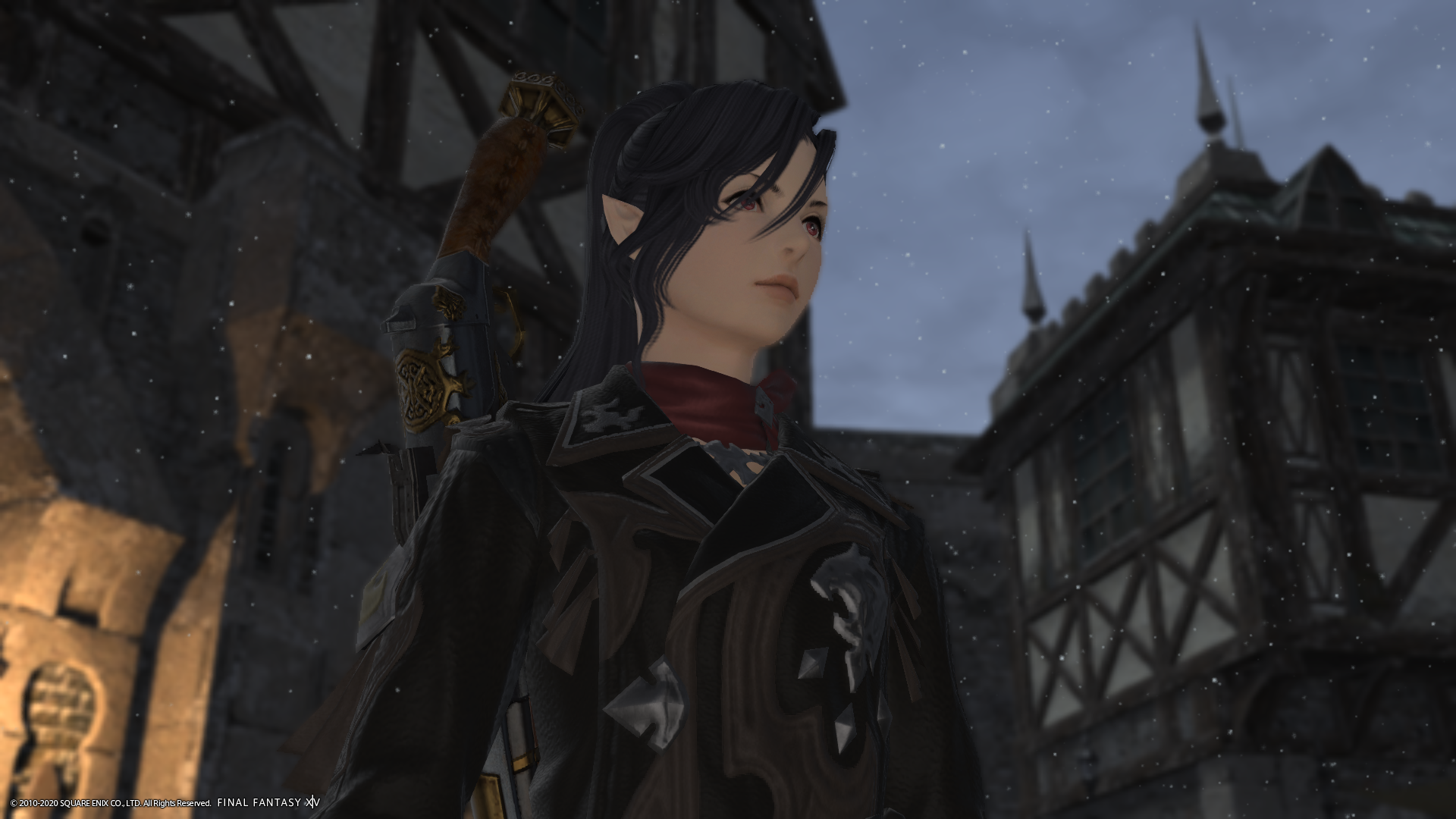 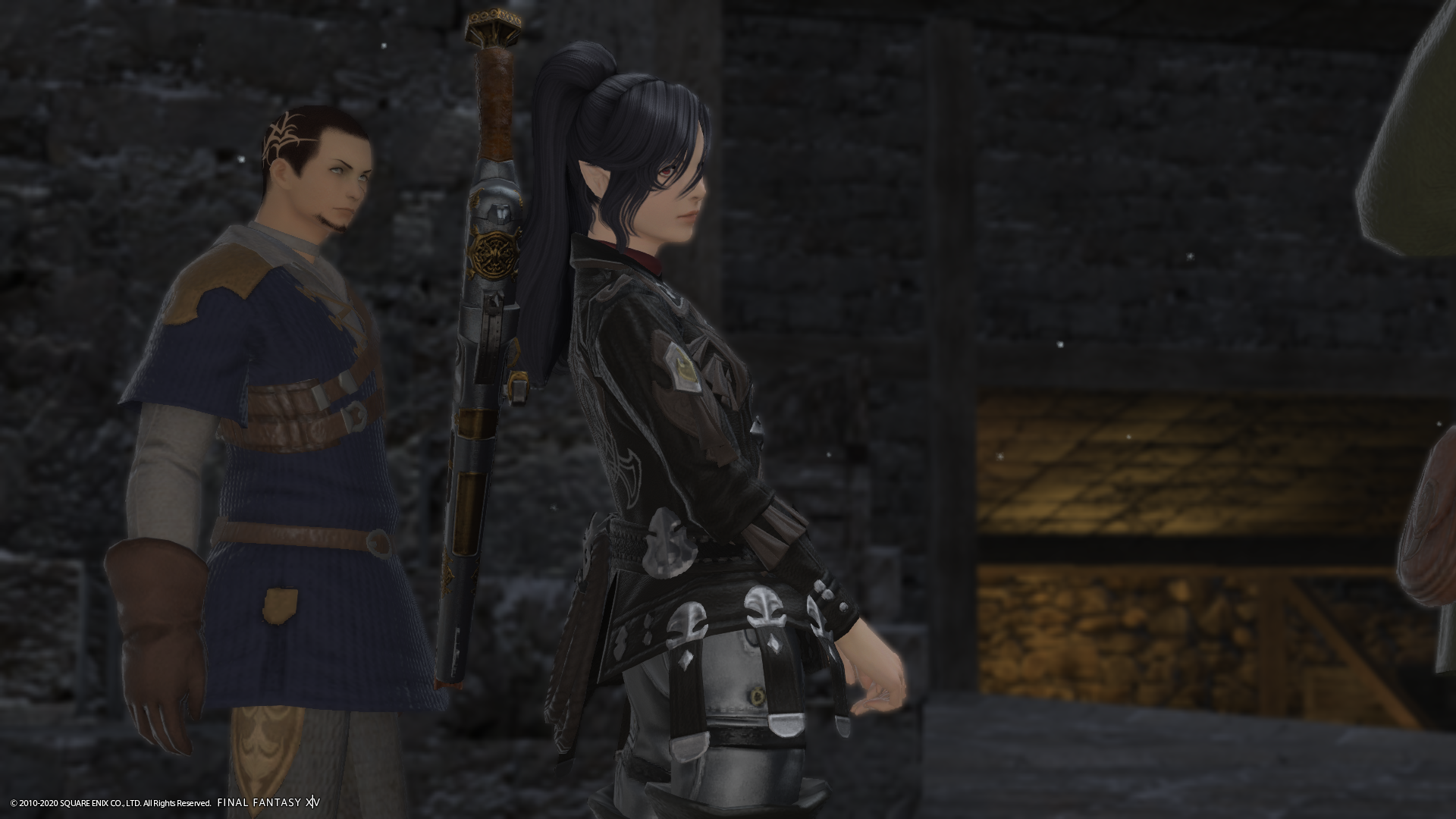 The Enterprise Excelsior during sunrise. Had to get a shot of that as sunlight is pretty rare in Ishgard. FFXIV is kinda like real life when it comes to taking pictures. Sometimes you really gotta wait for the right light. 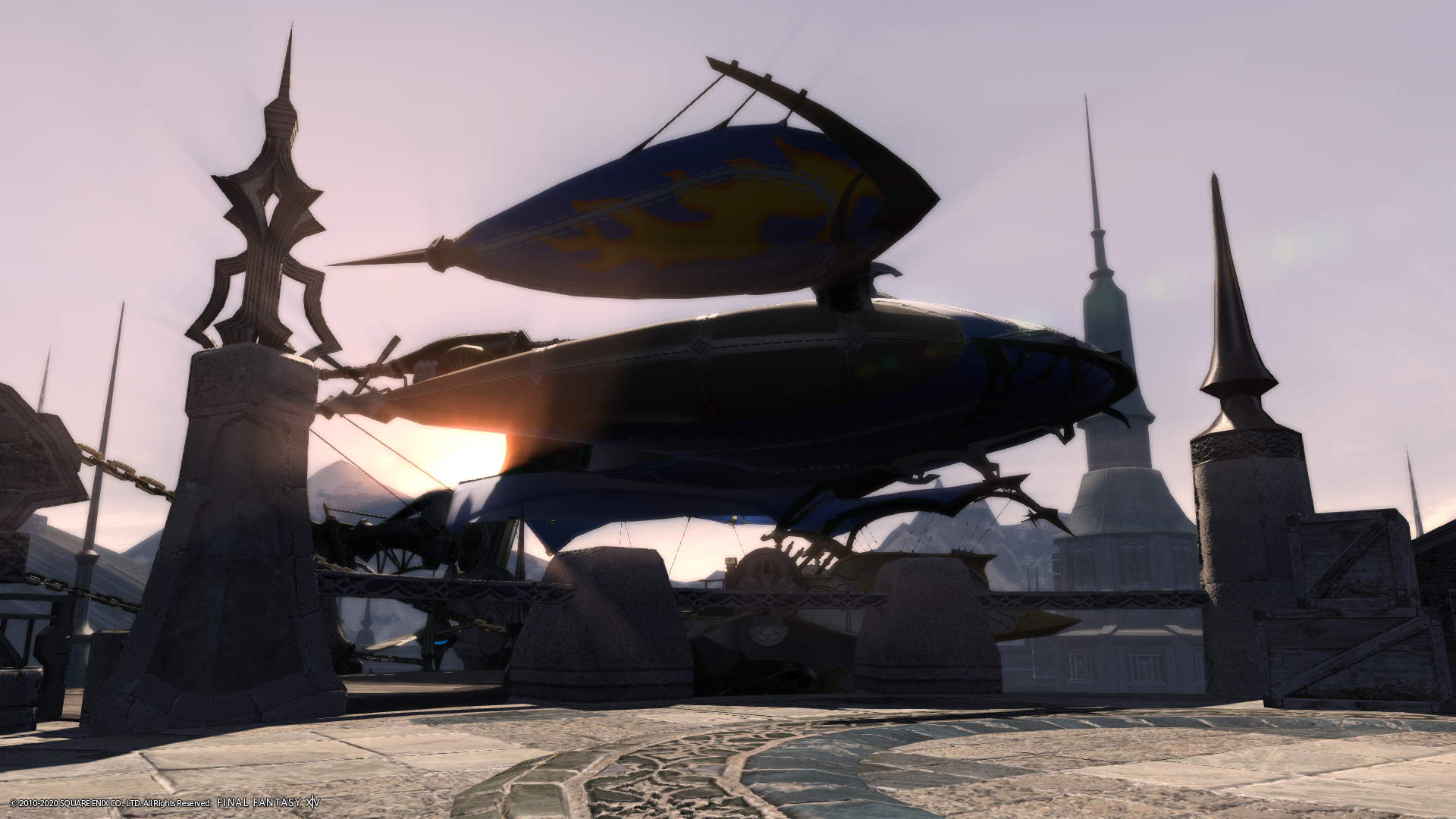 Cid and his baby: 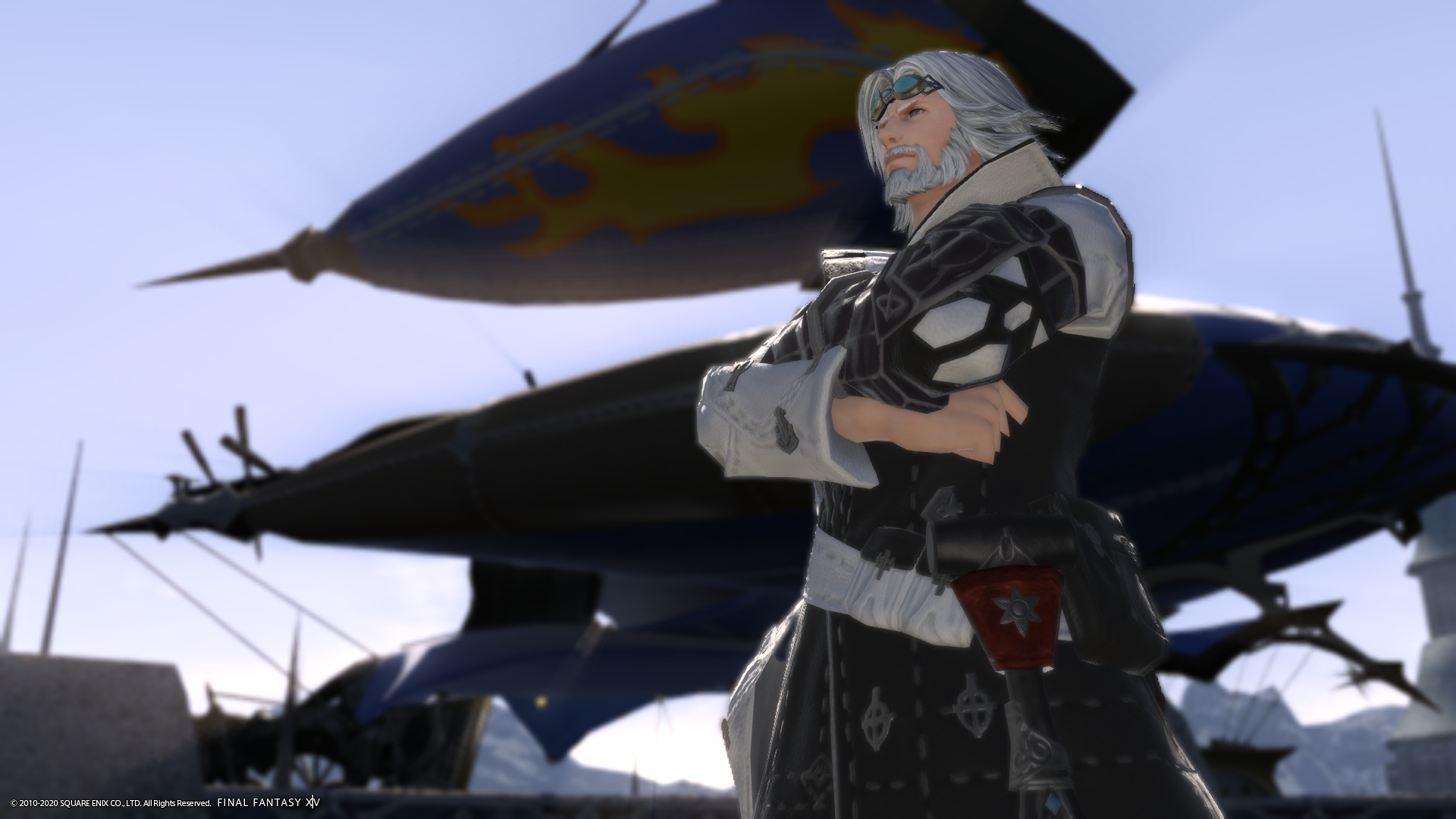 That one time I entered the Dravanian Forelands and it had the weather condition "royal levin". Apparently this is another FATE situation like Odin? It looked pretty atmospheric. 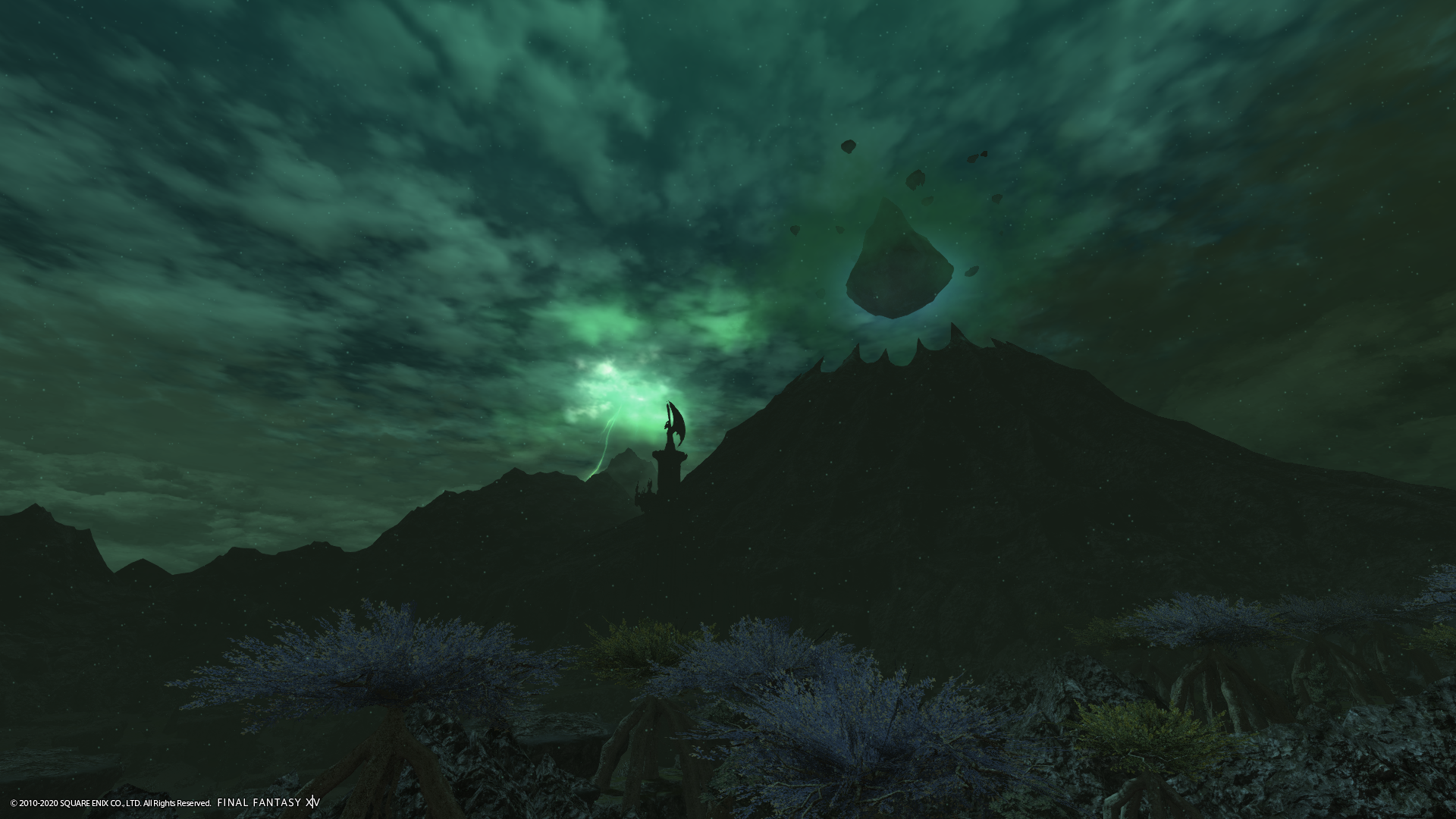 Y'Shtola in her new outfit! I was glad to see her back. Surprised that none of the other Scions have resurfaced yet since the end of 2.5... 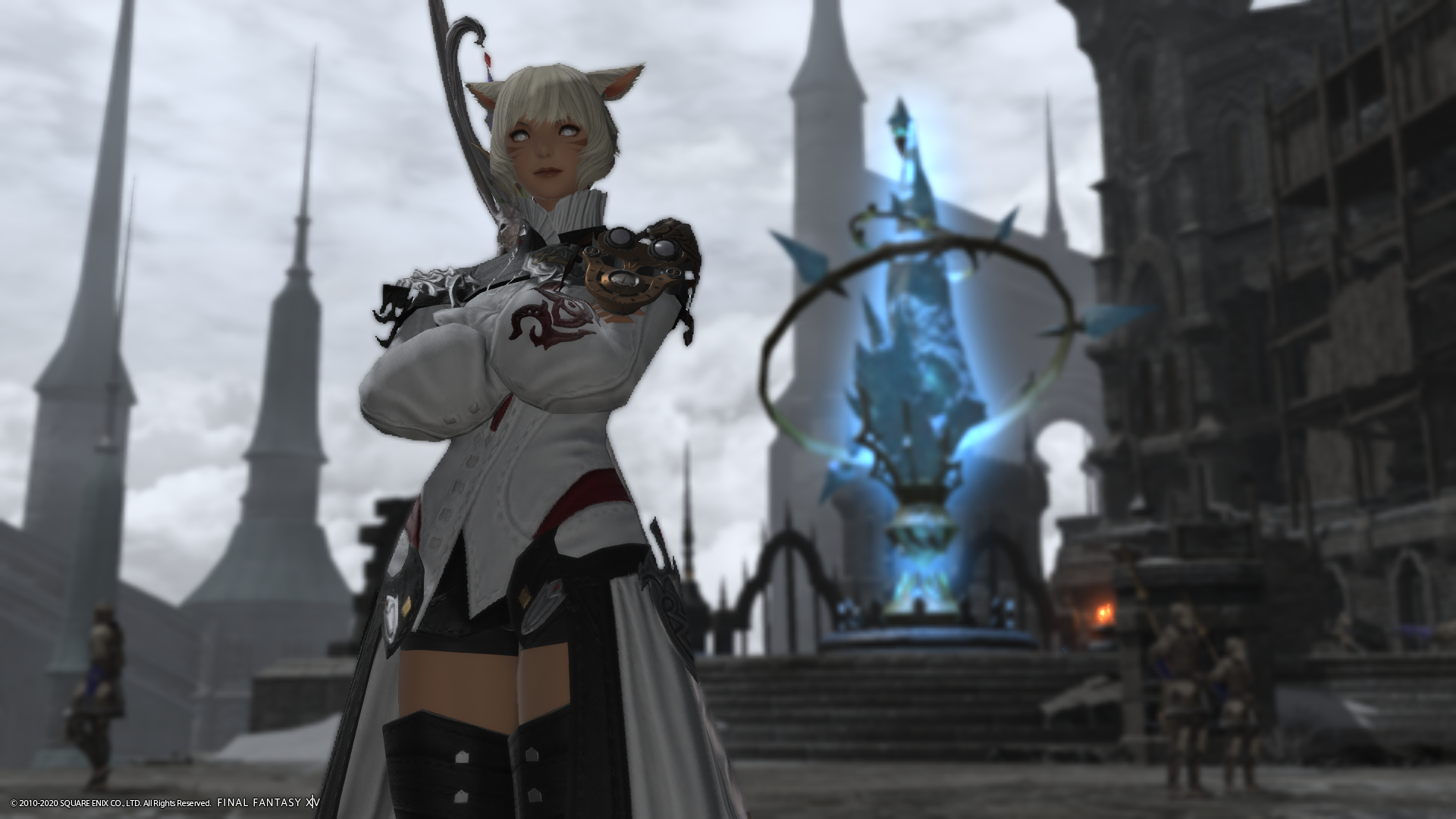 Honestly, her old outfit always looked like she was just wearing a regular white sweater+blue jeans from afar and I always thought it was kinda funny. That staff is also a massive upgrade from that twig she was using before.

Top 10 phrases you did not to expect to read in FFXIV: 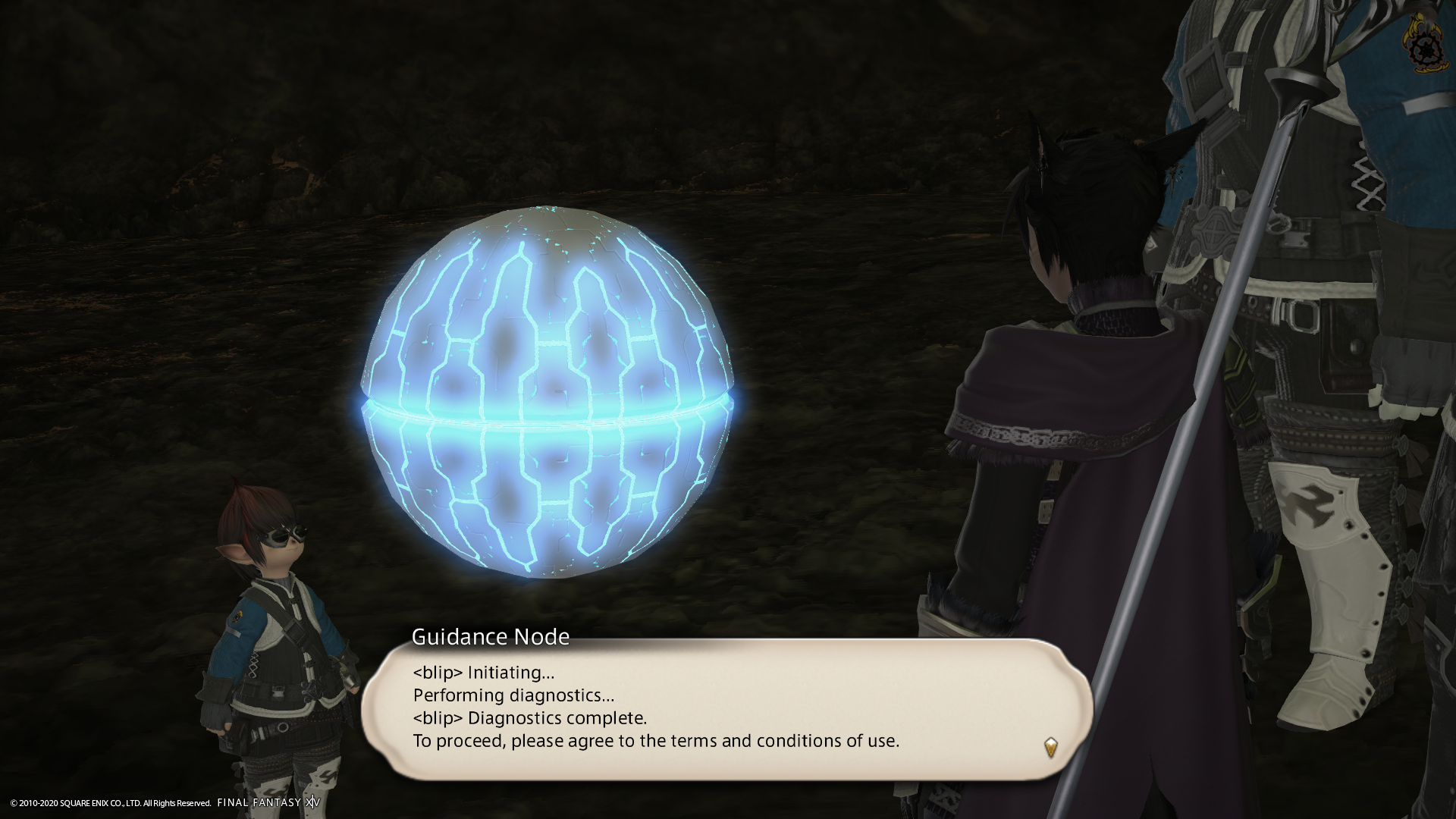 Just a cutscene snap, because the lighting looked kinda nice: 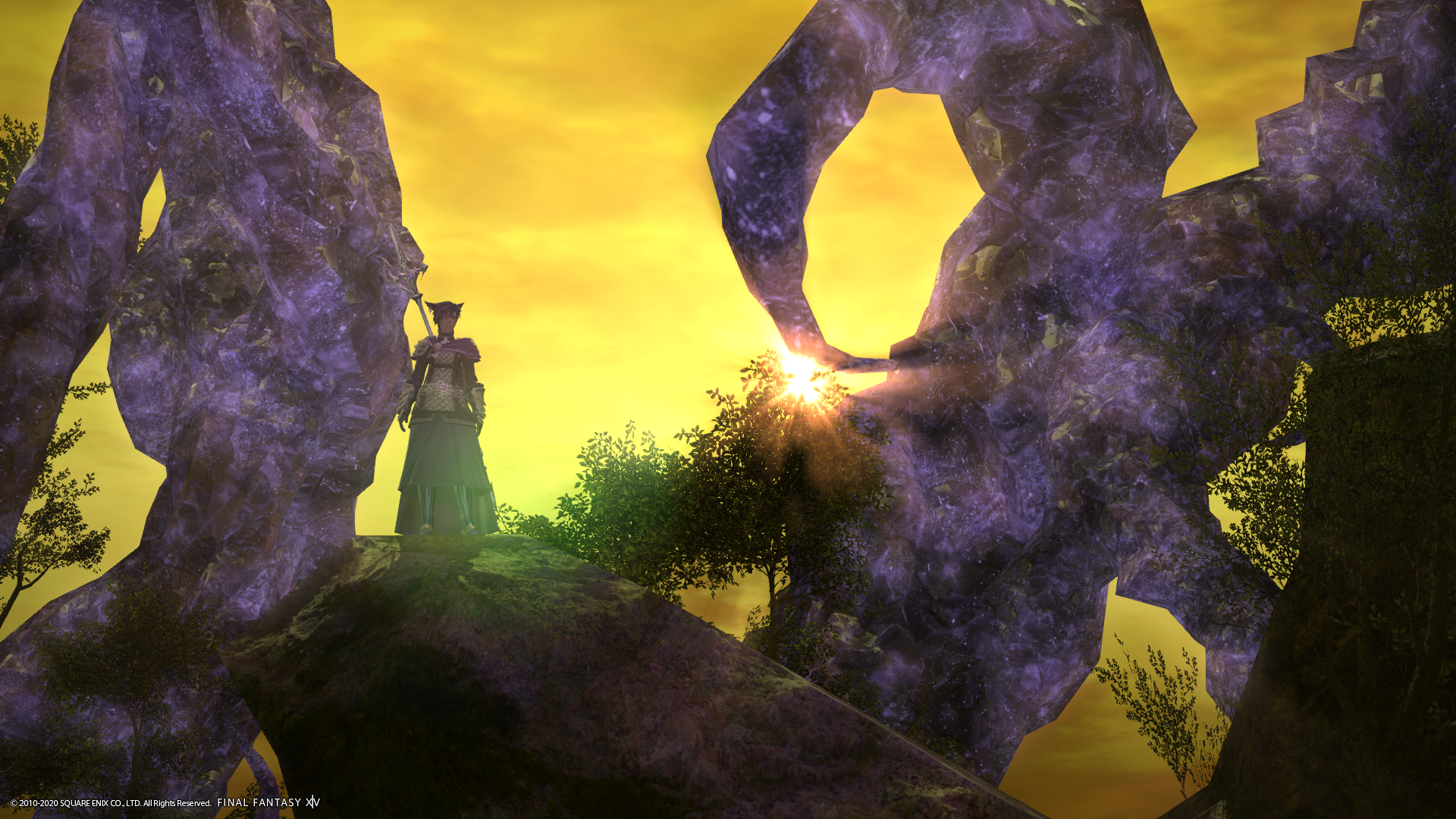 I do like the gear with capes (suck it, Edna!): 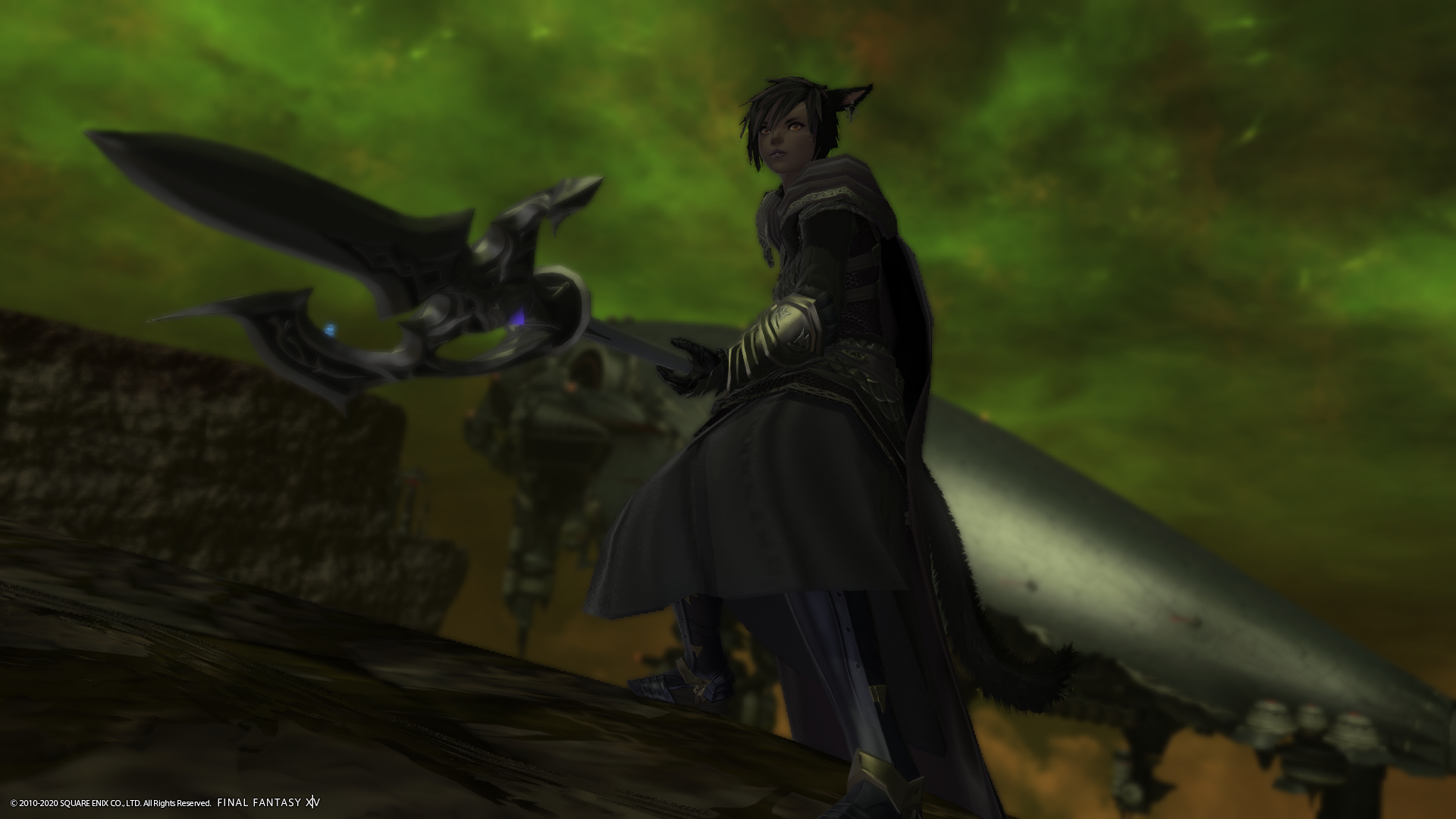 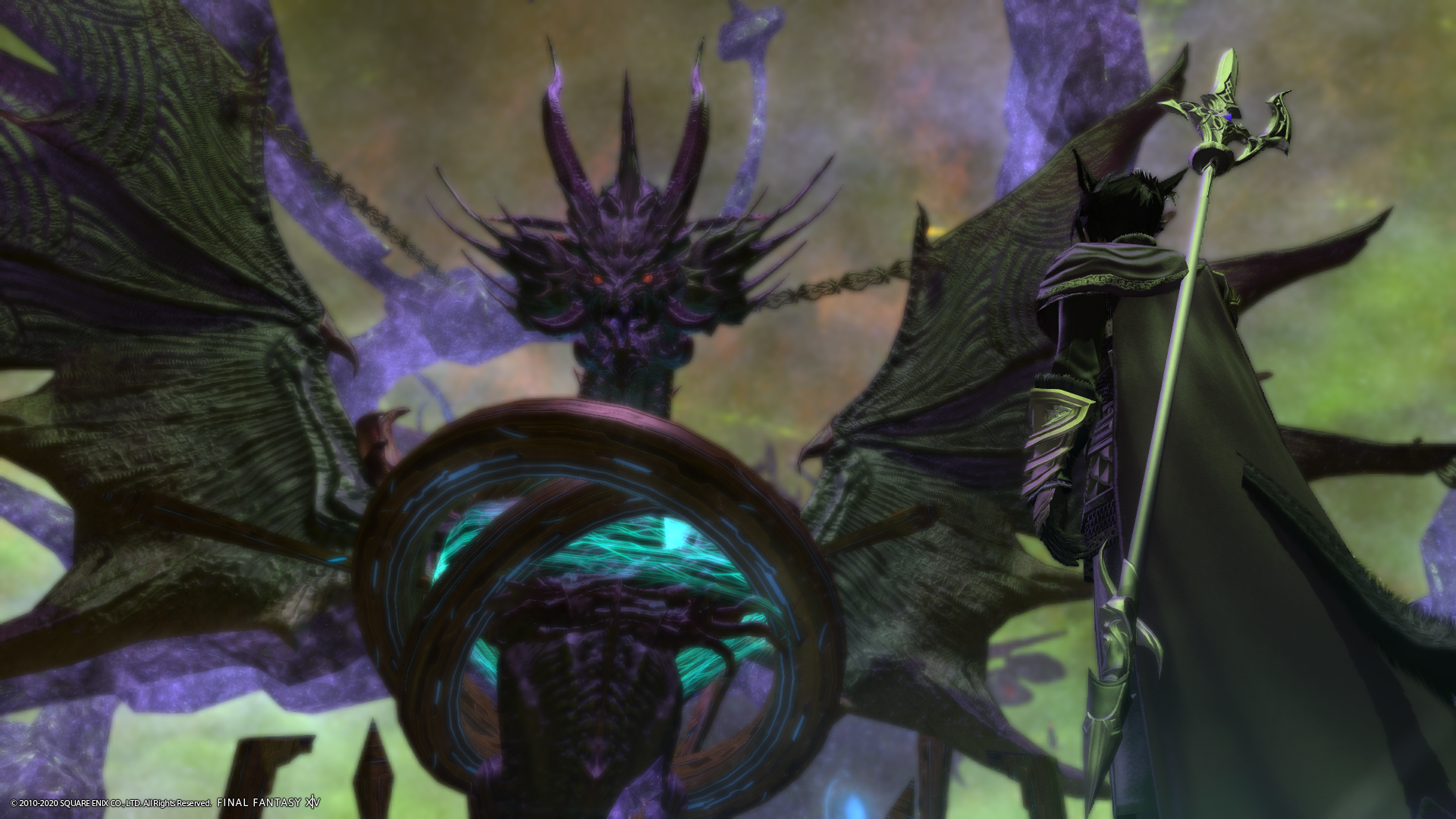 I wonder if anyone else is like me and still prefers the Chocobo mount over all the other weird and extravagant ones? I guess I'm in a half-RP mindset where I don't want to ride anything that doesn't make sense within the story.
So I guess it's fortunate that the story then drops the Midgardsormr mount on me: 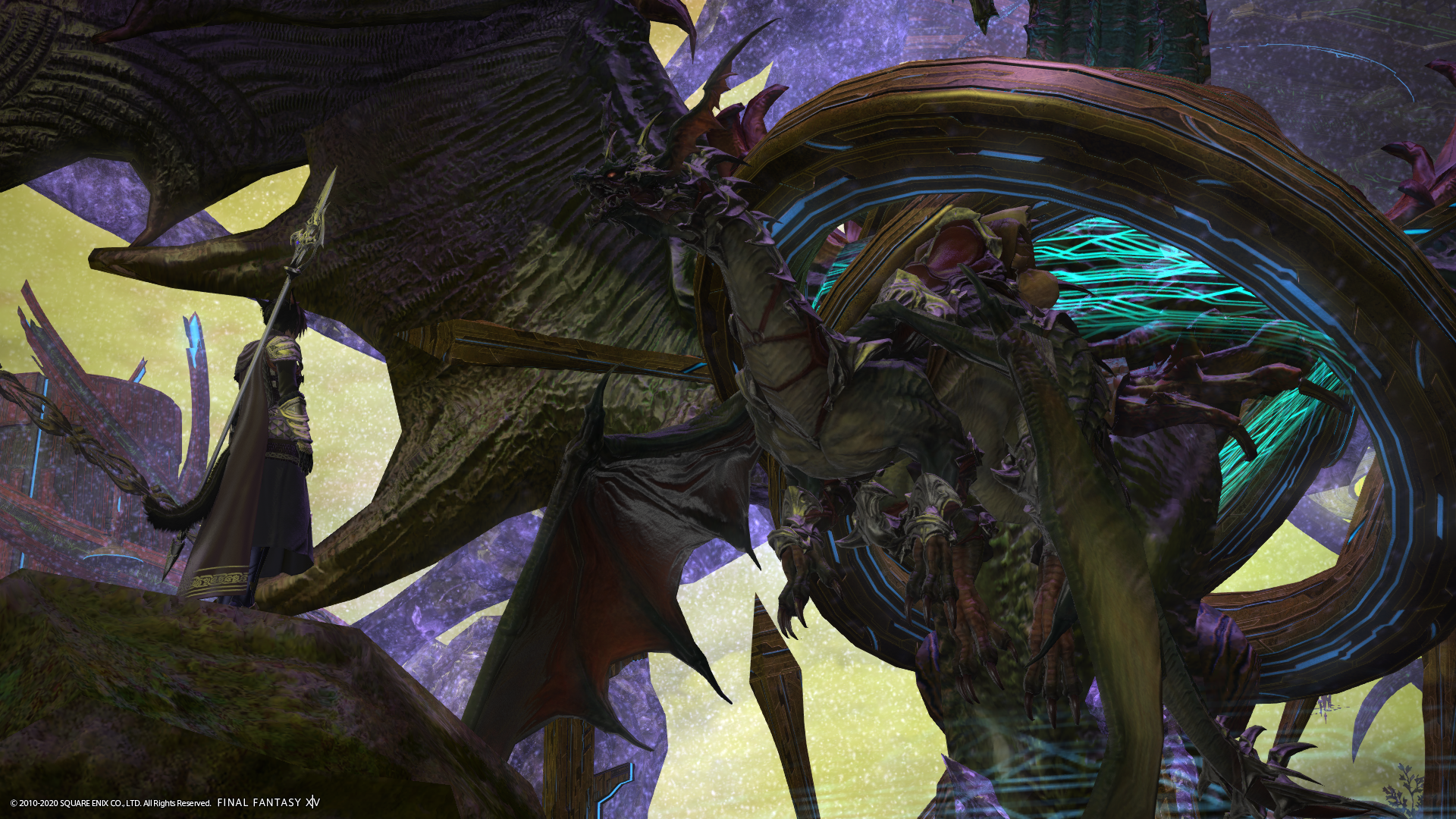 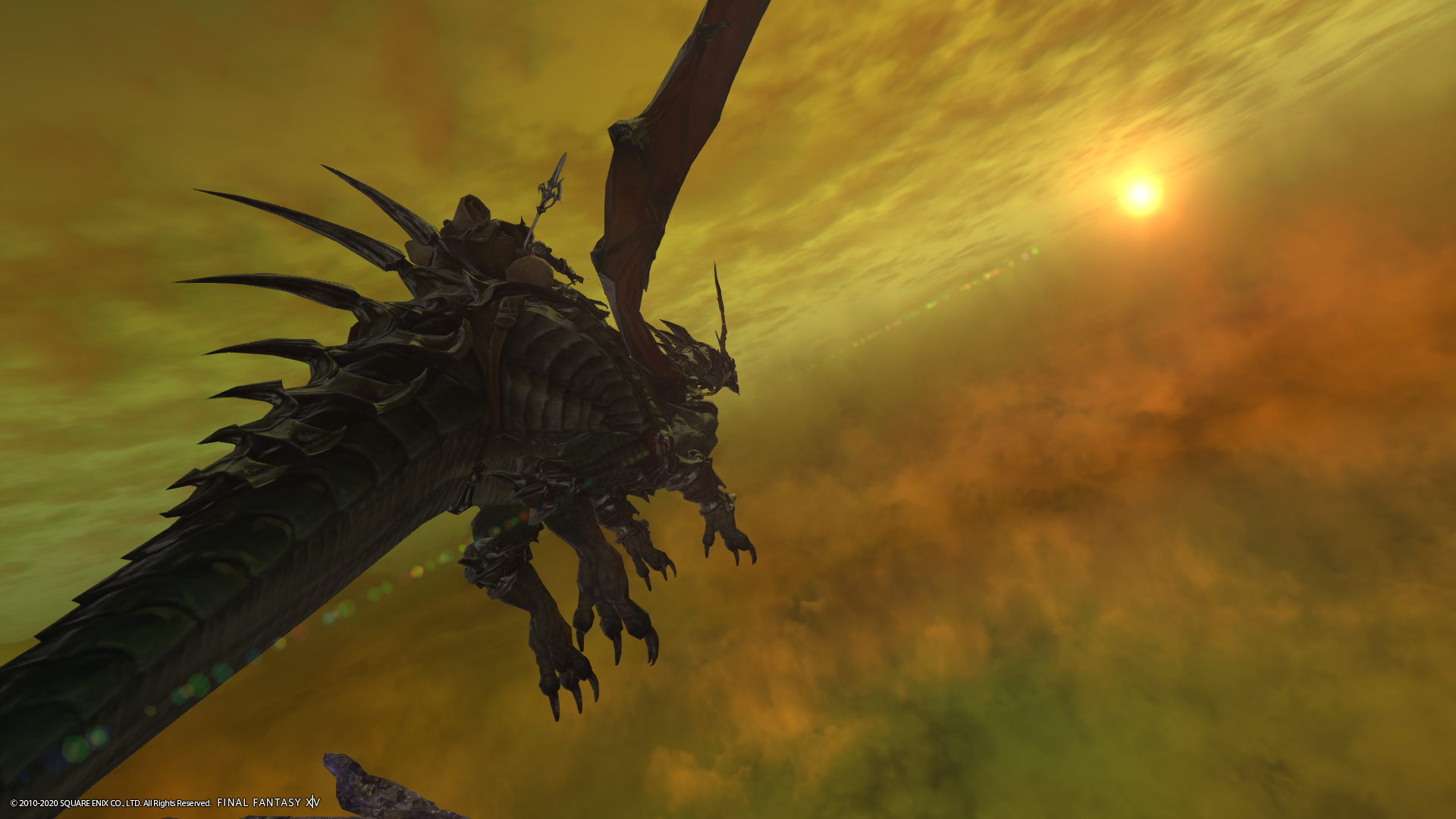 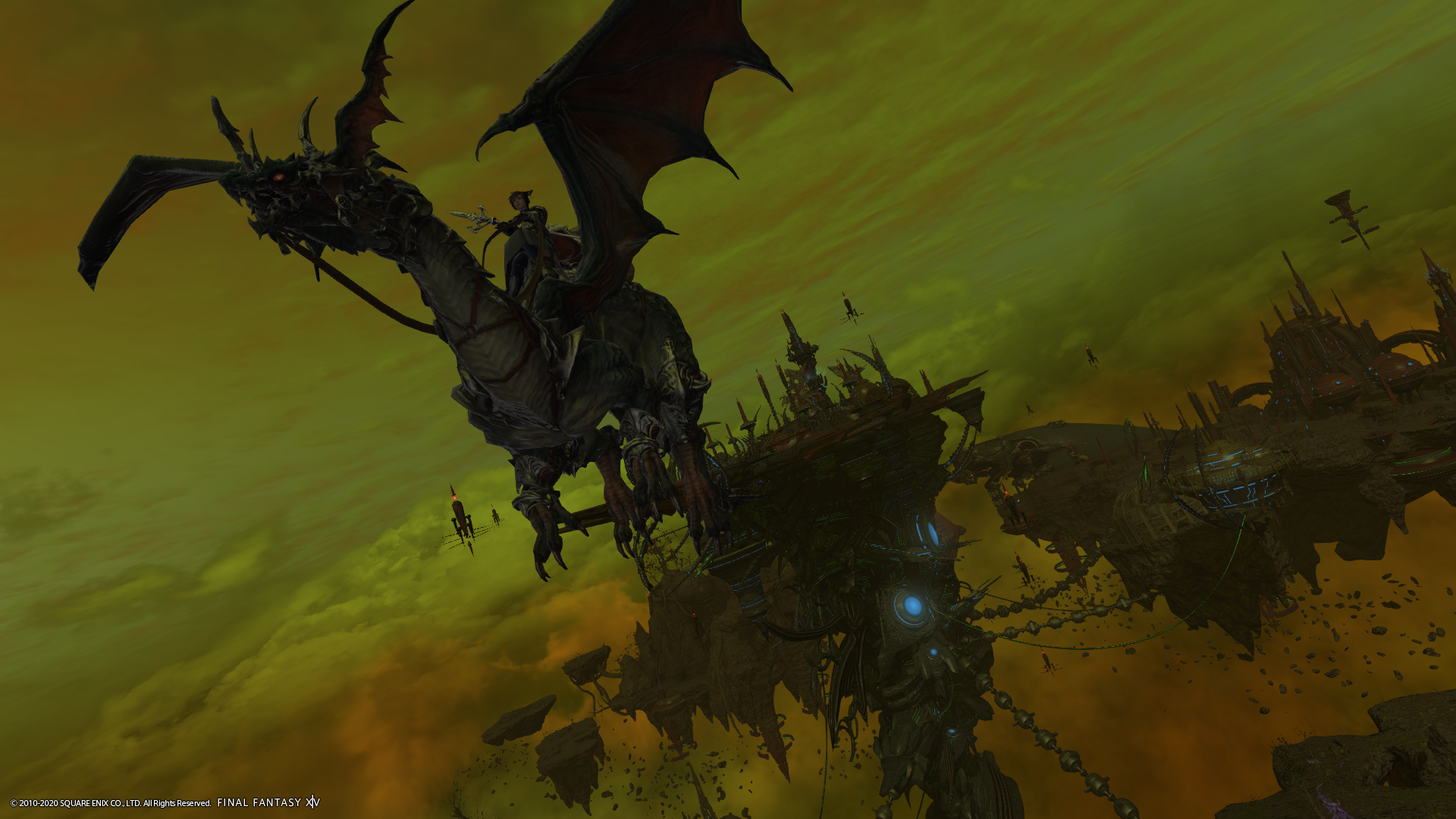 The following shots were taken during the Dragoon job quest. Occasionally they'll just have a few enemy models as a sort of stage prop and the actual battle doesn't start until you enter an instance. Which of course is an opportunity to stage a few battle shots since you can't actually do that during actual combat. 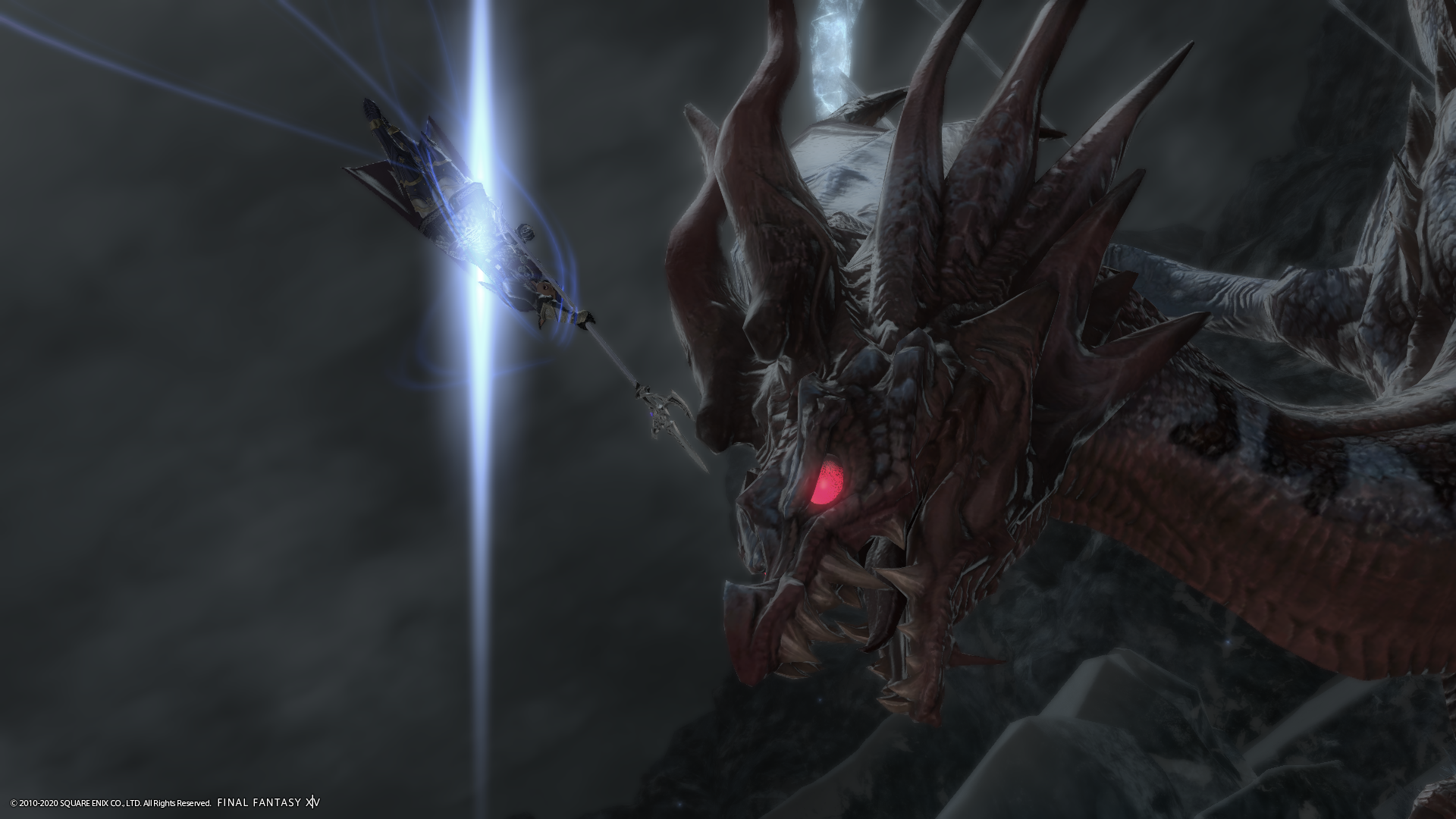 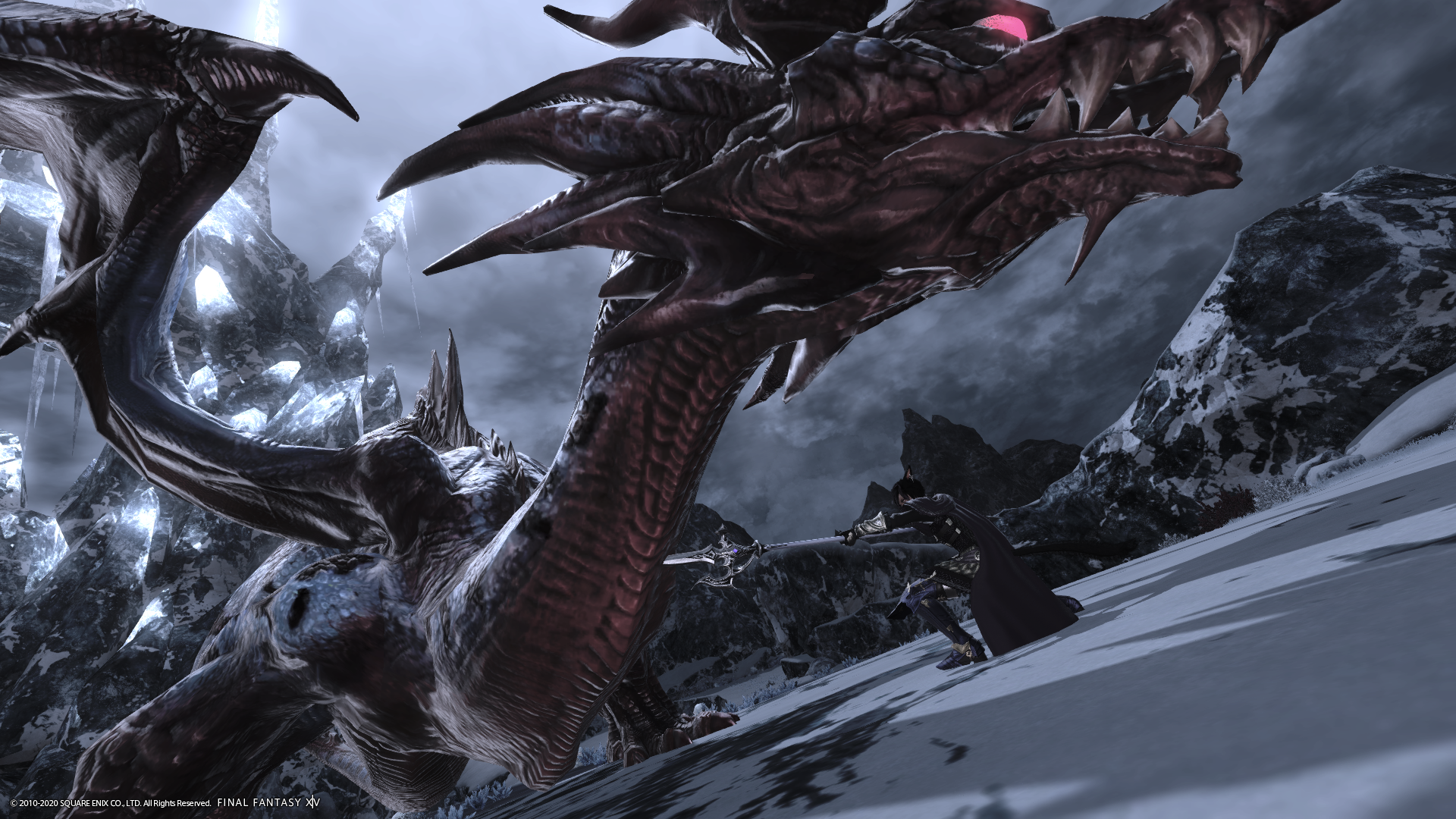 In other news, I have dabbled in selling shit on the market board. Following advice I took from a random Youtube video I have bought loads of cheap red, yellow and purple materia and such and had Mutamix in Thanalan meld them. Occasionally you get a green or blue one and those sold for a ridiculous amount. Made a couple hundred-thousand gil profit on that one

I also gave that Palace of the Dead a try after unlocking it months ago and forgetting about it. It's kind of interesting but I stopped after the first 10 floors because I got bored

Also, 3.0 is done now. Final battle against Knights of the Round was rad. I also wanna make final content being run with TLSers a tradition

Heavensward so far was pretty decent. The story wasn't mind-blowingly exciting or anything yet but it was engaging enough for me to not get bored. I can tolerate Alphinaud now as well. I kinda hated him at first because he had that spoiled-rich kid look with a spoiled-rich kid voice and a spoiled-rich kid name. You just wanna punch him.

It's neat how the main NPCs actually join you on your journey. It's almost like a proper Final Fantasy party. It never quite feels like it though because in the end you'll still do all the adventuring inbetween the cutscenes on your own and dungeons are done with player characters and they'll have to keep coming up with excuses to keep the story characters out of the trial and dungeon stuff. "Good job, <player name>, sure wish I could've joined you in this battle!"
Me too. Unfortunately I had to make do with Wilma Dickfit and Cuteness Fluffyborn over here.

And of course, the thing where you do trials with 8 people but the story treats it like the Warrior of Light did everything by themselves still persists. I do think this being an MMO and trying to also be a typical story-driven FF are a little bit at odds. I'm not sure if there is a better way to handle this either though. 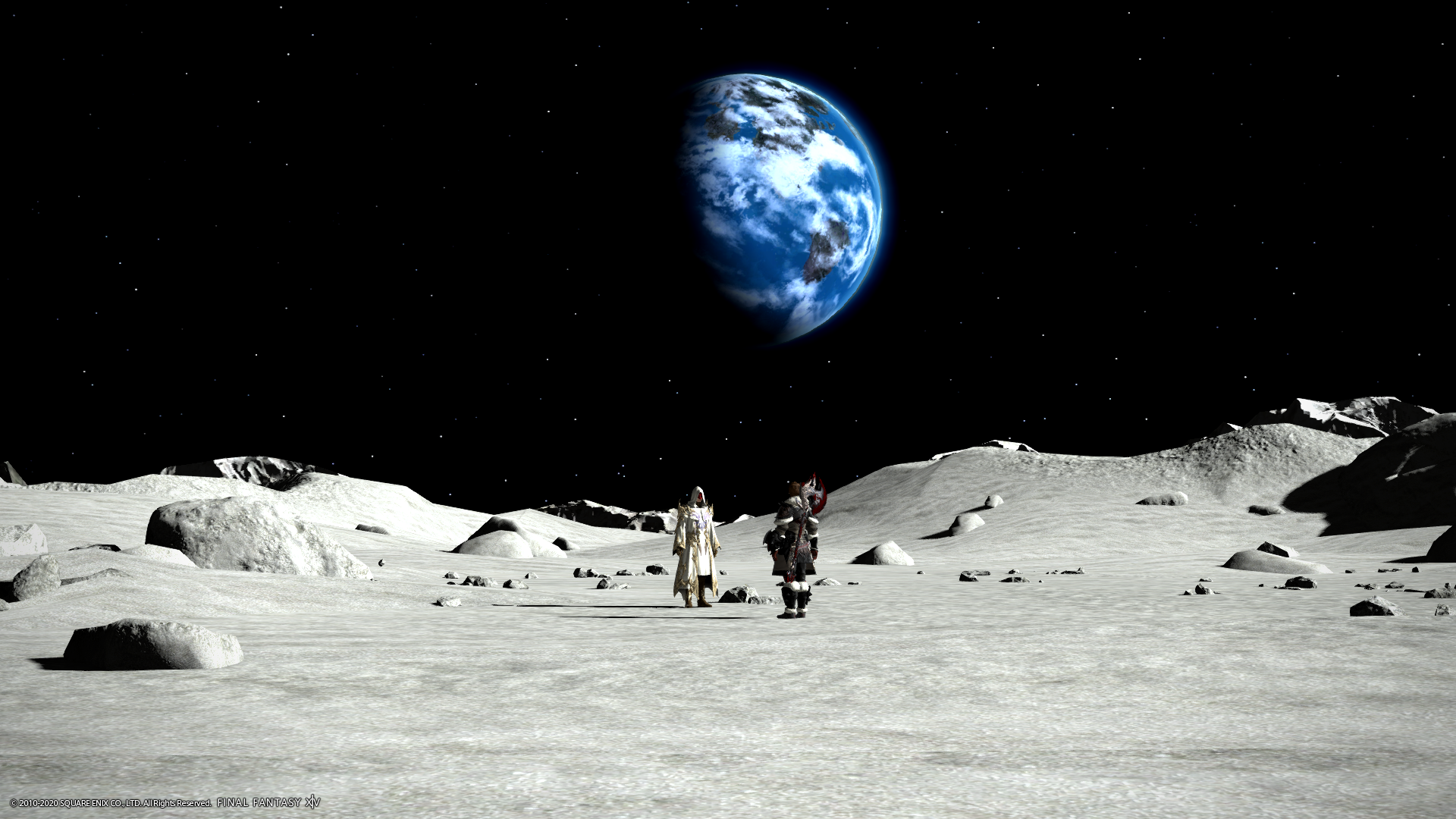 ...why the fuck are these guy on the MOON. WHat

Also, Warrior of Darkness, eh. JEEZ WHO COULD THAT BE OHH THE SUSPENSE-oh fuckin whatever it's Ardbert, the generic player character stand-in from the CG opening movies isn't it. You kinda get spoiled on those things when the anniversary event literally gives you a minion of this guy with the name attached to it, lol

Speaking of minion spoilers, I was perusing the FFXIV online store and there's this Y'Shtola one where she looks all gothed up and ready for a Nightwish concert or something and the German store calls it "splinter world Y'Shtola".
Fuckin...splinter world?? Did the store just drop a spoiler on me? Are there parallel worlds and timelines in this? Is this where Ardbert is from? Are the CG videos really just from a mirror universe where he is the main character? I'm just thinking out loud, don't confirm or deny any of this btw, no vague spoiling either
Eitherway it would be funny if I got spoiled on future plot developments by an online store and heccin minions

#239
ForceStealer said:
I say "iddle-shy-er" because I'm a filthy American, but I imagine the British way would be most like the first one you wrote