A few details were provided for the new show. Stewart revealed that 20 years have passed since the last time we saw Picard, in Star Trek: Nemesis. Stewart told the crowd at STLV “he may not be the Jean-Luc you know.” According to a report on Deadline the new series is not a reboot of Star Trek: The Next Generation and “will tell the story of the next chapter of Picard’s life.”
Click to expand... 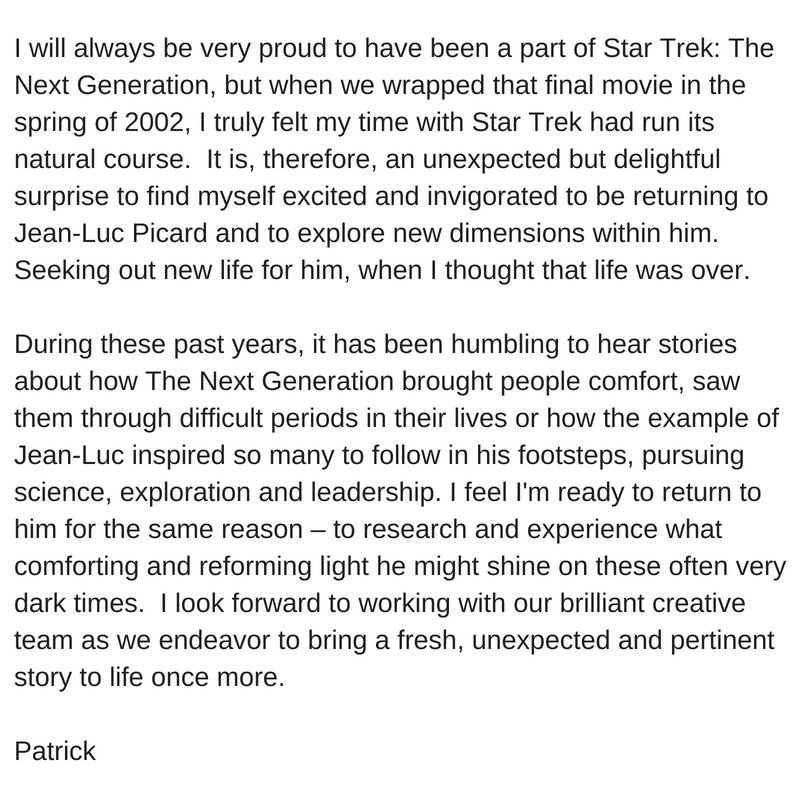 Would this be in err, one of the new bizarro splitoff wotsits? (the movies / that series where they have a magic instant transport anywhere thing)

#5
When they rumored about a bunch of new Star Trek series, I wasn't terribly optimistic, as Discovery has been uneven to say the least. But it's hard not to be excited for anything involving Picard.

I hope they make him an executive director or something, he should know better than anyone what makes the series work. More so than hip young directors that fuck up the formula to make it appeal to the lens flare loving y00f.

Seeing the footage of him delivering the announcement fills me with complete confidence in how this is being put together, why he returned, and what the show could be.

#8
Though I still need to finish Discovery and give it a full chance, I am really looking forward to seeing what they do with this.

I think we have this responsibility to continue to articulate a hopeful, positive vision of the future. I think if anything that’s more important now than it was when The Original Series came out... A positive vision of the future articulated through principles of tolerance and egalitarianism and optimism and the quest for scientific knowledge, to me that’s feels fresh nowadays.

Captain Picard is the hero we need right now. He exemplifies in some ways even more then James Kirk—and I’m not gonna get into the Kirk vs Picard argument because I love Captain Kirk, he was my first captain—but Picard is even more of an exemplar of everything that is best about Star Trek’s vision for the future.
Click to expand...
Yup. This series looks to be everything that I want.

#10
To me, dystopia has lost its bite ... it's such a complete crushing series of cliches at this point. The tropes have all been worked and reworked so many times.
Click to expand...

#11
Dystopia is old hat because the world we live in is already shittier or equal in shittiness compared to many dystopias that have been dreamt up.


Half of them have flying cars and lasers for fuck's sake.

The really fucked up dystopias have also been done to death so... yeah.

ForceStealer said:
When they rumored about a bunch of new Star Trek series, I wasn't terribly optimistic, as Discovery has been uneven to say the least. But it's hard not to be excited for anything involving Picard.
Click to expand...
I think Discovery was fucking great. A breath of fresh air for the franchise. It was nice to see a Star Trek that had some polish, that didn't pander to its audience (T'pal or whatever her name was pissed me off in Enterprise, Seven of Nine too, but to a lesser extent because she was so good at rinsing the cretins on Voyager).

Discovery's protagonist is probably my favourite of them all. Bit of a Mary Sue but that's standard really. She wasn't thencapt

The second half was a bit rushed though... I mean from the moment the emperor was revealed. After and including that moment I felt they got the pace a bit wrong, they were obviously keen to put a lid on that arc in time for the finale — I think it could have been done with more finesse.

The conclusion especially... it was pretty much pure garbage, I would say. The biggest problem was that the ethical quandary of eradicating a species to save one's own species was completely avoided with a cop out ending. I suppose it was a bit like Mass Effect.

But, like Mass Effect, Discovery was pretty fresh and it definitely left me hungry for more.

I'm a bit of a hipster in that I grew to like DS9 a lot, and I thought Enterprise season 3 was dank and made up for how bad the rest of it was. Discovery needs to have a few more seasons before I can call it my favourite Trek, but if it stays consistent or improves, it will be.

That said, TNG sequel is phenomenal news and I'm genuinely shocked Patrick Stewart signed up for it, I guess he figured out that Shakespeare is dead and being remembered as Xavier would be a worse legacy.

Don't get me wrong, love Shakespeare, but there are other authors and playwrites whose work simply never graduates beyond the stage.

Some new details about the series, and the events that it follows with Picard: https://www.hollywoodreporter.com/l...rts-picard-series-reveals-new-details-1174452

Time to rename the thread to Star Trek: Picard I guess

Well, at least it's also available via Amazon?

Yeah, Amazon is for everyone else.

Ah.... time to possibly revel in the benefits of being in the "everyone else" category for a little bit, depending on how Amazon does stuff then.

Captain Picard is the hero we need right now.
Click to expand...
I really like that line. I hope it becomes like a tagline or meme or something. Or even gets used in the show itself.

I'm a huge Jean-Luc Picard / Patrick Stewart fan. He was just so delightfully stern and commanding, but still able to be a little silly at the right moments. Although I'm still fond of dark-and-dour themes, something more uplifting is refreshing, especially now. I'm eager to know what they plan to do with this.

As a side-note, I didn't mind Discovery (every time I say ST: D I laugh xD). It's not the best Trek IMO, but there is enough twists and character development to engage me.
I think Burnham is a bit of a Mary Stu (everything is about her!) but she's a great character with her intensity. It's also nice to have a minority lead. And I adore Christopher Pike! Picked the best possible actor to play him.
Last edited: May 24, 2019

#22
CBS posted a teaser and then took it down for some reason, but here's the mirror:
https://streamable.com/ad5re

Looks hype af to me