Tifa's Appearance in the Remake and Why It Should (or Shouldn't) Matter.

re: Tifa as a beauty.

Wow, I never really noticed. I guess it was assumed by the way folks would treat her and the tropes she fit into? 'Girl-Next-Door', the (subverted) 'Veronica' of the 'Betty & Veronica' trope. Ms Fanservice. But I reckon her appearances were never directly addressed in game, no. Cool observation!

#27
Well, if they like 'em young and Asian, I suppose they still got Yuffie.

Fangu said:
No but really, do anyone even mention in the game ever that Tifa is a beauty?
Click to expand...
Evan Townshend (in "The Kids Are Alright") describes her as a beauty.

Cloud's optional "Next to you, who wouldn't?" comment implies as much. Don Corneo will call Tifa "this little beauty" if he picks her. As opposed to "slender little girl" for Aerith and "healthy-looking girl" for Cloud. Canonically Cloud is healthy looking as far as girls go, so the adjustments to Cloud bear out.

#30
Also, I just remembered when Cloud remembers when they were kids and he feels left out and all that. Tifa's a popular girl.

I am in agreement

I was gonna bring up the fact that Tifa was popular as a kid and Cloud had a crush on her, but then I thought, "Idk maybe she was just really fun to be around?" 😂🤷🏾‍♀️

#32
I kinda throw away all of Corneo's statements, since, well, he doesnt seem to look too deeply into things. Woman = hot, to him.

#33
Wasn't there a very strong foreshadowing hint in Crisis Core when you do a side quest for the guy who'll found the 7th heaven?
Can't seem to be able to find the quote though...

Yes, when Zack comes up with the name Seventh Heaven, the guy envisions the young girl behind the bar to have a big bosom, long legs, just a killer figure.
C

#35
AC Tifa is perfect. I dunno if ACC's looks different. She looks good, while also looking like she can smash your face in should the need arise.

Random guy in Mideel says 'ain't you a beaut' when Tifa is party leader.

Now, on to Cid's appearance!

Of those four face shots, 2 is head and shoulders above the rest.

I want 1 and 2 to make a baby together. That would be my perfect Tifa I reckon, lol.

I prefer #4 not so much because of the face shape but because the colors are just right and I like the way her hair is arranged. Her hair isn’t too dark and she has red eyes. That’s all I want. OG Tifa had dark hair but it wasn’t blackish, IMO.

And Vincent already has the black hair/red eye dynamic.

aayyye i get you. The colours are something I respect about KH!Tifa lmao!

I guess I just prefer the cartoony look.
I'll carry the torch for KH Tifa, then!

#42
Mr. Ite said:
Of those four face shots, 2 is head and shoulders above the rest.
Click to expand...
I can't tell if there's an intentional pun in here or not.

I am going to say that OG and Advent Tifa do it for me.

I'm not even sure why Advent Children Tifa is even an option....

Advent Children is 2 years after FFVII. It's post-game. Post-Meteorfall. The appearances of the main cast save for maybe Red XIII and Cait Sith should not be based on their appearance in that film. Tifa's appearance and style is for that moment in continuity of FFVII. Not FFVII itself. In terms of the overall realistic CGI style and depiction that was done for AC, okay. That's nice.

But in terms of style and appearance? Tifa's hair style, outfit, and everything in AC is not the same as FFVII and it shouldn't be used to replace it.

Tifa's look in Dissidia is most popular I think because it feels most in line with what her appearance was in the OG. She needs her burgandy/red eyes, dolphin ponytail, t-shirt and skirt. That's Tifa in FFVII. Nothing else needs to be done.

...I'm not sure who Blair Armitage is but um. Hard pass on that look.

KH Tifa is just Tifa from AC, except with the right color eyes. That's cool and awesome but no, that's not FFVII Tifa.

I expect the remake to do what they did with Cloud, Aerith, Barret, and all others they've shown so far. Keep Tifa's appearance firmly grounded in the original look of FFVII with just a touch of modern flair to give it something new. But in the end, it's still the Tifa we played with on the PSone.

I love all the redesigns and updates the AC film gave us, but if I'm playing a remake of the original FFVII... Then unless I have some unlockable costumes or whatever that I can play with on the side or whatever, I want the characters to look like they did in FFVII.

Make a new game post AC if they want to use the AC appearances for the FFVII crew or something.

Famalam, I'm sorry, AC(C) is the same (base) model that's used in this: 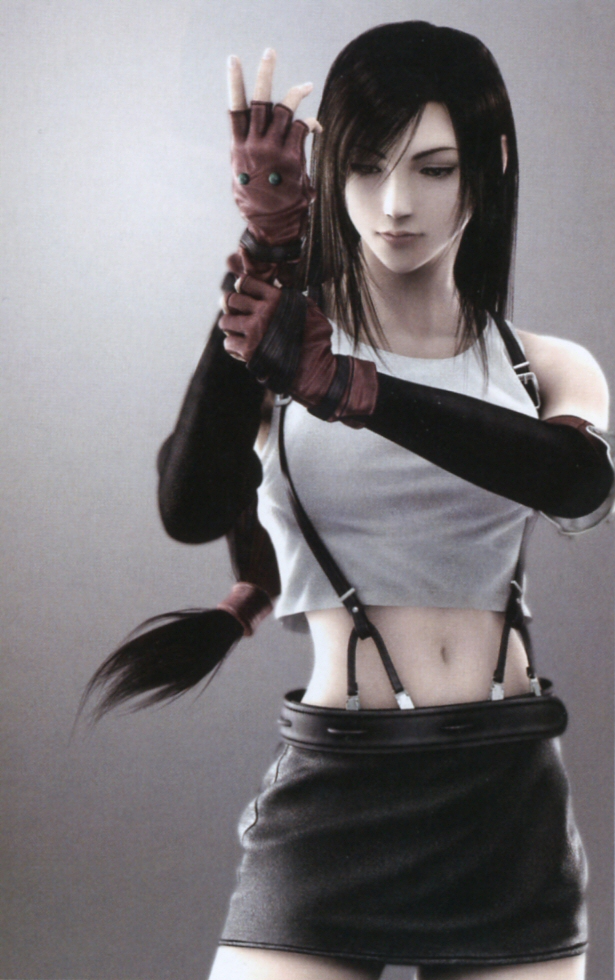 I used screenshots from AC(C) because you can clearly make out the features of her face n shit. A vote for AC(C) is also technically a vote for this model here. There is no distinction. Of course she should wear her OG look in the remake lmao.

Ahh, so its like ACC's CGI style but showcasing their FFVII appearances. From like, the 10th Anniversary gallery.

And hey, some have actually said they want their AC appearances in FFVII's remake. Literally the outfits they wore from 2 years in the future. So yeah

The 10th anniversary posters had the same models from the opening montage of ACC. I was thrilled when those renders came out, we finally got close ups of Yuffie and Cloud’s OG outfits too! (Unless you were in Tokyo and bought the blue fire soda can)

Looking again at those four shots, it’s wild how different her eyes are in three different official products. All four of them are so clearly Tifa, though, so I suppose that’s why I voted for “doesn’t matter.” As long as she’s still Blood Type B it really doesn’t

If you render it, they will come.