It most certainly is.

Maybe the fact people saw a black guy murdered by police thanks to a knee on his neck for 8 minutes changed the perspective of folks regarding race relations in America. And Hollywood is apart of America.

Cloud_S said:
They can't be outraged, publicly. They have to agree with it and step aside. What do you think would happen to their career if they didn't step down from an active role or issue an apology for a role on a show that has ended?
Click to expand...
So where is the proof of this? Because I can definitely show you public instances of actors being forced to step aside against their will and them going public on it. Please show me the evidence this really is a secret firing and they have to swallow their outrage and pretend to be woke while silently cursing their poor miserable luck of making millions and shit doing their role until now?

Cloud_S said:
I have to wonder if this doesn't eventually lead to the issue POC VAs have faced in the past and still do to this day: typecasting.
Will POC be relegated to POC characters and white VAs to white characters? Not to mention male VAs only playing male characters and the same for female VAs? Will nobody be able to play anything outside of their race and gender?

While there certainly needs to be more diversity in voice acting, and productions should look to talent outside of the usual names, will this have essentially the opposite effect of what it's attempting to correct?
Click to expand...
Well I dunno. Let's look at history.

When white people stopped portraying black people on stage and in film in the early 20th Century, did we get more diversity or less diversity? Did you see more Amos and Andy garbage or less?

When men allowed women to perform on stage as women, did we get more diversity or less? Did we get more women playwrights, or less?

When straight people left gay roles for gay actors, did we get more diversity or less? Did we gain more Will and Grace stereotypes or less?

Hmm. I guess we only need to look at reality, instead of a hypothetical.

#1,753
IT'S TIME FOR YOU TO LOOK INWARD AND START ASKING YOURSELF THE BIG QUESTIONS

Actually not a cat

#1,754
Shademp said:
IT'S TIME FOR YOU TO LOOK INWARD AND START ASKING YOURSELF THE BIG QUESTIONS
Click to expand...
Someone is answering those questions in the comment section and that scares and amuses me.

#1,755
I'm mad. Shadow of Kyoshi's UK release date seems to have been silently pushed back - the US release date is still July 21st, but according to Amazon it's August 5th in the UK. When I ordered it, it said "estimated delivery: August 27th" and I was like WHAT

So I've ordered from US Amazon. I won't get it on the 21st, but at least I'll get it within that week rather than a month and a week later.

Because I'm with free time I was making a sheet keeping track of the books released for Avatar just for fun, and looking at the data makes me wish the release had a more timely & consistent release window.

The Shadow of Kyoshi is now available on bookstore and audible. 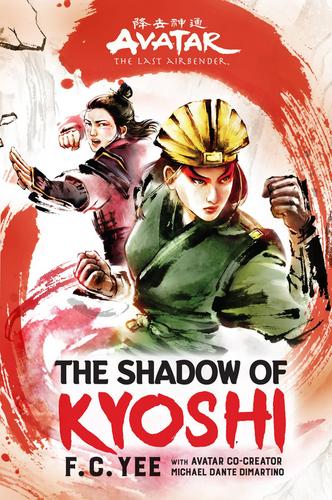 For some baffling reasons the audibook of the first novel is release 3 days after the second one...*sigh* 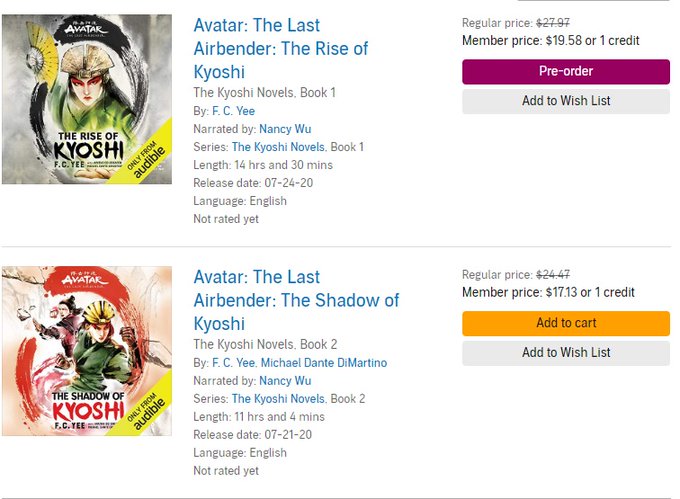 Korra is coming to Netflix US on August 14th.

#1,760
Lulcielid said:
The Shadow of Kyoshi is now available on bookstore and audible.

For some baffling reasons the audibook of the first novel is release 3 days after the second one...*sigh*

Click to expand...
Don't mind me I'm just over here waiting for my copy to ship from America of all places because of that weird later EU release date nonsense.

why hasn't it shipped yet

On one hand I'm in ecstasy Korra will get more wide exposure but, on the other hand (and if the past is any indication) the discourse™️ around it will be awful.

#1,763
If only there were some way for the version uploaded to Netflix to be better 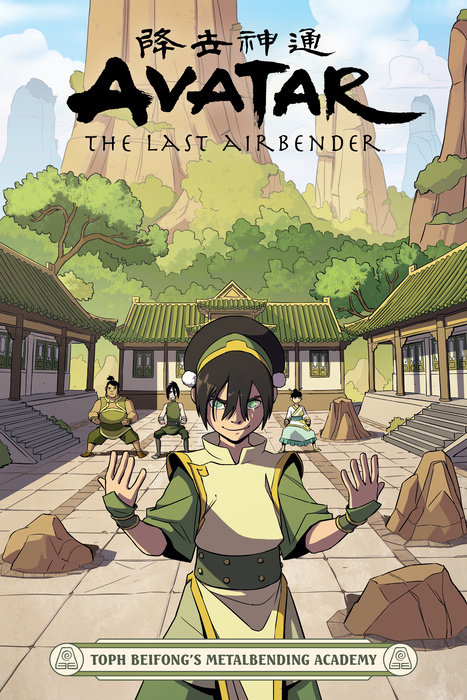 We better get news for new line-up of ATLA & Korra comics/graphic novels.
Click to expand...
Came and went with....nothing worthwhile just a reprint of an old book:

No news on how the graphic novels will continue, which is dissapointing.

#1,767
I finished reading the Kyoshi novel. It was great.


I don't know why they're not writing more? There's so much room to expand it beyond the arc that concluded in this one. I'm not sure I'm a huge fan of what they did with Yun. By the end it wasn't clear to me what the extent of the effect of the spirit he'd swallowed actually was, and overall that element of the plot felt a little bit sloppy. But it's interesting to read about a murderous avatar given the ones we've been exposed to are very PG in comparison.

Click to expand...
And we got a description of what the story is about:

Things are looking bright at the Beifong Metalbending Academy! But after all the adventures Toph’s had with Aang, Sokka, Zuko, and Katara, the whole thing feels a bit dull. Luckily, Sokka and Suki come to visit and reintroduce some familiar faces from their wandering days. And while out and about to celebrate, Toph discovers something that just might put the sparkle back in her eye…

Written by Faith Erin Hicks (The Adventures of Superhero Girl, The Nameless City) and drawn by Peter Wartman (Stonebreaker), with colors by Adele Matera and collaboration from Avatar: The Last Airbender animated series writer Tim Hedrick, this is the ultimate continuation of the hit animated series!
Click to expand...
So nothing particularly exciting.

Mike and Bryan will no longer be involved on the live action remake.

The news that's going around is that Netfix is trying to "Game of Thrones" it, where each character would be older, more violent and have passionate dramatic sexual relations with one another. And also be whiter.

Personally, I can't think of a more lame direction to take ATLA. Not every show has to be marketed as the replacement for GOT, not to mention just failing to adhere to the bare minimum of casting characters that actually adhere to the source material in a respectful way. Avatar literally has no Caucasian characters, a rare thing in Western media.

Not to mention the pushback for the original live-action ATLA movie was one of the first huge cultural pushes for proper racial casting. To ignore that in the modern day is more than tone-deaf...

So in this version, Zuko and Azula totally [okay emoji] [pointing finger emoji]

The Legend of Korra is now available on Netflix US.

looneymoon said:
So in this version, Zuko and Azula totally [okay emoji] [pointing finger emoji]
Click to expand...
I'd watch that.

First it was the not so HD image quality of ATLA, now it's frame ghosting in LOK.

#1,775
Lulcielid said:
Mike and Bryan will no longer be involved on the live action remake.