#576
Thanks for the reply, Sprites, it does clear up a few things. But about how Gumi can make their money in an alternative way, that's why I was saying drop the price of lapis and bundles straight to the floor. Do that and just about everyone will buy, and the far higher volume of sales will more than offset the lower price. And undercutting the resellers would seem to be the best way to get rid of them. If Gumi sells the lapis for less than they do, then people will go to Gumi instead of them.

I haven't had as much luck on the FFVI banner, I really want MK Terra but I've only gotten one rainbow so far (I'm on the 2nd step) and that was High Seraph Ultima. None of the free pulls have gotten me any rainbows lately, either. I haven't seen much difference in the rate up so far. And about the login 5*, again, you can only miss a day or three at most usually, or you've lost it. So it's still conditional and easier to miss than you might think. And not everyone has time to get 15000 EP for the other ticket or the bonus units to make it go faster. So one guaranteed rainbow a month that doesn't require constant logins or grinding would be nice.

Ooohh boy @Jairus. I hate to be proven wrong but oh my god the FFXV step up is awful by a long shot, looks like the generosity and change for the better lasted all of 5 seconds...so much for an improvement on summon fest banners, i'm glad ive no desire to pull on it, the on banner summon rate is awful for it.

I was interested, because Tactics, but apparently it's a reskin of another gumi game.

No thanks, I'd rather not.

#582
Trainer Red said:
I was interested, because Tactics...
Click to expand...
This is what immediately gripped me, which I'm sure it did for many others, but hearing the reviews and opinions of those who have played the JPN release game, it sounds utterly awful and the biggest gatcha / money grab so far.

A massive shame, but it seems like a hard avoid.

Ooft if folk are saying it's a worse gatcha grab than ffbe then it must be bad.

A shame, a Tactics game would work really well if done right - Fire Emblem on mobile is doing really good, even if the tactics part of that is shallow as fuck (based on what I've played so far - a fight takes five minutes at most and is one screen in size).

I'm staying away from it depite the tactics style gameplay sounding pretty cool. I hear its ridiculously grindy and not at all friendly to non spending players.

#586
Sprites said:
I'm staying away from it depite the tactics style gameplay sounding pretty cool. I hear its ridiculously grindy and not at all friendly to non spending players.
Click to expand...
Eh. It's pretty generous with the currency, from what I've played (which is very little). It seems like you pretty consistently get stacking daily login bonuses adding up to about 800 Visiore total, and a 10-pull only costs 2000, so you can probably do a 10-pull every few days when you factor in rewards for actually playing.

For the record, I've barely touched the game apart from collecting login bonuses and doing free pulls, since I didn't want to invest time into the JP version when a GL version was coming. I haven't even completed the first chapter of the story. And still I've managed to get a pretty decent assortment of UR and MR units.

The rates are pretty low, but you seem to get a lot of opportunities to pull, and they don't release anywhere near the number of units that FFBE does, so it doesn't seem that bad to me. And when it comes to materials for awakening and limit breaking, you can farm those, so at least it's not just restricted to getting dupes from banners. It also has a VIP system, but I'm pretty sure you can earn VIP points without spending, so F2P can get those benefits with a bit of time.

I've already invested a lot of time (and a little money) into FFBE, so I'm not looking to fully dive into another gacha game, but I am planning to play it the same way I play Opera Omnia, which is to do the story and collect login bonuses, and then spend my hoard when a character I like shows up on a banner. And for that, it seems like you earn a sufficient amount of currency from casual play to not have to worry about hitting any walls.

#587
The JP version just announced their FFVII Remake collaboration banner and events, with Cloud (FFVIIR) being the first Neo Vision unit, a new unit rarity that introduces new mechanics like Brave Shift, which changes a unit's animations, equipment, and abilities in battle, and Vision Cards, new types of equipment for NV units.

Also coming is Barret (FFVIIR) as a 7☆ unit, Reno as a free 7☆ unit, and Neo Vision Awakenings for Tifa and Red XIII. 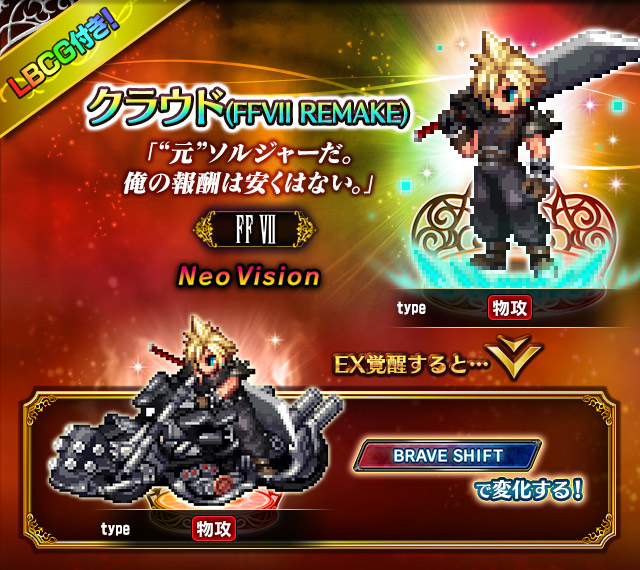 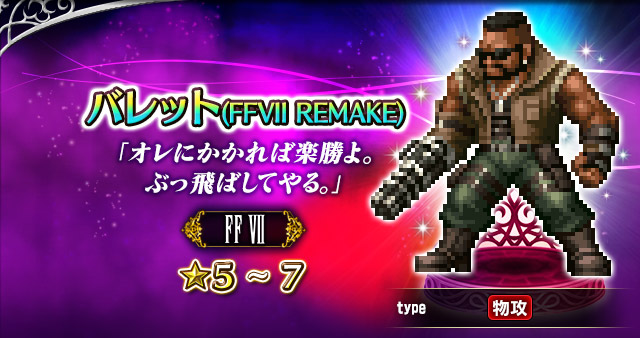 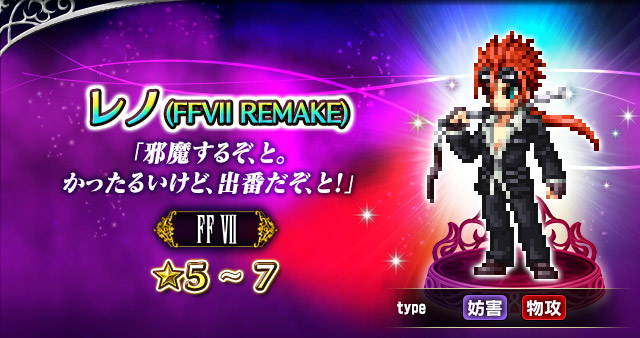 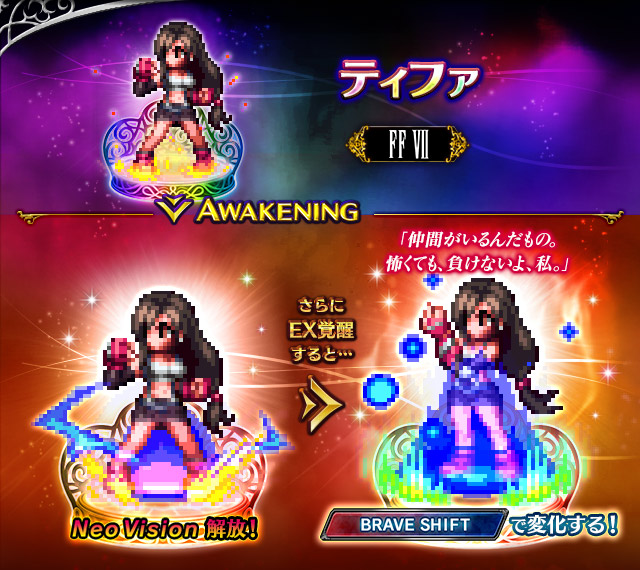 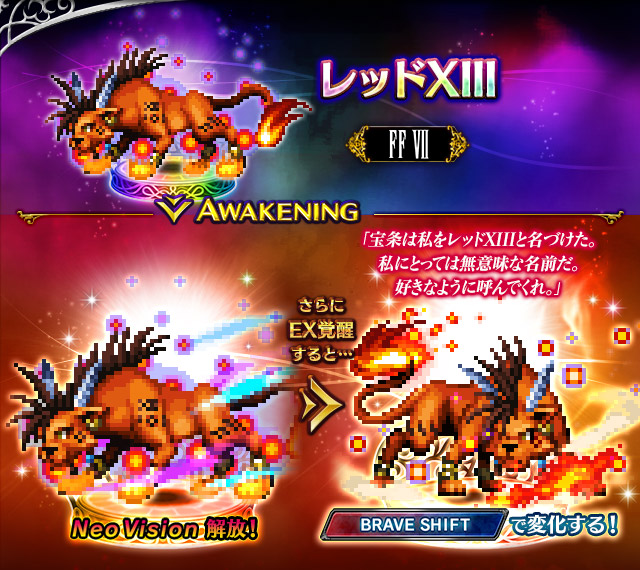 I love those designs.

And an unreleased Scorpion Sentinel VC:

As much as I used to love this game it's clear that the game designers are only concerned with making money from the active whales.

These constant revamps and shitty pull rates are not worth the amount of effort you need to put in to have a decent team.

#591
The GL version is quite fair, IMO. Especially since they've made many adjustments like removing JP's fest system and introducing the prism exchange and the recent omniprisms. Neo Vision is also generally more fair than 7☆ was (don't need duplicates), plus it comes with an overhaul of the rates, with rainbows now at 10% and golds at 50%. The GL implementation will likely be even more fair.

Speaking as a day one player who spends maybe $40 on the game anually, I have never lacked for strong units or equipment and have yet to encounter a trial that was beyond my means to complete. At this point my account is functionally a whale account. I have multiple top tier units in all roles, and plenty of STMRs.

Of course, that's also because I don't spend lapis frivolously and keep track of where the meta is going so
I know what units I want to guarantee I can get. FFBE has an amazing community with excellent resources and guides, which makes it pretty easy to do that, IMO.

I would agree with this, I think the Global version has come on leaps and bounds and we get a much more fair deal these days, won't be long til anniversary number 4.

Neo Visions looks kinda fun, itll be a while before it comes to us I think but at the moment theres no units i'm overly excited for except Vaan but thats more wanting the character than anything else so I can hold off spending Lapis for a bit.

I too have an extremely solid team, i'll be honest i stayed away from Dark Visions simply because theeload and save feature not working is an absolute nightmare right now, if theres one thing I do wish, its that when global maintenance happens the team would stop just copy/pasting the new events or features from JP with bugs included and fix them they've already fixed the load/save bug in JP so why are we waiting for it?

Well I hit lucky with the new FF7 banner 2 tickets in hello Cloud, I'm done with the banner I can use a select ticket on his prism.

Lol I'm like 3/4 way to a 20% ticket.
Had exchange shit to buy clouds prism so just want one fucking pull so I can 7 star him right off the bat.

Never been that lucky on a banner, I thought I'll use my tickets but I wasn't going to do the step up as Cloud is like AK Rain, and I don't exactly need him but I do love a good CG Limit Burst they've done such a great job with the CG limit bursts.

I knew if I pulled one Cloud i'd prism him I've been hoarding my select tickets at the moment got 32 left over right now,

Thats a change I think everyone for the ex ticket
summons wants and how have you hoarded 400 ex ticket's??????

I've probably not cashed in an standard ex ticket in like two years :-/

I realised last night I had a shit tonne of other tickets I havent bothered to use also so massively increased my team base to get a few STMRS.

Interesting that they're making damned sure everyone remembers that Advent Children & the Remnants exist.

This game fucks me over so much XD
Got my 20% 5* ticket for the ffvii event pulled it and got a 5* crystal so fairly excited it might be cloud......got a fucking dark spirit sol instead.

THATS NEARLY 200K IN LAPIS IVE USED AND STILL NO CLOUD OR TIFA!!!!

Those tickets are really shitty I never put any store in them, but I have to ask if you've spent nearly 200k Lapis, have you not done the 1 off 25k step up with the ticket at the end that you can exchange for Cloud or Tifa? Woulda saved you a whole bunch of Lapis if it was just Cloud you wanted?

I stupidly spent it on the smaller step up and just general 11k summons mainly cause I wasn't paying attention to begin with about their being 2 step up banners XD
You must log in or register to reply here.
Share: Facebook Twitter Google+ Reddit Pinterest Tumblr WhatsApp Email Link
Top Bottom