#27
Cloud_S said:
A surprise preview of "Those Who Fight":

I know it's not official, but just heard it and it's different than the usual covers/remakes/hd versions of the main theme so I had to share. Nice blend of old and new.

Hmm that’s really good, but I can’t help but feel teased. I’m really hungry for the official soundtrack. Is there a separate remix thread this kind of stuff can go in?

#31
I don't think there's a specific thread for general FF remixes (plenty for specific albums like voices of the lifestream etc.), feel free to make one!

Also I pre-ordered the vinyl

#32
rimavelle said:
I hope they will use the music tricks from FFXV, e. g., how music changes depending on how much hp boss has left or how music transforms from one track to another when entering and leaving areas. There's an awesome GDC talk about it here.
Click to expand...
Just finished watching that GDC talk. Great stuff! Thanks for sharing

Since it's a separate tool not integrated into Luminous Engine (as far as I understand) I'm sure it's possible to make it compatible with Unreal Engine 4 and use it for the FFVII Remake and I have an inkling they actually did that (unless UE4 already provides such a music transition synchronization feature).

That said, the Scorpion Sentinel battle already shows signs of different boss music phases playing at certain sections, for example the music change when the Scorpion Sentinel goes haywire (short cutscene) and the transition into the final cutscene where it destroys everything, falls into the Mako basin and explodes.

Even if the transitions still sounds a little rough, you can tell there's synchronization going on because the beats keep consistent between the phases.

#34
So here's a question: Various areas in the original reused BGM (ie. the main area of Wall Market and Rocket Town share "The Oppressed"), and while that worked, do you expect the same to be done in the remake, or will there be unique tracks this time?
Last edited: Aug 11, 2019

I definitely expect there to be loads of new arrangements. Everything about the Remake gets expanded, I'd expect the same to be true for the soundtrack. For example Bombing Mission plays when you return to Midgar at the end of disc 2. In the Remake (part 3? 4?) I'd expect it to be there but as a new arrangement different from what you'll hear in part 1. I think there's not only gonna be more original tracks but also multiple different versions of existing ones.
It's gonna be FFVII re-arranged, re-recorded, remastered and OC Remixed all at once

Tetsujin said:
It's gonna be FFVII re-arranged, re-recorded, remastered and OC Remixed all at once

You Can [Not] Remaster

I'm hearing these drops 'n' flops noises from that jokes all over to my house... kids please, turn down the volume a little bit, yea? 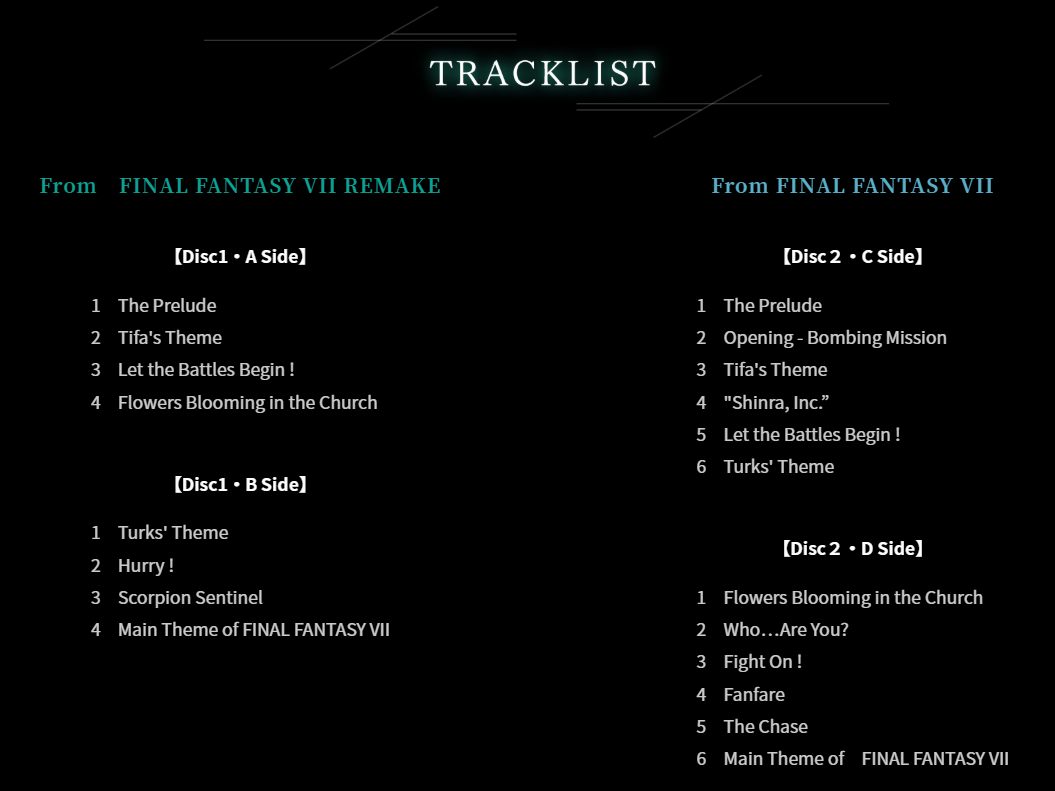 Amazing! Those Who Fight sounds so so good.

Also omg they included Aeris' death scene in a trailer for the remake soundtrack? Wow!

pxp said:
...on another note I’m getting slightly concerned that the music is all gonna be orchestral and therefore ‘monotone’. The industrial/electronic OG style is so much about what gave it a unique feel.
Click to expand...
Based on what we’ve heard so far, it’s not an unfounded concern. That said, the complete FFVII soundtrack performed by an orchestra with battle themes to accompany all the dungeon tracks, sounds like a pretty good worst-case-scenario to me. I can always turn the music off and put on the OG OST on an adjacent device if I want more of that hybrid feel. And we’re gonna have the most bumpin’ Remix thread here.

#43
I believe I said from the beginning when people fretted about the soundtrack being rock-heavy like Crisis Core that there was a far greater risk of it being overly orchestral. And I specifically cited Mako Reactor as a track that should sound industrial.

But...I'd be lying if I said this orchestral Mako Reactor and accompanying battle version didn't sound fantastic. So, we'll see. There is electric guitar in the Scorpion Sentinel boss theme (also the implication that every boss might have a uniquely arranged boss theme?) so there may yet be variety. There's also that industrial percussion note in Those Who Fight that Lex was quick to point out.

I would love to hear a few battle tracks in this kind of style. I know Uematsu likes to rock out from time to time.

#45
Naming the boss battle track "Scorpion Sentinel" leads me to believe that each major Boss gets its own Those Who Fight Further battle theme arrangement.

Vyzzuvazzadth said:
Naming the boss battle track "Scorpion Sentinel" leads me to believe that each major Boss gets its own Those Who Fight Further battle theme arrangement.
Click to expand...
Yaaaaassssss

Well the Those Who Fight Further arrangement we hear in the Scorp fight (and the TGS trailer) incorporates Bombing Mission into it, which leads me to immediately assume it’s for the bombing run specifically. The way they are playing with not only the main melodies and tracks, but small licks makes me so thrilled. After the latest reveals, I’m less sure that FF7R is going to eclipse the OG, but my god having this soundtrack is going to be everything.

Are these arrangements by Uematsu, or is he credited only because the original tracks are his? (for example, he’s credited for the pieces they perform at Distant Worlds despite not arranging any of the music)
Last edited: Sep 12, 2019

#48
pxp said:
on another note I’m getting slightly concerned that the music is all gonna be orchestral and therefore ‘monotone’. The industrial/electronic OG style is so much about what gave it a unique feel.
Click to expand...
I completely agree about the music. It's not that I dislike the usual rock/orchestral routes that arrangements of FF songs tend to take, but FFVII's soundtrack has quite a few tracks with an electronic, industrial, or jazzy feel and that kind of style is really more what I tend to think of as being emblematic of the soundtrack, as much or maybe even more so than the popular, well known songs like the main theme or Aeris' Theme (which do lend themselves to typical orchestration). Like, something that gives me major FFVII vibes is the Twin Peaks opening theme and kind of the TP soundtrack in general, really (not to go off on a tangent, but apparently someone made a Twin Peaks/FFVII playlist, so it's not just me that feels a number of the songs are similar

; given how big TP was in Japan in the '90s, I think it's possible it could've been a direct inspiration), and I hope the remake doesn't feel like the synth-type sound needs to be done away with in the interest of modernizing/updating the soundtrack or whatever, gotta have some of that stuff going on for it to really feel like FFVII, IMO.

I think it's too early to tell where they're going with the soundtrack as a whole, but it's definitely something I've been wondering about after watching the trailers.

Mr. Ite said:
Are these arrangements by Uematsu, or is he credited only because the original tracks are his? (for example, he’s credited for the pieces they perform at Distant Worlds despite not arranging any of the music)
Click to expand...
Uematsu doesn't really do complex arrangements let alone orchestral so I'd say 99% chance he didn't do any of these new versions.

Last time he arranged his own music was probably the PS1 soundtracks.