After the dub started airing on Toonami for a while, I finally decided to dive into MHA this weekend. I binge-watched all of the English episodes. I just started into the Japanese episodes in Season 2 (Chris Sabat is AMAZING as All Might in the dub, btw. He nails the performance SO closely to the original). I preemptively grabbed all of the manga, since I know I'll be binging through the manga as soon as I catch up on the anime seasons (hence my reason for making the thread here as opposed to in Entertainment).

Ever since Naruto, I haven't really had a series utterly grab me by my little shonen-anime series heart the way that this one has. OPM's about the only other series that I've really passionately fallen for since then, but I am loving every moment of this one so far.

I'm not sure what all ought to be spoiler tagged here, but hopefully I'll get caught up on the Japanese anime seasons some time this week, and dig into the manga. Anyhow, who all else likes this series, and whereabout should we spoiler tag things?

SPOILER TAG:
• Past the Dub?
• Past the Sub?
• Only the newest manga chapters?
• Nothing at all?

*bursts through wall like the Kool Aid man* I AM HERE!!!!

Okay FIRST OF ALL

I wholeheartedly agree with you that I haven't had a shonen anime capture my heart like this in AGES. To be completely honest, the last one was DBZ (I KNOW, I know, I completely missed out on Naruto and One Piece like a damn FOOL. RIP my childhood!).

At the risk of sounding overly dramatic...(EH, fuckit)...I'll say that almost every episode has made my heart swell in some way or another: whether it's a scene with All Might, or an
like toward the end of episode 43, "Drive it Home, Iron Fist!" - particularly Itsuka's internal monologue about Tetsutetsu and the strength of a 'single track mind,' shortly before his victory against Mustard during the villain ambush at their training camp...GOD, that scene made me SOAR
, or a moment between Deku and his mom (MOM OF THE YEAR, YA'LL)...I think I've teared up during this anime more than I'm ready to admit.

I will admit, though, that as far as sub vs. dub goes I'm pretty exclusively Team Sub. BUT I had NO CLUE Chris Sabat was All Might, so I might just have to make an exception. I attempted the first episode dubbed a few months ago and couldn't get past Bakugo's voice. I'll tough it out, though, if Sabat's performance is THAT good. I'll take your word for it, X

As for spoilers...I'm not really sure how it works/how to conduct myself since this is my first time but I'll follow suit with ya'll! In the meantime I'm just gonna spoiler tag everything until I'm able to follow along

While I can't find the clip, the flashback scene that babby Midoriya watches as a kid where All Might is saving the 100 people is what really surprised me the most. After diving in with the Dub, and then watching the episode in the Sub, I was really impressed how amazingly well he nailed the initial laugh and dialogue.

If I hadn't had Toonami as a gateway, I'd probably be on Team Sub like I am for all non-Toonami-started shows. I feel like I'm early enough on diving into it all at once that I love both of them quite a bit for different reasons, but Chris Sabat's DBZ heritage ties everything All Might says even further into my nostalgia and emotions for really intense fights and down-to-earth dialogue.

I have about 100 hundred Midoriya 'Watashi ga Kita!' Memes I've been collecting for weeks.

This show just has this strange endearing quality to make you feel like Deku, and by extension you, can do anything lol. When that theme song starts to swell up and you know Deku is about to go beyond his limits to get the job done it just becomes so hype. It really connects with you on a level I haven't really seen in other shows.

For me when that moment happens it's somehow more hype then Goku going Super Saiyan for the first time and they do it basically in every episode. That's pretty impressive imo.


Also definitely agree about Chris Sabat. I watch the sub primarily since I get all my episodes from Horrible Subs but when I do look up clips on youtube or something real quick and stumble upon the dub I always felt like he did a great job. There's just something about that just works about having that "piccolo"-ish voice in the role of a mentor figure 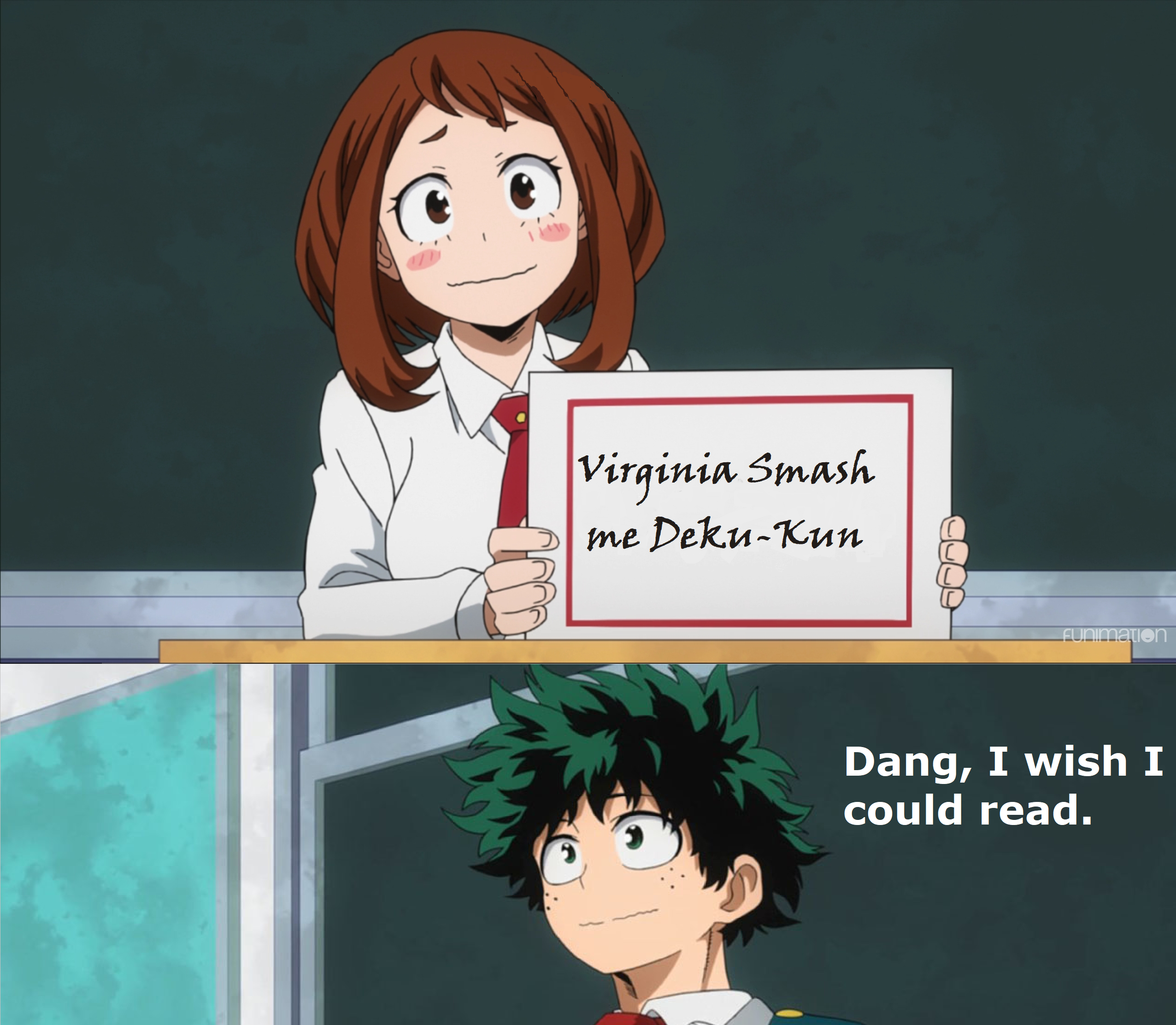 Been reading the manga since chapter 13ish way back in 2014.

I started out the same as you, I was excited about the series and Izuku as a character. As we got in deeper chapter wise along with the show coming, it made me realize that I didn't like Izuku anymore, I greatly prefer the side characters(I hate Bakugo). The hype has slowly died for me as well unless it's the adults or side characters doing something.

Sorry to hear that the hype has died slightly for you, Kuja. I can't speak to the manga at all, but the anime - at least so far - is doing a great job keeping hype levels over 9000. Obviously I can't say how long it will last, but hopefully for awhile!

Also, I'd add that Deku isn't my absolute favorite character of all time in this anime...while I'd agree that there's definitely this endearing, relatable quality about him (to Literally Who's point), I'd say that he's the one who drew me into the series but the rest of the cast got me hooked

Unpopular opinion...but Bakugo is actually growing on me A LOT LMAOOOO...among other characters hehehe

Honestly all I've seen of Togo from random clips and imagery is what got me interested enough to start watching. I know basically nothhhing about her but I love her design and demeanor.

#9
solo player sab said:
Unpopular opinion...but Bakugo is actually growing on me A LOT LMAOOOO...among other characters hehehe
Click to expand...
There's one particular thing that happens that made me like him as a character more, but he's still... rough lol

So, are we all in agreement that Froppy is best? Good to hear.

Interslicery said:
There's one particular thing that happens that made me like him as a character more, but he's still... rough lol

So, are we all in agreement that Froppy is best? Good to hear.
Click to expand...
Was it the part when
he's tied up in the League of Villain's hideout and they untie him and tell him to join their side but he denies?

Or
lmaooo
I think he's hilarious. He KILLS me every time he calls everyone extras xD

#12
solo player sab said:
Interslicery said:
There's one particular thing that happens that made me like him as a character more, but he's still... rough lol

So, are we all in agreement that Froppy is best? Good to hear.
Click to expand...
Was it the part when
he's tied up in the League of Villain's hideout and they untie him and tell him to join their side but he denies?

Or
lmaooo
I think he's hilarious. He KILLS me every time he calls everyone extras xD

I was on the Froppy train from the beginning... I love her

And
I wanna see her room!!

Made it up ta Episode 23 last night. Hopefully gonna have time to binge a bunch more this weekend.

*looks up what happens in episode 23* Oh.

The girlfriend is watching with me, and she had things what needed doing. I'd've definitely kept binging, and I'm aching to find out what's next.

Got through Episode 32 now. Hopefully capping off Season 2 this weekend, and then diving deep into S3 over the weekend.

Watched up to Episode 6 or 7? Bakugo is really getting on my tits.

#18
I felt the same. I turned around on him a good bit later on.

Joe said:
Watched up to Episode 6 or 7? Bakugo is really getting on my tits.
Click to expand...
BUT I LOVE HIM

I vaguely recall coming home sloshed after a night of debauchery and putting on the latest episode of MHA...but pretty sure I fell asleep halfway

will report back once I have a proper watch

ALL HIS INTERACTIONS WITH DEKU ARE EXACTLY THE SAME
Which is fine but like so far his whole character hasn't interacted with literally anyone else.

EVER GET THAT FEELING OF DEJA VU

But ok, to be fair, I found him really annoying at first too. It was just so much yelling

But then idk what happened!!! Probably the scene Interslicery referred to.

Still really loving everything about it.

Insofar as Bakugo is concerned, the end of Season 2 really helped me change how I felt about his character, especially the final(e).


It's an interesting version of the rivalry of the Genius Vs. Hard Effort. It's something that Naruto/Sasuke did really well, and this is a little different because the genius is the bullheaded one (There's actually a note about that in one of the manga chapters by Bakugo's design). I like this differently especially because All Might explicitly calls it out when talking to Bakugo that Deku just seems like he's accelerating faster because he started lower, so there's more momentum for him. Their final against All Might did a TON for making both of their motivations make more sense.
Hopefully I'll be up-to-date on the anime releases by this week. Then I'll put more effort into going through the manga start to finish.

Also, one of my favourite moments with Froppy is that she keeps calling Selkie "adorable" when everyone else is face-palming at his antics.

LMAO gdi @Joe catch up to us already