KING EXPLOSION MURDER for my hydroflask!!

I'm almost caught up on Season 3 now. I made it through
All Might's battle with All-For-One & the United States of Smash.
I'm hoping that I'll be able to get through the rest of it by the end of the this week. Also, I grabbed tickets to see the MHA movie on the 27th.

Random little fact: It was actually this that got me to check out MHA:

https://twitter.com/i/web/status/1012073999231275008
A friend pointed out All Might's cameo in the Steven Universe comic, and since I dig SU, and respect the writers and creators when they do little cameos and things, I figured there was a good reason for this one, and since it was currently airing on Toonami, that I'd put in some time to check it out! Also, I'm now caught up with the SimulDub (Episode 59), so I'll have more time to be focused more on plowing through the manga.

Hahahah my little cousin showed me that cameo too! It’s funny ‘cause All Might’s cameo is what made me start watching SU

I’m soooo behind on MHA! But I’m looking forward to my imminent binge session!

This is what got me into MHA. 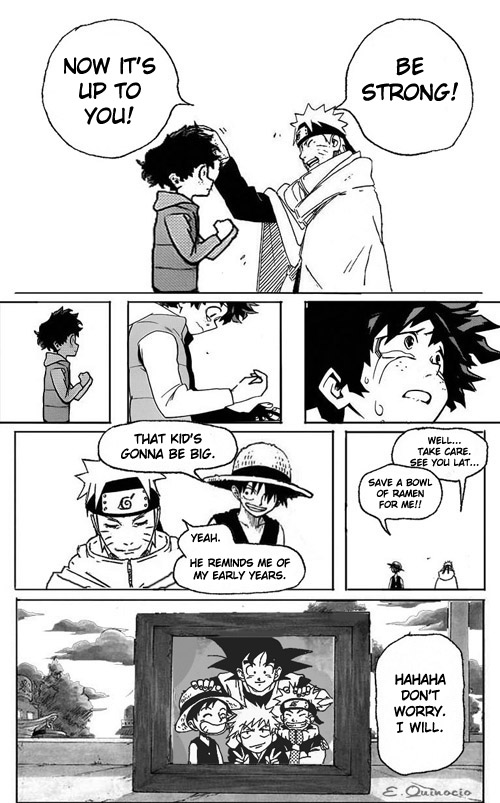 This picture was floating around the time Naruto ended (Nov, 2014) and it was around that time when MHA boomed in popularity in the manga community (by that time MHA was already 5 months in publication but not many pay attention to it until then).

^ oh god why did that make me a little emotional lmao

Because you were reminded Ichigo exists despite the entirety of the shounen anime world completely disowning him?

I'm not bitter. I was just given one job when I went to Japan and that was to bring my buddy back something from Bleach, preferably a figure. I found one god damn keychain of Hitsugaya waayyyy in the dingy, back corner of a box in a JUMP Store!!!

I have a feeling that Jump Force & the live action film will help to pull the classic Bleach characters back into the spotlight. That picture's such a great emotional look at the legacy that WSJ titles have though. One Piece is still the only one that I haven't gotten in on, because it was just monumentally large when I found out about it, and I wasn't watching anime as much, since I was just reading manga.

Where's everybody else at when it comes to the anime right now? I figure that a good policy for this thread would be to spoiler tag anything that hasn't hit the SimulDub yet (~2 weeks out from the anime), once as everyone's caught up to there.

In general I think anything older than 2-4 weeks in movies/tv/anime/games is fair game. But spoiler tags don't cost anything /shrug

The most popular policy in anime fandom is spoiler tagging anything from the manga/source not covered by the anime (sub, since that's what most fans on the internet follow), so I'd go with that.

On a different topic this thread remaind me to catch up with the manga, I'm 25 chapters behind.

Lucis Caelum said:
The most popular policy in anime fandom is spoiler tagging anything from the manga/source not covered by the anime (sub, since that's what most fans on the internet follow), so I'd go with that.
Click to expand...
That's why I suggested the anime simuldub date since it's also quite popular, and it's only 2 weeks behind the subbed anime release at the moment, and that's close enough that it seems like it should be a big deal for the thread overall.

(Also, I'm watching that instead of the sub for once, solely because I just can't get enough of Chris Sabat as All Might).

I'm 4 or 5 episodes behind on the sub. I'm good with spoiler tagging anything ~2 weeks out. I just need to get better at keeping track of where I am relative to the SimulDub.

For reference, the SimulDub just aired the special episode that sets up for the events of the film.

"YOU'VE HEARD THESE WORDS BEFORE, BUT LET ME SHOW YOU WHAT THEY REALLY MEAN!"

'She was panicked. She was saying, 'Help me.' Then, at one point, she said, 'This guy's going to kill me,'' said Joe Harris, a friend who was with Hodge, according to KNET. 'Everyone else was running away, and he was the first person to run straight to the action,' Harris said of his friend. 'He was like, 'I'm going to stop this guy regardless if I get stabbed or not.'
Click to expand...
The attack was brutal. Hodge required 200 stitches and had to undergo surgery on his right hand. It is still not yet clear as to whether he will regain the use of his right hand or fingers. 'There was a person in danger and I couldn't just let her die,' Hodge told the news station from his hospital bed. 'I'm okay, it's still lit, it's always gonna be lit and I appreciate all your concerns and hopes and prayers that have been going up. I'm gonna make it out of this okay.'
Click to expand...
Hodge's girlfriend Tori Tony said she wasn't surprised her boyfriend did his best to help the victim. 'I believe it because it's him. I believe that he took a machete to the hands for someone else,' Tony said to WTVM. 'He would do it again. He could lose an arm, and he would still do it again. And that's just Blaine.'
Click to expand...
Hodge's sister Faheemah Salahud-Din posted updates from the hospital room where Hodge is still recovering. 'It has been a long painful day, but it has also been a day of joy, laughter and resilience. Anyone who knows Blaine Hodge knows that he is always smiling, and that's exactly what he did today,' she wrote on Facebook. 'We waited at the hospital with him from around noon to midnight and he was more concerned with us being sad than he was about getting close to two hundred stitches.'
Click to expand...
'To me he was a superhero that day,' a witness to the attack said, according to ABC 23. 'I don't think anyone could take that away from him today. He's the star of the day, he helped a woman survive.'
Click to expand...
There's a GoFundMe for him to help with medical expenses, and it's got a bunch of donations from MHA fans: https://www.gofundme.com/63hm6qo

Also, Chris Sabat heard about this on Reddit and then reached out to him personally on Twitter:

LMAOOOOOOOO holy shit I wasn’t ready. I SEE YOU DEKU.

Man, this whole story has had me full of ALL OF THE EMOTIONS EVER. Thanks for making that original post and giving me something to dive into and fill my heart full of hope all day.

It was my pleasure! We all could use a little pick me up every now and then Thanks for sharing all of that follow up content!

I do hope he regains movement in his right hand though, poor guy...

I'm still totally amazed by the fact that the REALITY of a little viral post like that was SO MUCH BETTER than I'd ever have hoped.

Like, the dude makes music under the name "Static" and his new album he's putting out in two weeks even has the design of his Hero costume: 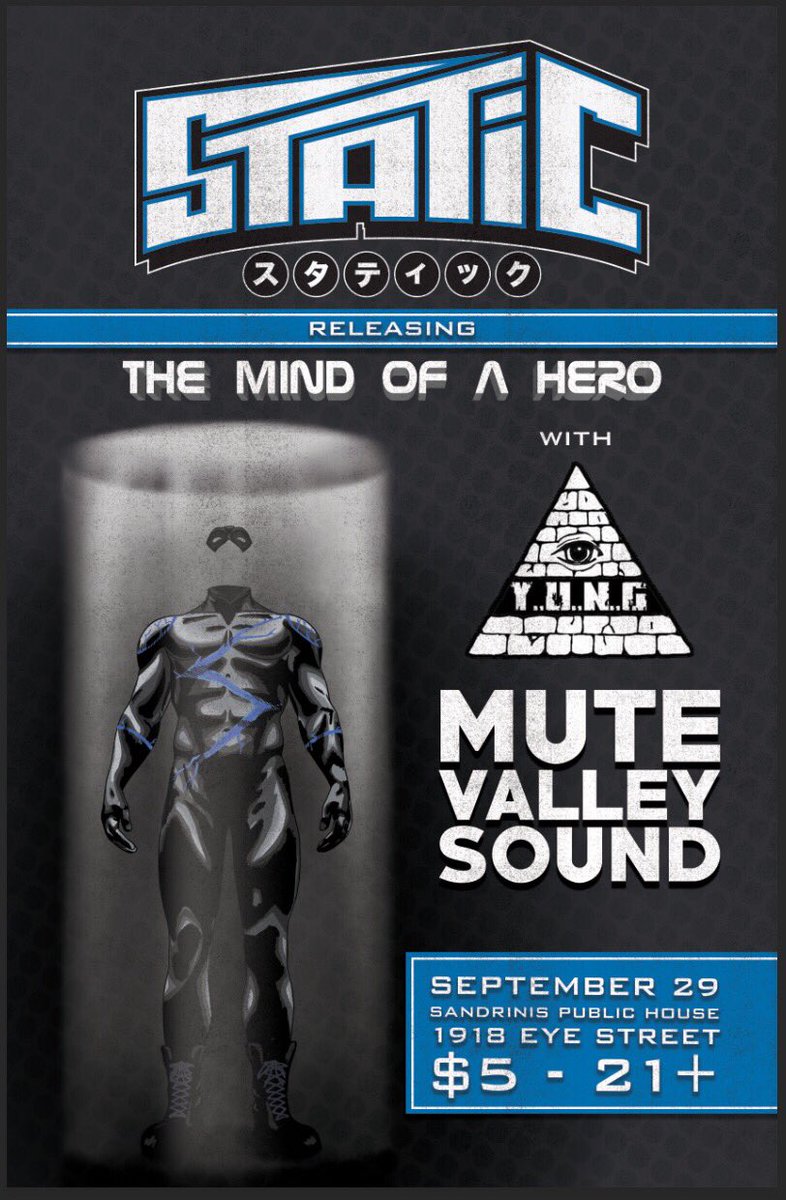 And yeah, I'm hoping that the fact that his GoFundMe passed its goal means he's able to cover the medical costs for everything, since there'll definitely be more than just initial surgery and whatnot for physical therapy and other things in the long term. 200 stitches is just crazy, and I can't imagine what it'll be like to figure out how much mobility he'll be able to regain.

Either way though, MHA already has him emotionally covered: His surgery apparently went well and he's back at home now. Did an interview about the incident in another All Might shirt. Hopefully that'll be out soon.

Also, is anybody else seeing the MHA movie when it comes out?

LMAO IRL Recovery Girl!!! Good to know he’s doing well! Seriously, what a hero. It makes me wonder how much of an influence MHA might’ve been on him when he decided to act that day. Did the anime make him more heroic, or does he like the anime because he already is? Either way, I love the parallelism here.

I’m going to see the movie on the 27th! I tried to watch it when it premiered at AnimeExpo, but con-goers were lining up the night before There was no way it was going to happen lmao
You must log in or register to reply here.
Share: Facebook Twitter Google+ Reddit Pinterest Tumblr WhatsApp Email Link
Top Bottom