https://twitter.com/i/web/status/1165842997189042176
So, the first new episode was your typical start-of-the-season recap episode, but they managed to do it in a unique and really meaningful way that I really really liked. Even just seeing the little hints of things to come in the new opening and ending credits is absolutely wrecking my emotions, especially if you look at the opening's lyrics, and I. CANNOT. WAIT.

You anime-only folks are really in for one hell of a ride this season.

Jeeze damn dude… every single episode of MHA has punched me directly in the feels, and I CANNOT GET ENOUGH OF IT. It's also worth noting that it seems like all the episodes have an aftercredit so far. I'm just SUPER full of emotions about what they've shown, and what's yet to come.

Also, for anyone reading the manga — that final panel hit like a ton of bricks that's been waiting to drop forever.

Man, the episodes have been so, SO good. Apparently the song during episode 4x13 is from the new MHA movie that came out in Japan in December (coming to the US in February). I'm really hoping that I get a chance to see it some time soon, since I don't think that we'll get those cool limited showings around where I live.


The episode had SOOOO many good segments of animation, and even a little homage moment to OPM with the fists in the sky (both of those segments were also apparently done by the same animator, too).

What were they thinking..?

Kohei Hoshikori does a lot of Kanji wordplay with all of his character's names. From the apology that both he & Jump issued on the same day of the the release of that chapter, when people started mentioning that connection online, it doesn't seem like it was ever an intentional reference. They were absolutely committed to changing it in all future chapters, and also in the current chapter when it's printed into the published volume, and not just WSJ, so I think that for what appears to have been an honest mistake, they're definitely taking all of the correct steps to completely remove it everywhere they can, and aren't attempting to downplay the severity or justify its use at all.


https://twitter.com/i/web/status/1224265644155138048
“With regard to the character of Shiga Maruta, who was revealed in issue 10 of Shonen Jump (published 2/3), it has come to our attention that many find the name to reminiscent of ‘past historical events’,” Jump’s statement reads (translated for io9 by a Japanese-speaking coworker). “In naming the character, the author and editorial department had no such intention. However, so as not to associate the work with an unrelated history, having consulted the author, it has been decided to change the name in future publication.”
Click to expand...
https://twitter.com/i/web/status/1224295830389055488
“With regard to the reveal of Shiga Maruta’s character in the latest Jump, it seems many had the impression it related to historical events,” Horikoshi’s statement reads. “That was not my intention when naming the character. We’re taking your comments and will replace the name in the future.”
Click to expand...
Translation via: https://io9.gizmodo.com/my-hero-academia-author-apologizes-for-unintentionally-1841431257


However, if you're into slightly conspiracy theory type angles: The Japanese Government is notoriously bad when it comes to acknowledging their own past war crimes, or educating people about them. I've seen some folks thinking that with as smart as Kohei Hoshikori is and as often as he loves to slide references in all over the place in his work, that he did pick this name on purpose – knowing that it was likely spark a conversation and point a spotlight at some historical atrocities that, in general, the Japanese would like people to sort of forget ever happened, and that will make younger people interested in what it's all about and go actually learn about it. Additionally, by attaching it to the name of a horrible villain who was just revealed, and by immediately changing it, that also gives him a way to eschew anyone trying to pin accountability to him having any specific sort of motivations in doing that.

Either way – I think that he responded to the situation exactly the way that you should in either scenario.

To no one's surprise, Season 5 is coming:

Also, the most recent chapter was SO intense, and I have a million feelings.

VA recording for season 5 while keeping it safe.

Jeeze damn though. These latest issues have been hella intense.

I knew that was the play.

I fucking knew that was One for All's play all a-fucking-long. That's why he gave Tomura his original quirk. One for All was in it for a new fucking body. That kid was a means to an end. He was a far more savvy and sophisticated Orochimaru.

That kid was nothing but a fucking vessel all along.

And fuck, I hope Bakugo makes it. That... Was perfect.

The way that it parallels the moment that Deku got All Might's attention trying to save Bakugo without any quirk is just SO layered. Not only does Bakugo have all of his emotions about feeling responsible for All Might losing his powers that he's still got deep down that got him to the place where he feels protective over Deku's secret, but because of that – Bakugo genuinely sees Deku as the real extension of the person he grew up admiring his whole life. That's giving him the exact same motivation that Deku had always about Bakugo – because while Deku always admired All Might, the person in the real world who he was always chasing after was Bakugo. They mean the exact same thing to each other, and the way that the motivation just finally clicks is just fucking poetry, man.

I can't overstate how much I love how he writes teenage characters. Like... when it comes to the way that they hide their struggles, break over them, and then grow up from their missteps. Iida, Kirishima, & Bakugo are just the best damn versions of that so far. He also did it brilliantly for Twice as an older character. I really love how he motivates his characters once you actually get into their heads a little bit, and the way that the story all weaves back and through itself.

I just cannot imagine what next week is gonna bring.

So nobody gonna say somethin' about Dabi, huh?

Holy shit. This was speculated for awhile but having it confirmed, especially now is pretty damn fucked up. Like... It feels especially prescient.

Heroes are heroes until their secrets get revealed. And the past doesn't die.
Last edited: Nov 8, 2020

Man, that was one HELL of a chapter. I think that it's super impressive that not only does he manage to have a hit coming in from left-field right in the middle of everything just as they're getting the upper hand with Shigaraki – but the way that the open starts with the hospital trying to cut power because of the psychological impact that it'll have on Todoroki's mom makes you REALLY remember what makes MHA so good. It builds up the characters and the side characters with real people and the way that it introduces trauma and grief isn't something that just goes away. Like with Deku's arms, they're things that stick around as reminders that surviving something DOESN'T always mean that you come out of the other side stronger.

“Ten spears go to battle, and nine shatter. Did the war forge the one that remained? No, Amaran. All the war did was identify the spear that would not break.”
Click to expand...
There is a lot of over-glorification around the "forged in the heat of battle" that you especially get when the WSJ stories examine the struggles around the "up-and-coming generation of child soldiers" which is how a lot of today's generation feels when facing the world that they're growing up in. I don't think that any of them really nail the extremes of optimism against the reality of the struggles those things bring quite on the same level as MHA.

Naruto handles that juxtaposition, but it's much more of an examination on how you use those things to fuel your ideals, and how that pushes the two opposing directions of surviving trauma (selfless vs. selfish). MHA very much takes from that, but places it in a world where you don't just get to come back from it like an idealized hero, in very much the opposite way that OPM is an examination on how even ultimate power doesn't bring personal satisfaction or happiness.

The storytelling is just so SO good, and I'm insanely glad that the anime adaptation has been so good, because I know that when the content eventually gets there, that it'll emotionally wreck me all over again.

Well Dabi nearly broke every fucking spear in the collection.

That was too badass. I'm sorry but I gotta give credit to how he fucked those heroes up. Although I felt bad for Hawks.

But man. #Metoo came for the Superheroes. That's fucking hilarious. Although Endeavour is a pretty messed up bastard. Like. Holy shit, baby making to get the perfect Quirk child is very Hojo-esque.

I love that he gets his own blindside in that last panel that puts some cracks into his particular narrative. I've got a feeling that this is gonna be the Rashomon-like "What happened between Luke & Ben" from The Last Jedi – especially as he's an enormous Star Wars fan, it feels like exactly the right time to employ a version of events that are seen from different perspectives, and makes it unclear if either side has the full story.

So the translator for the english release of MHA is leaving twitter because some fans didnt like his translations for stupid agenda(?) reasons (out of the loop with lastest MHA but seems to be for something Endevor related?). 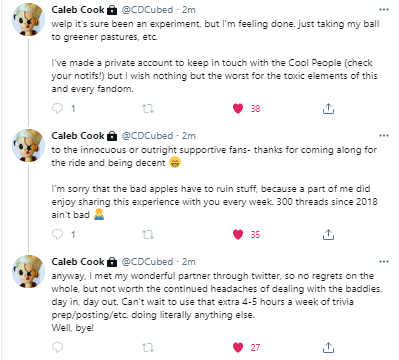 ... What the hell happened?

Why would they chase off the translator??

EDIT: I had to Google this because this sounded so wild. Apparently the fans got too damn toxic and literally hated him for translating words in ways they disagreed with.

https://www.reddit.com/r/BokuNoHeroAcademia/comments/lq1p54
.... Now that I think about it, I'm sure folks here could relate. Damn, some things never change.