screenshot caption: "while he is aware he's not suited for [...], he does also show enthusiasm for 'job [only he can do? 自分にしかできない仕事？]"


and nothing was learnt

yeah turns out Japanese isn't like riding a bike.

I forgot everything I learned years ago. Only reason I was able to do THIS much was because I knew some of the source material and could tell from the words what it wanted to say... it's only two sentences and there's more, but I kinda wanna keep at it anyway and see if it comes back to me. Transcribing it was the worst part honestly.


EDIT
and just cause I'm paranoid now, yes the word "seat" is in there. As in his seat was number 4 and it doesn't say "replica project" it just says replicas. But I thought "former seat number 4 in the organization" sounded too wordy and it was officially called the Replica Project. Just in case someone tries to tell me I left stuff out or added stuff

It is ‘formerly’ and not ‘former’, you’re right there. If it were かつてのXIII機関 or something then it’d be the former org xiii, although the game tends to use 旧XIII機関 to refer to the previous organisation iirc.

The new Org doesn't actually have numbers. Nomura thought it would be too confusing, go figure. I think it's just referring to the things people are familiar with.

So one of the stars that you encounter in the Final World says this:

I found myself here, lighter than before. Unburdened. All my pain and responsibility, gone. But something in this new ease keeps catching at the corners of my mind.
Is it okay for me to be here like this? There is a faint memory. A sound. Others may have found it grating, but it warms my heart. That crying... I have to find it. Embrace it. The sweet weight I carried. My dear, beloved burden.
Click to expand...
I don't think I gave it much thought when I was playing the game but now I realize that is a mother that died in childbirth and now her baby is the thing that has her clinging onto life. o__o
KH getting a bit dark here, yo.

I loved all those stories so much and i wouldn't even bother collecting the "Soras" because I wanted to read them. Imagine my surprise when I saw many people shocked to find they missed the Nameless Star and Naminé scenes in their playthroughs. I thought, "What? They're optional?"

Ryuman said:
I loved all those stories so much and i wouldn't even bother collecting the "Soras" because I wanted to read them. Imagine my surprise when I saw many people shocked to find they missed the Nameless Star and Naminé scenes in their playthroughs. I thought, "What? They're optional?"

Click to expand...
I could barely see em in the first place.

Just got the Ultima Keyblade last night and at lvl 99 shredded the superboss. I spammed X 98% of the time.


Ansem the Wise's apprentice, Even's nobody. Formerly number 4 in the organization, he was researching the Replica Project. **after becoming a human again, he recuperated at Radiant Garden, but disappeared not long after. He became a nobody again and is staying with the new organization XIII as an alternate. **

Regardless of being a human being or nobody, advancing his research is top priority. (caption)

BBS: Came Across Ventus in Radient Garden
KH2: Had his heart taken by Xehanort and became a nobody. He carried on with his replica plans
Days: Completed Replica Puppet No 1 (Xion)
Days: Trained Roxas who just joined Organization XIII
CoM: At Castle Oblivion, he made use of Riku replica advancing his research. He tried to take on Marluxia's scheme but was dealt with by Axel
DDD: After his revivial as a human in Radiant Garden he went missing.

I took some creative liberties here and there. Like for the caption I think literally it's "Regardless if his personality is a human or a nobody" but I thought that was super wordy.

Now this is important. For the parts that I put a ** around, someone else did that. I posted part of my translation in a Discord and they did the rest. Someone named tsubomi .

This sitar playing nobody held position number 9 in Organization XIII. Even though he perished after being defeated by Sora, he came back as a human being, but afterwards turned back into a Nobody again. He's a member of the new Organization, although a substitute (bench warmer). Because of this his motivation is more nonexistent than ever and he's not taking on any special duties.

Little lost here... is that last line that he refuses to take on any special duties?

He literally gets to sit around and do nothing, as a nonexistent member with no purpose.

....And then gets relegated as a useless benchwarmer in the decade long awaited sequel of KH2. Why? Because he's nobody.

Being Demyx is suffering.

He helps out big time in KH3, though.

He literally gets to sit around and do nothing, as a nonexistent member with no purpose.

....And then gets relegated as a useless benchwarmer in the decade long awaited sequel of KH2. Why? Because he's nobody.

Being Demyx is suffering.
Click to expand...
His Data fight isn't so bad. Wisdom+Firaga, and just hope that Goofy actually feeds you Ethers instead of standing there Hyucking to himself. 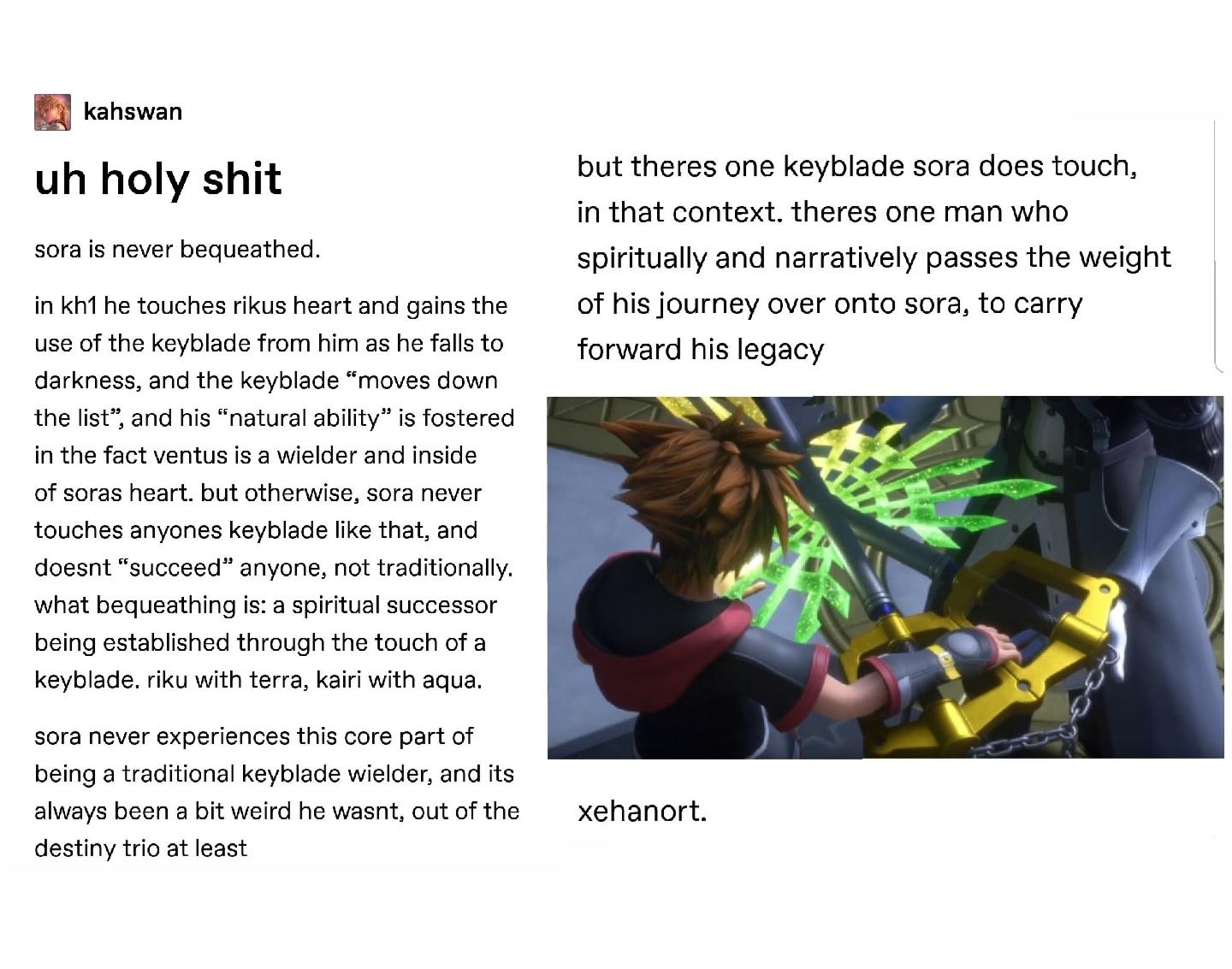 Sora will come back, forget his powers, and have to learn everything all over again

Eraqus: Bro.... *Moves his Sora piece on the chessboard* You DO realize you bequeathed the X-Blade to Sora, right?
Xehanort: ....Oh fuck you, man. Fuck. You. I HATE YOU! That's NOT what I meant to do, and you KNOW it!
Eraqus: Checkmate =DDD
Xehanort: *Grumbles* This is why I killed your goody-two-shoes ass....

Does this make Jack Sparrow a Keyblade wielder?

To think the plot of KH was made possible because a butthurt Eraqus couldn't accept defeat in a fucking chest game and had to pull Light of the past Ex Kingdom Machina from his ass, which let to Xehanort fall to the dark side

So the interview with Tetsuya Nomura from the KH3 Ultimania was translated.

It's actually rather interesting, especially for the glimpse it gives into how he decided which Disney worlds to use, and the hoops he had to jump through to get them in.

Disney and Pixar are as difficult and hard to please as others had theorized.

And Nomura was hellbent on getting Pixar in the game.

Also, the main hurdle that stops other properties hooked up to Disney, like Star Wars and Marvel, from appearing in KH, is the contractual ties those franchises have with other game companies. Apparently navigating that legal minefield along with the Disney one is just simply too much at the moment. But it makes sense. Other games with exclusivity arrangements would probably scream bloody murder at having their contract eroded by something as popular as Kingdom Hearts.

Yeah apart from the headache that all the individual negotiations would be, I prefer they stick with the Disney *brand* exclusively. That's what KH has been about from the start rather than "all things the Disney corp owns" otherwise they might as well have put in an ESPN world already

i am pretty hardline in that i never wanted even ff worlds included (characters integrated into other/original worlds is fine, but no midgar are anything like that). tron and pirates are the furthest i am willing to go. at least keep some kind of unity or cohesion beyond ‘whatever disney bought the rights to’

plus disney owns basically everything now, what a jumbled mess that’d be. oh boy here’s sora hanging out with bart simpson
T

Strangelove said:
writing a letter to nomura to personally beg him never to put marvel or star wars in kh
Click to expand...
You're a live saver if he agrees. Sadly, he probably won't get back to you or even get your letter. I wrote two letters years back asking him about making a sequel to Dirge of Cerberus-Final Fantasy VII and a CG HD remake of Before Crisis, but he never got back to me.