Dashell said:
and today's pointless fact, if you beat the game on "crit" the ending picture is the same as on beginner and the "game mode" is empty

Click to expand...
That's a bit disappointing. No offense.

Well the hope is that when they release it properly, it will have a new image

One more post on this and then I'm done. After some testing, you don't deal or take anymore damage on this "crit" mode. Although, the way people have to obtain it is with a save editor. Everyone who's tried, has saved the game on proud, and then change the parameters to be crit. Some suggest it might be different if someone started on beginner and then changed it to crit.


But at this point, it seems the only thing different is your MP and HP count. Everything else acts how it does on proud.

Oooh, this is neat. It seems most of the keyblades don't do damage though

That's interesting but see, the reason those keyblades exist in the game in such a state is because they're wielded by either "Guest" characters, or the other playable characters you temporarily control in the game.

Namely, Riku and Aqua. So yeah, of course there would be assets and stuff for these weapons since these characters have to have weapons to wield for their appearances in battle.

If anything, this only tells me that the paltry number of keyblades in this game was apparently something that was locked in for the game relatively early. Which is rather surprising. Since there don't seem to be any dummied out keyblades for Sora in the game, unfortunately.
U

#281
I'm guessing they aren't doing any damage because it's looking for something specific that Sora doesn't have. FFXIII is the same if you get someone equipped with the wrong weapon.

There could be more that we haven't seen, as this was accomplished through save editing rather than cracking the game open. KHII is 13 years old and we're still finding new things in it:


Also the Ultimania will be released on Tuesday, maybe that'll answer some questions.

can i just say

#283
Nomura’s track record with Kairi is why I have serious doubts that Stella would have been any better written/interesting than Lunafreya was/is.

At least he did okay with Aqua and Xion.

did kairi actually use her keyblade and not just hold it

when she got struck down at the end i said to myself “aw come on, really” she finally got a keyblade in kh2 then 3d ends with her walking through the door and you think, alright now she gets to fight. and then she did nothing, what a let down


i will say some nice things, when emphemera showed up i wasn’t expecting to be as excited as i was. and when all the reaction commands with usernames appear, that was cute. i liked that. since it’s meant to be an end it’s nice that they tried to bring everything up so i could see past the fact they basically shoved everyone in at the end.

but on that note, i am kind of bemused at the lack of any new, original characters. i get that it’s closing out a series and basically every character is a version of someone else. but like, no one at all? unless yozora counts as new

no radiant garden as a playable world was a let down, especially since it shows up a bunch of times in cutscenes so the model was clearly there. no square characters too beyond statues of cloud and aaron and the shop moogle. i am scratching my head at that choice.

no new 2d animated worlds, that’s a shame (unless you count the elephant from winnie the pooh) idk if they just used up all the ones they wanted in previous games or what, but seeing one with these graphics would have been nice. or even just some returning worlds, like when sora was retracing other characters’ steps and could have visited one of those worlds.

i would have liked the chance to play as more characters, even if just for one battle like with riku. they were right there, just give me that. allow me to let kairi defeat 1 (one) enemy.

also i am still digesting how the ending started playing out like a nod towards a further adventure a la kh1 and 2’s, but then that’s all apparently resolved off screen (!!!) and then sora disappears. like i guess sora found kairi but also thanos now disney owns him and that’s why he disintegrates. i am digesting this but it’s not going down well. it’s not even a potential sad ending that’s the sticking point, it’s that it just happens in such a rush

there was stuff i liked, and stuff i wasn’t satisfied with. but utada hikaru’s new tracks for the game slap, it made me emotional at the end


anyway the mysterious test subject lea and isa talk about is ava from chi/back cover and the next series is going to be traveling through video game worlds instead starting with the world ends with you and verum rex as an original world. that’s my theory, i don’t stand by it at all

also if they are going to tie so much into chi/union cross then can they at least start updating it faster than one or two scenes each month. i think it’s been 3 years now, how long are you going to keep it up

It weirds me out. Those are unique attack animations, not borrowed from elsewhere. They did that for unplayable characters that fought in the background ONCE during a very short fight?

Of course, why's that so weird? They're Guest characters. They have to perform and do stuff as characters. It's not that unusual at all.

So there you go! She got her development! At least Kairi got to use her Keyblade against her better half briefly before becoming a damsel in distress again

having read this thread through now, i want to circle back to the optional bosses. i did most of them (omega machina and that schwaltzgeist or whatever it was, vanishing boat in the caribbean) before finishing the game. then after i did the battle portals and dark inferno for the secret reports, and while it was close at times i beat dark inferno on my first attempt. and now i'm wondering what i have left to do. minigames? get sora to level 99? (i'm at 91 now) upgrade all the keyblades for the sake of it?

and now i'm thinking back to kh2fm on the ps2 and lingering will, and now i had to try several times to beat that. and then there was also sephiroth, the coliseum tournaments, the org xiii battles. you had the crown stickers and the mushroom xiii. kh2fm took kh2 and made it better and i guess now i've gotten to the point of hoping for a final mix version of a game

#292
I finished KH3 yesterday (the main game, although I do have all the chests and symbols) and I have to say I am overall very pleased with the experience.

To be honest, I do think the Disney worlds did feel a bit like filler but they were for the most part fun to play and the ending was quite good. I say "quite good" instead of excellent because the game had so much it needed to accomplish that it left little space for anything else. Still, that was played in a good way, closing all the loose ends one after the other during the finale.

Surprisingly (or not?), my favourite battle was Sora + Roxas + Xion. The music, how it was all done, it was excellent!!

That said... a bit disappointed with how the whole thing seemed a bit rushed at the very end? Big loose end for Sora and Kairi: how was all resolved off-screen? (WHAT THE ACTUAL-) And most importantly, why is Sora "vanishing"? And more than anything else, what the heck, that Yozora+TWEWY epilogue?!

Alex Strife said:
Surprisingly (or not?), my favourite battle was Sora + Roxas + Xion. The music, how it was all done, it was excellent!!
Click to expand...
You mean Sora + Sora + Sora vs Saix

To bad the fight is a total joke when you have Roxas & Xion dealing more dps than you do, trvializing most of the fights (and that's an issue plaguing most of OrgXIII boss fights.

fun fact: If you die during that fight, the tip on the death screen actually tells you to let Roxas handle the fight

Welp. Time to buckle down for the wait for Kingdom Hearts IV where Sora either has to find his way out of the abyss, or he's been damseled. Would be kinda cool to kick him out of the game for a bit and play as Riku and Kairi. 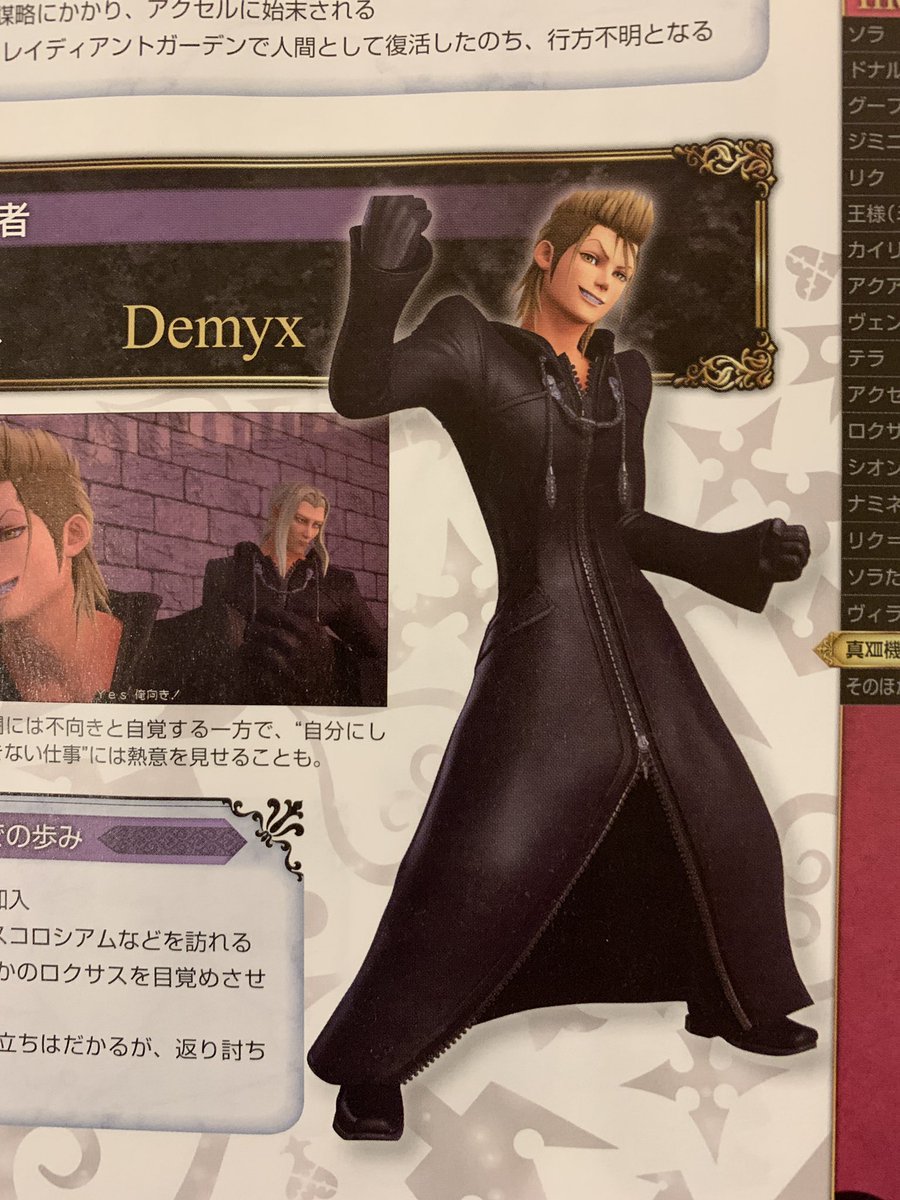 Can anyone read any of the text on this page? I want to try to find the full text if possible but my Japanese... well I forgot everything I learned years ago

"The most useless member of the New Organization, Demyx. He literally does nothing and happily embraces his role as comedic relief."