Didn't know Netflix added TFA in my region last month, yeeah. Now waiting for the other SW movies that we latinos wont get because Disney & Netflix deal is ending this year :/ 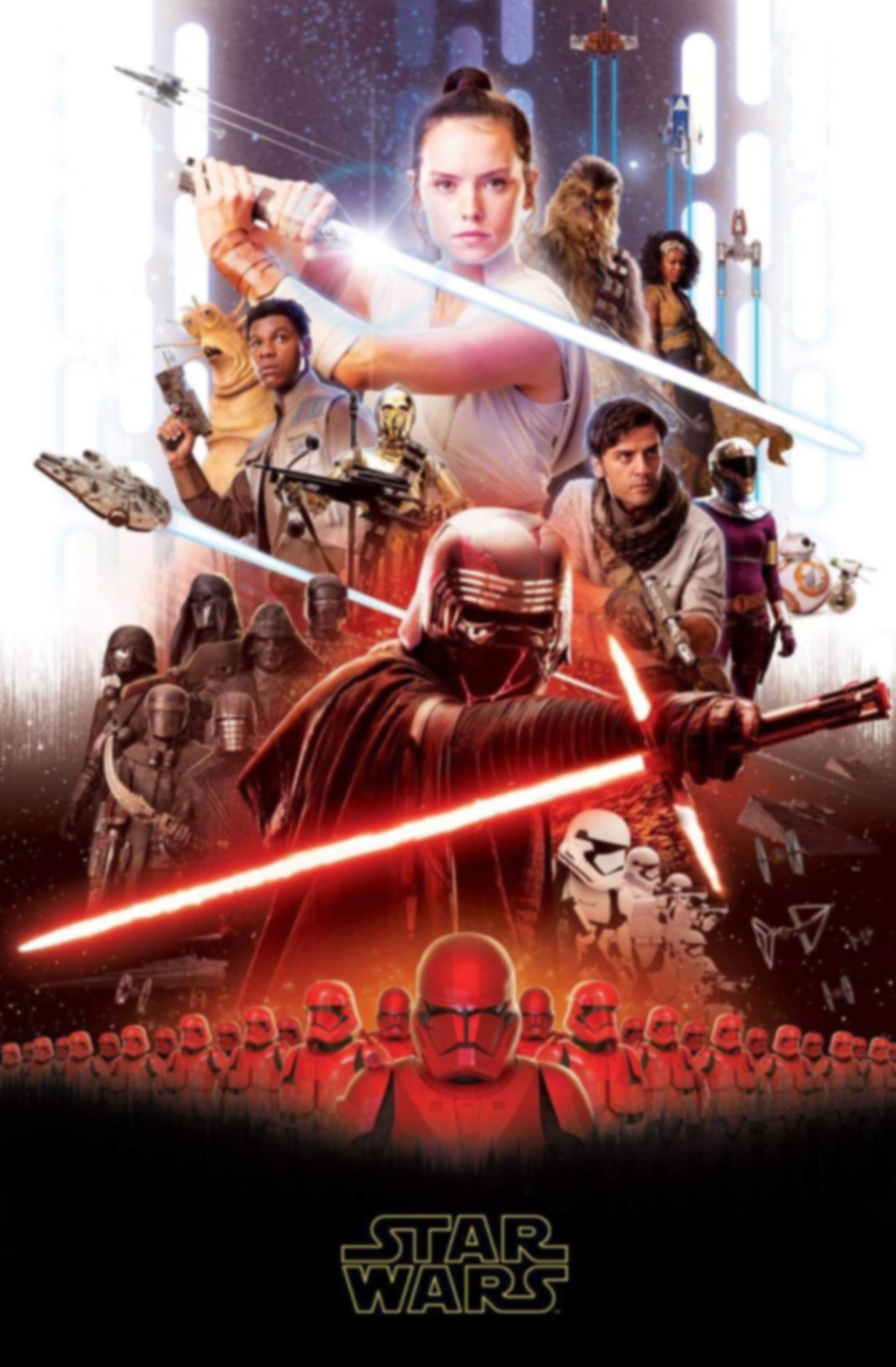 
I really like that they moved the Troopers under Supreme Leader Ren to the Black and Red motif. Star Wars has always reserved that for the Royal Guards, so it immediately gives the impression of a vastly more competent and dangerous combat military force, and lets the Stormtroopers and First Order Troopers still feel like the basic low-level military troops. Doing that also makes it so that the Knights of Ren can fill that gap in being his own personal elite guard, and also someone that they've been holding in the back, so that we'll finally be facing a dominant central Empire without the Rule of Two in place.

Also, the girl next to Chewie looks incredibly similar to Sana Starros, but given that she'd be Han & Leia's age, I wonder if it might be her kid or something, since it'd be nice to have her & Chewie together in the Falcon since Rey will likely be busy with Jedi things. Lastly, I don't know what the hell C-3P0 is doing with Chewie's bandolier and Bowcaster, but I am 100% on board for it (assuming that this is legit).

Lando isn't in the post either, which is why (assuming that the leak is legit) it isn't an official poster, but just something assembled for promo and marketing.

Click to expand...
But Hello There is from Ep IV

More seriously, it will probably be something like "Will of the Force."

Tetsujin said:
But Hello There is from Ep IV

Click to expand...
Ner, that was just a greeting. It wasn't a true HELLO THERE

The stream is still ongoing!

THE RISE OF SKYWALKER

IAN MCDIARMID SHOWED UP TO THE PANEL TO HAVE THEM RE-REOLL THE TRAILER, OH MY GODS

Also, with that title, I am beyond 1000% convinced that

Hayden Christensen is going to have a cameo in some capacity, and that has me unbelievably happy.

@Clement Rage
What stands out to you? Seeing as TLJ wasn't exactly your favorite, I'm intrigued to hear that you haven't entirely run out of all the fucks to give.

I'm in it for this wild ride, one more time.

The more and more I think about it, the more I think that this is going to be an exploration around the concept relating to the Cosmic Force that they'd been hinting about since Episode VII: The Force Awakens, and the machinations relating all the way back to Star Wars Episode I (especially with this year being the 20th anniversary of The Phantom Menace). Especially when Kathleen Kennedy talks about George referring to the story arc as "the third act of a three act structure" that's even more apparent when she mentions keeping the context of what George was working within relevant over 40 years later, by taking to heart everything that inspired him.

Especially with including Ian McDiarmid, I bet we're looking at the way that the Force itself can emerge into particular individuals (since Rey and Anakin very much have that in common). The Skywalker Saga is really all about the legacy that started with the rise of Anakin – who was really a backwater planet slave child that came out of nowhere. That legacy went through from him to Luke, and from Luke to Ben – which then awoke within Rey via an as-of-yet-unexplained-mechanism (as we've learned that she and Ben are each others' mirrors in the Force). If you're looking at answering the question of what happened to kick off "The Force Awakens" you're also answering what brought about "The Rise of Skywalker" so it's functioning as an end to its own trilogy, as well as to the previous trilogies.

Insofar as how you accomplish that: In the Vader comics, we've seen Vader explicitly looking into moments of Anakin's past as the Chosen One, which happened at Fortress Vader (where the canon VR game Vader Immortal is taking place). Additionally, in Rebels we've seen Palpatine attempting to gain control over this still-as-of-yet-unexplained Force conduit (relating to the prophesy and the Mortis gods) that could act as a bridge between events in time. Ezra even hears Rey and Kylo Ren's voices in that place. With Rey having all of the original Jedi texts, there's plenty of opportunity for there to be a way to bring this really abstract concept into the film – especially with the "No one's ever really gone" quote from Luke in the trailer and even the idea of becoming one with the Force.

I'd expect that if we see Palpatine in the flesh, it'll be utilizing those mechanics about the greater Cosmic Force that were established and used to save Ahsoka, since they're related HEAVILY to what Palpatine has been shown actively pursuing. Additionally, George's biggest contribution to the Cosmic Force are in the Motris Trilogy, which is related to the prophesy, which are again related to all of the previous things with Anakin's conception and the Mortis Gods. Although that feels pretty doubtful for a film to cover (since it's a lot to establish on its own), we also have to look at the fact that there just flat-out aren't Sith Force Ghosts (as established in those Mortis episodes of Clone Wars which is also returning), and the closest that they have are wraiths and illusions. Palpatine very much orchestrated the events all around the series, and it'd be really neat to see it finally close the book on those particular machinations that he very much seems to've set into motion and influenced, by having the new generation really hunt through the remnants of the past and finally reach the conclusion that Episode I set into motion – especially since that's what it sounds like they're looking to achieve.

How the hell our cast of characters plays into those events, and where that leaves the larger galactic conflict, I haven't the faintest damn idea – which is actually even more exciting to me. It's my best guess looking through the lens of what's in place, and the idea of IX as the final act of a trilogy that's also the final act of a three trilogy structure – but that also doesn't necessarily close that playground on that time, those characters, and their stories in the larger universe.

How did a part of the Death Star end up on any planet/moon other than Endor?

#1,998
Would be nice if something like you described happens, @X-SOLDIER . Namely, nice n' deep referencing of the whole series, but I think it'll be something far more superficial

Also bringing back Palpatine is basically Abrams saying "Why the fuck did you kill my main villain Rian, you idiot?"

@Gary Caelum – Endor is actually planet orbited by 9 different moons (one of which is the Forest Moon where the Ewoks live and where parts of RotJ take place). That's a total of 10 different locations that'd've had varying levels of fallout from the second Death Star's destruction. Just because that piece of it isn't on the Forest Moon doesn't mean that it isn't on one of the 10 spacial bodies that could be considered "Endor"

(I rather doubt that he disliked the death of Snoke, since J.J. Abrams was one of the biggest people praising Rian Johnson's script for Episode VIII).

@Ghost X – I also just remembered that the storyline in Star Wars Battlefront II is all about Palpatine's Contingency plan, that involves attempting to destroy the majority of the Empire & Rebellion in one massive final battle (as well as attempting to destroy Jakku specifically), and then gather the remnants from the Empire within the Unknown Regions in order to rebuild. It seems more and more apparent that they've been orchestrating a lot of context to Palpatine's return in all of the expanded universe canon stories that all seem to point back towards these connections as really easy, usable touch-points.

Ultimately, I think that the "answer" that Rise of the Skywalker is leading to has to also match the Episode I prophesy of, "Destroying the Sith & Bringing Balance to the Force." Assuming that Palpatine has actually leveraged a mechanism that's allowing him to circumvent his own demise (something we know is possible, and likely as we also know Sith can't live on in the Force), I'm thinking that it has to come back to Rey needing to find a way to work with Ben to overcome Palpatine (thus matching those two elements again – and them directly being Anakin's legacy).

Hell, I wouldn't be bothered if in joining forces under Anakin's legacy, that Ben & Rey eschew the title of Jedi altogether, and the unified teachings of the Force becomes being "a Skywalker" (hence further connecting the thematic title elements of "The Last Jedi" into "Rise of the Skywalker"), since technically, he's a Solo and she's a nobody, it's kind of the perfect unifying legacy.