This came to me by surprise when a friend of mine told me this earlier. I never thought Sora would ever make it into Super Smash Bros, or at least he might've make an appearance in a future game if Sakurai would ever make another one with less characters than before(though if it does happen, I hope they keep Sonic and the Pokemon Trainer, but it might not happen).

I would've thought Disney would forbid Sora from ever being in the game even though he's a half-Disney half-Final Fantasy character since he interacts with both Disney and Final Fantasy/Square Enix characters. But hey, it's about time Sora finally got in!

I thought for sure he was a goner when a Square executive or something said he wasn’t getting in. But here he is! And what a nice final pick - popular and classic.

They portrayed him in the best way possible - seeing his KH1 design represented in that way reminded me of when I was a kid longing to get the game after the Simple and Clean commercial piqued my interest, lol. (Never did end up getting it, but that commercial really did stir my imagination a lot)
His moveset is looks really smooth, too!

I can't fucking believe Sora is in Smash right now.

......I wonder if someone posted a fanfic on A03 about Mario becoming a keyblade wielder yet.

....wait. what does this mean for the KH lore if Mario can wield a keyblade? Can Link also wield the keyblade too?

....wait. what does this mean for the KH lore if Mario can wield a keyblade? Can Link also wield the keyblade too?

WAIT. DOES THIS MEAN WE MIGHT GET A SORA AMIIBO????????????
Click to expand...
Mario and Link wielding keyblades? The former, maybe if Square Enix, Disney and Nintendo go into an agreement to make the Mario franchise part of the Kingdom Hearts franchise, but while even though it's unlikely for both, I think Sonic has a better chance in maybe potentially getting a Keyblade since Cloud's a square enix character and Sonic made cameo appearances in the Disney films Wreck it Ralph before Paramount made the live-action movie with the sequel coming out next year, and now since Sora's in Smash, this makes it the third time Sonic is somewhat in a cross over with Disney.

But the one who now can wield the Keyblade is Kirby due to his coping abilities!

Sora's own successor of the Keyblade is the Hero of Dreamland, the pink puff ball; Keyblade Master Kirby, lol.

#280
Tashasaurous said:
But the one who now can wield the Keyblade is Kirby due to his coping abilities!

Sora's own successor of the Keyblade is the Hero of Dreamland, the pink puff ball; Keyblade Master Kirby, lol.
Click to expand...
As it should be, amen.

Edit: This led me to look up "Kirbyroth" on google... Then this came up

(spoiler warning if by some chance you've never played FF7) 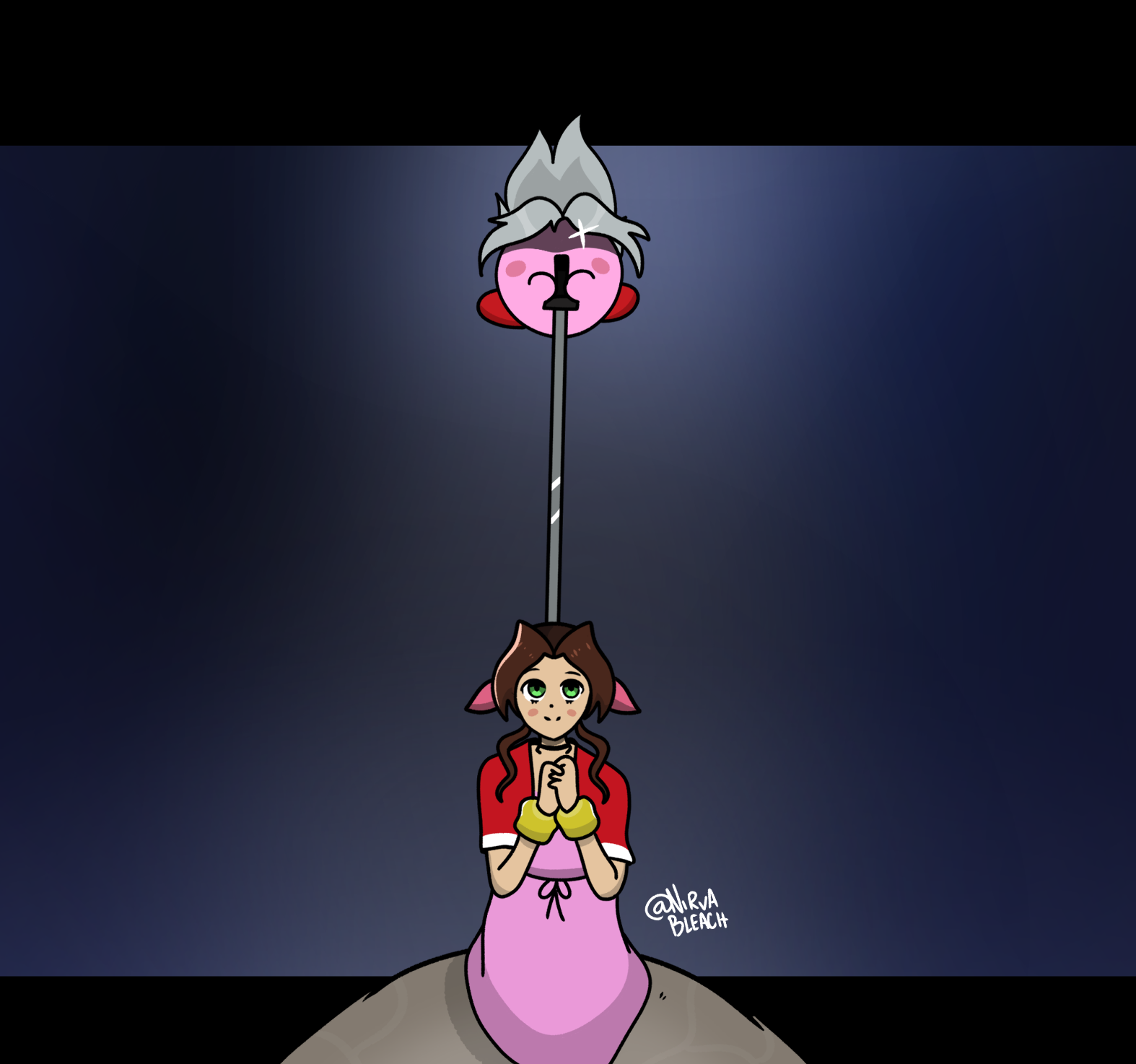 Kirby actually doesn't get a keyblade when he eats Sora, just a vague light silhouette of one.

Tashasaurous said:
But the one who now can wield the Keyblade is Kirby due to his coping abilities!
Click to expand...
Kirby can't hold the keyblade because the keyblade has a Mickey logo on it and Kirby isn't a Disney property

The fact that it could even appear in the promo itself was probably a tiny tiny tiny loophole (which was well taken advantage of, if really the case!) in which if the keyblade (and the charm) was defined as part of Sora's overall design and encompassed in as the rights to Sora the Disney character, and not defined as a standalone logo or motif.

Cloud Strife(from FFVII): During the optional fight against Sephiroth in Kingdom Hearts 2(2005/2006), he disappears.