This is fucking exactly what I needed for this hangover day

#152
So there's a theory out there that Buffy/Faith is a possible endgame coupling for the comics.

Honestly? I can see it 0_0. I know that's kinda nuts sounding but considering the enormous subtext between the two of them and the fact that Buffy had a same sex relationship in the comics, I could see it happening.

For more on the lesbian subtext, watch the latest from TPN:

like also just want to say I am grossly disheartened by the lack of discussion in this thread re: his videos, because every single one of them is an amazing joy to watch and you're all horrible people because I know you're just sitting there like "oh that's nice Lex, I'll throw him a thanks so he thinks I watched it"

I mean, there's no subtext. It's just text

I haven't read any of the comics tbh although I've been meaning to get around to that...eventually.

Edit: well I did read Angel After the Fall but none of the Buffy ones.

#154
I really want to read the Angel comics set after that series because they're "Angel & Faith" and they're supposed to be pretty brilliant.

Tbh the whole comic order confuses me. I know that After the Fall was another company so it's now technically only canon as long as the newer ones don't contradict it. Dark Horse something something or something. I'm not a comic book person.

But yeah I'd like to get my hands on hard copies of the collection, is it right that most of them get made into a massive book/ graphic novel type thing at some point? So Buffy season 8 is two books or some shit? I should research. I've read Buffy season 8 and that's it, it was pretty interesting. Got too weird for me. I'm told season 9 was a lot better though.

EDIT: It'd appear there are "library editions" which are essentially hardcover collections of some issues (weird) and they're missing some of the one-shots?

#156
Watched this again. Got mad again (3:57 onward). I even downloaded the video incase it ever goes down, because this needs to be preserved forever.

#157
I've read so much about this situation over the years, but have never seen this video. I honestly got choked up hearing her discuss it, as Buffy / Angel means a lot to me and I hated what happened to Cordelia. I was always on the fence, in that I thought both parties were probably to blame for the situation, but this does make me really angry and sad.

#158
If you go back to page 2 or 4 or something, we had a big discussion about that situation in here XD. I've been feeling nihilistic the past week or so, so I've been randomly watching episodes from season 4 of Angel.

I'm friends with this guy called Will Phoenix on FB (I met him while working at a Comic Con stall here in Glasgow a couple of years ago, his stall was next to ours). He creates hardback covers for notebooks out of metal (and calls it copper art). Well here's his latest:

Anthony Stewart Head bought one and said he was "blown away"! So awesome <3

Check out the dude's FB.

#160
My favourite YouTuber gave a talk at Denver Comic Con! I'm so happy for him <3

#162
"If nothing we do matters, then all that matters is what we do"

That episode of Angel aired 16 years ago today.

Former Whedonverse producer Gail Berman is open to more Buffy if Joss Whedon decides to make it (a comment just in time for the show&#8217;s 20th anniversary this week).

I would be really happy to get the [revival series] call from Joss.I have my own thoughts of what it would look like, but my own thoughts are not important. It would be what he thought. I will always let everyone know this is all about Joss. I did everything I knew on how to to be supportive of that, but the stories, the direction, the writing and the tale telling, that&#8217;s all Joss.
Click to expand...
http://io9.gizmodo.com/the-one-rumor-about-deadpool-2-we-desperately-wished-wa-1793102366

I'd love to see Buffy as a mother being called back into the frey. Soccer mom by day, kick ass slayer by night.

#165
Tetsujin said:
Buffy turns 20: Joss Whedon looks back
Click to expand...
This made me lol:

I feel that I wrote the perfect ending for the show and wrapped everything up exactly the way it should be. We wanted to hit the final chord of a beautiful symphony. That, unfortunately, was in season five. So with season seven, I sort of had to shut the door on the idea that this was the last episode a little bit, because the weight of that was crushing me. I was terrified. But I so very specifically knew what I needed to say and what I needed to have happen. That was all in there. But when you get into actually writing it, you’re just, like, “Oh, God, it’s not good enough.” Then you’re, like, “Dude, you’ve got to chill,” because it’s unbearable pressure. You want the last episode to mean something that no other episode has. And it is large. It was so hard to shoot. So we went out with a bang and hopefully an emotional one.
Click to expand...

Apparently Buffyverse is getting a book series! Lex, have you hear about this yet?

Has anyone seen this yet?

The cast reunited for a photoshoot and interviews: 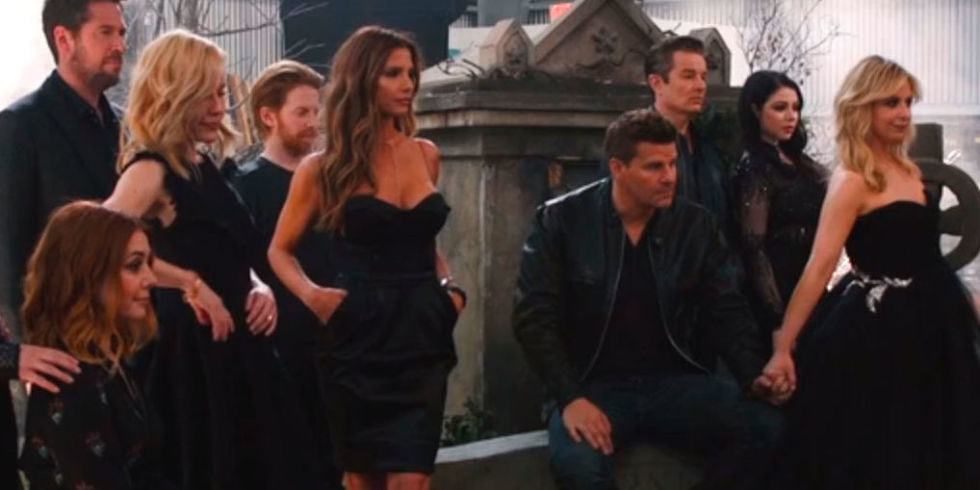 I actually watched that video today, I saw it on Facebook. Can't wait until we get the magazine in at work.

#169
It's so cool seeing the gang back together like that.

Opinion re: the other thread


I don't think Joss' writing had ever been as strong or creative as it was on Buffy.

It really saddens me that he's a gigantic goddamn asshole given the central feminist themes, but overall I will always love the series for the inspiration it gave me in the time it was made.

That being said, I don't feel pressed to support his work outside Buffy and Angel. I liked the first Avengers when it came out, but no longer care about super hero franchise movies. The Firefly grieving really needs to die at this point. Cabin in the Woods loses most of its punch on a second view. Dr Horrible is okay, but even when I first watched it I felt like it was such an obvious outlet for Joss' super gross nice guy syndrome. Ick....

Boy though, do I LOVE Buffy. As much as I hate reboots, I would gladly welcome a modernized retelling of Buffy headed by someone who isn't Joss... Or any dude for that matter. I feel like of there was ever an appropriate time for it, it's now.

#171
While I'm pretty sketchy on the idea of Buffy not involving Joss, I don't want the Kuzui's anywhere near it. They were notorious among all staff for being complete assholes, didn't go near the show - and unfortunately, they own the rights to Buffy.

I'm actually reading a book right now that's kind of a mish-mash of quotes from various writers and actors from the Buffyverse and there are a few that mention the Kuzui's. Fran Kuzui herself has a quote in the book, and it's really bizarre because it's this paragraph where she's like "I saw what Joss had and I really wanted Buffy to be this and I think we achieved that" etc and it's incredibly out of place because it's surrounded by quotes from every other person that says "the Kuzui's had zero involvement with anything other than meddling with the movie script."

There's even a bit where one of the showrunners tells the story of how it was the done thing then to call executive producers to let them know they were about to start filming another episode, and they used to call the Kuzui's as a joke because when they said "we're starting" the Kuzui's used to respond with "who is this?"

I know what you mean about rebooting without Joss being weird. So much of the character from the show comes from his own way of writing dialogue and banter, and I wouldn't like to see a new series that doesn't hit the nose on that

I just don't know if he's really the best person to revisit this story anymore...

I think if they did do a Buffy reboot, it would be cool to see something that wasn't just a rehash of the their time at Sunnyvale high (though it would make the most sense to start there). I'd really like if they incorporated The Fray comic into it, but that'd be pretty unlikely.

I just realized that modern Buffy would have an iPhone and an instagram account and I suddenly feel really weird.

Joss Whedon's coming back to write the Buffy comic.

#175
Thought I'd put this here until further news, first pics and shit come out, but this is exciting nonetheless.

Joss Whedon is working with HBO on a new show The Never which: