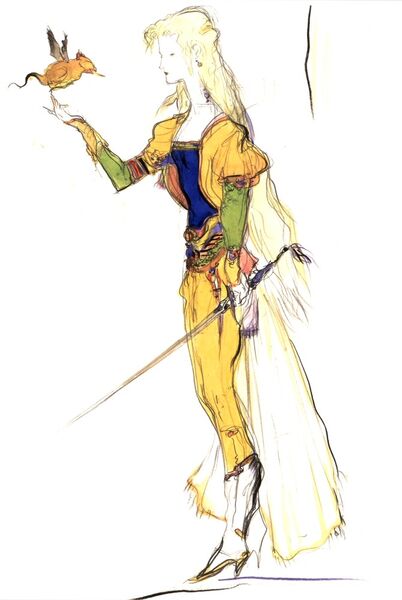 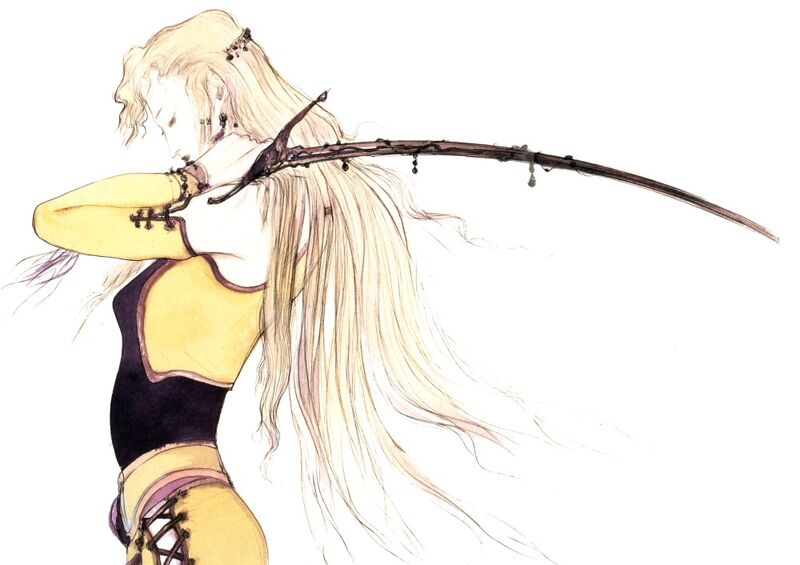 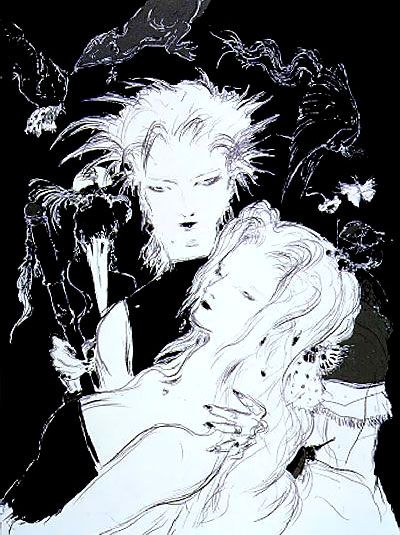 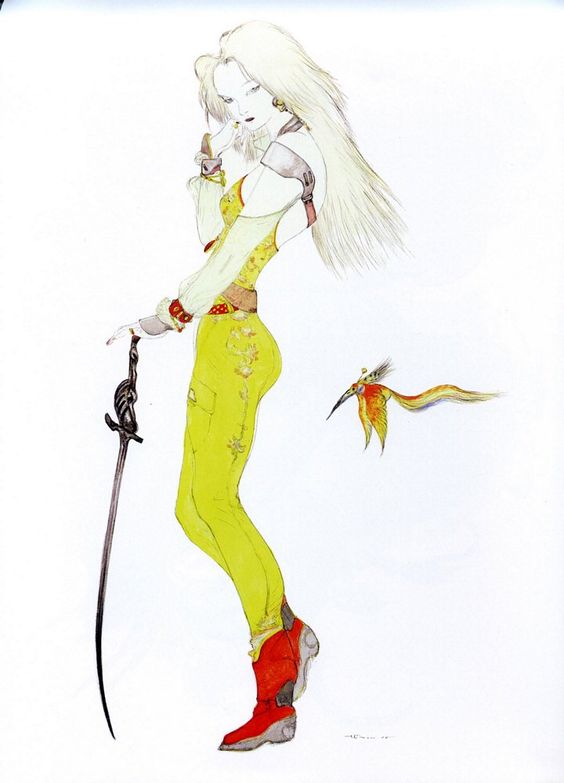 Like... I don't think I'm taking crazy pills here. Those three characters look very similar, despite not being similar at all. Garnet literally looks like she's a missing Rune Knight for the Gestahlian Empire. LOL why does she even have a sword?
Click to expand... I think I fixed it, I'm not sure why it freaked out.

...Maybe it was the forum's duplicate image spam protection.

Makoeyes987 said:
No, that's my point. They don't actually look like each other, but if you look at their Amano artwork renditions, they've been drawn so similarly that other than their clothes, you'd think they were near identical or feature such a strong resemblance to each other, despite that not being the case at all. Amano's artworks for some reason makes a lot of his women characters pale, white/blond haired, and hour-glass shaped. Garnet's strikes me as the most strange example of this, she looks like she could be Celes' sister. And it doesn't have to be the case because Amano's other designs for the IX characters are extremely distinct and unique. I dunno why Garnet got whacked with the Celes stick but... That's how it turned out

And on another note, Aerith's Amano artwork sorta resembles Celes too....

Like... I don't think I'm taking crazy pills here. Those three characters look very similar, despite not being similar at all. Garnet literally looks like she's a missing Rune Knight for the Gestahlian Empire. LOL why does she even have a sword?
Click to expand...
You've got a point there. I think with the FF girls, for the most part, he takes his standard feminine form and matches the hair and clothing. With a few exceptions, it always seems that the art he does for FF is much more sketch-like and rushed (though still expressive) compared to his art for art's sake pieces. (like this or this) Has anyone else noticed that? I wonder if they put him on a really short-notice time crunch or something.

With that said, I don't think Nomura is above reusing the same "base" character form, as that's a common critique of his work as well. Is it that unusual for Japanese pop artists in general, though? They usually have a few character archetypes and reuse them as needed - I'm thinking of Akira Toriyama or Hirohiko Araki in particular, at least. Nomura and Amano are both like that, too. In those sketches it's particularly evident to a fault, however.

Prism said:
I wonder if they put him on a really short-notice time crunch or something.
Click to expand...
Considering how much art he does per game, I'd bet they just wouldn't want to pay him for a ton of full pieces. His stuff surely isn't cheap.

Outside of oh... maybe FFVII, Normua's character designs vary a lot. If not in the character's build, than in what they wear and how. You can instantly tell both who all of Nomura's characters are and what game they are most likely from just by looking at them. For all the people complain about Nomura's fashion sense at times, all his characters have unique silhouettes and often color schemes. It's no wonder people look to his character designs a lot more than Armano's; Nomura's designs work way better for telling players a lot about a character at a glance than Armano's designs do.

It’s a not uncommon opinion in the larger community. During the Nomura age of FF, people say “Oh, another final fantasy character with the same face again?” while ignoring the differences all the time. Remember the minor uproar some people on the web got when people said Noctis and Cloud had the “same face?” (They basically don’t, but still)
...Or when people say that Rinoa is too close in her face and hair to Tifa. (also unfair for obvious reasons)
...Or when they say that Lightning is a worse, copied version of Cloud.

Fair or not, the idea is that Nomura isn’t above reusing character archetypes is held by some of the public at large.
Even in VII, I’d argue characters are super diverse in design style. Each character is instantly identifiable, from Barret’s brawn and guns to Sephy’s flowing hair and long sword. I also agree with you that his style evolution over time has kept each FF cast from feeling similar, something that is pretty greatly under-appreciated - even among the similarities that carry over (spiky-haired swordsmen and such)

No reason to drag Amano’s art down to lift up Nomura though, both are really awesome.

#133
I agree that I like both for what they do, and that Nomura's is simply better for translation into video games, while Amano captures more of a mood. (I've never seen Nomura do a landscape, for instance.) But I have always found the Nomura-hater's position curious when they talk about his designs all looking the same, because Amano has that issue in a far more pronounced manner.

I also frequently mention how much I LOVE Nomura's monster design, and wish he would do it more often. (He's responsible for the in-game work for the Kefka tower thing, and Neo Exdeath, and they brought him back to do Enuo for V Advance which looked great. And Bizarro/Safer Sephiroth.)
I would love a game where they got someone new to do the character design, but had Nomura do the monsters.
Last edited: Sep 15, 2020

#134
I like Amano's work a lot and I think he's a great artist, but, while I don't think it's impossible to translate his designs into 3D, I think other character designers' work is probably more suited to it. Amano started out in animation/character design (at Tatsunoko, I think), but he's really more of a fine artist/illustrator now, I think, and the appeal of his work is his style as a whole, not characters with super distinctive features, which is perhaps why they bring him on for logos and illustrations nowadays, rather than designing main casts of characters - plus his prices are probably extremely high

. Character designers do reuse certain character "types", but even so I don't think it's unfair to say Nomura is more varied than Amano in that respect.

To translate Amano's paintings something like cel-shading has to be used (think like a more advanced and realistic Okami), or else it would be hard to make it work.

#136
OK I've been stalking that thread on Era and I'm starting to feel hyped, there are too many journalists reacting in a coy way lmao. I need to go to work. One more sleep and then we'll know for sure.

LicoriceAllsorts said:
I'm in the minority in that Amano's art does nothing for me. I don't like it at all, and so wouldn't enjoy immersing myself in a world done in that style.
Click to expand...
For me Amano is a great artist, but his style doesn't translate very well into 3D. There's this movie "Vampire Hunter D" about a series of novellas he illustrated. It's like a far-future world of FFVI and it's beautiful, but I can't picture it on 3d, no matter what.

Amano has always been a concept/cover artist and, when 3D came with VII, Nomura took the reigns because his manga style could be translated betterinto 3D. Now we have Roberto Ferrari, for those worried about the same-face syndrome. I'm not worried in that front.


LicoriceAllsorts said:
Nobody in Ghost of Tsushima is what I'd call ugly. They're just... like real people.
Click to expand...
Yeah, but hte point with most videogames (especialy Japanese) is that, much like Hollywood, either you look like a supermodel, or you are considered fugly.

I'm in the same boat with not needing eye candy. Hell, I used to play Neverwinter Nights, where characters were a bunch of polygons and a portrait next to their text, and you had a hell of a cast there. Give me a well writen character with good voice acting over any design.

Sexiness is hugely subjective. I know for a fact people do find the main character in Ghost of Tsushima hot, that's not new at all. Wolf from Sekiro, is another example. People find Joel in TLOU sexy, and even Abby, despite the gamer controversy saying otherwise. And people find Barret and Wedge sexy based on how they look and being the opposite end of the spectrum of Cloud, Sephiroth and Rufus.

Character design doesn't necessarily need to be done specifically to make a character sexy. The design simply needs to capture an aspect or appearance of humanity authentically, which then resonates with the audience. Attraction comes from many aspects, even the aspects that are seen as antithetical to conventional standards. Hence characters like Wedge having a surprising amount of fanart and shit. If the designs are well done, even when not "sexy," it will draw in a sizable portion of fandom. And then you'll get authors/creators who get confused because they'll go, "I really didn't see them getting this much attention, it wasn't my intention to make them attractive at all..."

Yoko Taro's Caim from Drakengard immediately comes to mind as an example of this. So, sexiness is hugely subjective and may land inexplicably, because all it takes is capturing a character and their design in a talented, sophisticated way. I think a lot of the time, that is the case. People even find Kefka sexy, and I doubt it was any conscious effort to make him that way. There are just those who find madness, danger and a sick sense of humor hot, and it took no effort to create that outcome creatively.

IT POPPED UP AGAIN!!

Guess this is it...ladies and gentlemen and others, this is really something

I'm impressed that Square is going to simultaneously bring a new Final Fantasy to life while remaking an old one. That's ambitious as fuck, and gives something for everybody. This definitely ain't Yoichi Wada's Square, and thank God.

#144
They got that Project Athia thing as well, eh.

They've really got all of their studios hard at work, that's for sure.

One thing that's on my mind before this possible reveal is that...all of our ideas of what XVI could be, right now, exist freely without any preconceived notions. We have no idea, and are just going off of our pure imagination. It's interesting to hold onto that before we see the real thing and know what it actually is, then all of our hopes will be based on the real thing as a frame of reference. You know what I mean?

That is, if it actually does get revealed...

IT POPPED UP AGAIN!!

HOLY FUCKING SHIT
Click to expand...
I don't believe this is related. Their naming conventions always use the roman numerals, not the numbers.

That's a very good point, but even Square themselves have been slightly inconsistent with that. The official hashtag for FFVII-R is #FF7R.

And, yet, the handle is roman numerals.

Still, it's easy to fake these accounts. Some people are even thorough enough to use the company's actual social media management emails to make it more convincing.
U

#148
Just announced. Can't say if there's a release date as firefox chose that moment to freeze. But it's a classical setting.

I'm kinda ~whelmed~ tbh but the fact that there's blood is cool.