I think we need to remove the question mark from the title.

#78
Confirmed which vampire is Carmilla

#80
Usually the "wallpapers" posted on the official Twitter account don't do much for me, but this one... It makes me FEEL things.

#81
In the words of the facebook account of a William Elliott: "Hell yeah I got you an EXLCUSIVE FIRST LOOK at the first fight scene from Castlevania Season 2. " In his post there was embedded the aforementioned scene, albeit with much of the width cropped out.

Sharing facebook links is a terrible hazzle so I just downloaded the video and uploaded it elsewhere. Download link here, if you wish to spoil yourselves (like little me


I VERY MUCH ENJOY WHAT I SAW! <3 <3 <3
Btw I don't actually know for certain that it is from episode one of the new season, I simply assumed that when writing the file name.

Surprised at how high Hector gets rated on the "Evilness" scale! Also, the description says that Hector uses his hammer to perform necromancy. Interesting.

#84
The official Twitter channel changes from Sypha Belnades to Vlad Dracula Tepes and includes a neat clip from season 2.

My instant thought when seeing this post was the "I AM HERE" meme from Hero Academia. XD 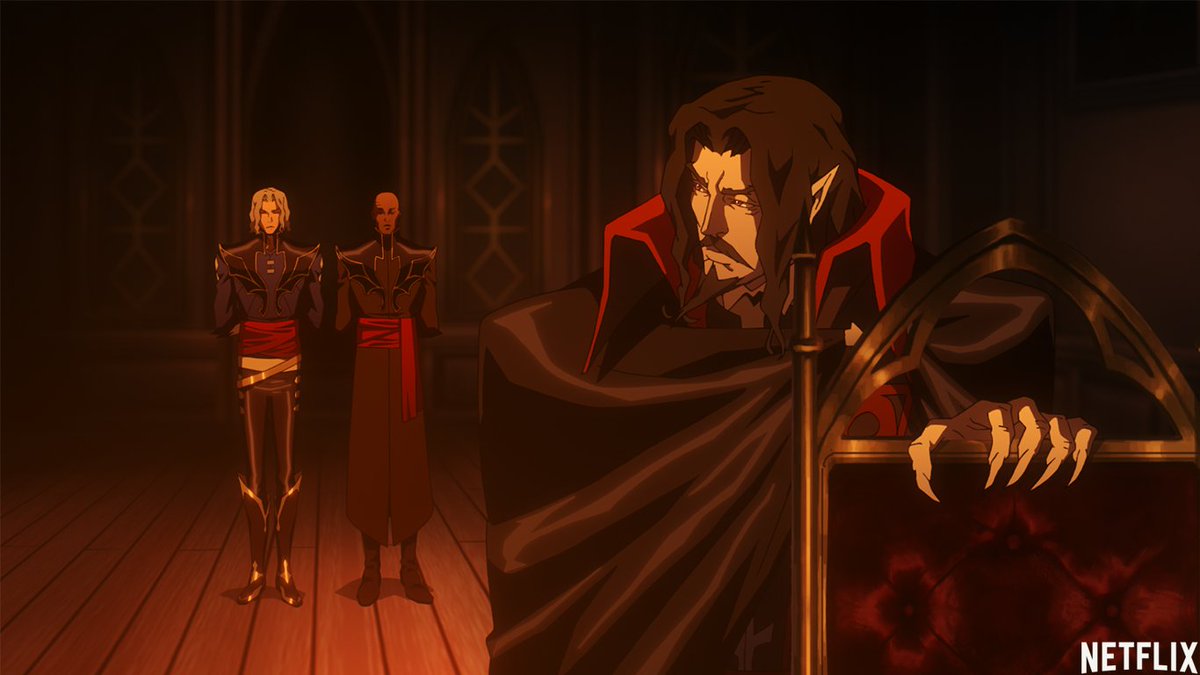 - Twitter post
Though this was already clear if you've watched the trailer, Dracula confirms the following fact...

'Twould not surprise me if the first episode is primarily flashbacks and alternate perspectives to introduce all these new characters.

Finally got round to watching this the other day, though it deserves a second viewing because hyper bouncy offspring. I am loving Richard Armitage's vocal talents. I've never played the games so can't really draw comparisons, but I really enjoyed how well this was done. 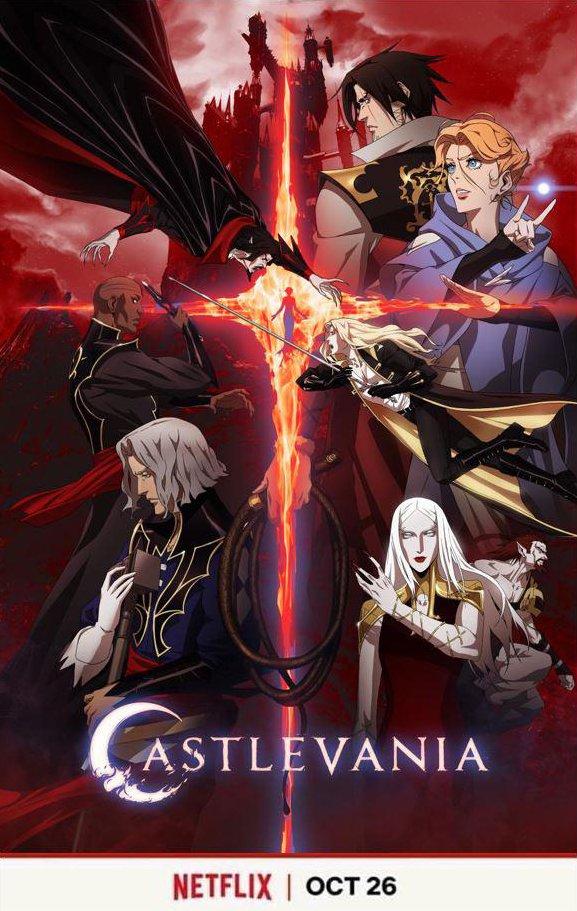 #90
I just finished watching Season 2 on Netflix. My hype was justified. <3

The missus and I binged S1 last night, and we'll be diving into S2 as soon as she's off work, so I'm even MORE excited now, knowing that YOUR hype was justified, because that speaks volumes to how excited I am about it being as excellent as I've been confident it would be.

Going by the reviews it got days ago, S2 is indeed pretty good. I'll watch tonight the first four and the last four tomorrow.

Just finished Season 2 where is my goddamn Season 3 already

I'm easy to please, but this was a nice way to spend my Friday night.

#94
Just finished season 2 of Castlevania. And wow, what a great season. Also really glad the writer had the wisdom to make the penultimate episode the action climax and the finale be dedicated to the fallout and consequences. Alucard breaking down actually got me teary eyed, so good 👍😢

Assuming the Castlevania series gets multiple seasons (and that season 3 adapts the Curse of Darkness game in some loose manner); I think the next eras/games that should be adapted (for optimal narrative flow/structure) would be to skip the Christopher, Simon, and Juste Belmont games and adapt the Rondo of Blood/Symphony of the Night games into about two seasons, then after that adapt the Soma Cruz games into another two seasons. With Alucard being the connecting element/character for the saga “trilogy”. That would make the most sense to me. If there is still demand for more seasons at that point, then they can go back and do non-chronological seasons for the rest of the Belmonts and/or other Castlevania lead characters.

Also Isaac (particularly his relationship to Dracula) was a real surprise for how engaging it was. They really wrote his devotion/dedication in a compelling way (definitely find him more interesting than his video game counterpart). And the liberties they are taking with the Curse of Darkness adaptation/set-up makes complete sense IMO. If they tried to be completely faithful to the game storyline, the instigating incident for Hector would essentially come across as a copy-paste of Dracula’s (i.e. wife burned at the stake after being accused of witchcraft).

Wish I hadn't clicked on the thread since I haven't seen it yet but now I've got a good idea of how it arcs.

Finished watching season 2 and I liked it and it was an improvedment over last season (admitely it wasn't that hard to do). Looking forward to a third season.

Finished.
Fully satisfied with everything especially writing, music and animations. I appreciated how the first episodes are more "spoken" and how the action has increased only in the latest episodes (the scene with Bloody Tears it was amazing). The small details (the painting of Leon on all) and cameo also show the care with which the series is treated, and can't wait for S3.

They could have shown better the diabolic forging but this it doesn't affect the interesting evolution of Isaac and Hector even though the latter has "disappointed me" a bit, but perhaps it's also due to the italian dubbing that isn't the best and I'll watch it in english soon.
Alucard "tragic prince" at the end broke my heart

I'm just really impressed that in the end the season was technically about 70% just characters bouncing off each other, talking with clashing ideologies or having mad bants. There was a decent chunk of action but it wasn't even the main focus, something I was sure would come from of a videogame adaptation. I was constantly entertained by the way the villains are fucking chewing up the scenery, whether it be Dracula presenting as a really infinitely tired, old warlord wanting to end it all or Godbrand being such a massive fucking dork that the most badass thing he can shout at the front of his viking boat in his badass slaughter wet-dream is his own stupid name.

I'm honestly not a fan of a lot of Netflix shows, but I admit that Castlevania S2 moves at a pace that suits the Netflix production format infinitely better than it would as a weekly serial show - the episodic pacing is a bit awkward for me in the first half (again kind of like how Season 1 felt like an awkward in-betweener being paced too slowly for a clear TV series but with a duration too long for a single feature film) but it really comes into its own in the way it builds up all its characters. Or most of them, I guess. The ancillary side characters like Generals all had cool designs and a couple of slick moves but it's a bit disappointing they got so little development at all, especially given how many episodes and how much time the show spent focusing on Trevor, Sypha and Alucard slumming around inside a library.
The constant talking heads normally would disappoint in a lesser production but the amount of time and care they budgeted to things like composition and art makes so many scenes so vivid and meaningful that it doesn't really matter. The final scene of the season seems like such a lavish animation that in a regular serial format I think it would probably come at the expense of something else in the budget. But here everything shines wonderfully, even if the resolution and setup for Season 3 is probably a bit too corny for my taste. I dunno, Sypha was absolutely top-tier amazing in this season but they pushed the lovey-dovey shit really super hard towards the end in a way I felt was previously more subtle. Am I reading it wrong?

Personally I think Episode 7 would have been the perfect ending to the season, but otherwise Season 2 was pitch perfect top to bottom. I'm just really incredibly impressed by how well it stands on its own right and not just as a videogame adaptation. I mean, I already got that sense from how much I enjoyed Season 1 without a whole lot of context in the first place, but Season 2 feels like they were given the chance to let the script breathe and give itself room to develop into a deeper thing.

Also I'll say it again, Sypha fucking slays in this season and the sakuga they give her is just *chefkiss*. Love everything about this version of her

Lulcielid said:
Outside of Carmilla, the other general Vampires were a waste, generic if using them only for the climatic fight was their sole purpose, generic night creatures could have taken their place.
Click to expand...
I respectfully disagree. We've seen each member of the trio 1 shot various night creature types at this point. To have a final big fight with them yet again wouldn't raise the stakes nor add tension. Furthermore having them suddenly start dodging the morning star, magic etc. would also feel like a convenient cop out (i.e. like Apocalypse 1 shotting everything for an entire movie, only to start not instantly killing Xmen in the final battle).


Before this the only time we've seen our team fight an actual vampire was the Trevor and Alucard fight in Season 1 so with knowing how that fight goes it does add tension for this final battle when realize each individual member is basically about to 1v1 their own Vampire.

Point in case it would not have been the same pay off to see Sypha slice in half a generic creature with that sheet of ice like she did with the General, nor would have the shots of the General adapting to her attacks and putting pressure be as tense.

Also I do think Godbrand is just as essential as Carmilla was, if only for also being a tool in showing the true colors of each Forge Master. Like Carmilla helped show us that Hector is a child, Godbrand helps to show just how convicted Isaac is to Dracula.

#100
I'll write up more coherent, fleshed out thoughts on this eventually but just wanted to say I binged watched this season last night and I really, really loved it. Vast improvement over the first season, I think the pacing was helped a bit by the extra episodes, and I totally teared up when Bloody Tears hit.