My tablet can't even handle the main menu of this game. Think I'm gonna have to try emulating it...

So I lucked out and got two of Garnet's EX weapons. And man... those are worth it. With her EX weapon and Awakenings, Garnet has a great all around kit that does a little bit of everything. And it's not even a jack of all trades, master of none type of kit. It's more of a jack of all trades, really good at two things (AoE and Elemental damage) and decent at another thing (BRV regen) type of kit.

It's a good representation of her character set-up from FFIX (damage dealer with some healing on the side). I'll be very happy to add her to my default team as a damage/support character.

I also managed to get all my characters to Lvl 50 and Crystal Lvl. 40. Which makes using boosted characters much more appealing.

#253
Obsidian Fire said:
So I lucked out and got two of Garnet's EX weapons. And man... those are worth it. With her EX weapon and Awakenings, Garnet has a great all around kit that does a little bit of everything. And it's not even a jack of all trades, master of none type of kit. It's more of a jack of all trades, really good at two things (AoE and Elemental damage) and decent at another thing (BRV regen) type of kit.

It's a good representation of her character set-up from FFIX (damage dealer with some healing on the side). I'll be very happy to add her to my default team as a damage/support character.

I also managed to get all my characters to Lvl 50 and Crystal Lvl. 40. Which makes using boosted characters much more appealing.
Click to expand...
In what missions were you able to get the materials to get everyone to level 50? I'm STILL having a hard time....

I didn't use materials. Right now the Pursuit of X Crystal quests are both unlocked (you can run them as many times as you want) and are giving double rewards including Exp. So I make a party of two of the characters I wanted to level and one Lvl. 60 character and then just did the Lvl. 50 quest over and over again.

In addition to dropping tons of crystals (which are very helpful for powering up characters), those quests drop 2* Chocobo Feathers. I usually save up Exp items for when I Awaken characters so I can level them up all at once and get past the bulk of the 50 - 60 levels. Getting past those levels feels like it takes forever. In addition, I also have a lot of saved up Books of Training, so that helps a lot too.
U

#255
The Kactuar Konudrum event is coming back this week as part of the spring festival, with missions that give out power tokens. Starting April 18th, they are releasing Eidoja, 5* artifacts that give a 50% chance of being an orange passive. Currently Eidoga only gives a 10% chance.

So these new G coin things that you get for doing the 5000 gem 10x draw... I got 40 of them last week and now they are gone. Do these fucking things really expire????
U

#257
Yes, they are only for that specific draw. You’d need to pull 15 times to spend them on an ex weapon. It’s there for people who are desparate for a specific ex.
U

#258
Ignis is in the next chapter in JP. His EX skill actually has him bring out a chopping board.

So much creativity wasted on such a bad platform and intentional mobile limitations. Its frustrating.

Got a Lili up currently.

I play global but sometimes JP to have some fun with rerolling, etc. Next time I do that will be when Aerith gets EX+

Apparently there is something going on with Zack in latest chapter in JP 👀There is a scene with Sephiroth, Cloud, Zack, another with Cloud, Aerith, Zack ...

They just added this thing called the Summon Board and I am so confused by it @_@
It's like they've added a whole new system on top! And it's as robust as the sphere grid from FFX!! I hope the developers of this game are getting paid well, they are working tirelessly to make this game flippin' great.

So I never said this but I started playing this game around late-April, and let's just say... This game has sunk its fangs into me deeply.

It'd be an understatement to say I'm playing hard. Very hard on this.

What got me to try it for real was just the sheer number of freebies I kept getting for this game, that confused the fuck out of me. I couldn't believe how generous this game was. So I said, "fuck it, why not."

And then I saw Lightning was being promoted.

And I did one pull and got her EX weapon.

So... It spiraled from there.

I have mastered passives and EXs for Lightning, Kuja, Quistis, and Vanille. Bartz, Palom, Locke, and Kefka have at least 1 weapon passive while I work on the other.

And I have fully awakened and mastered passives for Cloud, Squall, Yuffie, Eiko, Setzer, and Cait Sith.

I'm like playing this regularly and I never thought I'd be this into a mobile game, let alone a S-E one. I was burned hard by Brave Exivus. Fucking hated it. Thought Opera Omnia would be the same in terms of shitty gatcha rates and ridiculousness but.. No. Exact opposite.

Suffice to say, this game is really well done. I love the combat system and it really brings the classic elements of Dissidia with a really in-depth turn-based combat system.

Never thought I'd get hooked in by a mobile game but here I am. Grinding the summon board and unlocking stuff for it. Btw, I love how this game apparently plays off of what happened in NT, and essentially now teases their memories, which is kinda twisted given the ending.

Global App just retroactively gifted me 5* weapons and other goodies for completing the older Lost Chapters. Log in and scoop em up y’all!

Pitch part 3 - Vanille, Quistis, Lenna, friend Golbez, Ifrit - Before the return of Lenna's Lost Chapter with her EX banner I finally managed to beat this with Beatrix, Quistis, Eiko with Golbez and Ifrit friend but was really struggling with part 2 so I had to reset the parts to free up characters again and rebuild teams

Pitch EX- Vanille, Quistis, Lenna, friend Golbez, Ifrit - This set up is wild I took 9 breaks and still got a high score

I love Vanille/Quistis/Lenna synergy so far ;3 Also initially I beat part one with Agrias/Beatrix/Vanille but after resetting the parts to free them up I had to come up with another team to beat part 1 and that took a while and was tough and hair raising somewhat frustrating but eventually I found another team line up that worked!

I GOT FORCE STEALER!! Amazing. I saved up enough crystals to make sure I could buy it if my 10x draws didn’t pan out, but I got both Cloud and Firion’s Ex Weapons with exactly 200 green coins amassed, so I got 2 power stones and used my hoarded orbs to turn the weapons blue. Happy day!

The latest update makes this game unplayable on iPhone 8. It’s impossibly sluggish and crashes all the time. I’m holding out hope that it’ll be fixed with a later update, but sadly I doubt it will ever get better for older phones.
U

#268
Are you running ios13? It doesn't work with that. Try closing all your apps and restarting your phone. There's a thread on reddit that mentions the same thing as you, but that's Android. 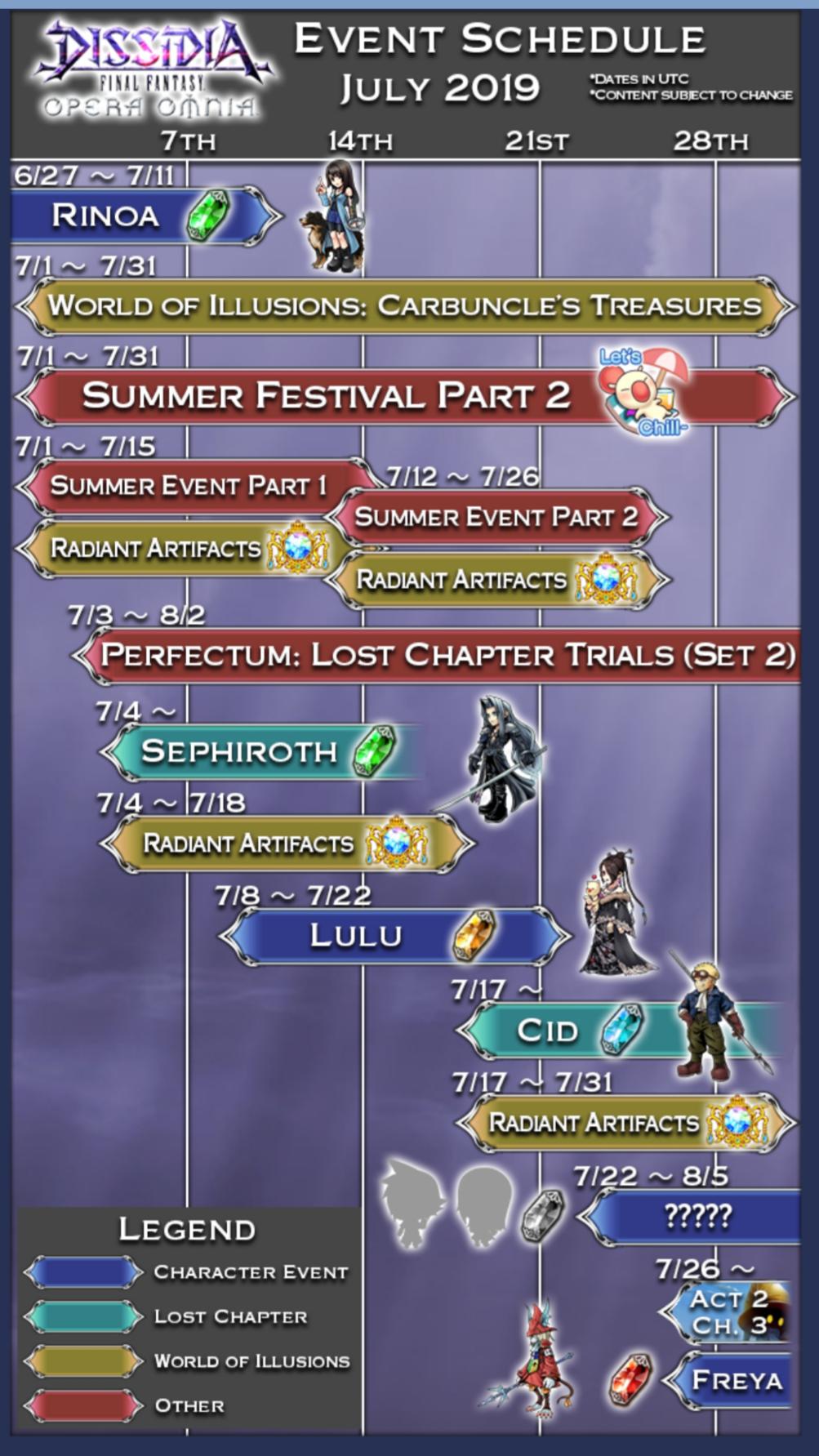 And a quick summary of the livestream on Monday:

ultima espio said:
Are you running ios13? It doesn't work with that. Try closing all your apps and restarting your phone. There's a thread on reddit that mentions the same thing as you, but that's Android.

And a quick summary of the livestream on Monday:
Click to expand...
Thanks Ultima! I’m on iOS 12.3. After a restart, it is at least functional but still sluggish to the point of teeth-grinding stress. I got about a third of the artifacts I usually do from the 30 minute timer. :/
U

#270
General Leo is coming in the next chapter update for JP:
https://www.reddit.com/r/DissidiaFFOO/comments/c6kaee

Wow and his artwork isn't garbage either!

Yup. That was when I knew, this game was legit.

Opera Omnia already ahead of the curve with their portrayal of Cloud.

I mean, not to throw shade, but I'm just gonna throw it out there and say the new writers from Team Ninja got the personalities and characterizations of the FF characters 10 times better with Opera Omnia and NT, than the PSP games.

Like, it's not even a debate to me. The new blood knew what was up and what to include and emphasize.

I love Kitase and Nomura, but I dunno, for some reason they like ti emphasize the wrong traits of certain characters and re-do the same tropes over and over.

#274
Of course the "mosey" line would be a credit to the localizers who screwed up such gimme references in the PSP games as "There's no getting off this train." But yeah I would actually be curious to learn who the writers and localizers are for this game as they seem to clearly be fans.

Sephiroth's Lost Chapter recently dropped for Global, and with it his EX banner.

Been saving up gems for this. He was one of my hyped pick ups for Summer. Yet I was worried on how I was gonna have enough gems to be able to pity-pull him, Zack in August, and then Noctis in September. Was only sitting on like 120k in gems so FML.

I was 4 pulls away from having to pity-pull Rinoa's EX so I'm used to the pain and suffering of awful gacha luck.

Third pull is nothing buy bronze 3 star trash until the 11th weapon, which is the Mako Katana. Sephiroth's EX. So in 3 pulls I got all 3 of Sephiroth's weapons. All his weapons came to me for just 15k in gems!

A NEO-REUNION, YOU COULD SAY.

I lost it. Looks like Zack and Noctis aren't a question anymore.

Now I just got to make sure to pick up the EXs for Warrior of Light, Beatrix, and Ultimecia. And I'll be happy.

Vayne is coming out soon, probably will just throw some tickets at him and see.

But I just love this game. It can be rough but at least you won't be totally fucked over like a lot of other gachas. There's a ceiling where the pity tokens will give you the EX regardless.