Lulcielid said:
SIE has sold 10M PS5 globally.
Click to expand...
I wonder how much went to scalpers

A few months ago Sony was testing something similar with Playstation Plus Video Pass in Poland. The service would give access to movies and tv shows of Sony Pictures.

I say the idea of a more premium PS+ is quite likely.

#805
Update: Still impossible to get a PS5 the regular way (ie going to a store or ordering online from a store) in Norway

It's a shitshow lmao

Edit: It doesn't really bother me that much though, I've been using my PS4 quite a bit recently, so. It's fine. Though had there been a PS5 only release I'd been craving I'd been fuming. I already looked up Judgment 2 and they're releasing it for PS4 too so it's fine

i already feel like you get less from ps+ than you used to. back in the ps3 era there were months where there'd be what felt like a dozen games included, for console and handheld and ps1/2 archive (though a lot less 2). i still have a bunch of games from back then that i plan on playing. then it slowly started whittling down. first you stop getting psp games, then no more game archives, then no more vita and ps3 games. and now it's 3 games, and except for innocence a plague tale i can't think of many games this year have been that exciting to me. i don't know much about the xbox game pass but it sounds like a better deal than the ps+ collection thing for ps5 which is like 20 games, a bunch of which were previous ps+ titles anyway. idk i feel like i am keeping my subscription out of inertia and for access to stuff from years ago (a lot of which is for the consoles sony no longer supports).

(also last month the japanese freeplay offerings included two games rated cero z, which you can't claim unless you have a japanese credit card. but i don't and use prepaid cards, so for july all i got was bloody wwe battlegrounds or whatever it's called. the only way i got the game i was actually interested in last month was because i still have access to a uk account with a card attached. so instead of adding two additional games with lower ratings for anyone who can't get cero z games... well i hope you like microtransaction-laden cartoony wrestling games 'cause that's all you get)

the thought of them adding a premium tier doesn't inspire much hope in me that they will improve the service for the regular subscription. at this point i am paying for maybe one game every few months that piques my interest, and the ability to play online. and i can count on one hand the amount of times i've played anything online in the last year (and that was like, tetris 99 on the switch)

bring back the game archives. do something like nintendo's famicom/super famicom online thing and offer a free library of classic games. god just do something.

Um, what about PS Play Collection? Or have they not offered that in Europe? That's a huge library of PS4 games you get for free right off the bat.

I mean, PS5 users get 2 PS4 games *and* a PS5 game every month. It's not always a hit but it's definitely better than the PS4 iteration of the service.

PlayStation will be one of the first to get upcoming rebuilt HBO Max app.

It’s pretty sweet. Love the controller, love the tech demo and the UI is a big step up from what we had with the PS4.

Despite people mentioning how big the PS5 is, it still surprised me. The thing is huge!

#811
That they have had to add folders after the fact to three straight consoles is absolutely pathetic.

Makoeyes987 said:
Um, what about PS Play Collection? Or have they not offered that in Europe? That's a huge library of PS4 games you get for free right off the bat.

I mean, PS5 users get 2 PS4 games *and* a PS5 game every month. It's not always a hit but it's definitely better than the PS4 iteration of the service.
Click to expand...
don't disagree it's a better offer if you have a ps5 and can make use of it fully, but that's part of the complaint i have in general

i mentioned the collection for ps5, but almost half of those have previously been ps+ games (so if you've been a long time subscriber you already have access to them). i think it's a decent selection and great if you're just getting it with a new ps5, but it value is slightly diminished if you've been around for a while. i don't know if they plan on expanding the line up in future,

this was spurred on mainly by the rumour of a premium subscription and the monthly offerings decreasing. i don't expect a lot of ps5 games (are there a lot of ps5 games yet?), but it's disappointing that as the amount of consoles they actively support has decreased what's offered by the subscription when from half a dozen or more games a month to 2/3 games and paywalling online play with the potential that they'll split it up by adding a more expensive plan. especially nowadays where everything is a subscription

what i'm saying is, why can't the latest console that i paid hundreds for play ps1 games like even the psp could. give me that as a bonus, i want to play jade cocoon on the ps5 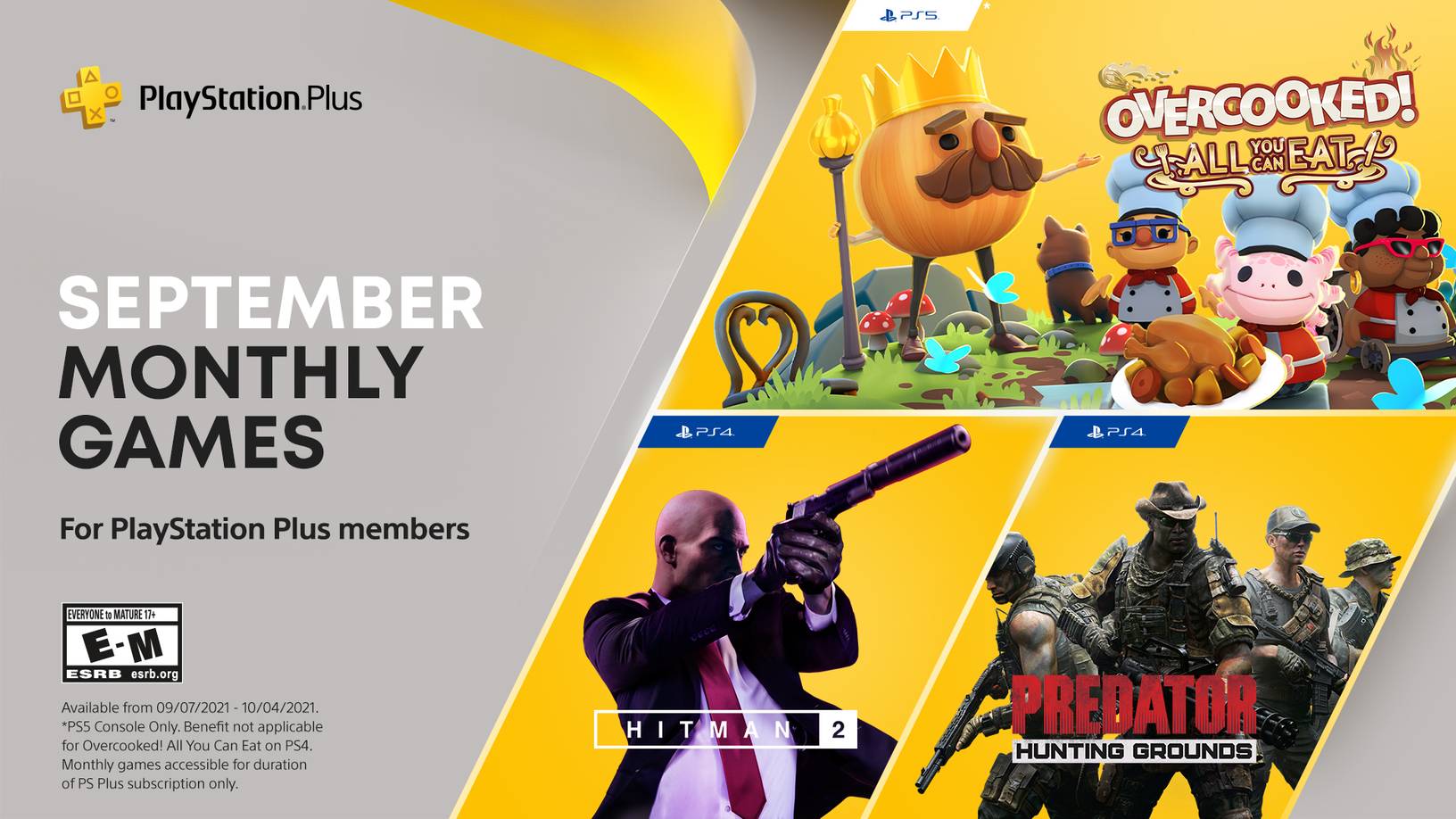 I'm here for Hitman; the 'first' game was pretty good.

Not sure about them releasing effectively a level pack and calling it 2 though.

#815
Overcooked is a super fun co-op game. My wife and I played quite a bit of it

https://twitter.com/i/web/status/1433406942890930177
Tune in next Thursday, September 9 at 1:00pm Pacific Time / 9:00pm BST / 10:00pm CEST for a look into the future of PS5. The Showcase will weigh in at around 40 minutes and include updates from PlayStation Studios and some of the industry’s most imaginative developers, for games releasing this holiday and beyond. And stick around after the presentation to get more updates from some of the studio teams featured in the Showcase.
One thing to note: PlayStation’s next generation of VR won’t make an appearance this time. But there will still be plenty of great PS5 games from developers large and small. We hope you can join us!
Click to expand...

#817
Hey I'm actually off next Thursday. Let us strimm

Thursday was to be a celebration of Horizon Forbidden West and the amazing team at Guerrilla working to deliver it on February 18, 2022. However, it’s abundantly clear that the offerings we confirmed in our pre-order kickoff missed the mark.

*To upgrade an eligible PS4 game on disc to the digital PS5 version, you will need a PS5 console with a disc drive. PS4 game discs can’t be used with the PlayStation®5 Digital Edition.
Click to expand...
Future first party cross-gen games will have a PS4 to PS5 upgade at $10 usd.

From first party at least.

Square and Capcom gave it for free. What's Sony's excuse?

That's 847k units for the regular model and 165k for the digital model. The system's best selling retail game is Resident Evil Village at 67k units.

By comparison, PlayStation 4 launched in February 2014 in Japan and did not reach one million units sold until January 2015, nearly a full year later, PS5 reached one millon 2 months faster. 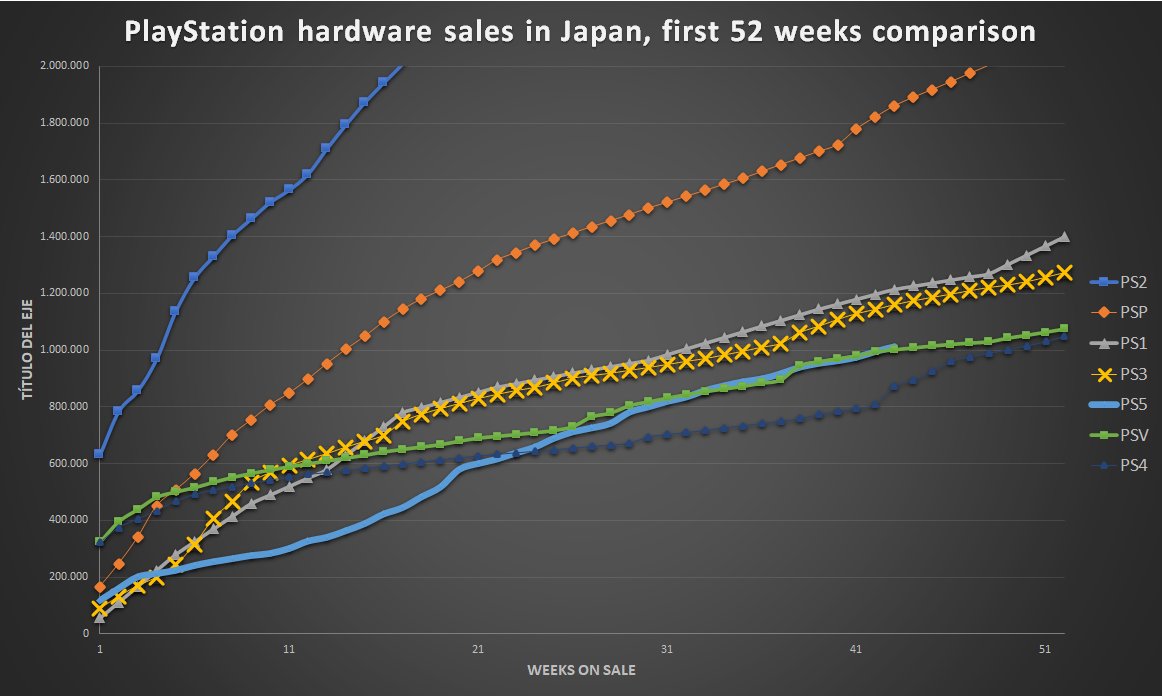 Isn't the amount of units sold lower than it could have been due to supply issues?

I was hoping to see some more games like Final Fantasy VII REMAKE Part 2 (maybe TGS 2021?), Star Wars Jedi 2, The Last of Us REMAKE (if happening), Prince of Persia Sands of Time REMAKE (I wonder how it looks now) and a Jak and Daxter REMAKE as well, but the list of games shown was satisfying. Fan of them so I am happy with the showcase =D

Looking forward to see more of these games.

I thought Grand Theft Auto 5 for the PS5 was the announcement trailer for the 6th game, but realized fast that it is just GTA 5 upgrade

Seriously, how long will they keep GTA5 going? PS3>PS4>PS5>PS6? I rather see Grand Theft Auto 6 and a PS5 version of Red Dead Redemption 2 than GTA5 and I am sure a lot of other fans would like that too... Enough with GTA5.

I believe SE will push out more info of FFXVI first and then focus on FFVIIR2. We never know though, they might end up surprising us after all. Sometimes unexpected stuff really do happen, just like Marvel's Wolverine from Insomniac Games. What a surprise announcement trailer/teaser. =D
You must log in or register to reply here.
Share: Facebook Twitter Google+ Reddit Pinterest Tumblr WhatsApp Email Link
Top Bottom