Troll question of the day

Rising is a god-tier character action game, but MGSV hits its action and stealth beats so well it's hard to fault it mechanically monster:

Overall I enjoyed MGSV more, I think; Rising is not a bad game, but it felt kinda cheap here and there, probably because the story wasn't really fleshed out / made little sense (MEEEEEEEMS!) compared to either the previous MGS games or MGSV. I liked the gameplay though,

Also yeah, Rising wasn't a Kojima game afaik, and I'm sure they could pull off a sequel to that without too much problems. Actually with MGSV they've definitely stepped away from the existing MGS formula (linear, long story/cutscenes, etc). 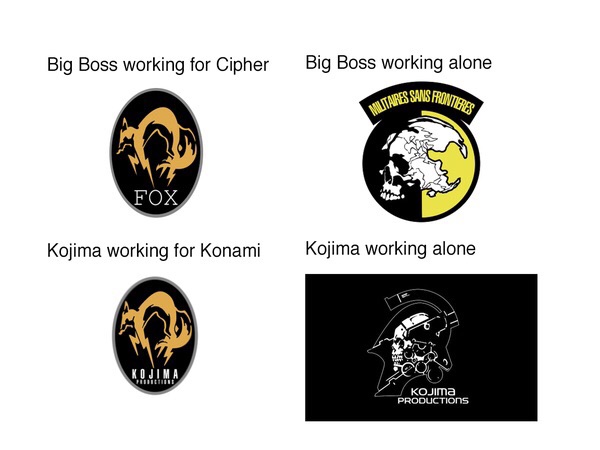 If you weren't aware, the skull is shaped in the form of Pangaea, the super landmass that was theorised to exist millions of years ago which consisted of all the continents of the world before it broke apart

Hence, "sans frontiers" - which is the super badassest logo design I've ever seen in forever
C

#857
Finished this. Short version, Brilliant gameplay, mixed feelings about story, lots of the main missions could easily have been sideops.


Sahelanthropus had no punch as a bossfight, it was just another giant robot fight, didn't have the impact of Peace Walker drowning itself, or the multi stage battles of the likes of the Shagohod, or REX.

My kill count was quite high for this series, I hit the 60s, mostly splash damage from armoured units I was using explosives against.

The vocal chord parasites came from nowhere and seemed like too big of a deal to just vanish afterwards.

Ocelot was great as always. I was wondering why he hadn't betrayed anyone yet until the ending.

Quiet was also great.. Mission 45 was incredibly hard, I was reduced to spamming airstrikes to get through it. It was great enough that I don't care that it makes no sense for two armoured units to randomly storm a prison camp in the middle of the night. Snakebites should have been a gameplay thing before then to make the scene work better.

Ignored all the repeat missions.

43 was a huge emotional hit, many of my kill counts turned out to be my own people.

Think maybe Konami had a point about the game budget. What did it cost to get the rights to all those songs, which probably weren't available to soviet soldiers in Afghanistan anyway?

What does Eli do with his giant robot, anyways?

Ending:
So... the Medic discovers the truth in Outer Heaven minutes before Solid kills him. Yowch.
MASSIVE PLOT HOLE: Who the hell does the background checks for Foxhound?

President: Are you, or have you ever been, a member of any organisations that conflict with the interests of the united states?

BB: Well, I did lead a world famous private army of mercenaries trading on my name that had 'loyalty to no nation' as a core tenet, had access to nuclear weapons, which were then stolen by third parties and almost wiped out by US black ops teams... twice.

Zero stole every scene he was in.

MGSV did a whole lot of great things in terms of characters, where the caricatures you see in MGS4 and Peace Walker are really portrayed as just people with ideologies. Especially with people like
Zero
and Strangelove, the tapes reveal a whole lot about their part in the series

Oooo remade MGS 3 cutscenes... or ps2 graphics are better than I recall. I also just corrected ps3 to ps2 because fuck me if I didn't remember it was a ps2 game.

why'd you put so much effort into that, you little shits konami

I'm inclined to think those slot machines (or at least the owners thereof) will earn a metric fuckton of money though.

edit; though watching the trailer again i see (through the tears in my eyes) that it says it 'completely reproduces' the game

why you gotta be this way, konam

I don't have any idea what the fuck was being said there. But...this looks to me like the equivalent of kidnapping one of Kojimas loved ones and then mailing him body parts and shit. That's how I would feel if I was him

Also, has there ever been an Al Pacino Pachinko machine? If not why not?

Click to expand...
I described the situation surrounding MGS and this most recent abomination as such to my friends:


"It's like this cute girl you knew in high school. She was pretty, funny, smart, loved you for you and did anything and everything to please you. But then her dad moved her away and you have to fool around with two temporary girlfriends, neither whom were anywhere near as good as her. And then you get her dumpy cousin who is fun to be with, but never stops talking. Then you have the girls sister who you dated for a little bit - some of the best times of your life- then you broke it off for a bit and came back to her and she was still fun but somehow things weren't the same.

Nothing was good enough until you finally saw your high school sweetheart again in a back alley behind a bar in Singapore where she was dolled up, having lived the hard life of a prostitute in your absence. You got there too late. She's dead, with the thugs still fucking her fresh corpse. They draw their knives and mock you - "the bitch is still wet" they say. You have only one option, the lugar you've got hidden in your breast pocket for such an occasion. You fire one shot which richochets off a nearby garbage can. The two thugs run away.

You know there's nothing else you can do to help this girl you once loved, but the best thing you can do is give her some dignity now to her remains. You call the authorities but you don't speak the language so simply leave the phone off the hook and walk off. Before too long you hear the sirens moving down the road to discover what remains of your lost love. You suck down a cigar. Yeah, it'll kill you they say. But life isn't worth living any more."

That's all I've got to say about that.
It's almost to the point that I wished some insane fan-boy out there donned a Grey Fox outfit and laid utter waste to Konami HQ.

most of this is pachinko crazy ball nonsense but watch from 2:00 until about 3:40 and look at how sickeningly good that looks, it makes me want to throw up

My friends Jacob and Brendan are FINALLY getting around to playing this gem. Jacob is about to get to Mission 43... you know. That mission. He's already had the game spoiled for him but you still can't spoil a moment or feeling too much when it's powerful enough so he was asking me
if that mission is really as depressing as they say. I took 15 minutes in MS Paint (as I am wont to do) and made this to describe it to him:

Also we were talking about him not wanting to
let Venom Snake wear BB's bandana. He had the Big Medic spoiler going into the game (thanks to the internet) and he reasons that John (the true Big Boss) won that bandana fair and square from his fight with the Boss. That was his battle. Then later Solid Snake killed Big Boss. Venom did none of that, so he doesn't deserve the bandana.

I argued that Big Boss has at this point chosen Venom and chosen to become a legend ("He's not being a hero. He's being something more"). As a result the bandana truly belongs not to John or the title of Big Boss, but to the man who has the title of Snake. And what makes MGS4's ending so powerful is just before BB dies, we see him not as a legend but as a man. He lived as a legend, but died a man. Thoughts?
C

#870
Big Boss spoilers
His name's actually Jack, he lied to Ocelot in MGS3.

The bandana is arguably both given and taken when it changes hands. That works here too, as the explosion is force but Medic is allowed to keep it by BB.
After this game, I have a question about the end of Peace Walker.


Was it Skull Face that ordered Paz to nuke the US? That would cause chaos and likely BB'S death, two things that Zero is very much against

Throughout MGS3 and Peace Walker, the bandanna seems to be basically a representation of Big Boss' emotional connection to The Boss. After Peace Walker he straight up emotionally cuts himself off from The Boss because he fundamentally disagreed with her ideology, so he ditches it (one of his more dramatic moments of his transition from Snake into Big Boss)

In MGSV, it's little more than a novelty unlock with little significance to the actual game, which I think has its relevance on multiple levels.


Paz was ordered to issue the ultimatum while in control of Zeke, to scapegoat MSF if Big Boss wasn't willing to come quietly. Zero wasn't in favour of killing Big Boss, but during the briefing he makes it very clear that once she throws down and gets revealed, it's likely that only one of them was going to make it out alive
Last edited: Jul 19, 2016

Clement Rage said:
Big Boss spoilers
His name's actually Jack, he lied to Ocelot in MGS3.
Click to expand...
This is where it gets confusing for me.

1) Raiden's real name is Jack.
2) Jack is often used as a nickname for John.
3) Kojima is pretty terrible at non-codenames (or at least has been since MGS1).

But yes I reckon you're right. The only other interpretation (if 2 holds true) is he was keeping Ocelot at arm's length (formal name only) but that doesn't make much sense in context.


@Hisako: Great observation though didn't he reconcile his feelings for the Boss at the end of PW (during that hippie song / 6.5 / 10 on the feelsy scale ending?)

Big Boss' name
IS John. Jack is a nickname.

Tetsujin said:
Big Boss' name
IS John. Jack is a nickname.
Click to expand...
Jack IS a common nickname of John, Jack knows this because the Major tells him as much in MGS3

That's where he got the idea of what to tell Ocelot, neither of them still gave the other their actual names. Jack is as far we know still Raiden and Big Boss' real name, or at least the one and only name anyone that is aware of their civilian identity refers to them by.

neither of them still gave the other their actual names
Click to expand...
Yes, they did. They confirmed John to be BB's name in one of the KP reports as well.