This is what they should've done from the start.

I was waiting for someone to do this:


Wow this is quite good. I mean it's not movie quality but I'm impressed with how well they put their Sonic over the movie one.

The film will still very likely be terrible, but I'm happy for Hesse himself if nothing else, if he really is working on it. The animated intro to Mania was maybe one of my favourite parts of the entire game, and the Adventures shorts were a lot of fun despite obviously being constricted by budget.


Wow this is quite good. I mean it's not movie quality but I'm impressed with how well they put their Sonic over the movie one.
Click to expand...
I can't get over how much better this looks. It changes the entire demeanor of the trailer from "tryhard" to "fun."

So a "leaked" design came which ofc turned out not to be a leaked design at all but someone just like... wanting to induce fear into everyone

but I guess some websites thought it was really so it was kinda funny. I'm warning you though, this is 100% nightmare fuel. The original design looks like a cuddely cute little bunny compared to this. 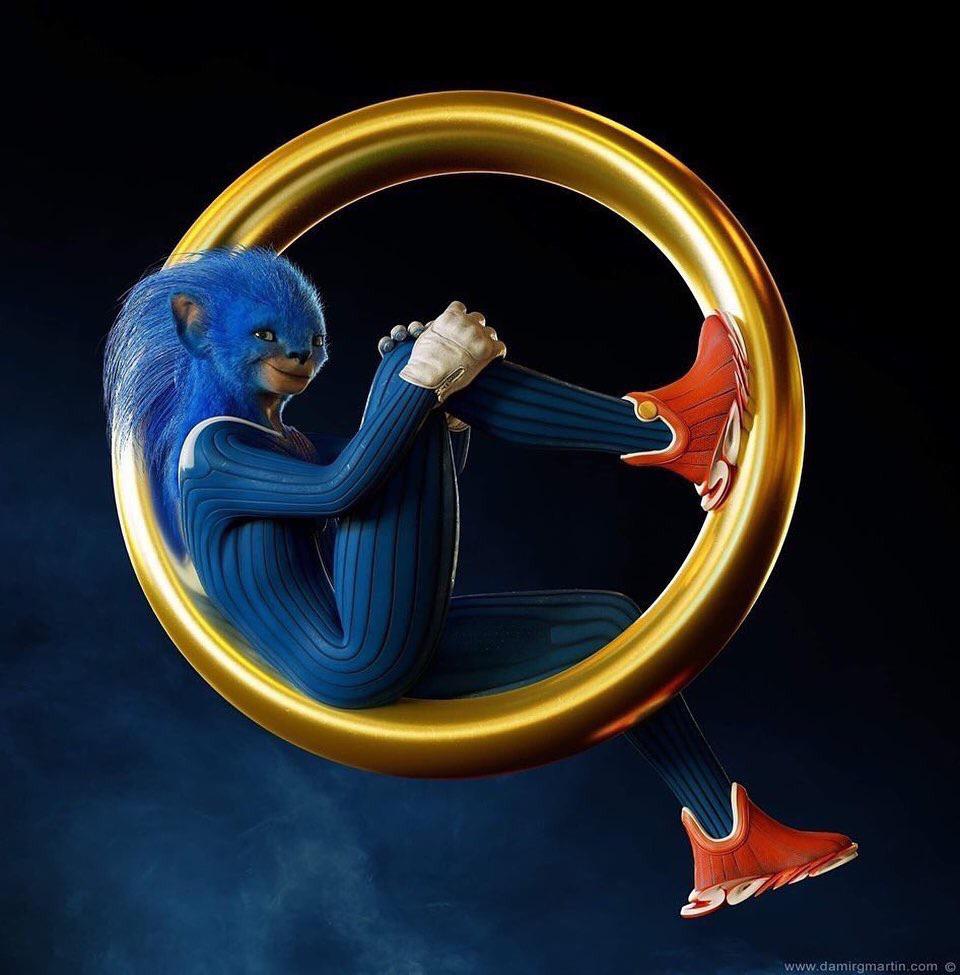 Actual page from the artist:
https://www.artstation.com/artwork/Vdkl5Z

You get THAT thing.

#1,384
What the hell are those grooves up his arms and legs?

We have a possible redesign leak. This one seems legit and holy shit is it leaps and bounds better... dunno what's so hard about giving him his peach arms though 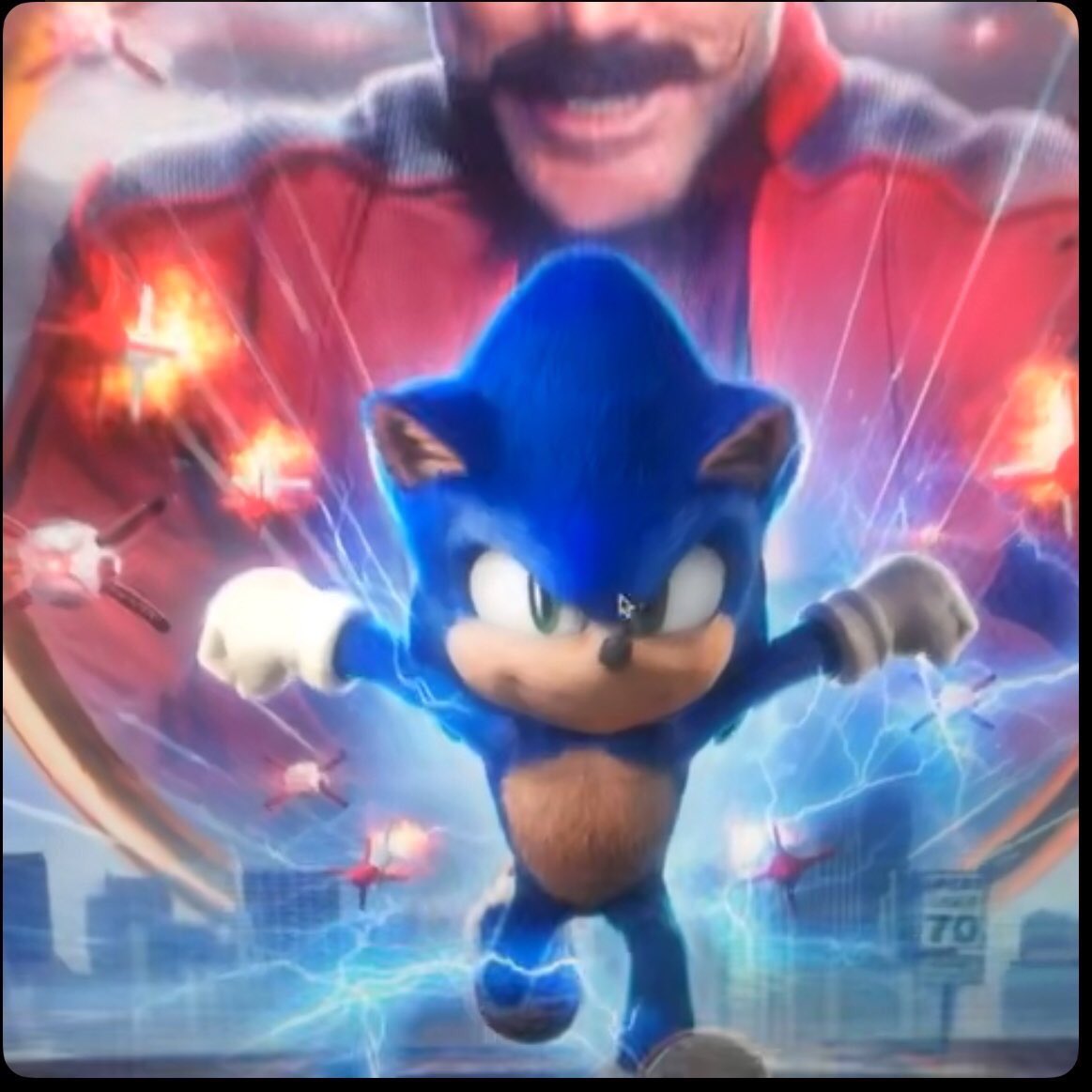 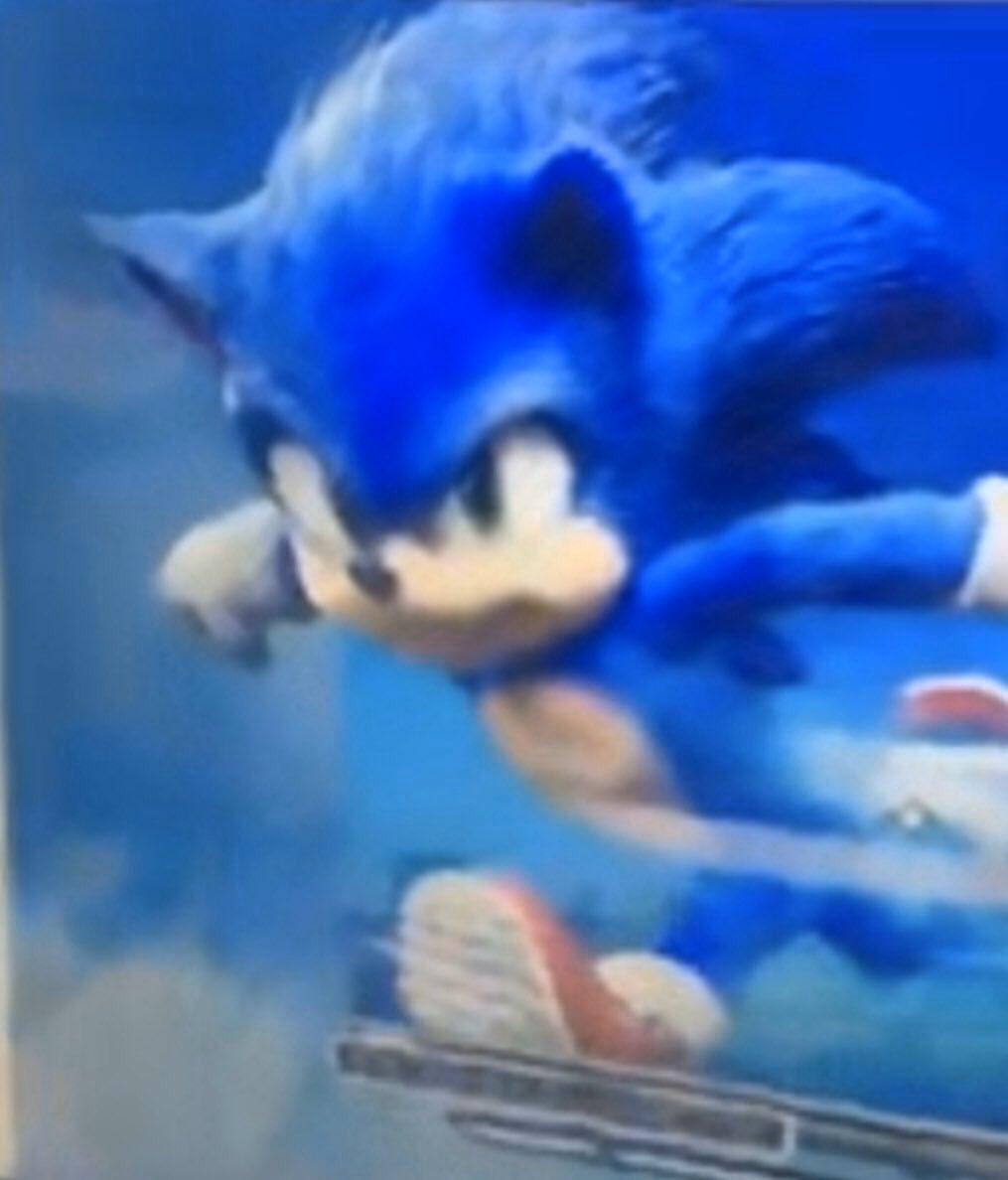 #1,386
At this point I'm just looking forward to the exposés on just what the hell the thought process was on that first design.

Actually he has a mouse cursor over his face in the first image and now I'm starting to doubt this...

It's 99% confirmed that Tyson Hesse worked on the Sonic redesign. BEFORE they announced the redesign he posted his "take" on Movie Sonic. It's almost identical to the new design, even down to the pattern on his shoes. Either someone made a 3D model of his artwork or this is real 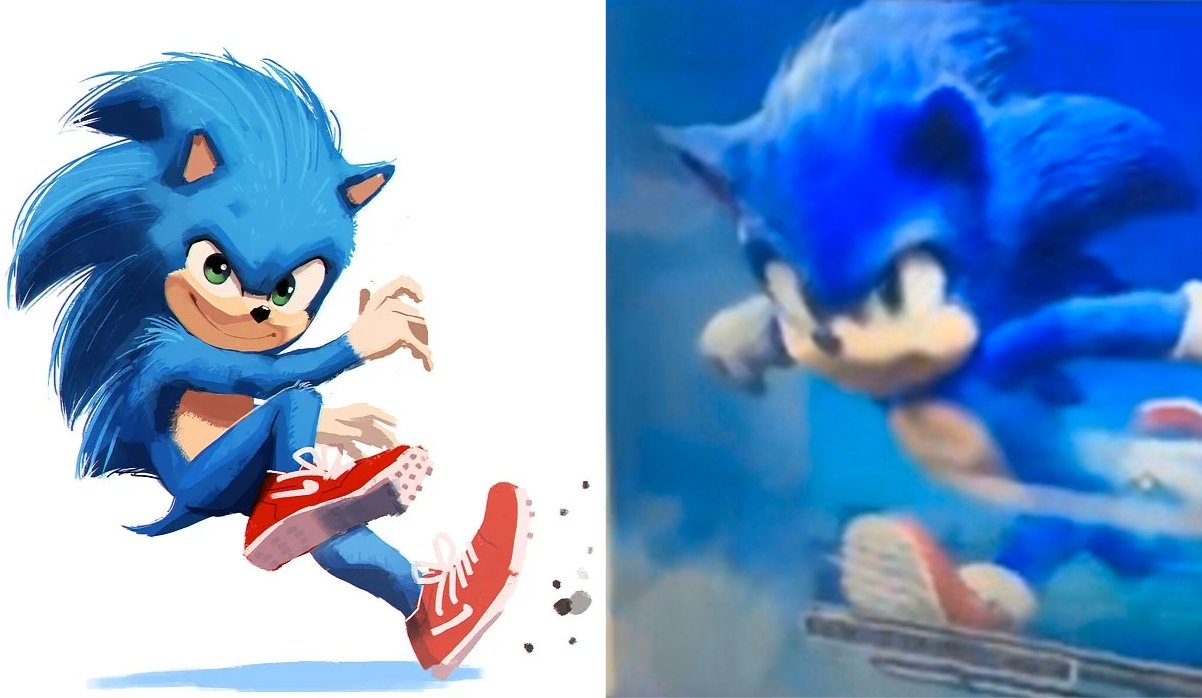 
aannnnnnd the redesign is 99.9% confirmed! Holy shit what a difference. I'm actually going to see this now for sure. He has his iconic shoes ffs! Did Puma back out of the deal or something?

And not to bitch because this is insane times amount better but I'll never understand why when people are trying to "redesign" Sonic for the Western audience, they always make his arms blue... what's up with that?

The movie is still gonna be bad though let's face it

#1,391
So the Hidden Palace is doing what they call Sonic month, where they are dumping a LOT of protos.

They started off with Sonic CD ones, the earliest one is dated December 4th 1992. Palmtree Panic is the only level available, and it was known as "Salad Plains". It's also the only build to ever reference the unused R2 zone, but of course doesn't feature anything other than Salad Plain.

It was followed by Sonic Chaos dumps.

Next they moved onto Sonic 2. The first beta they showed was just before the CENSOR prototype that was dumped earlier. This one is dated Sept 14th 1992. Most notable is that Hidden Palace was in the process of being removed, but not fully. Also the first build that had Sky Chase, Sky Fortress, Death Egg and a special stage. It also confirms that Mystic Cave was Dust Hill Zone, as it was given a title card in this build.
https://hiddenpalace.org/Sonic_the_Hedgehog_2_(Sep_14,_1992_prototype)

Yesterday they showed off another, this one dated August 21st 1992. Wood Zone and Hidden Palace are still fully intact! Though it's disappointing that they are identical to the Wai builds, it shows how long they survived. I didn't expect Hidden Palace to get anything more, but I thought that Wood might have gotten more of it's level layout. Hidden Palace still uses the Mystic Cave 2p theme as well, even though sound 10 is implemented.
Casino Night is also it's former pink self, with a completed layout and a boss battle. There are no other objects, though.
https://hiddenpalace.org/Sonic_the_Hedgehog_2_(Aug_21,_1992_prototype)

They promised one last prototype to be shown off in a livestream on Saturday at 2pm pacific. They didn't specify what game it was for, but it's something you don't want to miss.

. It also confirms that Mystic Cave was Dust Hill Zone, as it was given a title card in this build.
Click to expand...
I never knew why people doubted this lol. But yeah all these protos are really neat. It's awesome to see how Sonic 2 developed over time... I really DO wish we could find a Sonic 1 prototype though

and for those interested
New Sonic movie trailer tomorrow

was about to go to bed and then this hit!


YOOOOOO He looks SO MUCH BETTER! He's absolutely adorable! I love it. Robotnik had me laughing so hard this time... looks like the humor is spot on!... I'm actually kind of excited for this now!

Just LOOK at that improvement. It's insane! The movie looks like it's trying too hard in some areas but I think I'll enjoy it overall.

#1,394
Dashell said:
I never knew why people doubted this lol. But yeah all these protos are really neat. It's awesome to see how Sonic 2 developed over time... I really DO wish we could find a Sonic 1 prototype though

and for those interested
New Sonic movie trailer tomorrow
Click to expand...
The problem was that someone back in the late 90s/early 00s thought that Mystic Cave took the slot of the desert level after it was scrapped. That's when the theory started. After that the level artist Brenda Ross was spammed with questions about it, to the point where she just agreed and said yes that's right. She even made the famous mockup screenshot using actual assets from the game. Then we had hacks like Sonic 2 Delta and Sonic 2 Long Version that were widely spread, so it just became a fact. I found out about it in 2003, and there were already a lot of hacks and fan sites dedicated to the Dust Hill desert level.

Though it still wasn't proven, in 2008 someone contacted Yasuhara and he said Dust Hill was the desert level. Then in 2017 he revealed it was actually called Sand Shower. Still, a lot of people thought that it still took the slot of another level that was cut.

The article on the Retro wiki is being updated now with the most recent facts:
http://info.sonicretro.org/Dust_Hill_Zone

As for the next proto, if it's supposed to be that big, it'll either be:
Sonic 1 Tokyo gameshow
Sonic 2 with Sand Shower
Sonic 3 with Sonic 2 sprites/MJ music
I can't see it being anything else...

As for the movie, that looks so much better.

#1,395
The trailer is an improvement, but I can't reward the premise of the movie with my money

. I hope when the DVD comes out, that it features the option to watch the movie with the original design... for shits and giggles

#1,396
That is a massive improvement, both the design and the comedy. I feel the same as Ghost however. This is a rental at most for me.

Dashell said:
whoa wait, sorry for the double post but

It's 99% confirmed that Tyson Hesse worked on the Sonic redesign. BEFORE they announced the redesign he posted his "take" on Movie Sonic. It's almost identical to the new design, even down to the pattern on his shoes. Either someone made a 3D model of his artwork or this is real

The tracks that changed for the PC release just reverted back to their original versions. There's some unused BGM too that I didn't recognise.

The steams still going so of course there's more like the S2 sprites and some unused ones.

Mania's drop dash originated from this too.

Flying Battery is present, but with nothing in it. The bosses are present, though. Act 2s boss takes place straight after the laser room.
Mushroom Valley and Sandopolis don't load...but Lava Reef exists with a different pallete and no objects.

I played though that prototype a bit. Honestly having the drop dash is quite useful, especially in ice cap for those platforms you have to run into to make them go up. I heard Super Sonic can throw rings as well but I can't figure out how to activate Super Sonic... do I need a code or something?

Also I really like Knuckles theme in this... was that his theme in the PC version? I don't even know I never played it
T

I heard there's another Sonic game in development. Whether it'll be released in 2020 or 2021 or later, what it's about or what it's title will be are unknown at the moment. But it was mentioned earlier this year, if I remember correctly.
You must log in or register to reply here.
Share: Facebook Twitter Google+ Reddit Pinterest Tumblr WhatsApp Email Link
Top Bottom