LicoriceAllSorts said:
Maybe everybody asks Cloud why he's keeping his helmet on. It seems like a guaranteed way to draw attention to himself. "Who's the weirdo who won't take his helmet off? What's wrong with him?"
Click to expand...
"How is it that his hair is still standing up when he does take off his helmet?"

LicoriceAllSorts said:
I really love Tifa's teenage self-centredness, it rings really true. She'll do calisthenics with the old ladies but she doesn't have to like it. She's overconfident, ambitious, secretive, and will tell lies. She comes across as very real.
Click to expand...
I think I mentioned it earlier, but I agree - that Nojima's gotten better at injecting a kind of childishness / age-appropriateness for the characters these time.

I'm not sure if he put this amount of thought in her earlier CC/BC renditions though - those renditions of Tifa seemed to be childish as well, but in a teenager-interested-in-dating kind of childishness. Clearly her outfit choices wasn't because of Jasmine.

Crisis Core Ultimania said:
Believing in Cloud’s promise, Tifa’s waiting to see Cloud become a SOLDIER like Sephiroth. Tifa dresses herself in a pretty and sexy look. Does she do that to spirit up herself in preparing for a touching reunion?
Click to expand...
And I seem to recall that she tells the whole story of her promise to Player Turk, and sends Zack messages dreaming about a blond SOLDIER to protect her in a pinch. Seems quite incongruous with her current, more reserved character.
Last edited: Sep 12, 2021

#527
Tifa is bolder in the novella when it comes to Cloud too, asking Claudia about him on a whim for example, because she believes he's going to come. She's hiding her feelings from her dad (which is natural for a kid to do), but she's kind of desperate for any hint of Cloud since she doesn't have any news about him. So I can see her asking Zack, especially since he's kind of easy to approach and probably looks like the most normal between him and Sephiroth - and remember she wants news of someone who she believes has made it into Soldier.

Nomura did say that she dressed like that for Cloud, but I think that like with every time they come back to FFVII and the Nibelheim incident, they touch it again. Nomura's quote was always perplexing for players: "but if she dressed like that for Cloud, then why is she still dressed like that once she sees that Cloud isn't there?" is the kind of questions that have been asked even here. So it's good that Nojima went back and thought about a better reason. The characterisation in Remake is definitely better because they all thought more in depth about their characters too. Writing such backstories is a good reason to think about them and how they evolved/still have to evolve.

I guess that we'll have a long time before seeing the real Nibelheim event and how everything went down though, since it's definitely not in the next game, and probably not in the one after either. But I love how this novella alludes heavily to the whole sequence. You can feel how important it's going to be.

LicoriceAllsorts said:
I also won't be surprised if the Remake forgets about Chief Zonder and makes Brian Lockhart the mayor again.
Click to expand...
I know that at least one Ultimania states he was the mayor of Nibelheim but I don't recall it being ever confirmed in the game.. ? Or am I misremembering?
J

Chief Zonder is mentioned in that Trace of Two Pasts translation.

jeangl123 said:
Chief Zonder is mentioned in that Trace of Two Pasts translation.
Click to expand...
Yes, I meant if if it was ever confirmed in the game that Brian Lockhart was previously the mayor. It is stated in his profile in Ultimania Archive but I can't recall it from the OG

He introduces himself in Cloud's flashback with "I'm the town's ..." before recognizing Cloud and then acting like he speaks for the town ("We don't need the Shinra's help to protect our town!"). The Ultimania Archive only said what always seemed to be self-evident in the game.

And what else could he have intended to say to this dude he initially thought was new to Nibelheim? "I'm the town's resident sex offender"?

“I’m the town’s certified penis inspector. Please be sure to check in for weekly penis inspections (especially if you go anywhere near my daughter with that thing).”

This part was really hard for Peko to translate, because of all the feelings

#534
Orange is a surname that only someone who didn't speak English could come up with. I'm sure it works in other languages but it sounds incredibly odd in English. That said, apparently there are 14,000 people in the world with the surname Orange, and you are most likely to find one in the USA.

Orange isn't that weird of a surname at all, in English. I've certainly heard it before.

In fact it's apparently a British surname used by royalty in the past, and is the reason behind the naming of "Orange County" in the state of North Carolina.

This is Orange kid erasure 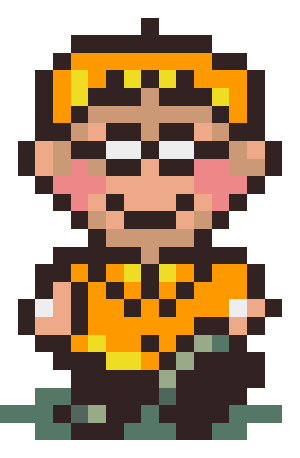 With royalty it was generally "of Orange" rather than just... Orange haha. I've never heard it before either, although Jessie Raspberry is weirder! Maybe they have a fruit theme going with surnames for middle-class Shinra families, since the Doctor was apparently from the plate.

#539
It's actually part of the surname of the Dutch royal family, "van Orange-Nassau" because one of their ancestors came from Orange in France. But it's still a very unusual colour surname, like calling someone Mr Yellow or Mr Purple instead of Mr Green or Mr Brown or Mr White.
F

Thanks @odekopeko and @Eerie for the translations.

I wonder how Nojima comes up with his naming conventions, since Rakesh and Damini are Indian....but have Dutch royal family surnames?

Shillong (Corel Doctor's name) is a city in India.

Anyways, poor Tifa. When I first read the summaries, I somehow imagined "Doctor's son" i.e. Rakesh to be somewhat shady, sinister character...but in reading this is sounds more like he is presented as if he's genuinely trying to help out, then somehow slid down the slope of being exploitative. Also, cos his mother's circumstances also went from top-sider to slum dweller. Rough, but also, kind of like real life.

Also, drawing linkages to the compilation, mayhaps Tifa was good at providing rehabilitation care to Cloud when he was a vegetable because she had to experience it herself.

I also really liked the links back to Aerith's story with references to the different slum Lords for each sector.

#542
Yeah I noticed too, it feels really cohesive. I also thought about Tifa's line "I want a shower" and you realise how that's been hard for her; she's had perfect hygiene and then has such problems to shower. I mean no wonder she's happy to be able to shower whenever she wants to.

I also was impressed by Nojima's research on the medical field, when he gave all those details, I thought he had done a good job

#543
I really appreciated how Nojima described Tifa's hardship. In particular, how much disoriented she is when she discovers the slums and gets her new home, following Rakesh around almost mechanically because that's the only thing she can do.
It feels strangely relatable - the physical pain and the weakness post-surgery, the inability to have proper hygiene while it was taken for granted, the loss, the confusion when treading in this alien place.... (I personally got to experience those, but thankfully, that was not all at the same time!). It's rough, but it feels real.
It will be interesting to see how she pulled herself back up.

#544
I'm also intrigued by how difficult she finds it to trust Zangan, and how quickly she reverts to her old suspicions about human trafficking.
A

I would definitely say that this is the best novel Nojima has written yet. It's so much better than his other stuff, especially the Tifa part is by miles more interesting than what he usually writes about lol

LicoriceAllsorts said:
Orange is a surname that only someone who didn't speak English could come up with. I'm sure it works in other languages but it sounds incredibly odd in English. That said, apparently there are 14,000 people in the world with the surname Orange, and you are most likely to find one in the USA.
Click to expand...
I really hope one of them works for the FBI.

#547
LicoriceAllsorts said:
I'm also intrigued by how difficult she finds it to trust Zangan, and how quickly she reverts to her old suspicions about human trafficking.
Click to expand...
Yeah it makes me wonder if there was some shady rumours about villagers disappearing or some shit she didn't tell because she really is easily distrustful. It's like the story of wolves eating kids or something they told their kids to prevent them from going to the mountain?

#548
Or maybe real human trafficking is something that goes on in a world ruled by unbridled capitalism?

I actually like the idea that Shinra puts about rumours of ~scary human traffickers~ to make the population distrustful of strangers or anyone unusual, like Zangan, so that Shinra (the ones actually kidnapping and disappearing people) seem like the safe option and the population then ostracises anyone opposing them. Or at least capitalising on those rumours if they arise.
K

#550
Don't think I've said this before, but thanks sooo much for the translations!